Presented to the general public in spring of 2021, Harley-Davidson new Sportster S models reached the dealerships in Germany in October of the same year. As with all previous Harley-Davidson models, Rick’s Motorcycles was one of the first to develop and offer a comprehensive parts program for the new Sportster line. Of course, a presentable Rick’s Motorcycles custom bike, based on the Sportster S should feature wider rubbers and the as many new ideas as possible! 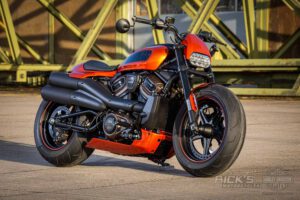 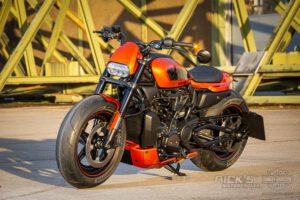 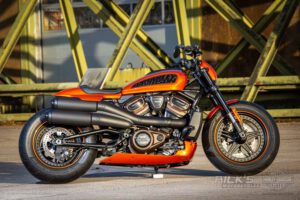 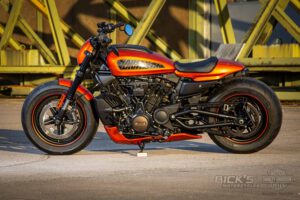 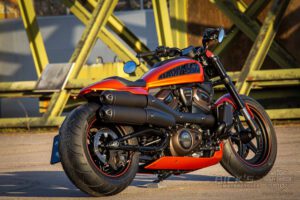 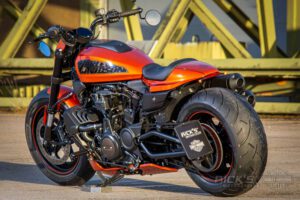 With the Sportster S, Harley-Davidson has created what is probably the sportiest Harley in the company’s history. Hardly to be outdone in terms of power and handling, it comes with its own sophisticated design, certainly to be highlighted as unique, standing out from the masses of new motorcycles, many of which look uniform for decades. The stock version already looks unique but nevertheless, there are a few details that ask – well, cry out – to be improved, and other components can be customized too, individualizing this ride even further.

A slightly wider rear wheel was a „must“ for a Rick’s project bike, emphasizing the massive look. As the Rick’s team found out, a 240 tyre would fit in the swingarm with a few minor modifications. And if you are already thinking about new wheel dimensions, a set of new design wheels should also provide an additional upgrade to the look. As one of Europe’s renowned custom wheel manufacturer, Rick’s already can choose from numerous designs in a wide range of dimensions. For this ground breaking project, the choice fell on the established „Apollo 5“ design in the three-piece assembled version. While the front wheel was chosen to exchange the stock wheel in standard size of 4.5 x 17 inches, the 240 rear tyre was mounted on a 7.5 x 16 inch rim. 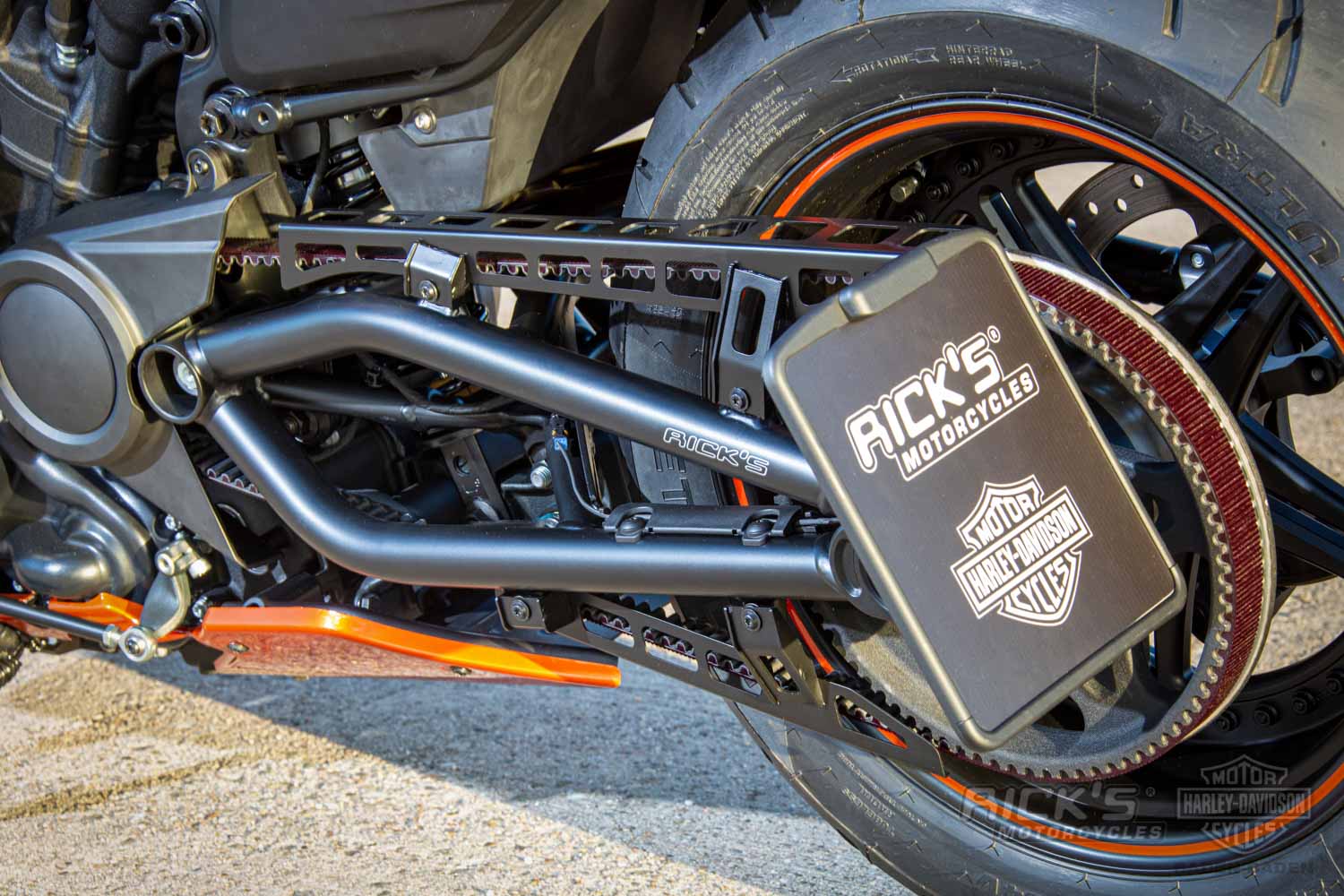 Who ever has seen the Sportster S, the stock massive bracket over the rear wheel – mounting the full packet of indicators, taillight and license plate – naturally was one of the first „targets“ of the Rick’s team. In fact, it was removed without further ado. Well, strictly speaking, it was dismantled without further ado but kept for the „archive“. Unfortunately, European road homologations procedures require aforementioned components for legalizing the bike, let alone riding safety. For the license plate, a new and sidemount bracket was developed and CNC-machined, offering a much better view onto the massive rear tire. The license plate itself can be slipped in from below, so that the plate itself has not to be drilled, adding to the „clean look“ of the tailed. 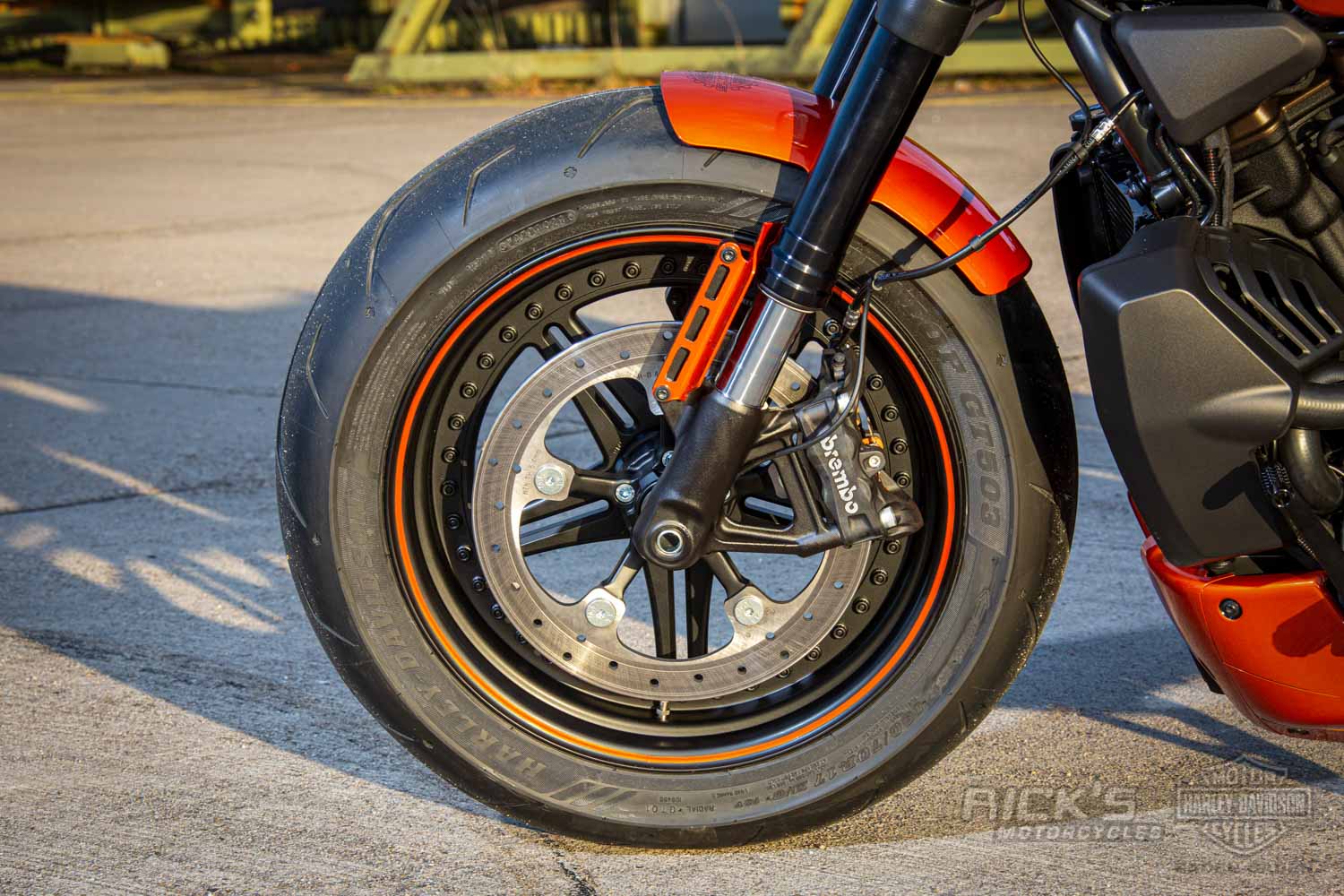 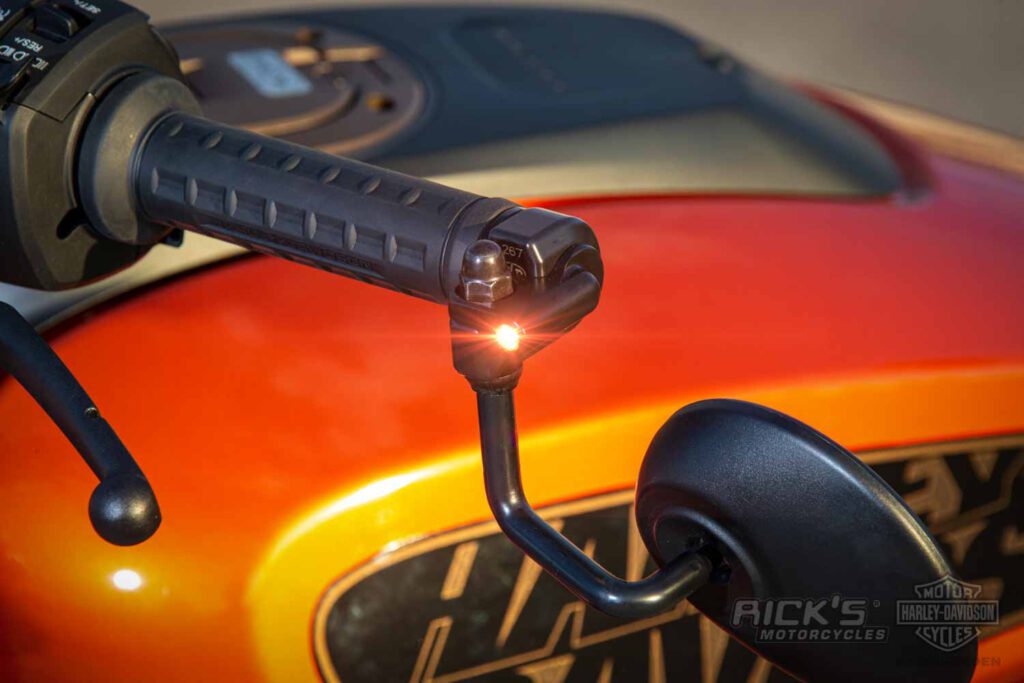 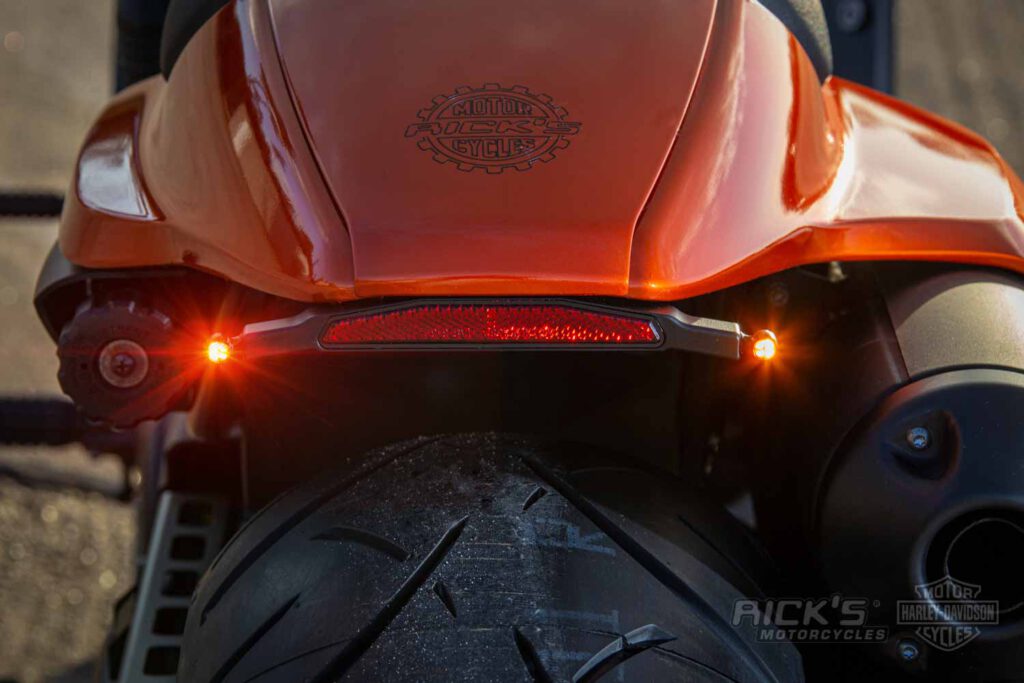 Customizing tail- and brakelight plus indicators, the Rick’s team again came up with „something special“, both in terms of practicability, easy installation and style: A specially designed bracket is „bolt-on“ installed to the existing mounting points under the stock tail section. A special made housing is attached to it, in which the rear reflector is integrated. Kellermann „Atto“ 3-in-1 signals are mounted to the sides. These clean and super-tiny parts feature the ECE test mark – and can therefore be used legally on the road.

Another new custom part is presented by Rick’s at the handlebar ends, since a particularly smart housing has been designed for the front turn signals. The established Kellermann „Atto Integral“ indicator can be used here with a precise fit and are also road-legal. Because the original plastic belt guard seemed a bit „unsuitable“ for such a high-performance ride, Rick’s has also designed a brandnew „stock-exchange“ for it. The front mudguard is a solid steel made Rick’s design. It is available in two widths and can easily be installed for the stock fender.

Rick’s has already adapted their footpeg range for the Sportster S, in this case using the stylish AK 4.7 pegs. The shifter peg was especially developed for the new Sportster, as was the headlight mask which upgrades the front end considerably.

The Rick’s team has no doubt that the new Sportster S will a great sales hit with Harley riders – and they are already working on other solutions to allow „customized“ adaption of the stock mass production bike. The „Race is on“ for customizing the Sportster S – and Rick’s is already ahead of the field, if not to say „Leader of the Pack“…