The “Rickster” has landed!

The unveiling of the new Sportster S in July 2021 not only hit the Harley scene like a bomb: Harley’s official dealers also saw the powerful new bike as a potential top seller – and a challenging conversion project for their workshops! As soon as the first bikes arrived in the showroom in Baden-Baden, wrenches and caliper were applied to take the bike apart and measure the dimensions. Well, figuratively speaking, because today’s evaluation work is also done at Rick’s Team by laser measuring devices with the highest precision. In a literal “Blitz Action” of all those involved in the project, the first, lets call it “optical weaknesses” of the then brand new Sportster S were corrected right away: The massive, if not oversized, license plate/turn signal/taillight bridge assembly hanging over the rear rubber, the mere presence of which was, to put it mildly, a “challenge to the eyes”.

The front series turn signals were also “shrunk” with the aid of new Rick’s brackets and Kellermann Atto indicators and the plastic chain guard exchanged for a – typical Rick’s quality – laser-cut metal exchange part. Additionally – because it’s a customary process in Rick’s sheet metal workshop – two options for filigree but “heavy metal” front fenders were created, while the CNC mills in the Rick’s machine park cut two matching three-piece design wheels in the well established “Apollo 5” design out of a full block of aluminum. The GRP lamp mask came on top to add some style at the front end – and the aggressive styled AK 4.7 footpegs (including matching shifter knob) were added from the current Rick’s product range. 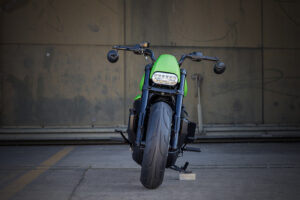 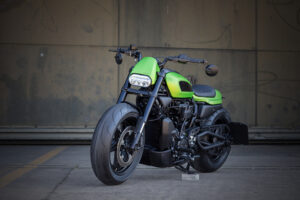 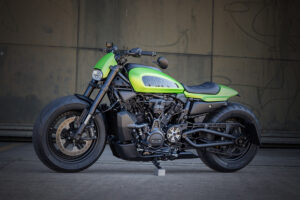 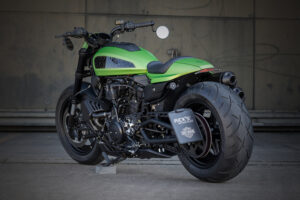 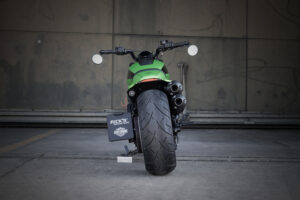 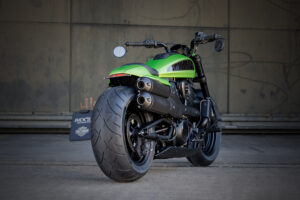 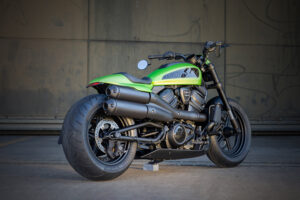 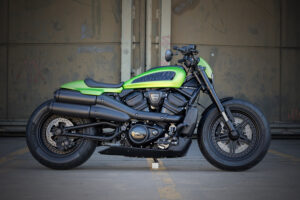 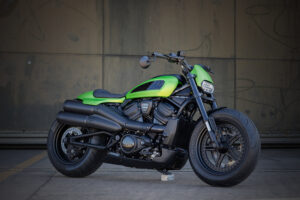 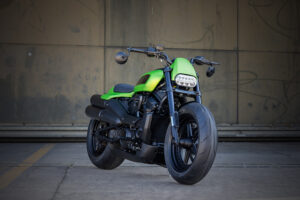 Perhaps it should be mentioned that the then appropriately named “XR 240” Custom was also given a much wider than stock tire – with a few modifications to the stock swingarm, but that’s what the Rick’s team is known for and appreciated worldwide anyway. This “first stage” of Rick’s Sportster S road rocket – set “ready to rock” onto two design wheels faster than some people can say “TUV homologation” – ignited the scene like a moon rocket, attracting orders already even as most “Sportster S” were still on their way to customers! Spectacular “Lift Off” for Rick’s then as now, as the basic modifications of the XR-240 were also the inspiration for the “Rickster 240”.

But anyone who knows the Rick’s team knows that this is not even the end of „exiting the launch tower“: First improvements were already incorporated in the prototype phase – and on closer inspection, other details also called for further refinement. While a “Saturn 5” only ignites the second stage at an altitude of 61 km, Rick’s had its customizing flame burning hot and hotter immediately after the project was launched: Within a very short time, the team developed another alternative and super-clean Kellermann LED-based turn signal option, designed and CNC-machined several design lines for wheel- and swingarm-axle covers, fork breather top covers, a new refined radiator cap and shock adjustment knob – and a stylish conical distance for the front axle. Small in size, but certainly parts that make a difference. In fact, Rick’s Motorcycles shocked the scene with both the speed and quality of the rear LED turn signal bracket kit, combined with the briskly adapted side license plate holders – within no time after introduction these parts have become the “standard” for “clean” Sportster S conversions. 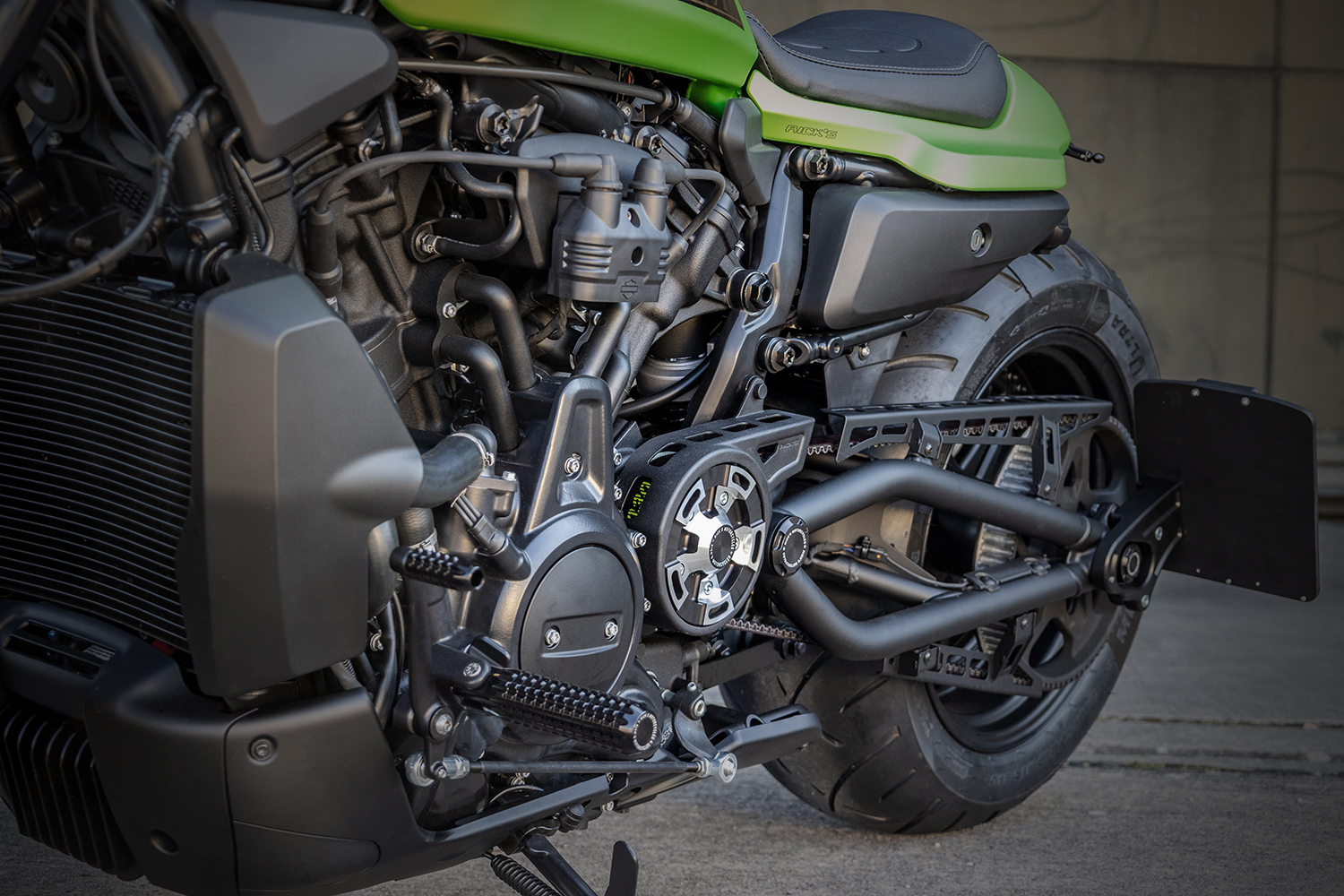 For those of you who are still familiar with the dynamics of the 1969-1972 lunar missions, the 2nd stage also brings the mission only “almost” to orbit. Both the last kilometers into earth orbit and the „translunar injection“ maneuver was performed by the 3rd stage. This “Stage 3” also took the longest development time at Rick’s, as a completely new solution had to be found for the Revolution 1250T motor, adapting a Rick’s product that had been in high demand and successful for many years: The open-rotating design pulley wheel at the transmission. This conversion option was ever-popular on the air-cooled Sportster models: instead of being concealed under the engine cover, the gearbox pulley rotates in a clearly visible but still securely protected fashion, highlighted with a decorative rotating cover, making the belt drive technology visible for everybody. And it wasn’t that easy to transfer this idea to the innovative design of the very advanced and sophisticated new Revolution engine case

For starters, belt and pulleys of the Sportster S are located on the left side, as on the Big Twins, and – let’s be brutally honest here: The left engine side of the “Revolution” is not exactly rich in visual “highlights”. Spot landing for Rick’s! However, the varying material thickness and mechanical stress in the engine case surfaces and motor mounting positions – the engine is, after all, an important stressed member of the rolling chassis – are so precisely dimensioned with variable wall thicknesses that every change and removal of material, even on such simple parts as engine covers, must incorporate these changes into the calculation. That’s why the Rick’s Sportster S Pulley front cover is , while fragile looking, in effect solid and sturdy as the stock construction: machined bi-color trim for the pulley, stainless steel cover, and all mounting hardware are combined in one complete kit. Rick’s typical: for the easiest possible installation procedure. 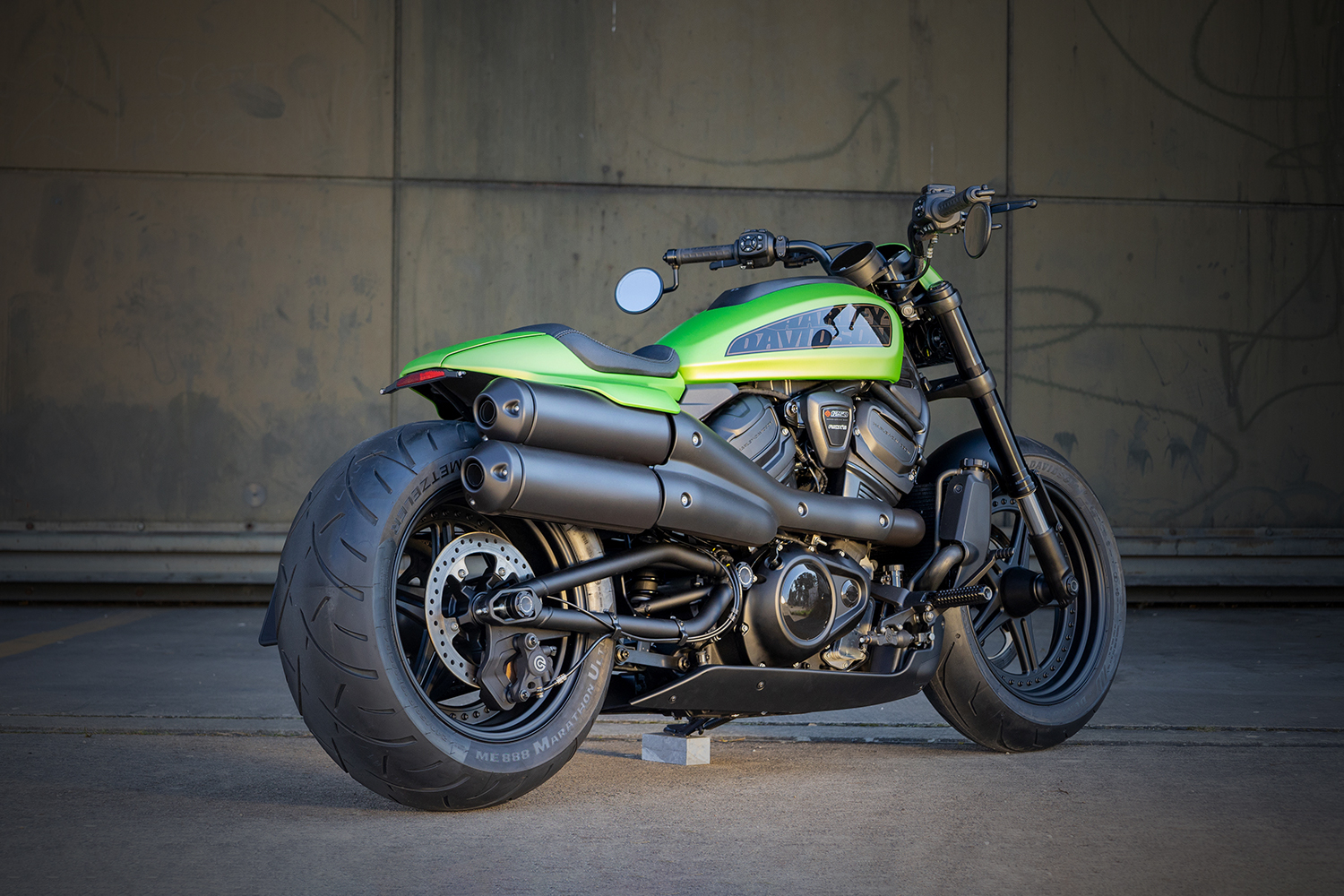 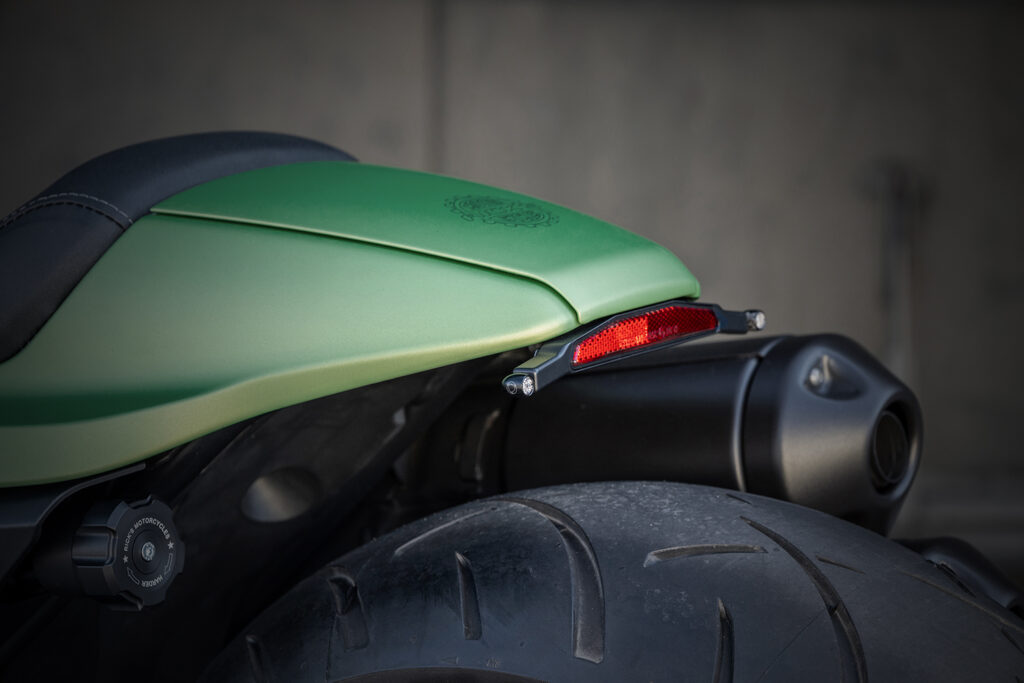 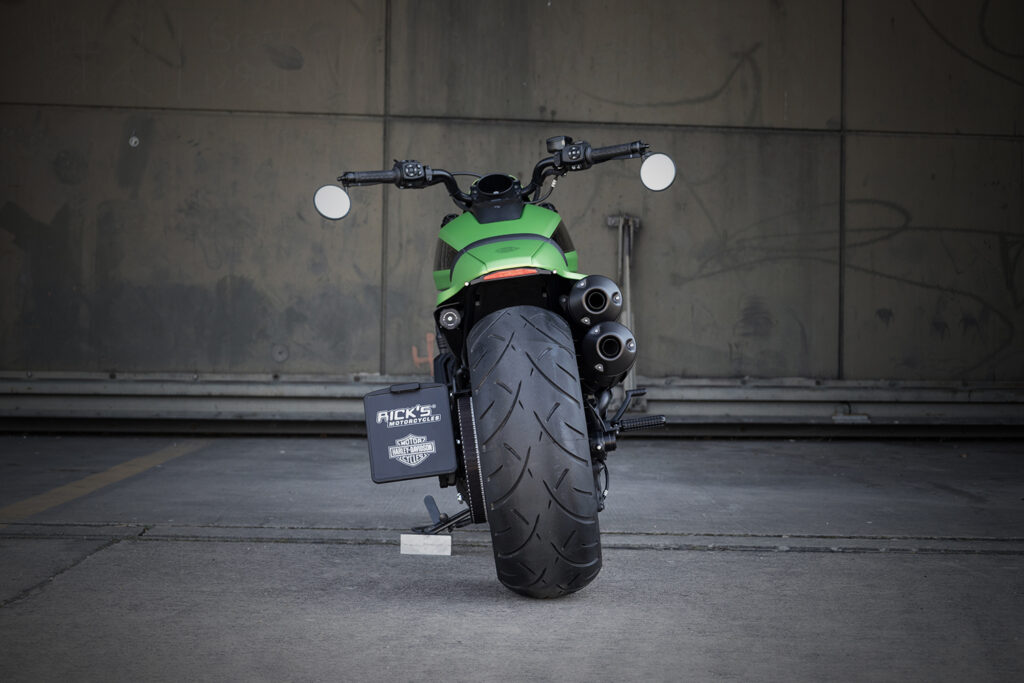 That this fine “Rickster 240 ” will also be the final stage of the journey is rather unlikely – the next “Customparts fireworks” are already in the planning. The only fitting conclusion to this project can only be this sentence and this sentence alone: “The Rickster has landed!”

Do you have any questions or would you like more information? »