Custom bikes – especially those with a higher downtube – are mostly converted into a comfy cruiser. Rick created this machine for his friend Tony, who likes such bikes, but doesn’t like cruising! It had to be a rigid chopper with enough power between the legs, where the tacho easily reaches over 200 kmh. Tony wanted a real sledgehammer with which to fly, and in Germany there are still motorway sections without speed limit, where he can live his dreams. The question is: would a Japanese Superbike not have been better for this purpose? Definitely, but firstly anybody can do this, and secondly, that would simply have been boring! 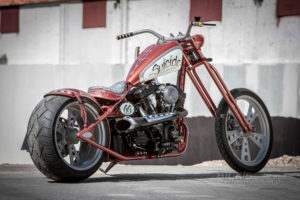 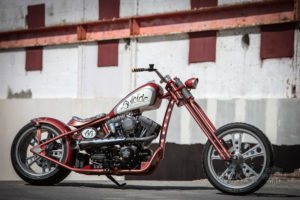 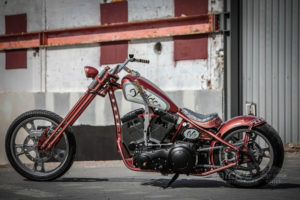 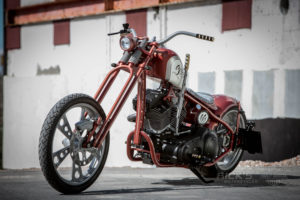 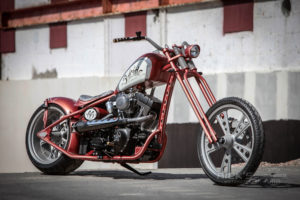 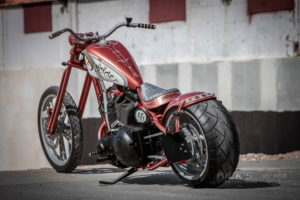 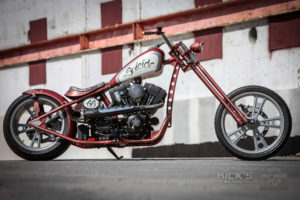 Only to race with a rigid frame gives the speed freak the actual kick he needs. There is after all a reason why the bike is called “Suicide”. But despite the fact that Tony loves speed, he is not a suicidal speed junkie, who only knows full throttle. But now and again, when the A5 between Frankfurt and Basel is clear, he likes to race and doesn’t give a toss about reasoning, despite increasing wind buffeting. The trick is really simple. If you’ve been riding without a fairing at more than 140 kmh, you know that the chin belt of the spartan jet helmet cuts off the air needed for breathing. While many would cut the gas automatically, Tony has a different strategy. At some point between 180 and 200 kmh, the wind blows so heavily into his face that a kind of nasal artificial respiration sets in…

When Tony approached Rick with his request, two minutes of silence followed. On one hand one understands such guys in Baden-Baden, on the other hand many initially unrealistic requests were realized before. Not least because friendship obliges, Rick agreed in the end to construct such a bike for his friend. The suitable rigid frame had been in the program for a while. The “Café Rodder” frame was used before and tested in other projects and can be considered “tried”.

Because the whole concept was anyway a bit crazy, there was no reason not to use a Springer fork as well, which had to be reinforced accordingly. The front end came from Redneck Engineering and was ordered 3 inches above the normal size. Remained the question with which engine to power the beast. Harley’s Twin Cam was chosen, which was sent to G&R for power increase, before being installed. The guys around Günter Sohn acquired their know-how on the drag strip, and based on that developed a Harley tuning kit which transforms the V2 into a potent powerhouse. This Stage-1 kit, an Andrews camshaft and an Altmann ignition bring out of 1,650 cubic inches proud 100 bhp, which should be enough for Tony’s sprints! 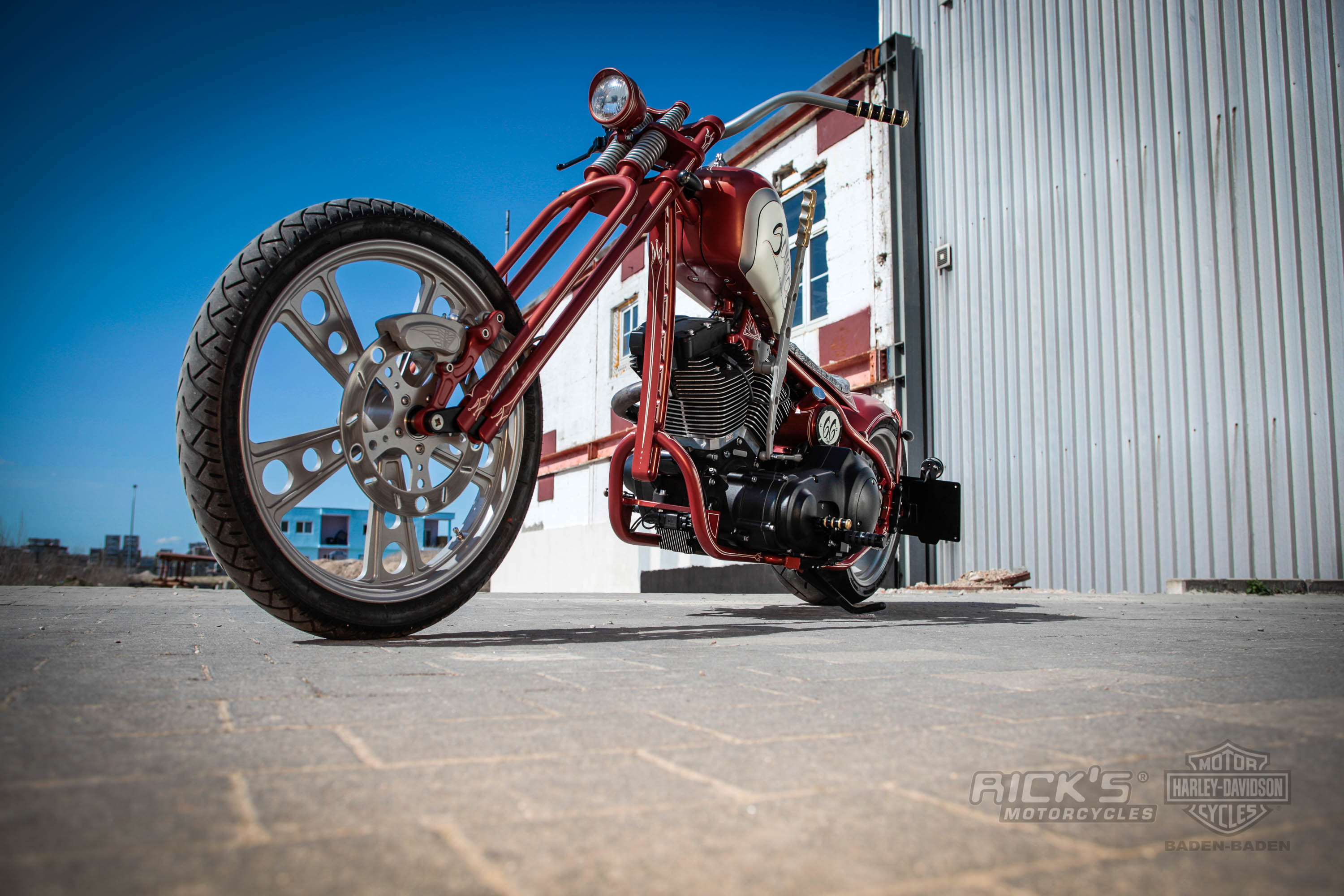 The question who gives the bike the suitable paint jo didn’t arise at Rick’s, as Wild Air Hörby is one of the leading custom painters at the “House of Custom”, who also painted this chopper. So, if you notice a rust red custom bike with a rider clinging to the handlebars grinning into the wind, then it’s probably Tony living it up! 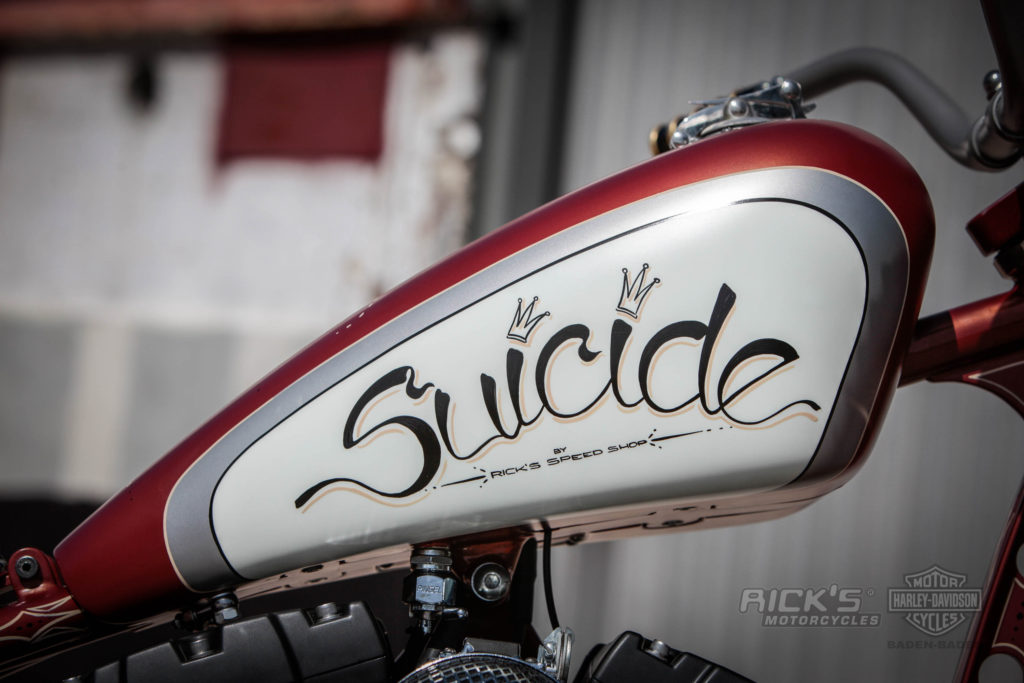 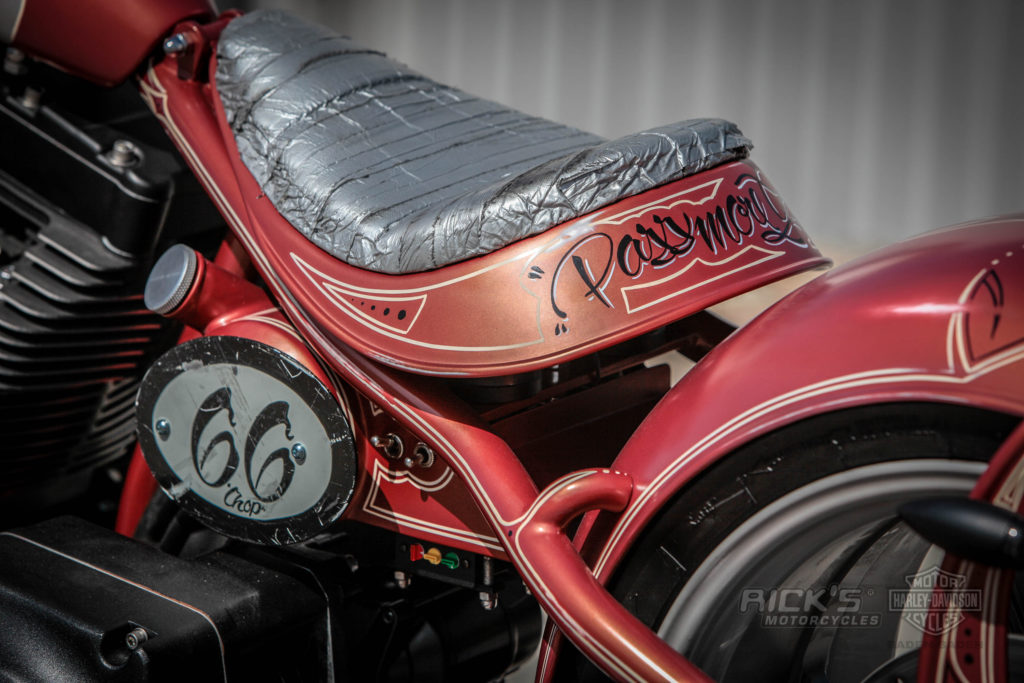