In 2014, with little fanfare for a Harley-Davidson model of such historical significance, the Dyna Low Rider came back into the model range. It was hardly noticed by the press and public, who turned their attention to the just introduced 750 and 500 “Street” and experimental electric motorcycles. Adding to this the at the same time introduced Rushmore Touring models, such a return can easily be overlooked! In 112 years of company history, and the repeatedly used abbreviations for partly further developed models of a series, it is difficult to say which model description is “active” presently. And customizers are anyway not fixed to a particular model year, they can transform any Harley-Davidson into a piece of art…like Rick’s Harley-Davidson in Baden-Baden.

For the 2015 Dyna Low Rider not even new parts had to be developed. 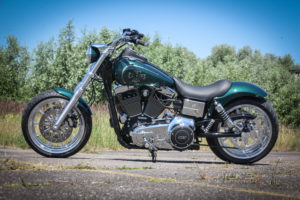 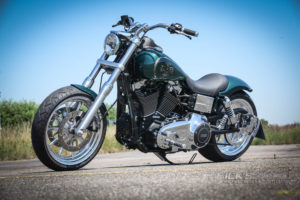 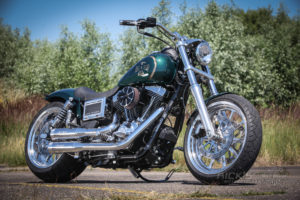 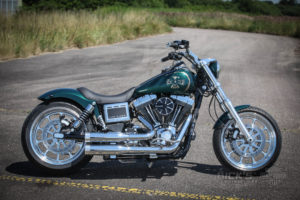 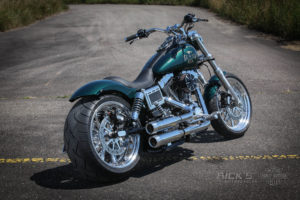 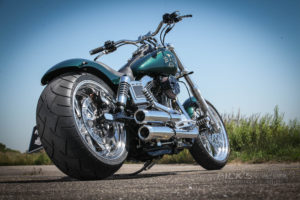 Daytona Bike Week 1977 was a different time in another world: the beaches parked full of cars, left in front of the promenades, and no skyscrapers to be seen along the whole coast. The Rat’s Hole Show was on the Boardwalk, not far from “Big Daddy Rat’s” T-shirt shop on Main Street, and the chopper mania was in full swing. Colourful and partly crazy custom bikes and trikes were parked in their hundreds at Main Street Pier, and thousands of visitors pressed the flesh during the spectacle. Seven years after “Easy Rider” and a little more than a decade in which the chopper and custom scene seriously developed, Harley-Davidson also realized the development and reinforced its engagement in the custom scene with the introduction of a new model in the middle of the current production year in Daytona during Bike Week. Willie G. Davidson who, after the success of the Super Glide, had an almost free hand in the design department for his developments, created with the FXS another Factory custom bike for series production. With a low sitting position, higher fork, slash-cut exhaust system and 9-spoke cast wheels, then sensational news. Today this doesn’t sound so sensational anymore, but in 1977 this bike caused a stir with every chopper fan. They even thought of the second set of forward control – ”Easy Rider” had arrived in series production. 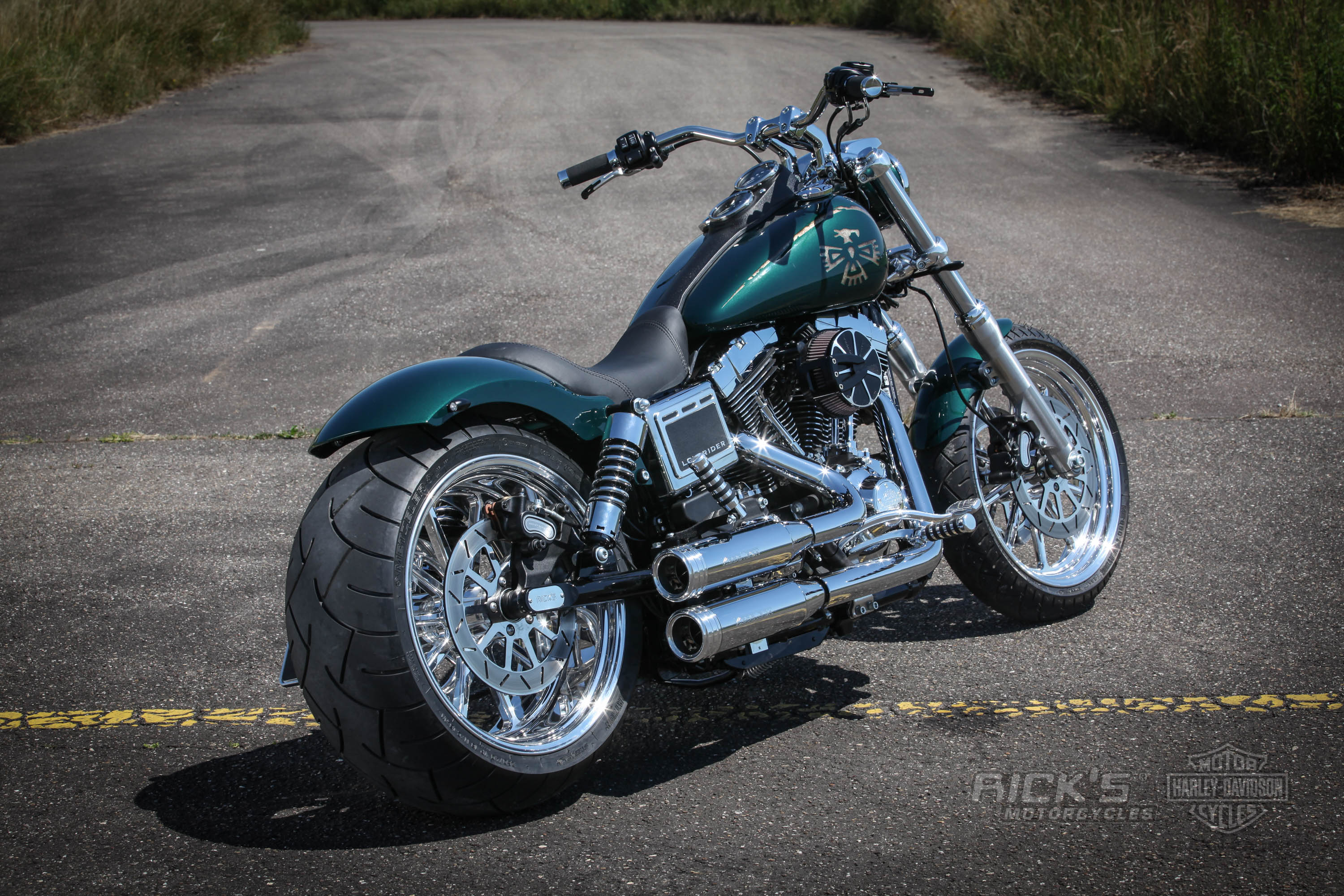 Daytona Bike Week 2014 was more hectic, larger – and the cars had been banned from the beach – but Willie G. Davidson was still there, and with him a new version of the old subject: after 5 years of absence from the model program there was a Dyna Low Rider again. At the same time the Sportster “Superlow” 1200T was presented and customizers had already converted the first “Rushmore” Touring models – and there was hardly any room in the magazines left for the new Dyna, for which there were already many custom parts in the accessory programs. Rick’s Motorcycles was at the forefront when in 2006 the FXDX Street Bob spectacularly revived the whole Dyna model series, and now also as official Harley-Davidson dealer in Baden-Baden stayed on the ball with parts development for Dynas. With the relaunch of the Low Rider it was not necessary to develop new components, all Rick’s Dyna parts fitted the FXDL. In late spring 2015 came the first enquiry from a Harley lady, who asked for a special conversion: an easy to ride, cool looking custom Harley with the Indian Thunderbird theme as paint. The basis model of her choice: a 2015 FXDL Low Rider. 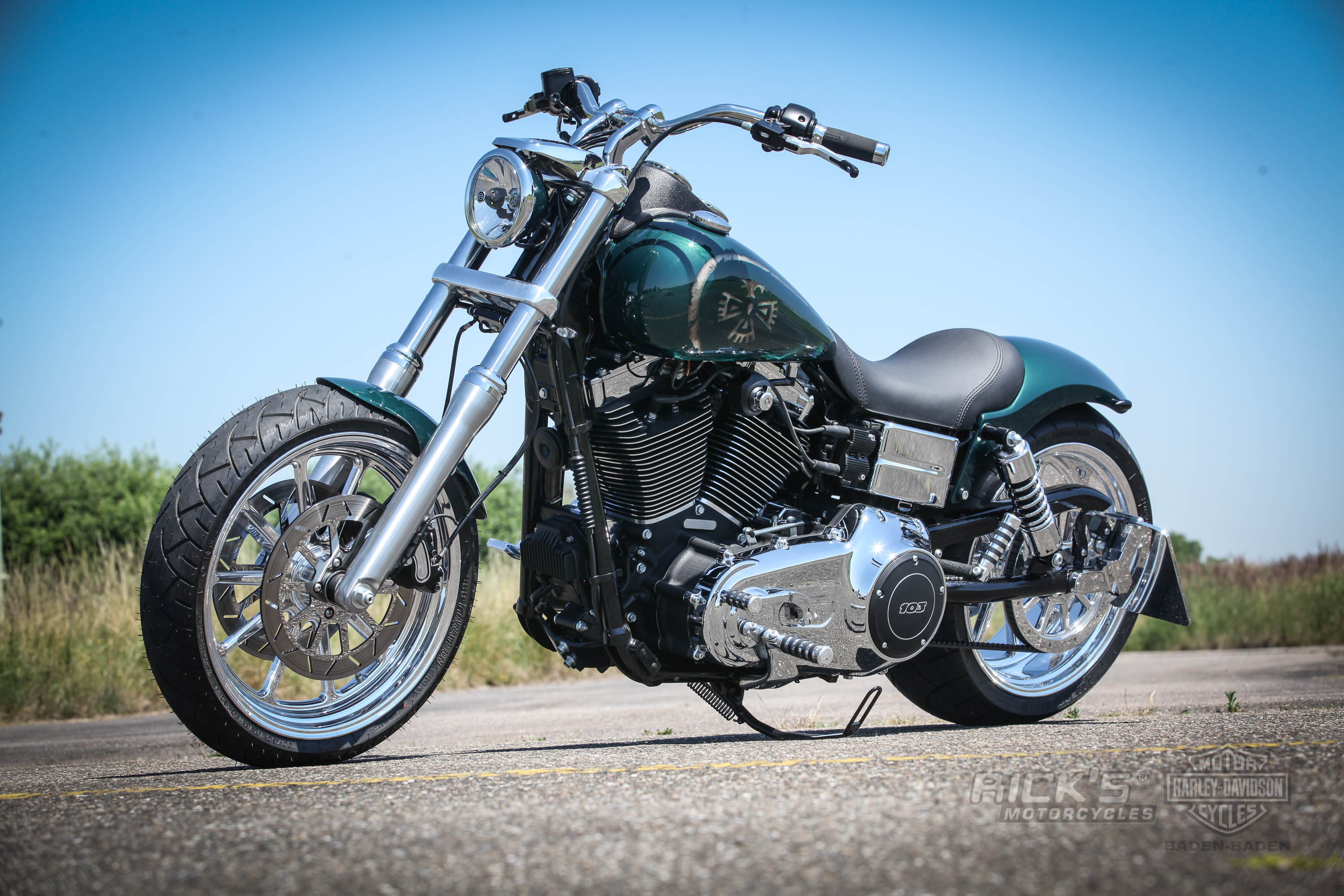 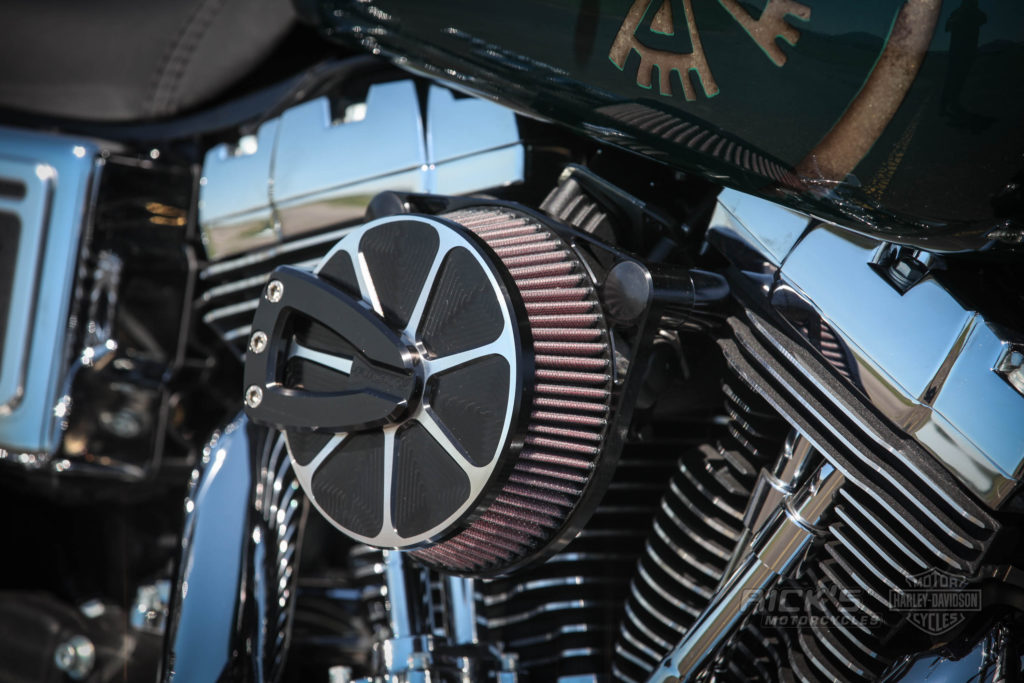 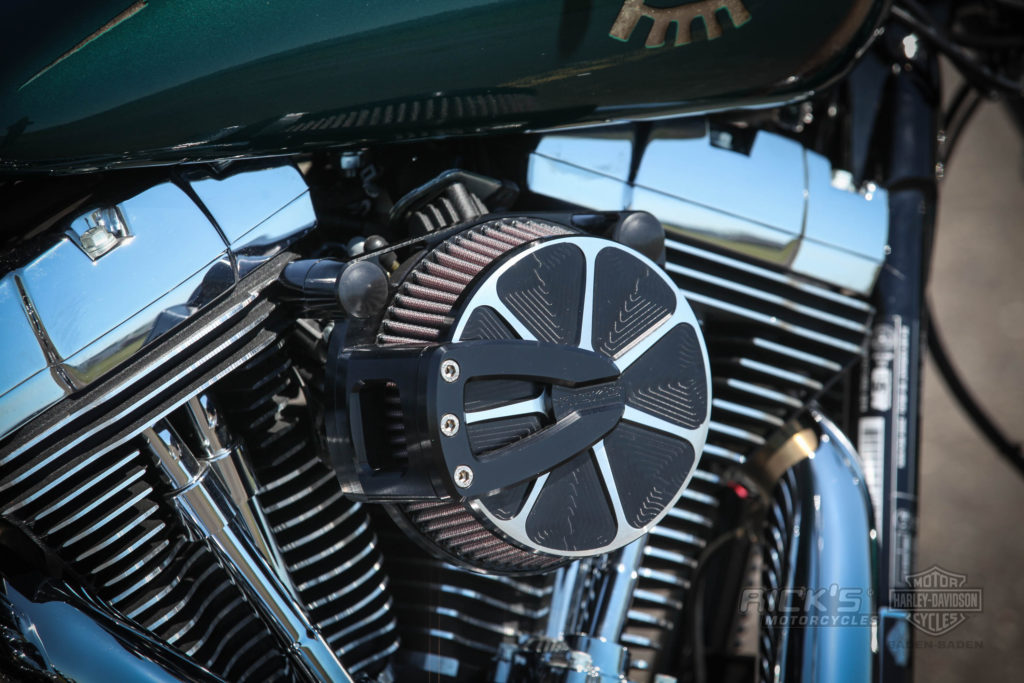 The combination of elegant “Rick’s style” with a fat rear with improved ride performance and a – compared to a stock Low Rider – lowered sitting position was no problem for Rick’s team. Shortly before 2.5” Dyna forward controls for taller riders were introduced, now to be complemented for the opposite requirement. Lowering of the bike was a combination of various conversion measures: a Progressive Suspension lowering kit at the front fork and Rick’s 260 conversion at the rear. Add to that a new seat from Uwe Kirste, inserted into the metal rear, with which several millimetres could be gained without reducing riding comfort. The foot controls stayed centred , with the stock items exchanged for Rick’s tried and tested billet controls with rubber rings.

A complete set of Rick’s “Steve” wheels with matching brake discs and drive pulley take the styling of the bike back where the journey started in 1977: the Shovelhead driven Low Rider then had new style 9-spoke cast wheels of a similar design. The stock combination of 17” rear/19” front tires was changed to rideable 18/18” – still enough rubber for acceleration and braking to be safe on the road. The latter is de by the stock brake calipers, which are more than adequate.

A wide handlebar and pullback risers allow optimal handling: all Dynas have the reputation to be accumulating the miles, and this converted Low Rider is no exception.

The 103 cubic inch motor is generations away from his ancestors; more power, more torque, more reliable and a longer life. In 1977 a Shovelhead had a rigid frame and took  its promised 60 horsepower from 1200 ccm/74 cubic inches. The larger 1380 ccm/80 ci motor was already being thought of, the first frame with rubber mounting of the motor in the Tour Glide not around for a few years. Today one can  “sharpen” the motor partly with a click of the computer mouse – the HD Supertuner adapts all adaptations to Rick’s “Good Guys” air filter and the adjustable KessTech ESM-2 exhaust system.

While today’s stock horsepower – 75 of them in the Twin Cam of the Low Rider – seem to be only slightly more than the 60 hp of 1977, the difference is in reality much greater.

Just ask a Shovelhead owner when he still rides a 74 ci in stock set-up!

134 Nm torque, available at the slightest turn of the gas grip, catapult the modern 103 ci forwards – and that at a performance maximum at 3,000 rounds per minute! This Low Rider was meant to be moved in a quiet and slow manner, can, however, be fired off like a rocket in seconds.

While a few model groups stayed stock, Rick’s improved all those parts which are vital for safe and comfortable handling of the power package: adjustable hand levers and Rick’s hand grips which, with and without gloves, in sun and rain – ensure a safe grip.

Details like the side-mounted licence plate and Rizoma’s tiny “Bullet” indicator at the rear, which act as rear and brake light simultaneously, add to the clean look of this conversion.

Top airbrusher Marcel Sinnwell received the order to paint the striking “Thunderbird” motive onto the base paint in British Racing Green. The “Thunderbird” theme and hand-drawn decorative pinstripes are a real master piece, and the cleverly positioned shades and lights let the bike appear almost three-dimensional. The motive is taken from a piece of jewelry, and the Thunderbird comes from an old Indian tale: a mythical bird of which many Indian people believe creates thunder and storms with its wings – and with the storms in the prairies of the American West always present – if you ever witnessed such storms – even in a car and with all the knowledge we have nowadays about storms – you can understand the myth. And to be honest: is there a better motto or theme for a custom Harley than a “Thunderbird”?