The wolf in sheep’s clothing could not look more harmless.

OK, Rick’s customs have a sharp look and stand out because of their wheels, but what the team from Baden-Baden did to the machine shown at Lake Faak in 2004 breaks all records of what has been seen on German roads before. A V-Rod wth 160 bhp, measured at the rear wheel (!) and electronic gearbox. A drag bike for every day use with which to get a quick start at the lights! Trimmed to the highest performance in the USA, Rick’s offers the power injection for the V-Rod also now here. A power increase with consequences: this V-Rod is fun to ride…devilish fun!

In 2004 the sun shone for Harley riders around Lake Faak, despite the week before the first snow settling on the Alps.

The European Bike Week at Lake Faak is becoming more and more a mega spectacle for the custom scene – and the bike premieres are many during this weekend. Rick’s also showed the best customs from the House of Custom, and not only on the stand, but also in action around the lake. European Bike Week at Lake Faak has become a tradition for bike premieres. 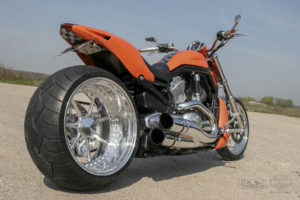 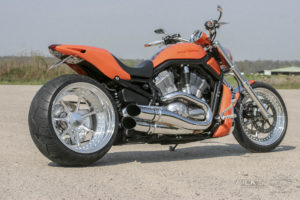 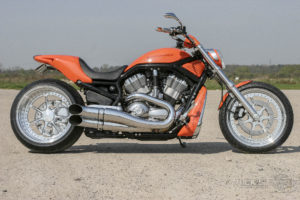 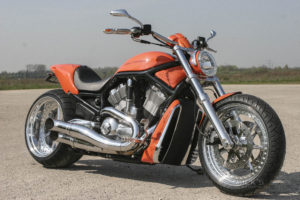 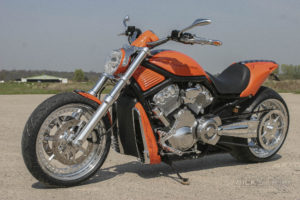 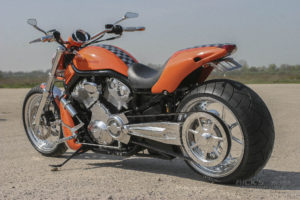 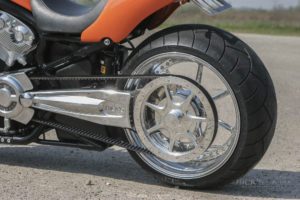 Then the machines were taken to the USA in January 2005. At the V-Twin Expo in Cincinatti the V-Rod with the wide tires was much noticed in the bike show presentation at the entrance, and Rick left the bike with his American partner in order to give the machine a small performance boost, and after Daytona Bike Week the bike was ready: pimped up to 1,550 ccm with new pistons, altered heads, cylinders and injection flaps, not to forget adjusted cam shafts, ignition and power curves, the power package registers 155,4 bhp on the test bench at the rear! A riding sensation which has to be experienced to describe it. The torque surpasses at 3,750 U/min the 135 Nm (100 ft-lbs) line and remains there until just above the performance limit of 8,000 U/min. The maximum torque moment is at 112.8 (152 Nm) ft-lbs. An awesome front drive is the result, which is even further improved by using the electric shifter. As with a dragster, the 5 gears can be used without reducing speed or pulling the clutch: a push of the button is enough! An “electrifying” experience in the fullest meaning of the word!  Two push buttons next to the left handlebar instrument enable using the gears without using the foot, but the normal way of changing gears with the clutch and gear lever is always also kept as an option on any conversion. Start still functions with using 1st gear and clutch, after that you can forget the clutch: just keep the speed and select the gears with the button…never did you reach 180 km/h that quickly, and the 180 bhp (applied to engine performance) of Rick’s Power Rod are good for more than 200 km/h – how fast depends on the condition of the rider. Switching down also happens with by pushing the button, optionally with or without using the clutch, whereby especially in the lower gears the clutch makes sense. Other than in dragster sport, where compressed air shifters are used, this switch function is electric when the key is turned in the ignition. Without any problems. The switch unit is above the foot controls and steers the switch lever via a lever joint. The normal foot controls can also still be used. When pressing the button on the handlebar, an electric drive transmits the switching pulse quickly and exact and engages the gear. During the switching process, the ignition is interrupted for a small moment, when the actual switching process is carried out on the gear flanks, which protects the transmission gears and works in both directions. During the test ride the electric shifter convinced especially with the speed of action. In seconds the gear is engaged, the torque remains at power performance and catapults the motorcycle with every push of the button further ahead. Never before was it possible to experience the drag racing feeling so close up!

With immediate effect, motor tuning is now also being offered by the “House of Custom” – although so far without TÜV.

The bike is back from the USA and now has to be registered and emissions tested. That reliability hasn’t suffered under the additional power this Rick’s V-Rod has proven: after all 277 test bench runs with over 600 test bench kilometres ae a sign of quality – also for the Rick’s chassis components, which passed another test with excellence. Fact is that the performance of the bike is partly due to the fact that by using Rick’s wheels and pulley also the original cush drives can be used, which means the brute performance is being cushioned and the life of the belt increased. In the latest generation also the inner shapes of the pulley for accepting the cush-drives were optimized, which reduces the wear and tear of the rubber dampeners. The demand for the V-Power power-boost is now already as large as the demand for Rick’s V-Rod wide tire kits. 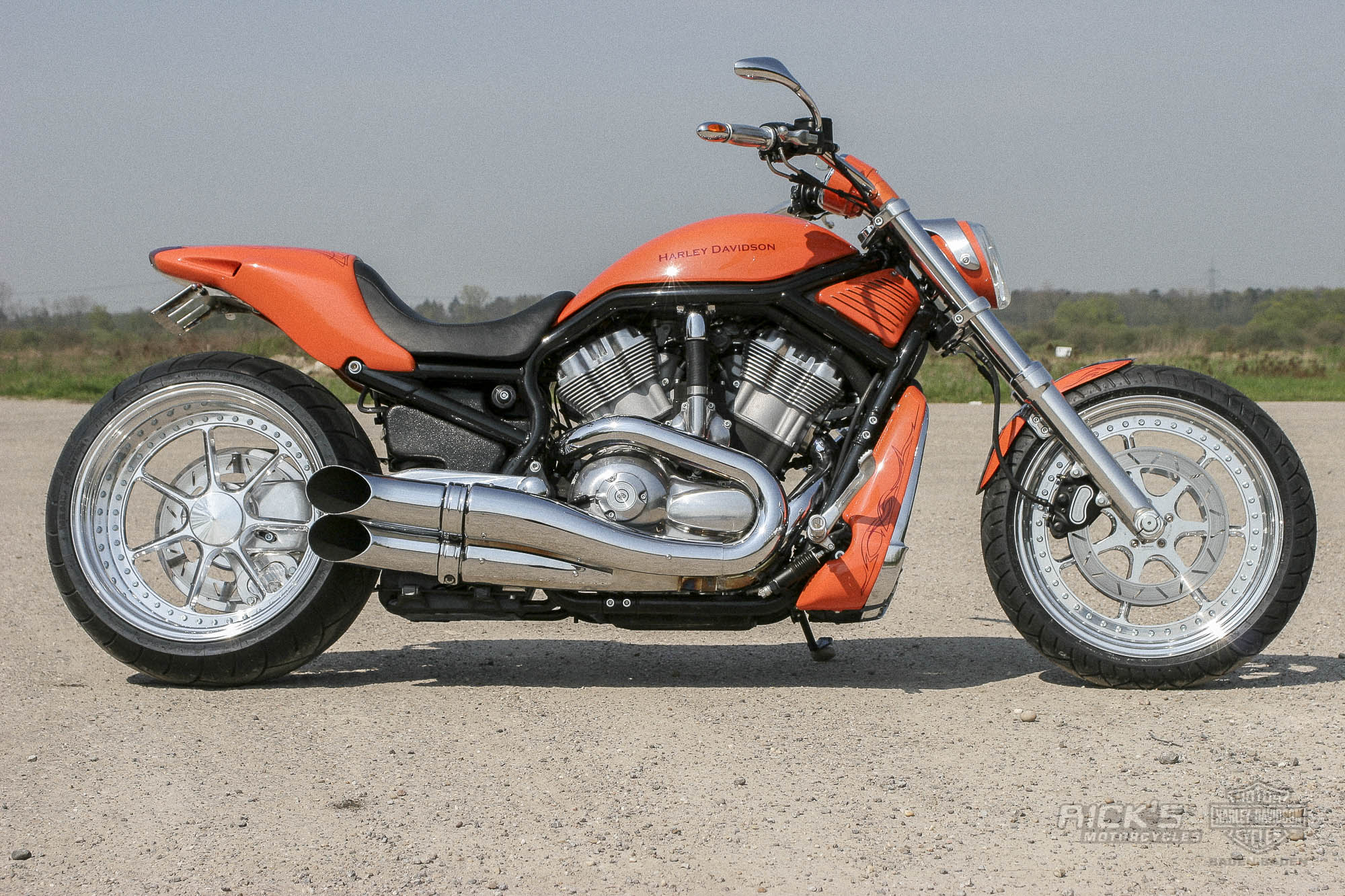 From the viewpoint of a safety engineer the 280 Metzeler has to be an epiphany: a larger surface means better power transmission on the street, more surface for breaking power and more rubber sticks to the asphalt in bends when cornering. Not that it matters on such a low cruiser as the V-Rod. By the time Harley’s strongest bike touches the ground, it has scraped the foot controls and half the exhaust. In this sitting position the cheeks are more likely to scrape the ground than the knee. But if you want to show the rear wheel to a Japanese bike at the next lights, the additional rubber works well. Just imagine this engine in Street Rod: more ground clearance at 180 bhp – infernal. Rick’s comment: Wait and see!”

Any doubts about the performance of Rick’s V-Rod’s wide rear tire are put to rest quickly: with the experience of various wide tire conversion test rides under their belt, expectations are kept low and critical. But the chassis of the “Power Rod” showed the full potential of a perfectly made wide tire conversion: the bike is so stable as if guided by a laser, and at any speed one can let go of the handlebar. No drifting into another direction, no reaction to bumps in the road or other unevenness. “We have placed a lot of emphasis during development to have the 280 tire on the rear wheel run centered in the swingarm,” explains Patrick Knoerzer, boss at Rick’s and in charge of product development. “After showing customizers an easy way to mount a 240 Metzeler into the stock swingarm, we knew that this would not work with the even wider 280 tire.” Luckily since end 2002 the special swingarm for the V-Rod was being developed: a masterpiece in terms of design and technical engineering – and made for the flowing lines of the V-Rod. 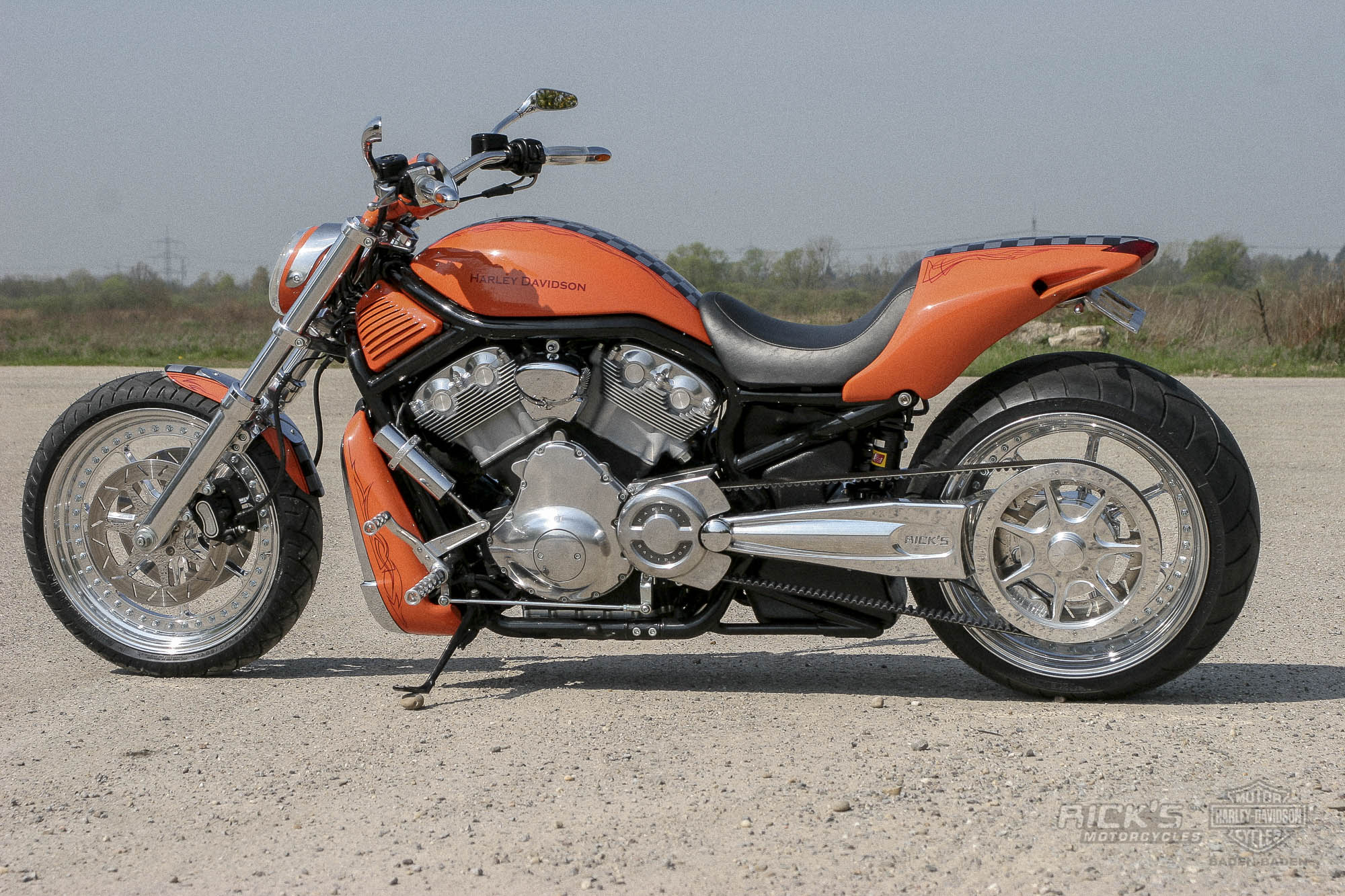 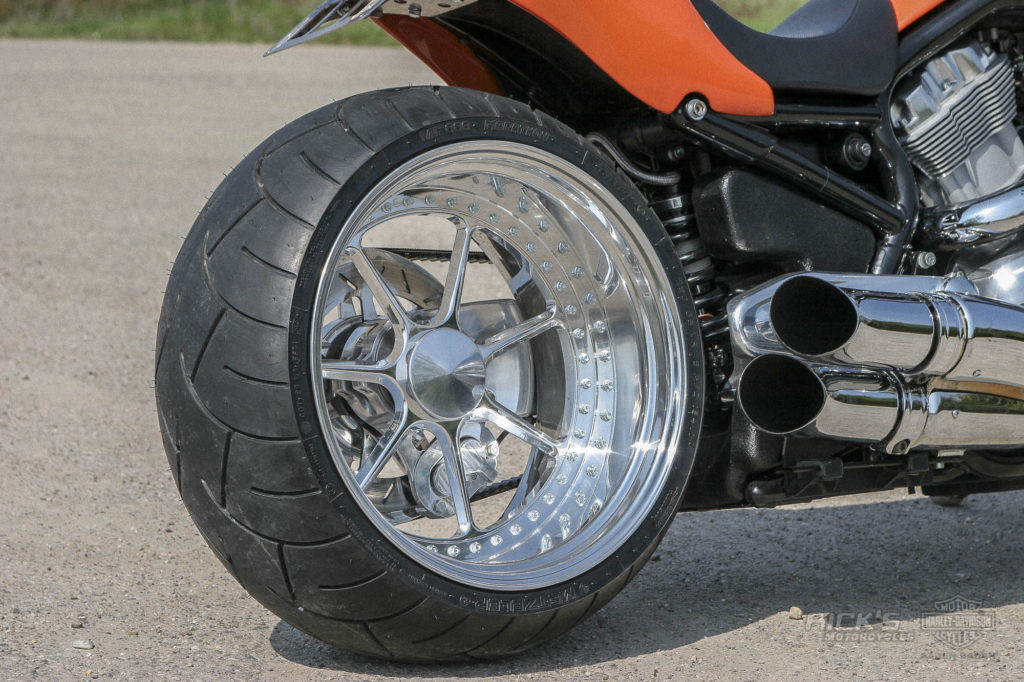 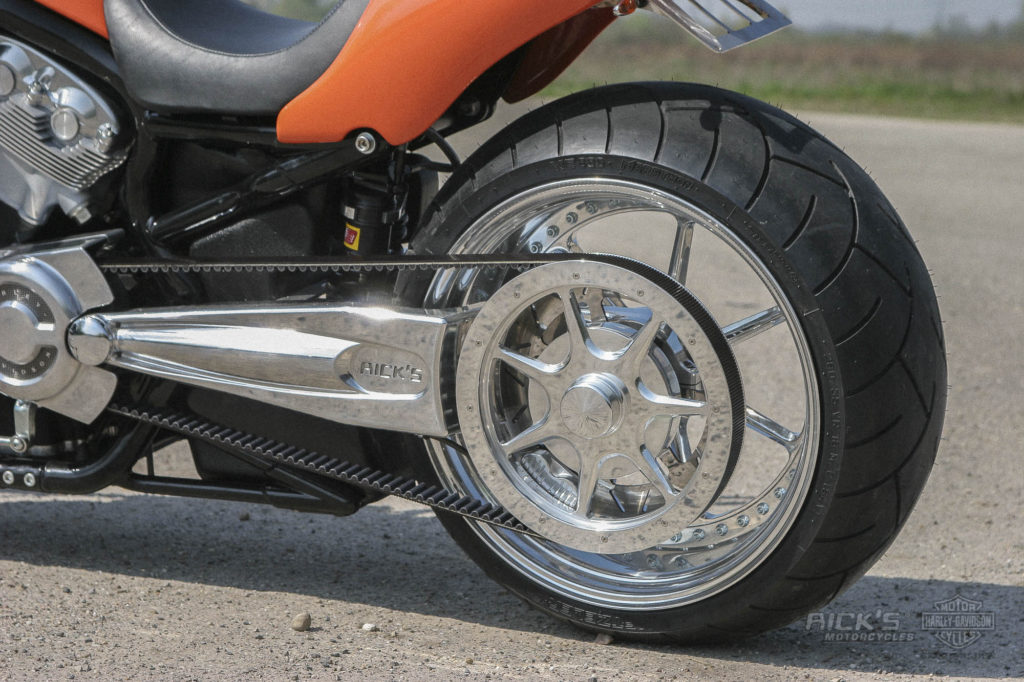 “The new rear wheel swingarm gave us the possibility to center the rear wheel exactly and to realise our technical plans,” explains Rick. Part of this is the hidden “Side Drive Brake System” rear brake hidden on the drive side, which leaves the right wheel side completely clear.

The brake caliper and Rick’s 11.5-inc brake disc disappear almost completely behind the belt pulley, and the belt remains at stock width and is not – as with other companies offering conversions –  cut down in size. The offset necessary for the centered drive is achieved with a wider drive pulley on the engine. This renders any (expensive) modifications on the frame or motor superfluous, and the conversions costs remain affordable. If you had any doubts about a front support bearing, then at 180 bhp motor performance you will be convinced this is a good idea: the support bearing can be heard working. The additional bearing causes almost 5 bhp loss of power from the crankshaft to the rear wheel, but without the bearing the transmission shafts would distort when accelerating. The wheels are the well known “Super Steve” with 20 finely machined spokes, which have many combination possibilities: coloured rims with polished stars. Mounted in the black rim bed, it achieves a custom look, usable for many styles – no wonder that Rick’s wheels can by now be seen on custom bikes all over the world, and “Super Steve” wheel sets are found all over the globe. For the V-Rod Rick’s offers a complete kit for “fattening up” the rear part: in addition to swingarm and a set of wheels one definitely needs a wider rear fender, which is available at Rick’s with the LED rear light, or the whole Rick’s Streetfighter rear for the V-Rod, which gives the bike a completely new shape! The front fender can also be exchanged against an accessory part from Rick’s. Otherwise – apart from the Superbike handlebar and new instruments – the chassis remained largely stock. After a few minutes on the Power Rod, you look for the next straight to be able to turn up the gas and use the gears electrically…and the adrenaline level rises.

In bends the chassis performs neutral, has no tendencies to lean into the bends and can also easily be led out of the bend. The additional tire surface on the asphalt can be noticed positively when accelerating out of the bend as the power is better transmitted onto the street. With the 280 tire on a 10.5-inch wide Rick’s rim the offered power can be used better and more safely without sacrificing running straight and handiness.

Customer requests are always welcome and who wants extreme tire widths on the V-Rod can with a 11.5-inch rim also have a 300 tire and with a 12.5-inch rime even a 330 tire at the rear. With the power injection and the electric shifter, the V-Rod is transformed into a drag bike for everyday use.