A lot of things have happened since when in the year 2000 the V-Rod model series split Harley enthusiasts into two camps…into the air and liquid cooled fans. 17 years after the introduction, the power cruiser not only had a firm place in Harley-Davidson’s model series, but had been accepted by almost all followers of the brand as well. Increasing emissions limits and rules, but also less demand outside Germany, has led to the fact that this era ceased in 2017.

Not even of age, but in the company’s history this is a relatively short time. But we don’t want to make an obituary here, but instead show what Rick’s Motorcycles made out of the V-Rod and which parts are still being ordered for the many VRSC models which run on the roads of this world. In order to move around on a motorcycle in the first place, it needs wheels, and in terms of design and production, Rick’s Motorcycles is an expert. For this conversion, ‘Super Steve’ design spoke wheels were chosen, which have black powder-coated rim beds and polished rim spokes. The design of Rick’s brake discs was of course matched to the wheels, and the rear wheel sits in a special swingarm, which is a machined custom part from Rick’s Motorcycles, specially developed and produced in small series. In addition, Rick’s offers a drive side brake system, which was also mounted here. With that the brake disc is immediately behind the pulley on the left side of the rear wheel and the right side offers a clear view onto the design wheel. 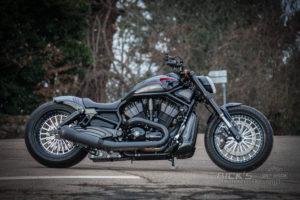 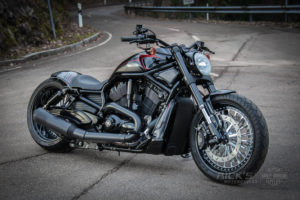 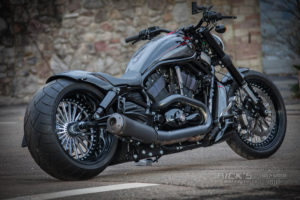 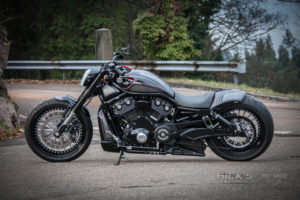 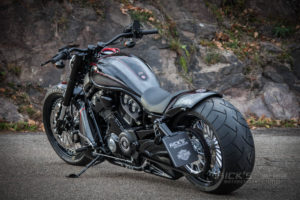 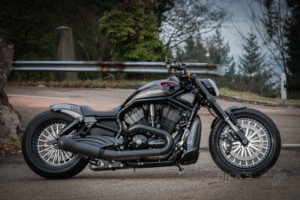 The chassis parts, like the front fender, the airbox and the rear fender, are also components Made by Rick’s, which are worth being looked at closer. The front fender has been kept short and is attached in the stock location.

Where other motorcycles have their tank, the V-Rod only has a mock tank, the airbox. The actual tank is under the seat, and Rick’s airbox cover is a perfect fit exchange part made from plastic reinforced fiber. The cover used here is in the program under the name ‘Street Fighter’ and has additional side air intakes which have a fine mesh cover. Cut-outs have been inserted into which the instruments are placed into the center. 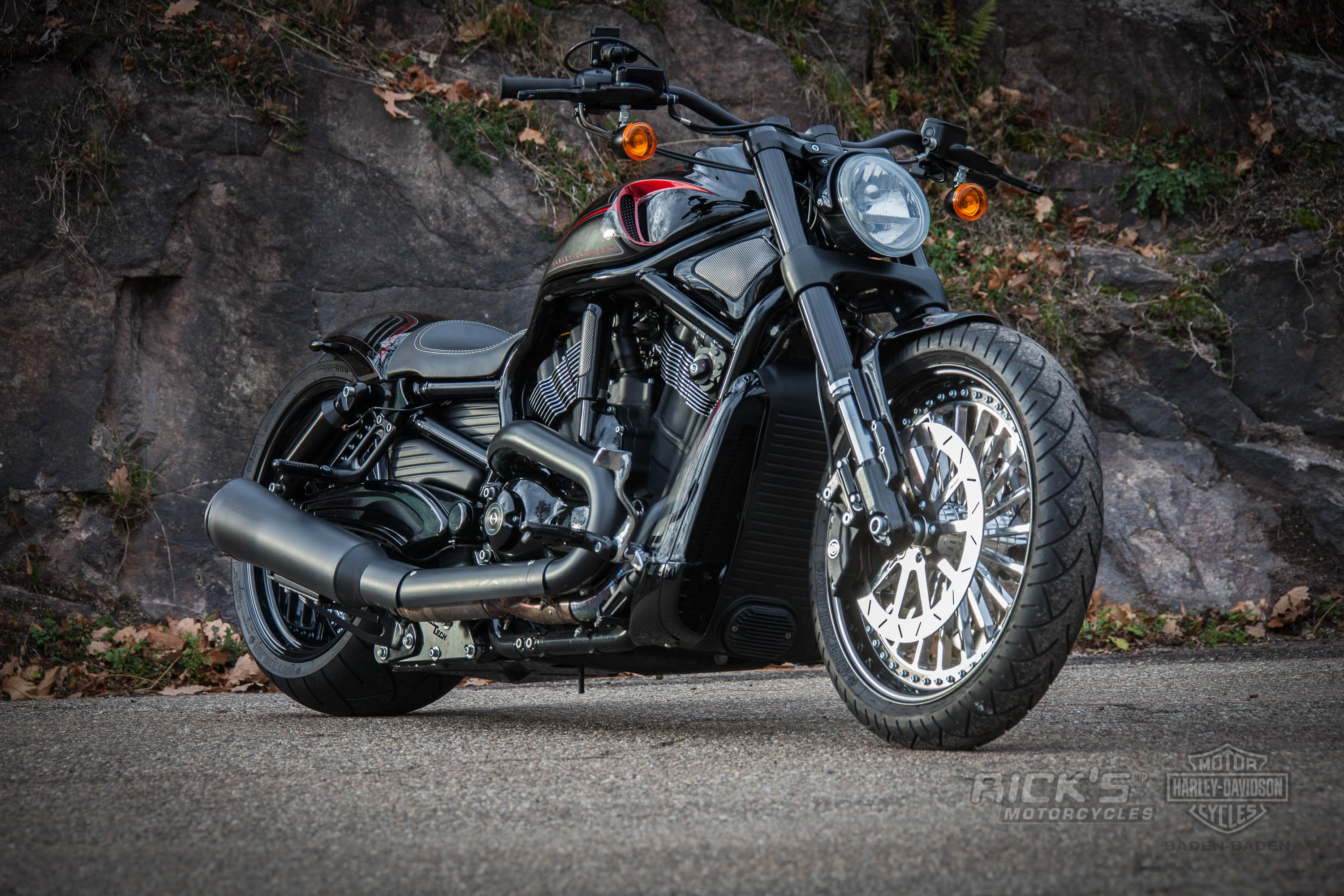 Finally, looking at the rear part, this is also a kit from Rick’s and supplied including a seat base plate, made by Rick’s from high-quality plastic reinforced fiber, also still available today, either for 240 or 280 tires.

Rick’s Motorcycles is, of course, glad that the homemade custom parts for the VRSC models are still in demand, but with a tear in the eye for this era, it is hoped that the Company will soon present  a further model of another power cruiser, which can then be customized with similarly beautiful parts! 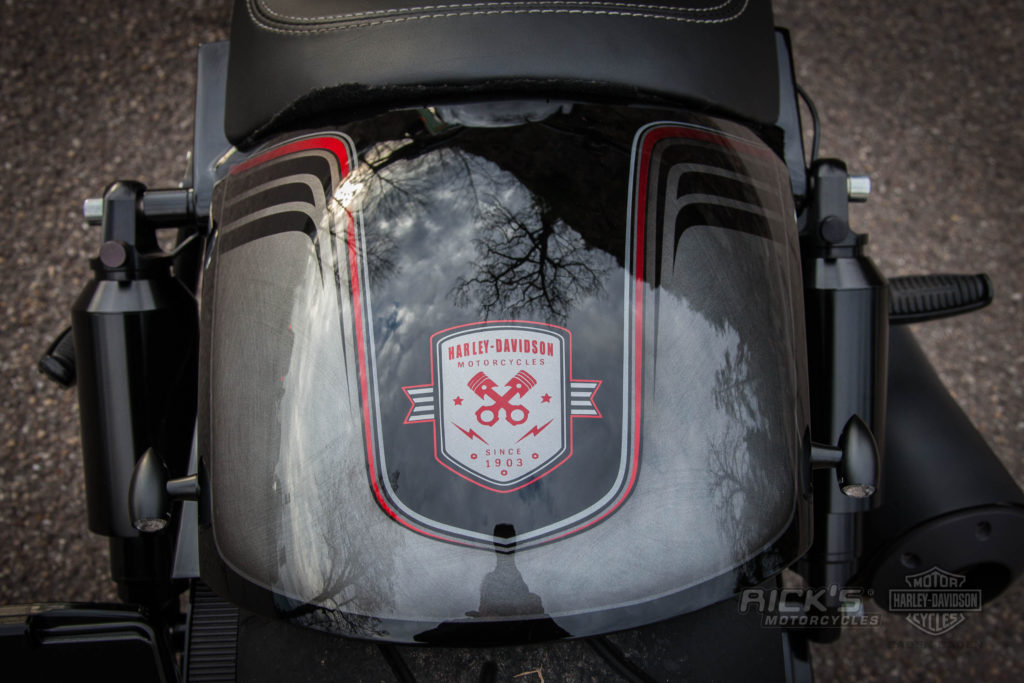 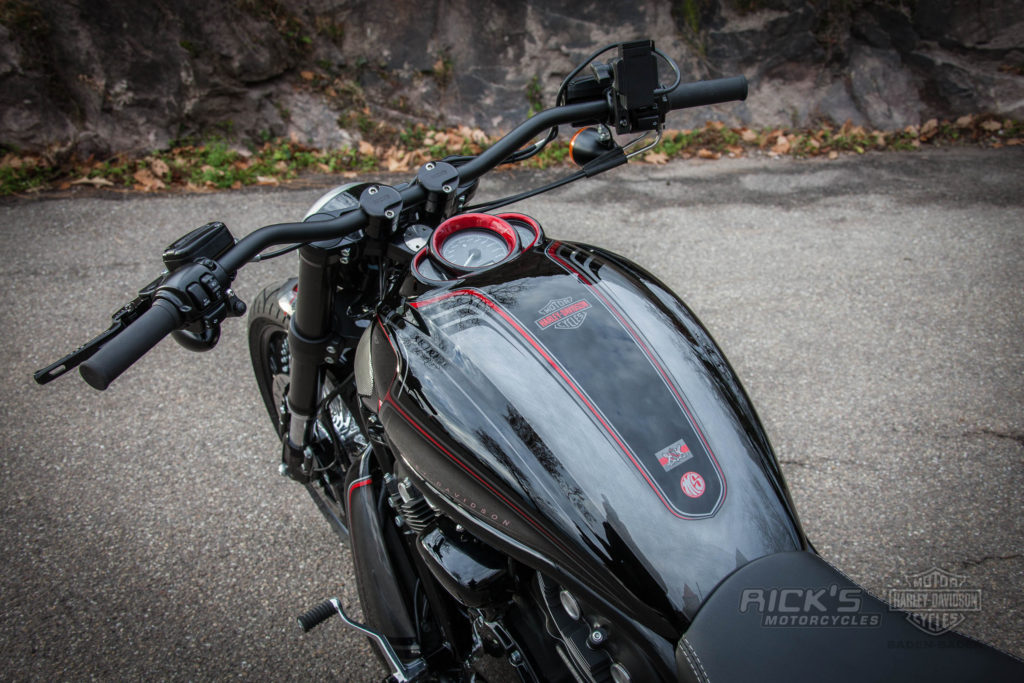