The continuing fight for the widest rear tires reached a new dimension in spring 2003: the Metzeler 280 was the winner so far, and it took a long time for something wider to come onto the market, which was the 300 in September 2003. Nevertheless the 280 wasn’t seen often on custom bikes – not least because with increasing tire widths, the conversion efforts increase too. Rick’s Motorcycles took up the challenge and equipped Harley-Davidson’s hottest performance bike with the fat rubber. On the streets around Lake Faak, the V-Rod was tested thoroughly, and in this case one thing is true…fatter is better! 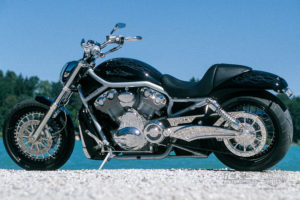 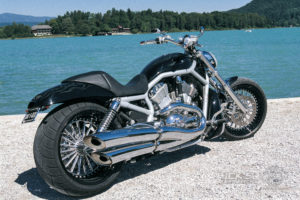 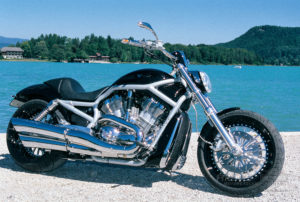 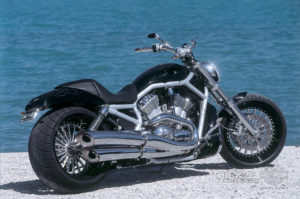 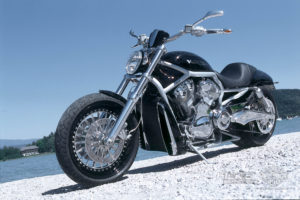 For safety engineers the 280 tire has to be a revelation: a larger surface means better power transmission to the road, more surface for the breaking power and more rubber sticking to the asphalt when going into bends. Not that it matters much with a cruiser like the V-Rod, which is low on the ground anyway: by the time Harley’s most powerful machine has reached the end of the tires, all foot controls and half the exhaust will have been eroded by then. In this sitting position the bum cheeks are more likely to scrape the surface, rather than the knee on the asphalt.

However, if you want to show a Japanese bike the rear brake light at the next lights, the additional rubber comes in handy.

Any doubts about the rideability of such a wide rear tire are being dissolved with Rick’s built V-Rod: with the experience of various wide tire conversions, which were anything else but stable –  including a dangerous pull to the left into the oncoming traffic – the approach to such a bike is more critical and comes with lowered expectations. But the chassis of the “Hot Rod” shows the full potential of a perfectly executed wide tire conversion; the bike is so stable as if laser-guided. At any speed it is possible to let go of the handlebar. No drifting into another direction, no reaction to bumps in the roads or any other unevenness. “A good part of the development went into letting the 280 rear tire run centrally in the swingarm,” explains Patrick Knörzer, the boss of Rick’s, and in charge of product development. “After showing customizers a simple way of mounting a 240 tire into the stock swingarm, we knew that this would not work any longer with an even wider 280 tire. But since the end of 2002 a swingarm especially for the V-Rod was already being worked on: a masterpiece in terms of design and technology – and made for the curved lines of the V-Rod. “The new rear wheel swingarm gave us the possibility to center the rear wheel and to fulfil our technical expectations”, explains Rick. Part of this is the hidden rear brake of the side drive brake system on the drive side, which keeps the right side of the wheel completely clear. Brake caliper and Rick’s 11.5-inch brake disc disappear almost completely behind the belt pulley. The necessary offset for the centrally orientated belt drive is reached via a wider drive pinion on the engine, which makes any (expensive) modifications on frame and motor superfluous and the conversion costs stay affordable. 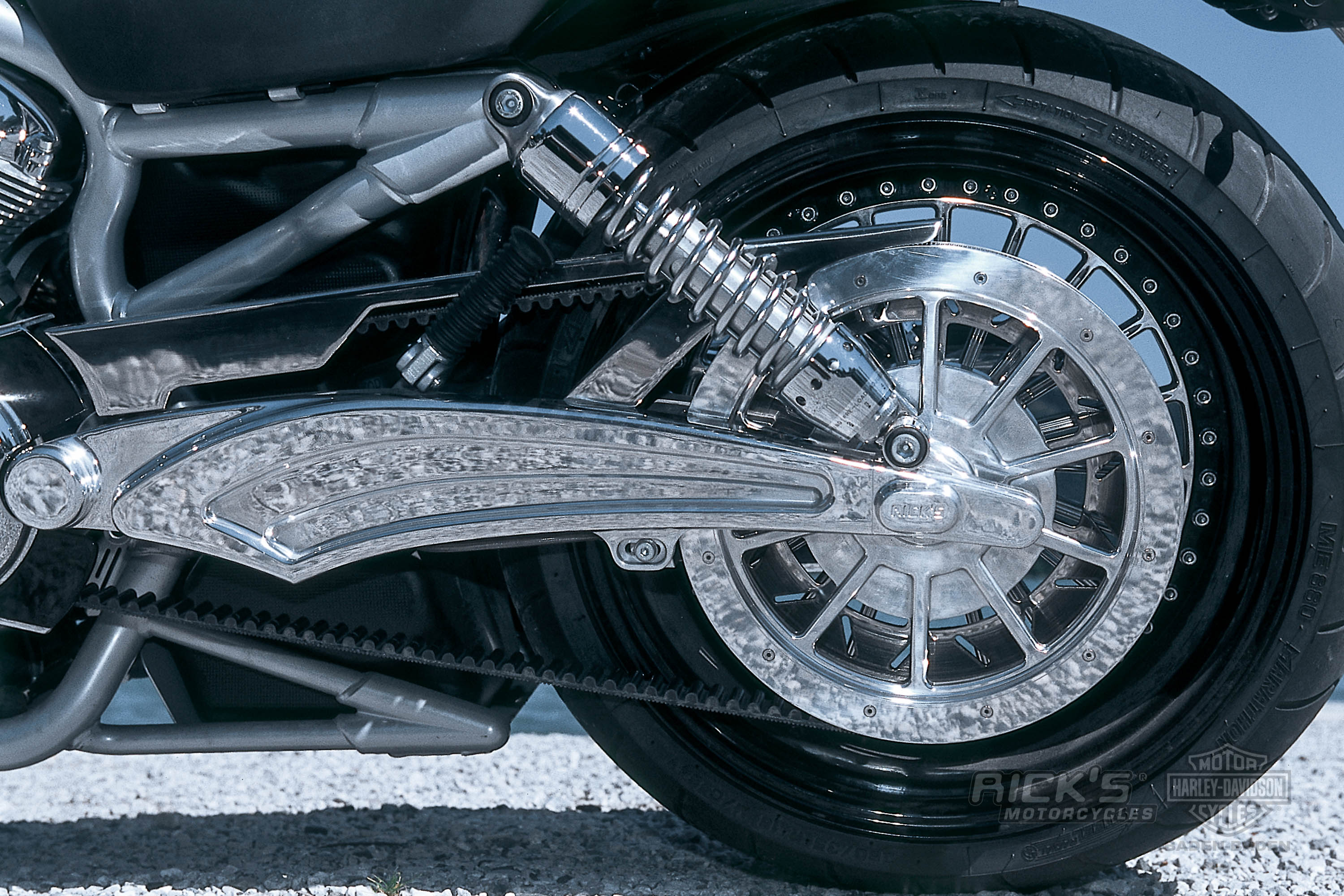 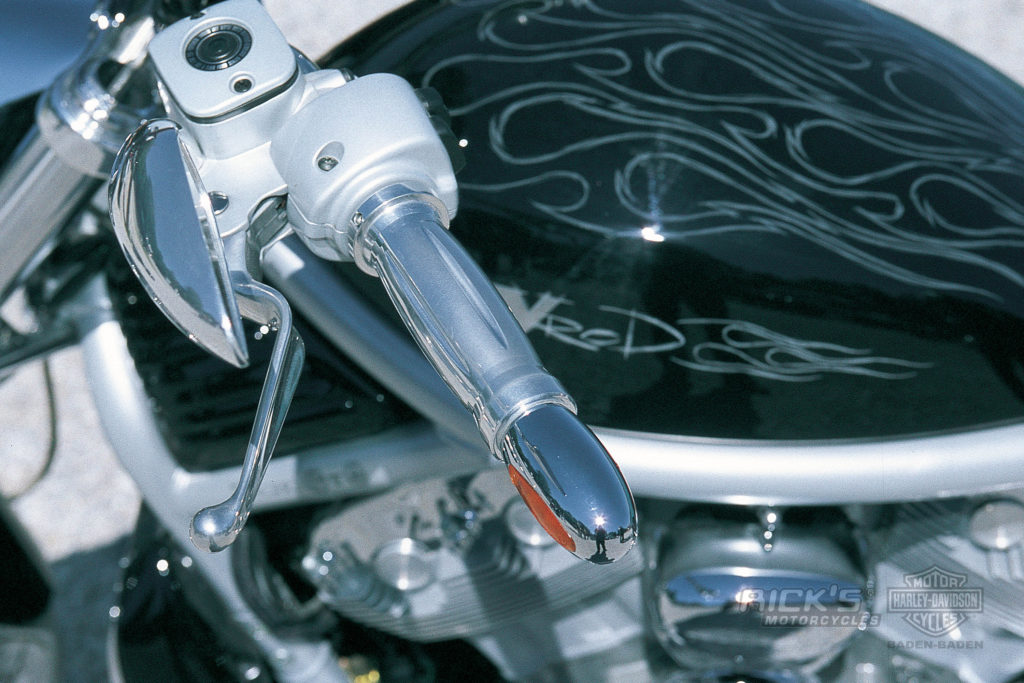 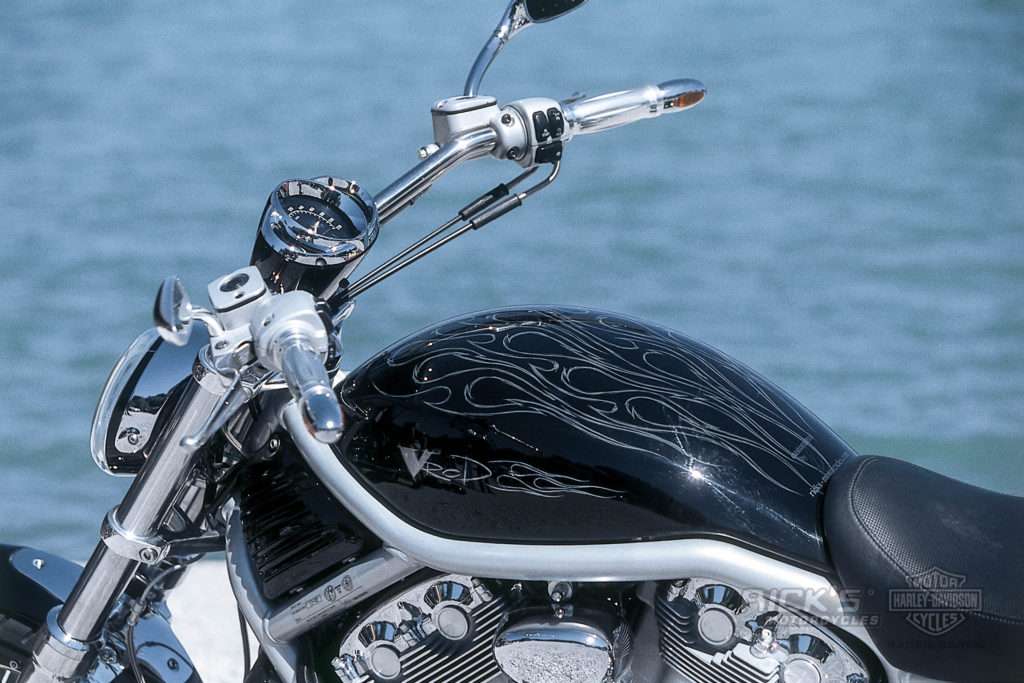 The wheels are prototypes, and Rick’s took the already known 10-spoke billet wheel design and developed it further into the new “Super Steve” look with 20 finely machined spokes, whereby on this prototype each spoke received an even more filigree look by applying a long cut-out – in the stock wheels the spokes are smooth. Mounted into the black rim bed, it gives a custom look, which can be used for numerous styles – no wonder that Rick’s wheels can by now be seen on custom bikes all over the world!

For the V-Rod Rick’s offers a complete kit for making the rear part look fatter: in addition to the swingarm and wheels set, a wider rear fender is needed, which is available at Rick’s with a bright LED rear light. But the front fender can also be exchanged for one of Rick’s parts. Apart from the Superbike handlebar and new instruments, the machine stayed largely stock. The 110 bhp from the stock motor, only improved by the Screamin’ Eagle end pots from Harley’s own program, are more than enough for a quick ride around the lake.

In bends the chassis stays neutral and shows no tendency to fall into the bend and can easily be steered out of the bend as well. The additional tire width on the asphalt is a positive aspect when accelerating out of the bend because the power is better transferred onto the road. With the 280 tire, on the 10.5-inch wide Rick’s rim, the power on offer can be used better and more safely and without sacrifices in terms of running straight and handling.

Conclusion: fitted with a Metzeler 280, Rick’s “Hot Rod” offers a more powerful and safer riding performance than the stock bike – and that can be proven by riding the bike and when opening the gas. This V-Rod named “Hot Rod” deserves its name!