When the Milwaukee-Eight engines celebrated their premiere, a murmur went through the rows of long-term Harley enthusiasts, but now tempers have calmed down again. Compared to the Twin Cam engines, advantages like performance and torque power, and even the low heat generation when waiting at the lights, is positive. As far as customizing is concerned, friends of individual style also get their share. Rick’s Motorcycles has given the Harley-Davidson Street Glide a 23-inch front wheel, a rear conversion and other fine detailing, which give the bike more individuality without influencing ride performance negatively.

Harley’s Tourers are more popular than ever, leading with the Street Glide models as the most sought after long distance touring vehicles. Even the stock version leaves not much to be desired. In this case top of the list of the customer was a 23-inch front wheel in ‘Rick Rod’ design. But what sounds easy in theory is often more complicated in reality, or requires a lot more work, and simply “old wheel off, new wheel on” is not enough. If you were to do that, the bike would after mounting of the larger wheel be lifted up at the front, thereby negatively influencing the whole bike geometry and later ride performance. Rick’s Motorcycles not only has the necessary know-how and decades of experience of building custom bikes, but also their own construction department and parts manufacture with all necessary machines and tools. For the Touring models, completely new triple trees were developed, which were adapted to wheel sizes of 21, 23 and 26 inches, with which despite larger wheel dimensions ride properties can be achieved which are largely similar to stock. Customizing nowadays is more than just exchanging parts and bending a bit of sheet metal. 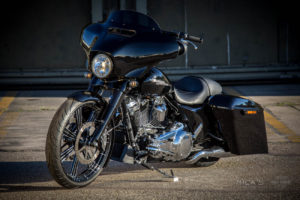 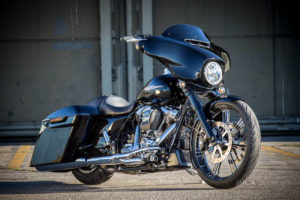 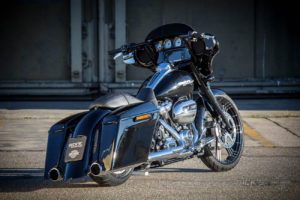 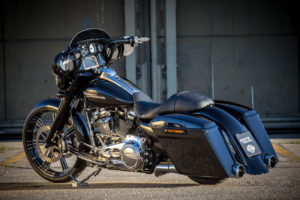 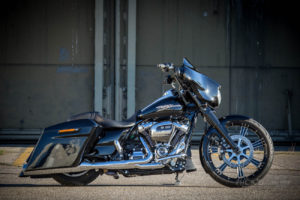 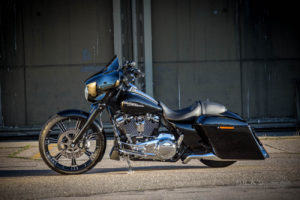 Forming sheet metal is therefore a good cue, because the front fender has to also have new dimensions for the new wheel, and if at Rick’s something new is being created, then it has to work all-round. Good design and perfect execution are typical hallmarks of all Rick’s parts and of course matching covers are available for all wheel dimensions from the Baden-Baden workshops.

The whole rear is also no longer like stock, the reason being a conversion kit with a rear fender and new cases from glass fiber reinforced plastic or ABS plastic. The fender has cut-outs into which the more pleasing CVO rear lights can be inserted, and Rick’s licence plate base is the icing on the cake.

The new touring cases are noticeably higher than the stock version and have a larger volume capacity, but the stock cover can still be reused, including the closure, which will affect price calculation positively.

Finally, we could mention Rick’s touring handlebar, which allows for a more relaxed sitting position, or Rick’s grips and many more details. It would easily be possible to write more pages about the high art of customizing, but we would like to instead refer to the many photos and that this is a ‘real’ Rick’s bike, which is a promise for perfection and maximum quality into the last detail.