The Touring models have since a few years been more in demand than ever, at least on the European continent, but funny enough, Road Glide models are often overlooked. Admittedly, the rigid fairing is something to get used to especially in bends and when maneuvering, as well as the design, which does not appear to be as harmonious as that of the Street Glide. On the other hand, it is much easier to move the enormous weight of the bike from the left to the right, which translates into more agile handling. If you ever had the pleasure to take a Road Glide through narrow bends, you will know this.  You either like the bike or not, and it is also a fact that lovers of this bike become more and more also on this side of the pond.

This trend has not gone unnoticed at Rick’s Motorcycles, and they started years ago to develop various custom parts for the Touring models. That Tourers are more or less built on identical components like frame, chassis etc. is only an advantage. In order to use larger front wheels from 21 inch on for example, a triple tree was developed with which the bike geometry and trail can be corrected. The ride performance after the conversion is, despite Rick’s 26 inch ‘Super Steve’ design wheel, like stock. The new front wheel is now covered by a steel fender, which was also made by Rick’s. The larger angle between downtubes and the wheel is covered with a Rick’s spoiler, which optimizes the lines of the bike additionally. Made by Rick’s is also the cases set. Side filler, fender and cases were designed to create a long-stretched look of the bike. Cut-outs for the dark CVO Touring lights have already been incorporated into the fender.

If you look a bit closer at the photos, you will find many more parts, which are not from Milwaukee. Air filter, handlebar, grips and much more stem from Rick’s perfectionist custom parts designers! If you want to know more, dial the Hotline of the Harley-Davidson authorized dealer and arrange a date for a test ride. 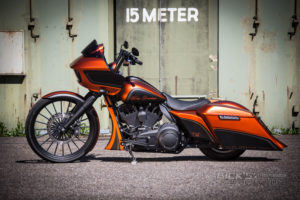 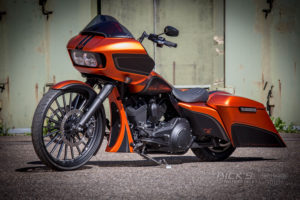 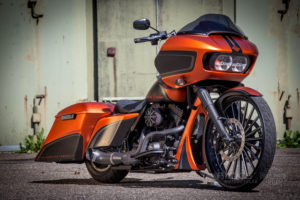 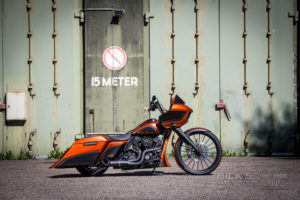 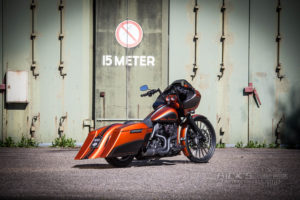 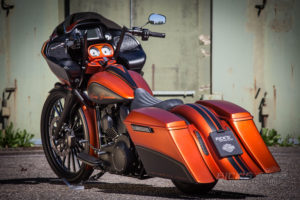