Why does Rick’s Road King taste so good?

What is the last opportunity to race your bike on the roads before the monotonous winter days set in and to let the rays of a warming sun reflect on the paint? Harley bikers know the answer by now, and that’s why the event has increased in popularity during the last few years, especially in Germany: Mallorca Bike Week. That many Germans now live on the island, made it all the more attractive for customizers like Rick’s Motorcycles: Patrick Knörzer of Rick’s has for years been part of this scene and uses the opportunity to show his autumn creations in the “best light. 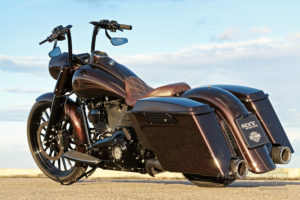 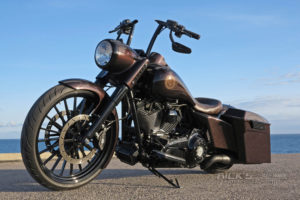 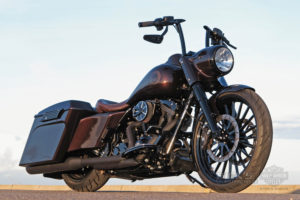 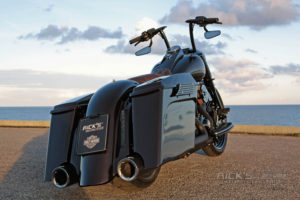 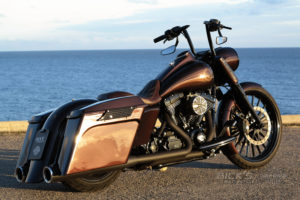 For Mallorca Bike Week 2014 the SKS truck once again took many customized Harleys to the Mediterranean island, which has somewhat shed its bad “party capital” image, and in November is refreshingly quiet. “Party time” is nevertheless still an aspect as not many on the plane realize how quickly the sun sets. But the Porsche metallic brown paint was asking for a low sun to glow in the last magic daylight. Hardly any chrome and aluminium, but instead lots of gleaming black and the Porsche paint elevate this 2011 Road King, which embodies the American “tail dragger” style: high and fat front, the saddlebags at the rear and the rear close to the ground, plus the ape hanger for a comfy sitting position, because speed with this bike is like Einstein: relative!

Instead the stock bike received a set of Rick’s spoke wheels with finely machined spokes: at the front the big 23-inch wheel with the 13-inch brake discs introduced in 2014, which suit the look of larger wheels much better than the former standard sizes. Reusing the Harley stock calipers is achieved with Rick’s inconspicuous adapters, with which the 4-piston calipers are positioned further out. Matching the “Big Wheel look” are Rick’s full metal fenders, which hug the tire closely. The larger front wheel entails some work, which nobody normally thinks about: the center of gravity of the bike goes to the top, and that’s why Rick’s changed the fork angle with the 7-degree Touring triple tree, but not so far that the headlamp had to be horizontally adjusted, for that there is Rick’s headlamp housing.

By now extreme Bagger conversions are routine at Harley-Davidson Baden-Baden – this bike was created in only 3 months, and partly live at Rick’s Day 2014. 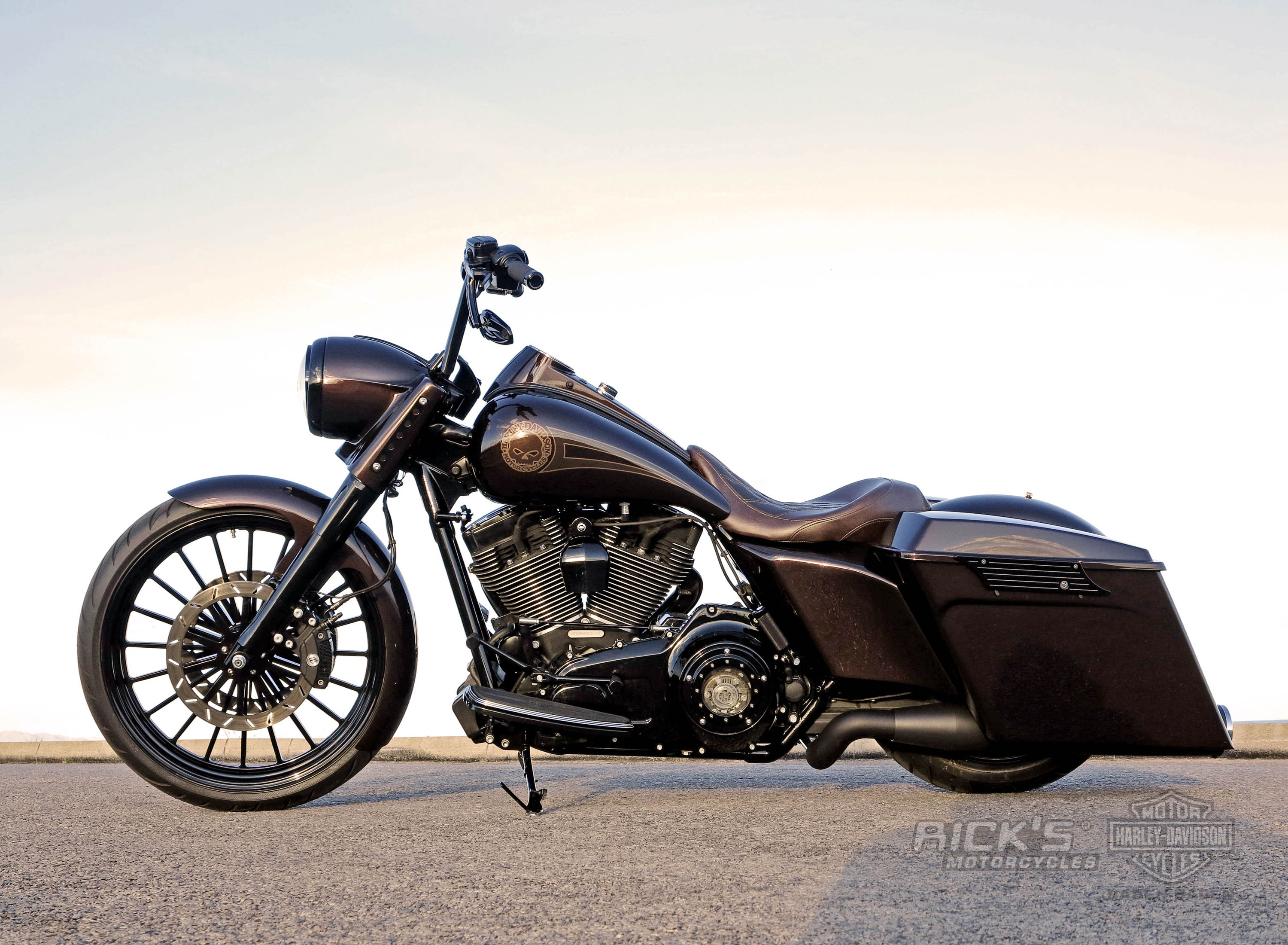 At the rear the complete “Rick’s Package” with rear fender, enlarged saddlebags and side covers was used, and the inserts serving as indicators and taillight are from the Harley-Davidson CVO models. Because the machine was already dismantled almost completely, the stock tank halves were handed to Rick’s metal workshop who stretched the gas container to fit neatly under the leather seat.

The Vance & Hines exhaust system runs on both sides through the saddlebags to the rear, Rick’s rear system offers all options, including downward pointing end pieces, so that the exhaust seemingly finishes in the saddlebags! Rick’s ‘Good Guys’ air filter and the bull’s eye clutch covers are the only changes to the drivetrain – the Road King with the 103-cubic inch Twin Cam has power enough!

Premier finished – if just the sun wouldn’t have gone down so quickly – and then the photo session at the harbour was quickly replaced by the nightly boulevards and Ramblas on Mallorca, which many Harley bikers know so well!
Text: HRF, Photos: Studio-1, Gerd Scheidel