More than a Mega Tourer

For a long time, the Harley-Davidson Touring models sat in the showrooms of European Harley dealers and didn’t move…Softail, Softail, Softail and maybe a Dyna, and on the European market successful V-Rod were the choices and order of the day – and of course sought after customized bikes.

Touring bikes from Harley were something for hardened long-distance riders who had time, because Harley couldn’t compete with the high-speed tourers from Europe and Japan – especially not on price. To ride a Harley Tourer is even nowadays nothing for someone watching the pennies, but the Tourers, which are so popular in the USA, and their converted Bagger custom variations, are also becoming more popular over here with people who don’t just want to ride with toothbrush and credit card on a hard Softail.

With the 2014 model year Harley-Davidson not only introduced model improvements for the Touring models, but they were completely new motorcycles coming out of the factory, developed to perfection, which Harley critics and followers alike didn’t think was possible. For the 2015 model series the Road Glide was added, but the only Harley-Davidson model with a fairing attached to the frame was never a hit, but this could change with the 2015 model. Rick’s Harley-Davidson in Baden-Baden was the first worldwide who converted the Harley Mega Tourer into a Bagger… 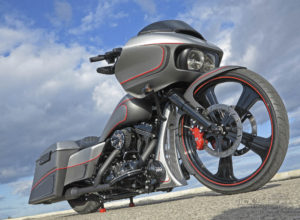 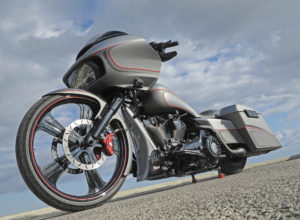 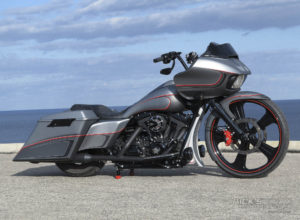 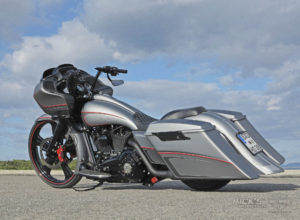 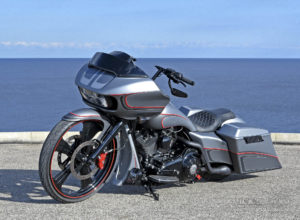 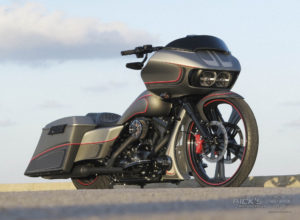 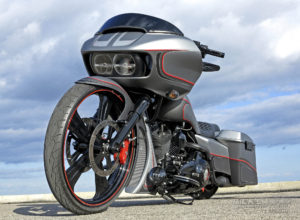 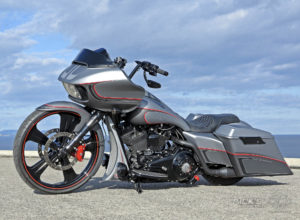 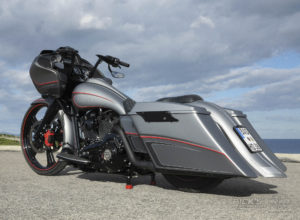 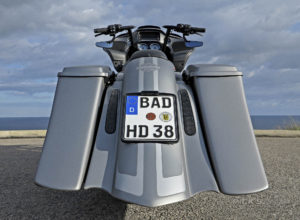 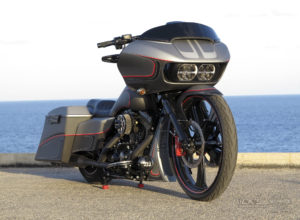 Quick Rick: only two days after the first 2015 FLTRXS Road Glide rolled into the Harley-Davidson Baden-Baden showroom, it was already history as Rick’s team had taken the machine apart and modified the frame with the 2014 TÜV approved frame conversion for 26/30 inch front wheels.

During the 10th Rick’s Day in October, and at the same time Rick’s Motorcycles’ 20th company jubilee, the building process could be followed hour by hour live and listened to how Rick discussed with Marcel Sinnwell the details of the paint job. Already on 28th October the bike rolled off the work bench into the truck to Mallorca, where “Bike Week” is a last opportunity for test rides and photo shoots in sunny weather. Once again Rick’s team was the first with a custom project, and this time worldwide.

At the beginning of November, “Mallorca Bike Week” is almost the last opportunity before the grey winter months to get some sun – and together with other Harley riders to ride around the Mediterranean island. After that even in Spain winter and rain set in.

Already in 2013 Rick’s recognized the Bagger trend as long-term and important: if someone has a touring bike converted, then it is a long-distance customer in more than one way. The bikes don’t just stand in the garage, they are being ridden. So, the team developed a complete line of saddlebags, side covers, rear parts and front wheel kits, when Harley-Davidson published the shocking news: the model year 2014. Although the touring models of the model year had the same name, even the same type designations like their 2013 predecessors, they are completely different motorcycles. Hardly any part of the 2014 bikes fits on a 2013 model and vice versa, which also applies to all previously produced and developed custom parts. 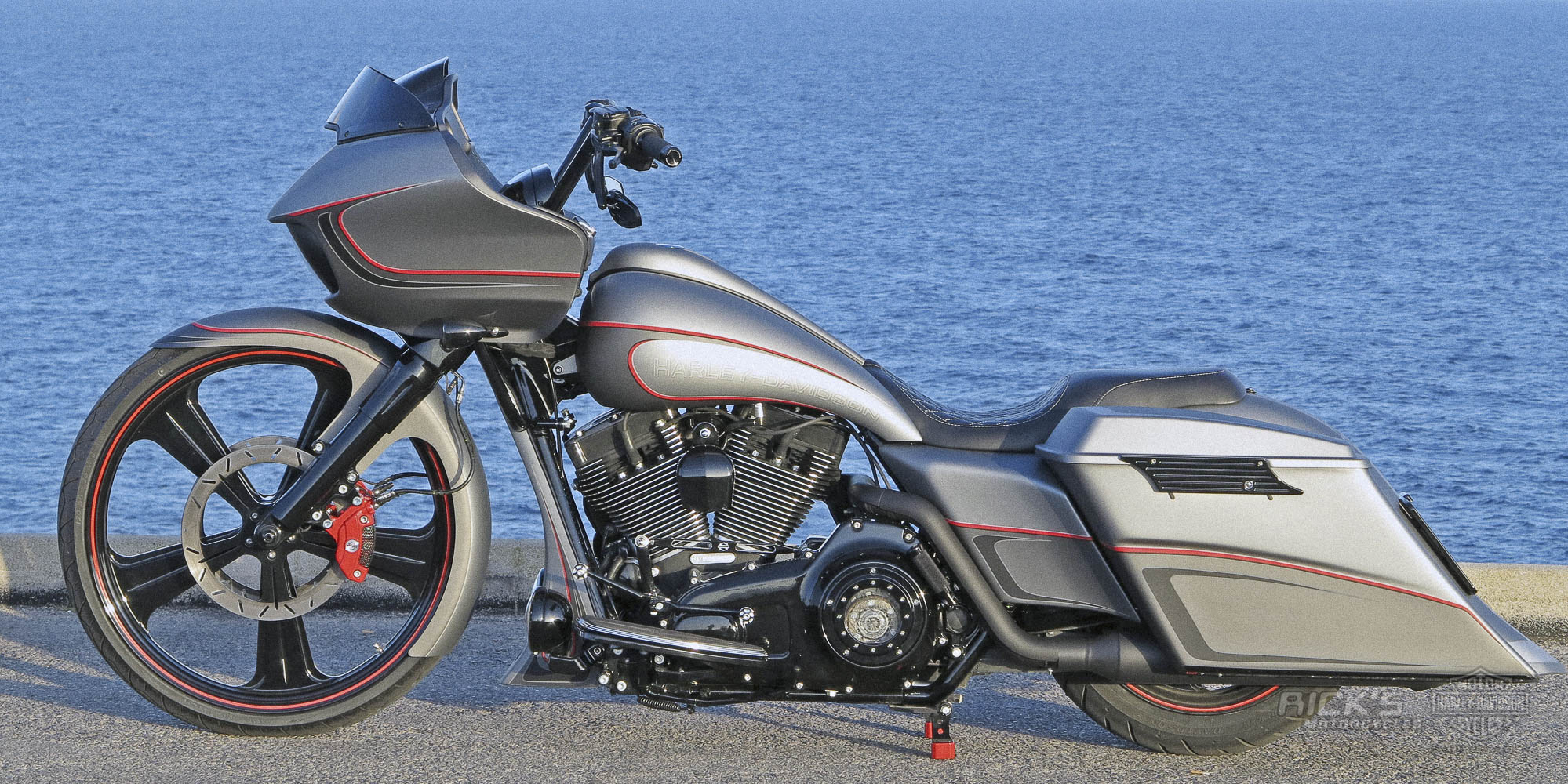 It was a moment of epiphany and all custom parts manufacturers all over the world were grinding their teeth, but Rick’s team carried on and went back the drawing board and the CAD program. When the first 2014 models came into the showroom of Harley-Davidson Baden-Baden, the conversion of the custom parts from 2013 to 2014 models did not happen 1:1 – in addition to the various mounting points also the changed styling had to be considered – and therefore also the outer shapes of the new models were optimized.

The first Road Glide Bagger from Rick’s is therefore also a rolling prototype because there were no other parts from Germany for the Harleys with frame-mounted fairing, because the numbers of the machines were simply too few.

The premier conversion consists of – in addition to the frame conversion – Rick’s 9-degree triple trees, Rick’s 26” “Gimmi” design wheels with the newly introduced 13” brake discs and (red powder-coated) adapted H-D brake calipers. There is, of course, a Rick’s steel fender covering the front wheel; at the rear the complete “Rick Rod” Bagger tail end (with over 10 cm additional luggage space at the bottom and 20 cm to the rear) was used – ready to install and adapted to all Tourers from model year 2014. In addition to the comfortable Arnott Airride, the machines have an electrically operated bike stand where the position is determined by sensors.

Numerous accessories “made by Rick’s” like handlebar, grips, adjustable hand levers, front spoiler (with H-D “Day Maker” LED spotlights) improve handling and rideability. The machined “Good Guys” air filter was made especially with the design matching the wheel…at the moment.

The stretched tank is based on a modified Custom Chrome Europe tank and was adapted at Rick’s to the new Road Glide.

The KessTech ESM sound-adjustable exhaust has end caps pointing to the bottom – from the back the machine seems to have no exhaust. Marcel Sinnwell (www.sinnwell-design.com) is responsible for the subtle, elegant paint, which gives this bike a noble touch.

Even before shipping the bike to Mallorca, Rick personally tested it on the motorway and other roads – and the positive ride impressions were confirmed by test riders on Mallorca.

The heavy Tourers with frame attached fairings are still exotic on European roads, but the resonance at “Mallorca Bike Week” showed it clearly: this will not be the last Road Glide which rolls out of Rick’s workshops…

From the Tour Glide to the Road Glide

The Tour Glide was introduced in summer 1979 for the model year 1980. It was a radical development step, because this Harley-Davidson model was the first with a fairing attached to the frame, and it was the first Harley with a V-Twin mounted in mounted in rubber blocks, partly inspired by the Norton frames of the 70s. Frame and rubber bearing were developed by a young engineer, whose name was to become famous in Harley’s later history: Eric Buell. The Tour Glide was the first bike powered by the big 80-inch Shovelhead motor and was to be competition to the Japanese tourers and the BMW R 100RT in terms of touring suitability.

Improvements existed in the whole model history from the Shovelhead era to the Evolution motor: early Evo model years have a clever air support of the front fork, on which a part of the handlebar was used as an air reservoir for compressed air. In 1985 the Tour Glide was equipped with a belt drive. Although the FLT stayed in the model program until 1996, it was never produced in large quantities –  and especially in Europe the sales figures were minimal, what was also due to the high price. The model policy of Harley was not always consistent: first the machine came only back for one year as Road Glide (1998) with an Evolution engine, then it was completely overhauled for the rubber bearing Twin Cam, which was initially introduced to the Touring models in 1999. A further “break” happened in the 2014 model year when all other Touring models were overhauled, but not the Road Glide.