“On the road” test ride with the prototypes: Rick’s ride the first 30-inch front wheel “Made in Germany” to Rome!

When Rick’s develops a new product, then company owner Patrick Knörzer often lends a hand as well or tests it comprehensively during the TÜV proceedings. While the 30 inchers passed the TÜV tests successfully, a Rick’s Bagger rolled out of the House of Custom workshop in Baden-Baden and then went via Munich via Trieste, Lake Garda and along the Italian coast to Harley-Davidson’s 110th birthday celebrations to Rome…not only in sunshine and on the best roads, but instead with a successfully constructed high-speed Bagger chassis which can withstand demanding road surfaces and all sorts of speeds. 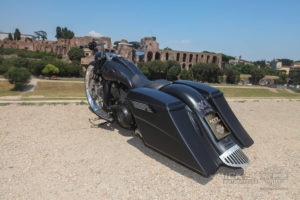 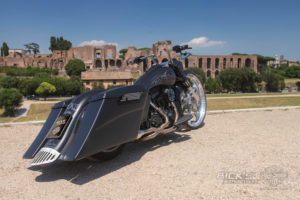 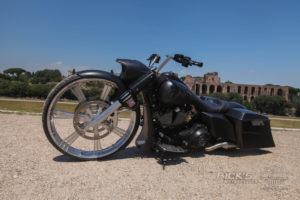 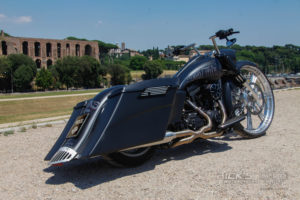 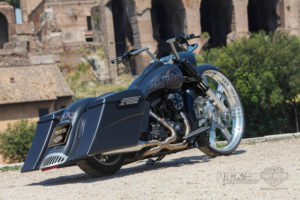 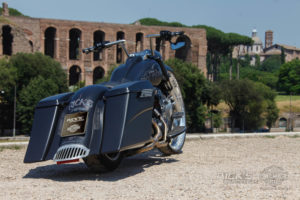 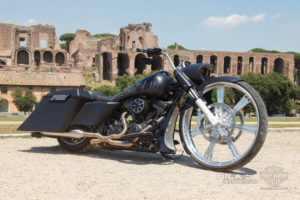 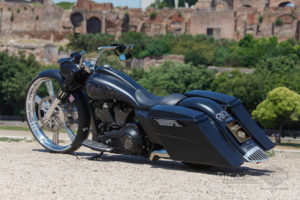 The saying “all roads lead to Rome” stems from those days when Rome became the center of the Roman Empire with its roads then being used by oxen carts, horse drawn carriages and sedan chairs. The names are still the same: Via Appia, Via Aurelia, Via Flamina and Via Ostiense, but what the saying doesn’t mention is that all roads also bring all traffic to Rome! The traffic chaos in Rome is legendary and has apparently not changed since the times of Julius, Nero and Caligula: even then carts had to be left outside the city walls! Even today the center is – as in many Italian cities now – closed to traffic unless you are a resident, but motorcycles are still somewhat tolerated. There are numerous cities with similar traffic chaos, but the southern temperament of car and scooter drivers makes a Harley ride through Rome a particular kind of adventure. To get Rick after a more than 1,000 km ride via the Brenner pass and Italian motorways to a photo shoot in the traffic hell of the capital required some convincing, but for a bike feature of this top creation only one location was logical: the place where a few hundred years ago the old Romans span their wheels too – Circus Maximus! Right in the center of ancient Rome the race track is today relatively easy accessible and has already been used for competition purposes.  Especially the chariot racing is legendary – and who hasn’t seen Ben Hur, which gives quite a good impression of what it must have been like then. Incidentally, the Roman race chariots had an 8-spoke design, but were made of wood…

Would Emperor Domitian have been at home – he had his palace on Palatine hill built so he could follow the chariot races – he would surely have come over for the photo session, because the photo shoot on the former tribunes caused quite stir in the Roman street traffic. But let’s talk about the bike:

“It was clear to us from the start that a Bagger with a 30-inch front wheel needed intensive development of the chassis because the ride performance of the stock bike needed to be kept at all cost,” explained Rick, who followed and supervised the development in every phase.

Easier said than done, because in principle such a Big Wheel conversion at the front is nothing else than a chopper with all disadvantages; an elevated center of gravity and a changed trail. Worse: due to weight and size of the saddlebags the Bagger tends to swivel at the rear and is vulnerable to sidewinds. So, there’s a long list of demands which have to be considered when developing 23, 26 and 30-inch wheels.

It is not possible to save weight on the tires, only that it becomes a bit lighter when the rubber has worn off a bit after a while… 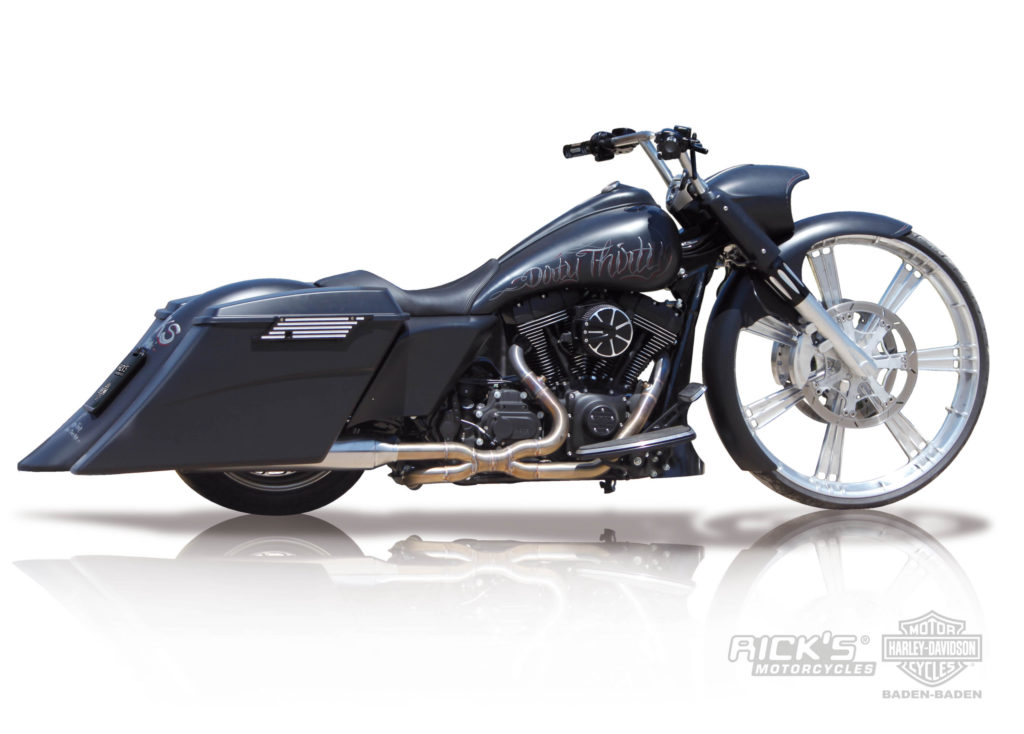 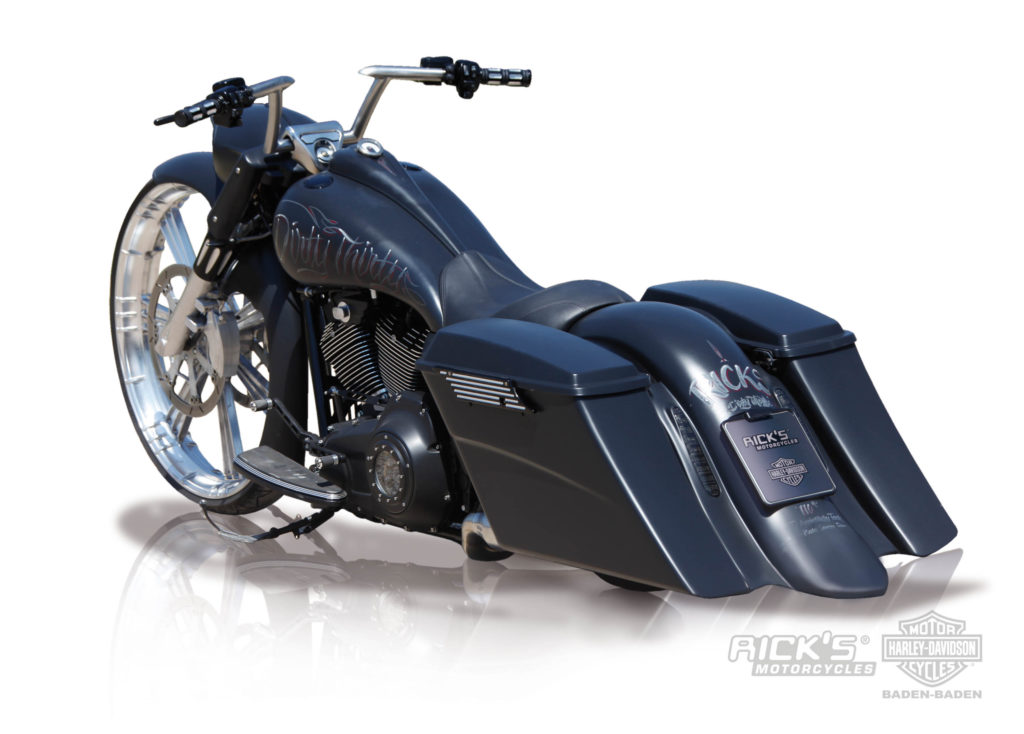 Rick personally tested the wheels in high-speed mode before approving the design. “We want to offer a European made alternative in this small but high-quality market segment, which can withstand the speeds and demands in everyday use here,” underlines Rick, “and with this wheel we set standards for 30-inch wheels!”

The necessary steering head conversion for the 26 and 30-inch wheels is offered to all Rick’s customers and all Harley-Davidson dealers and customizers with full TÜV approval and tested up to 200 km/h.   addition Rick’s has created a special tool for mounting tires without a mounting iron, with which tires with 23, 26 and 30-inch can be fitted without problems. For the 26 and 30-inch wheels – the 26-inch version is by now available in the designs “Super Steve”, “Rodder” and “Gimme Five” with TÜV – Rick’s has developed brand new 15 inch brake discs, which work optimally with the “Good Guys” downtubes and Rick’s brake calipers. These were mounted on the bike for the first time and have proven excellent in heat and massive traffic. “Rick’s Rod” 30-inch design front wheels are made to order, which underlines their exclusivity. Two or three sets are always in stock and orders are taken at Rick’s now:

Already last year Rick’s introduced a complete line of Bagger parts like the “Good Guys” air filter and new, especially ergonomic hand levers, components which by now have become top sellers in the scene because the were made by professionals for professionals: simple installation, highest quality and excellent everyday use properties have made Rick’s components popular with authorized Harley-Davidson dealers and customizers. Add to this the fact that Rick’s parts are constantly being improved due to test rides, and after this trip the saddlebags of the Bagger kit will be modified further for the banking position. The brushed Vance & Hines stainless steel exhaust system offers in combination with KessTech ESM 2 end pots an electronically adjustable solution. The merging of the exhaust fumes in the rear part was especially developed by Rick’s as a one-off and corresponds to the style of the front spoiler, which is also available as a stock item.

“We neither had much time for a name nor for the paint, Rick says smilingly during the photo shoot opposite the Palatine, “and with all the dirt from the ride, “Dirty Thirty” was indeed a suitable name.” “Wild Air” Hörby pinstriped his famous ”last minute paint” onto the body parts, and they were then dried by the wind during the first stage of the ride. Much could be said about the details like the exhaust hidden in the rear, clean tank dash and the other Rick’s accessories, but that would only distract from the subject. Rick’s accepted challenge of a Bagger with 30-inch wheels and solved it professionally and convincingly. “The tour to Rome challenged the bike in all riding situations and proved the road capability,” underlines Rick. Not only could the bike hold its own without problems with the accompanying stock bikes of the unofficial Harley Germany tour, but companions of Rick’s at the tour confirmed in Rome that “Rick had ridden the devil out of this bike, unliveable for such a wheel diameter…”, which can only be emphasized after the demanding tour round the Colosseum and via the old Via Appia. In the meantime the bike has also won a class victory during the Hamburg Harley Days, and the next dismantling for the final paint is also on the cards. The wheel wasn’t invented in Baden-Baden, but once again Rick’s makes wheels for the future!

When it comes to touring with his custom bikes, Rick doesn’t mind challenges: at the beginning of October 2017 he rode the 300 “Fat Ass” prototype over the passes of the French Alps and the Route Napoleon, and for test rides of Rick’s bikes, the Black Forest and the northern Alsace also offer ideal conditions.

“Dirty Thirty” rolled on its stock wheels from Munich to Rome and to the harbour of Ostia, which in antiquity was still submerged in the sea. The excavated Ostia Antica marks Rome’s old harbour, and also the Tiber now runs in a different river bed. Via Via Ostiense or the newer Via Christoforo Colombo it’s 27 km to Rome, and through Porta Ardeatina one rides through Aurelius’ city walls, the last and largest city wall of antiquity Rome.

Depending on traffic, which varies between totally chaotic and completely blocked, past the Caracalla Terme one comes directly to the Colosseum, Palatine Hill and the Roman Forum. The impressive Colosseum is still worth seeing, and if you have time for a visit, plan in a guided tour to the underground cellars. American troupes marching into Rome on 5th June 1944 the same way for liberation of the city are supposed to have said when they saw the Colosseum “we didn’t know our artillery shoots that hard”.

The arena is of course, THE tourist magnet and visited by thousands. The Via de Fori Imperiali was still used by Mussolini for parades and one gets quickly to Piazza Venezia, which nowadays houses an art museum. From June 2013 the street was to become a pedestrian zone. The piazza is dominated by the Vittorio Emanuele II monument, which remembers Italian unity and was built for the 50th anniversary in 1911. Several museums, the grave of the unknown soldier and a viewing platform make the monument the “altar of the fatherland”.

A spin on the cobbles of Piazza Venezia is no problem for “Dirty Thirty”. On Via di Teatro di Marcello one passes the theatre with the same name, which served the Colosseum as a model. With a quick glance to the left in the direction of Capitol hill one sees the Tarpeian Rock, from which traitors plunged to their death. In Rome everything is pretty close together, if you know where you are. Soon we pass on the right the temples of Hercules Victor and Portenus, where the first gladiator fights are supposed to have taken place.

On the left is the Arch of Janus, and if you had x-ray vision, you would see the “Cloaca Maxima”, which flows into the Tiber and is still operational!

Then up comes the Basilica Santa Maria in Cosmedin, which  houses the famous “Boca della Veritá” fountain as featured in the film “Hyperlink”. The church is partly in the grounds of the antique Circus Maximus, which is even today one of the largest sport arenas in the world.

With the emperor palaces in the background, we take photos of Rick’s “Dirty Thirty” in the grounds of today’s floor of the Circus, which is now 6 metres higher than when chariots chased around the obelisks! After the photo shoot we ride through Porta San Sebastiano onto Via Appia Antica. If you saw Stanley Kubrick’s “Spartacus”, from the city gate along Via Appia in 71 BC more than 5,000 prisoners of the Spartacus revolt were nailed to the crosses here. Shortly after the tunnel of the city motorway, to the right is the “Domine, Quo Vadis” church, where, according to legend, Saint Peter returned to Rome to be crucified. Opposite is the entrance to the catacombs of San Sebastiano, because here Via Appia – which connects Rome with the gladiator city of Capua and the Roman winter residences in Naples – was used for centuries for grave stones and as a cemetery. In the Christian catacombs alone more than half a million dead are supposed to be resting. To the right and the left the Via Appia was kept clear of buildings to keep its original character. With a small detour via Appia Ardentia we shoot a few more colour photos on an empty part of Via Appia, then we ride back direction Ostia. A three-hour tour of Rome has quite a lot to offer…