The qualities of the Harley-Davidson Road Glide models are all too often underestimated. The front fairing is screwed to the frame, and that seems strange when first turning the handlebar. The advantage, however, is clear because the mass, which has to be moved with the handlebar, is clearly less and makes this Tourer handle well in bends. Even the stock bike is already a tourer that can do more than just go straight on the motorway, but since this is Rick’s Motorcycles one can safely assume that this bike is far from being a stock bike. 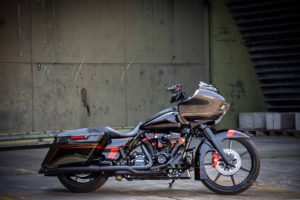 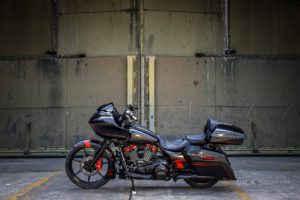 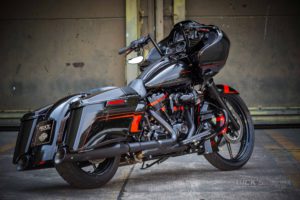 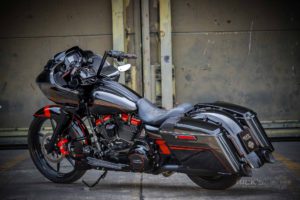 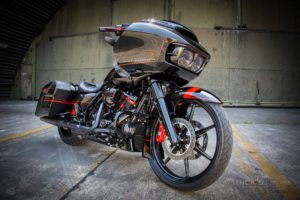 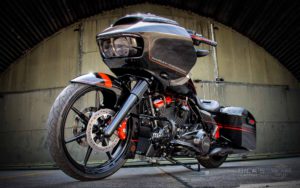 If you decide on the Road Glide and want more power, then the 2018 model year is a particularly nice bike. The stock CVO Road Glide has already a lot of power and 1,923 cubic cm (117 cui), 105 hp and 166 Nm are impressive for a stock bike. And if you have an exquisite taste, you are in the right place at Rick’s. In this special case it was not only the exclusive taste and a sense for something special, but also know-how paired with a rather exact idea of what the bike should look like, of which the wish list gives an idea. A selection of parts and modifications ensures that the bike is never boring, even at second, third and fourth glance. The same applies to the riding fun, of which there is a lot. The most difficult part was to implant a larger front wheel. 23 inches is comparatively little, but it takes more than just changing the wheel. At Rick’s everything is done to perfection, and if only a larger wheel was inserted, the whole bike would be lifted at the front, which would in turn affect the bike’s geometry extremely negatively. To counteract this, Rick’s has constructed a special 7-degree triple tree for Touring models. The wheel itself comes from Rick’s Motorcycles’ portfolio and is called “Seven Sins”, a one-piece forged wheel, which was powder-coated black for this conversion. The larger wheel also meant changing the stock fender, and with Rick’s spacer kit a low-slung fender was placed above the wheel and painted in stock color. Many parts including engine holder, horn holder, tappet cover, lifter blocks, side stand holder, licence plate base, holder for additional headlamp, crash bars, fork cover and much more were also painted a deep black. It goes without saying, the icing on the cake are the red calipers.

Normally Tourers distinguish themselves by their different cases in which the luggage can be stored, whereby the top cases are on the rear and don’t always look good there. If you don’t have so much luggage, you can also use a top box. The flat case is only half as high, like the stock case, which should be enough for a bit more than a pizza carton. Thanks to quick change locks the box can be detached and attached quickly, and thanks to a back rest mounted to the case, a passenger can feel safe as well when accelerating! 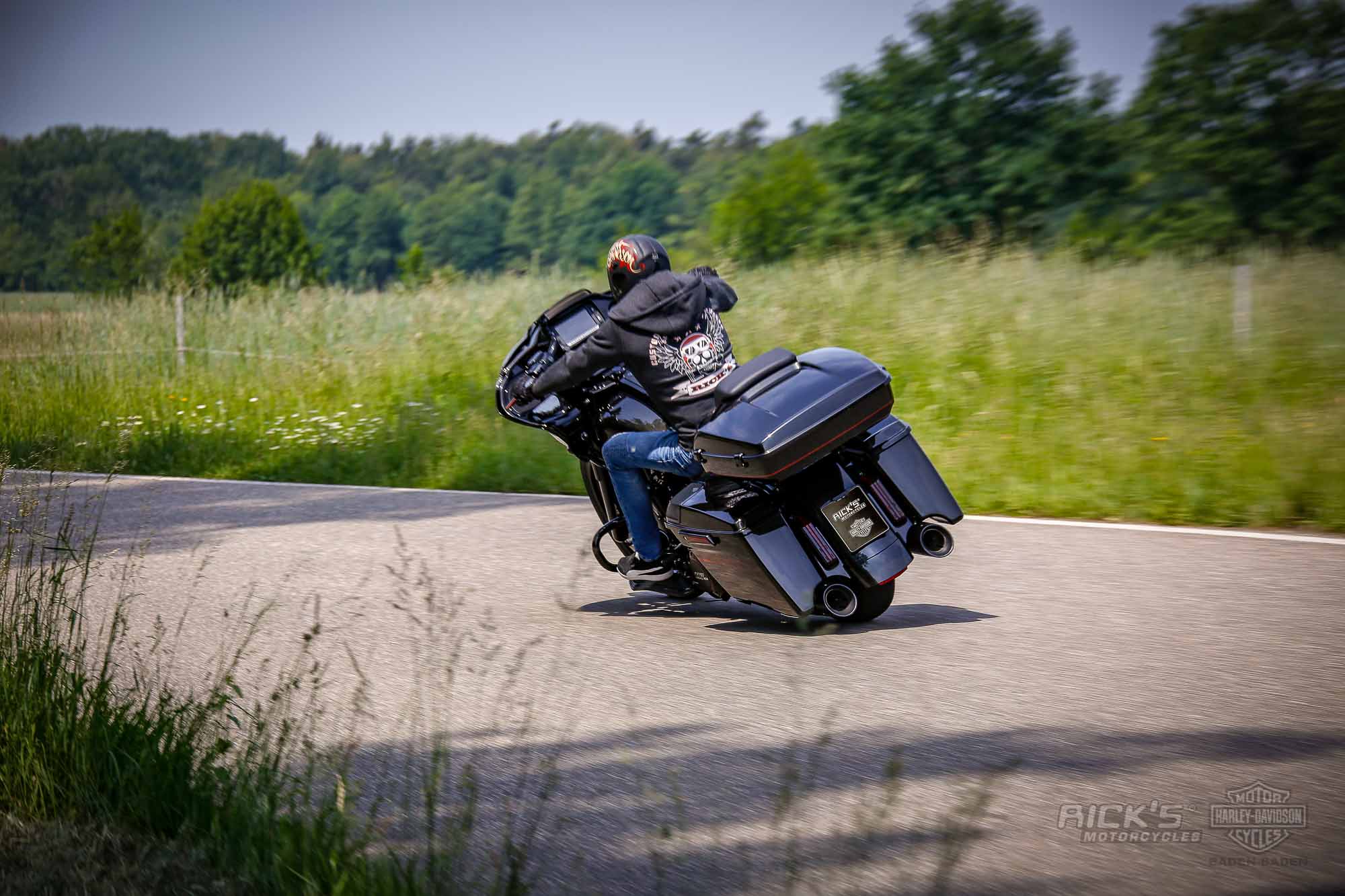 Finally, it is worth having a look at the numerous extras which distinguish this CVO Road Glide from others of its kind. Screamin’ Eagle stands for the performance parts of the Harley-Davidson Motor Company, which indicate power. The striking signage is on the open air filter and the exhaust system, which were both ordered in black. From the comprehensive P&A catalog of the Company are also the floorboards, the grips and the foot controls, as well as the mirrors, which were mounted below the handlebar, and the additional headlamps. 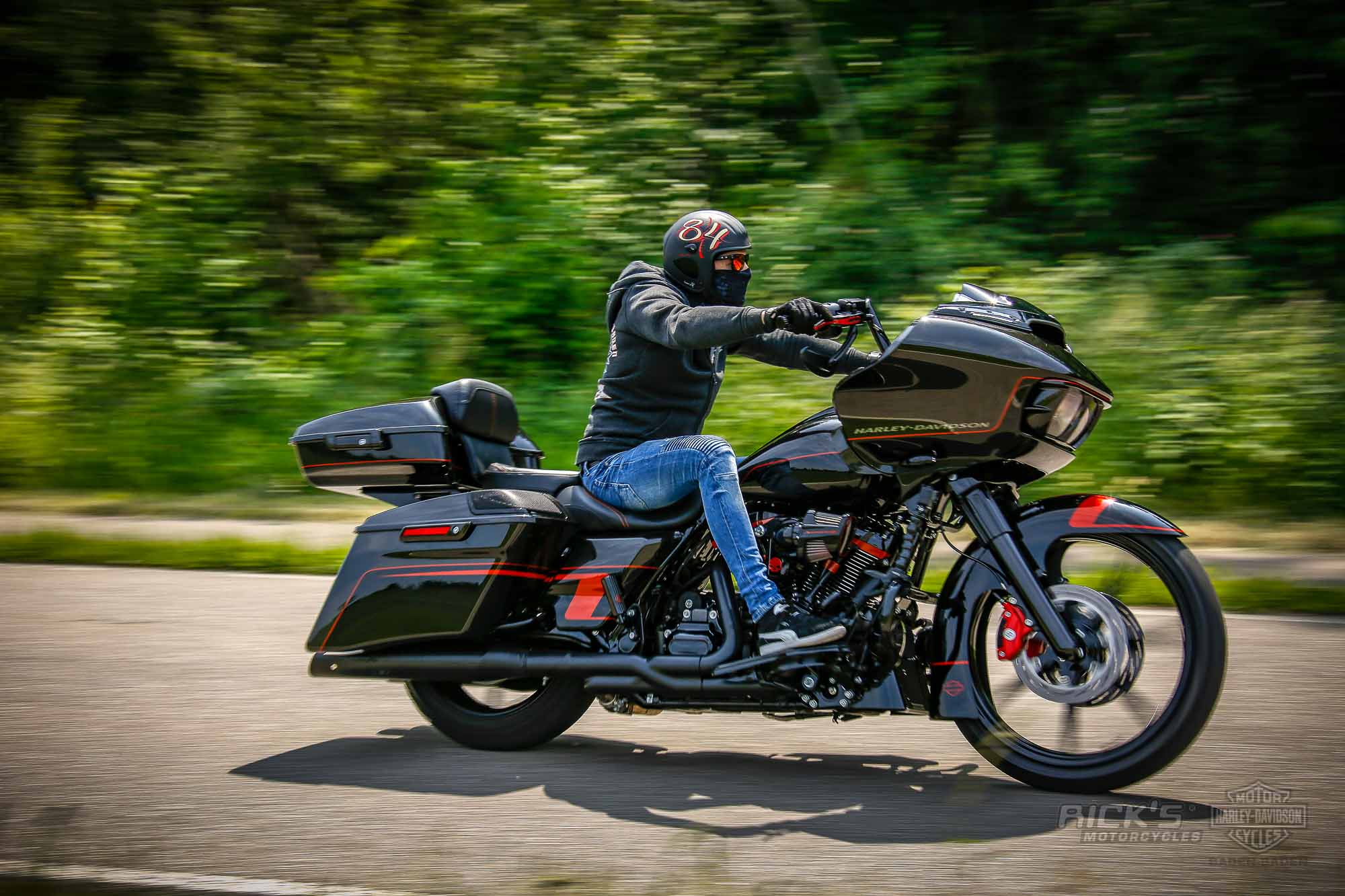 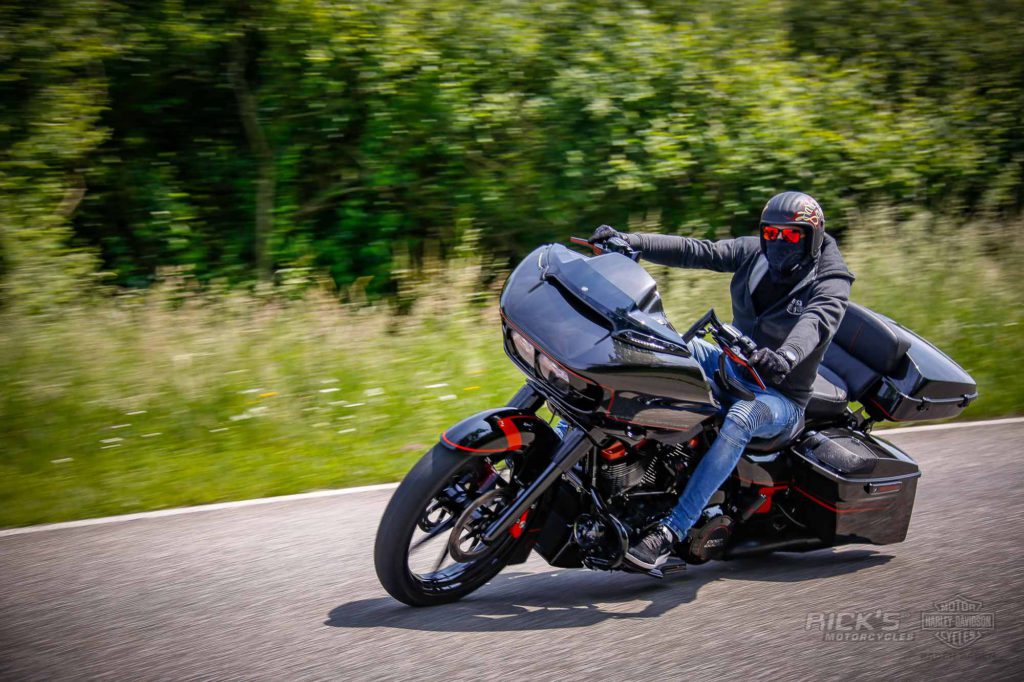 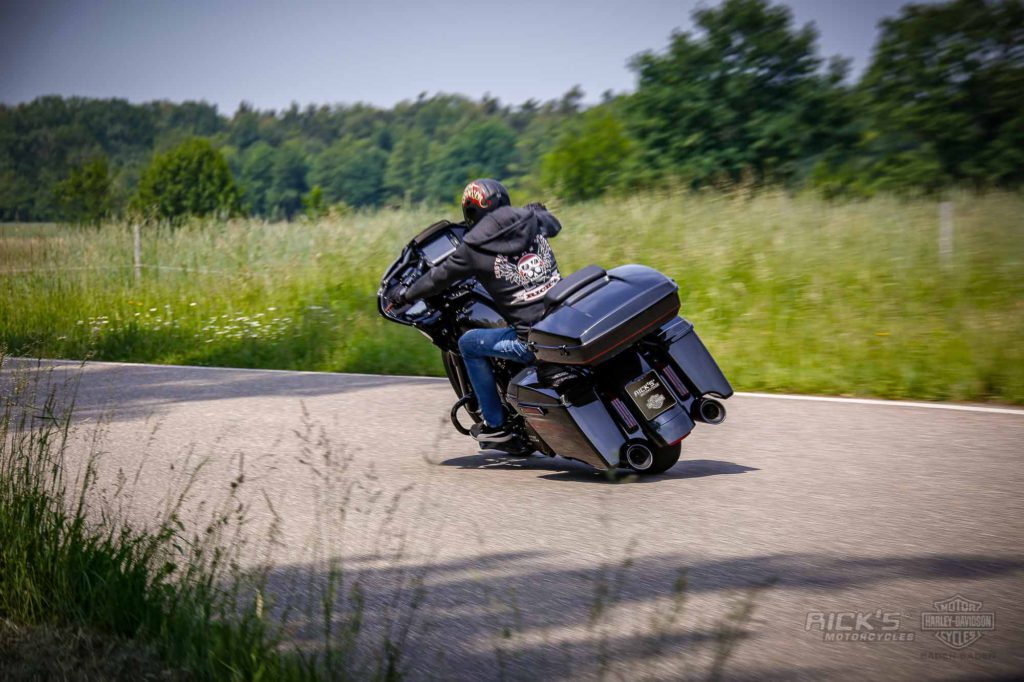 If changes to the air filter or the exhaust are made, it is advisable to do a mapping. For this reason Rick’s has its own Dynojet Center, on which all riding situations can be simulated and all components can be adjusted and matched to each other.

One could write more about the small and beautifully shaped indicators below the fairing, the levers or any other gimmicks which can be found on this Tourer, but we save you that on this occasion. The bike has long been with its new owner, and should you meet a grinning Road Glide rider, it could be one of Rick’s satisfied customers!