Harley-Davidson Touring models are slow, big beasts and not able to accelerate quickly at the lights? Well, that may be the case, but Rick’s Street Glide proves that it can also be different, improved greatly
at Rick’s in terms of performance and acceleration. This ‘power package’ combines qualities like sitting comfort and luggage space and a navigation and sound system of a tourer with the genes of a sprinting high-performance sportsman.
And if this wasn’t enough, the Street Glide was also given an optical makeover…but let’s look at one thing after the other! 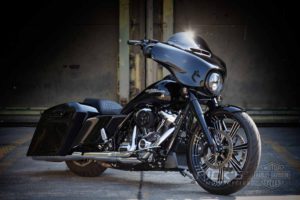 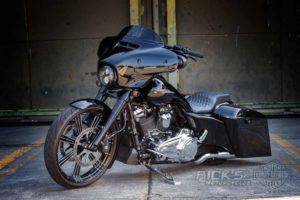 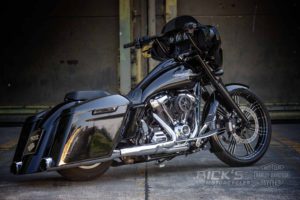 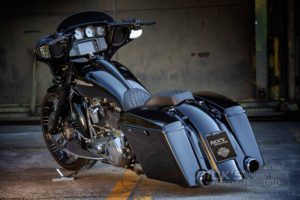 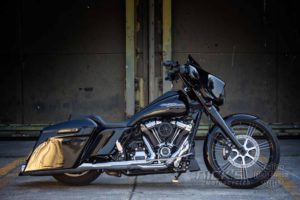 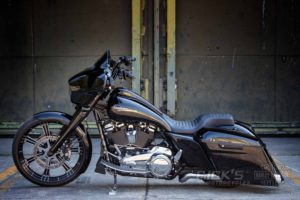 It is possible to order the components for such a power improvement already from the Harley-Davidson factory. Screamin’ Eagle is the name of the performance department and those parts from the Company. Four different stages make it possible, depending on personal requirements and spending power, to increase almost every model’s performance. The stock gearbox offers enough reserves, which allow this performance tuning and, depending on the stage, can be applied at any time. Stage 1 can, however, be replaced with Stage 2 later, and Stage 2 with Stage 3 and Stage 3 with Stage 4 as well, but  on this Street Glide it was clear from the start that it needed the possible maximum upgrade.

Stage 4 means new performance components like new camshaft, new valve train, new Rick’s performance air filter, new big bore cylinders and pistons, new throttle housing, CNC machined heads, and besides many other parts, not least of all a new mapping adjustment.
At Rick’s Motorcycles they have the advantage of having one of the most modern test benches for this purpose, where all parameters can be adjusted to the finest tolerances, so that the best mixture can always be achieved, and it is not only about maximizing performance, but especially to optimize ride performance. If the acceleration is too aggressive, then each bend becomes a challenge and each roundabout a gamble. 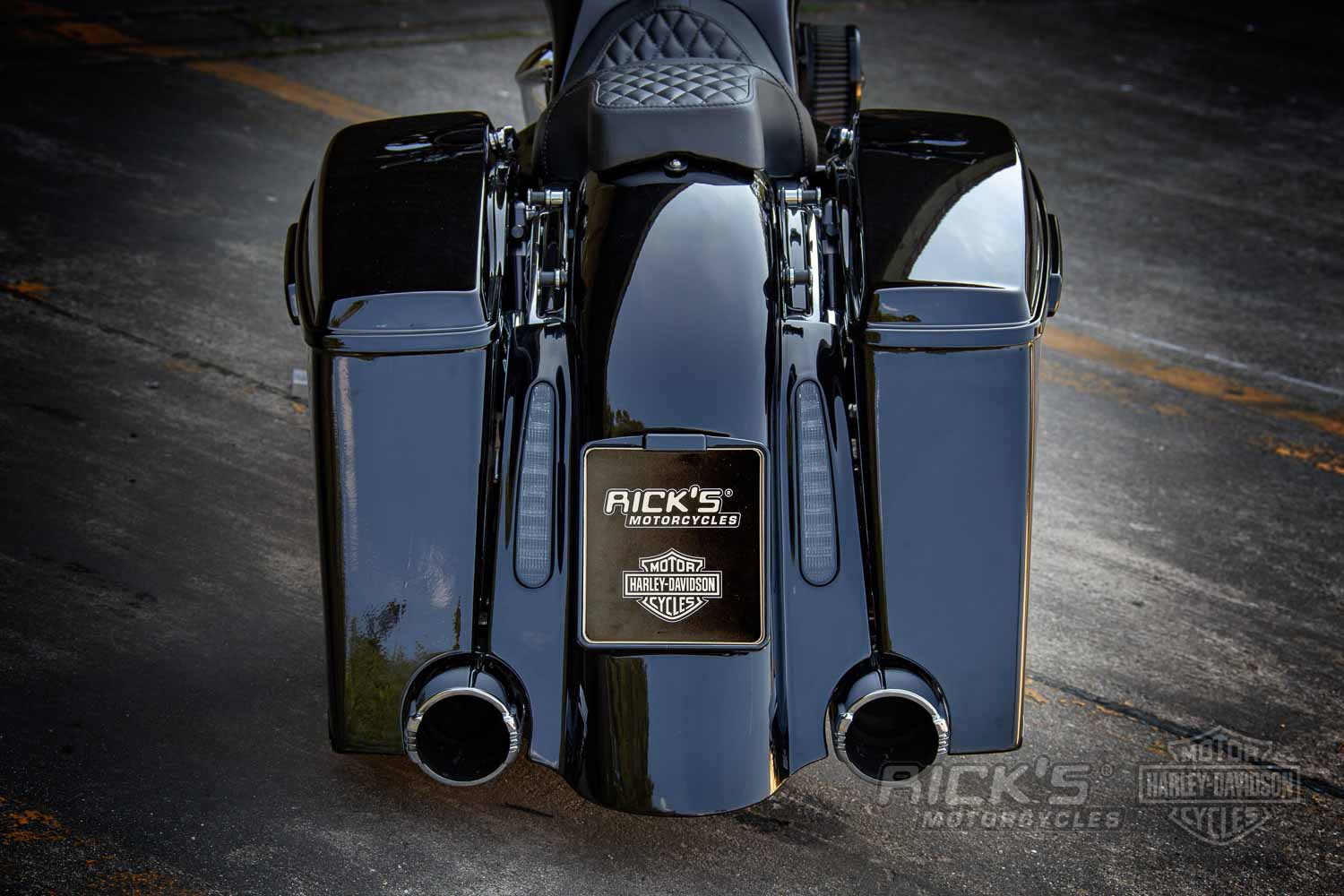 The Stage 4 kit and the new mapping provide excellent propulsion, but another, not visible detail ensures another benefit. We are talking about a fully automatic clutch. The Rekluse clutch works similarly like on a scooter, which also works without a clutch,
only this product is aimed at the torque-heavy Milwaukee engines. Using gears without a clutch achieves extreme acceleration, but also has another advantage. When standing at the lights for example, the clutch can stay engaged, no need to go into neutral.
When the traffic light goes green, opening up the gas is enough. Manipulating the clutch in a roundabout to slow down is also eliminated with the Rekluse clutch. This feature alone reduces the stress factor and also saves the fingers of the left hand. 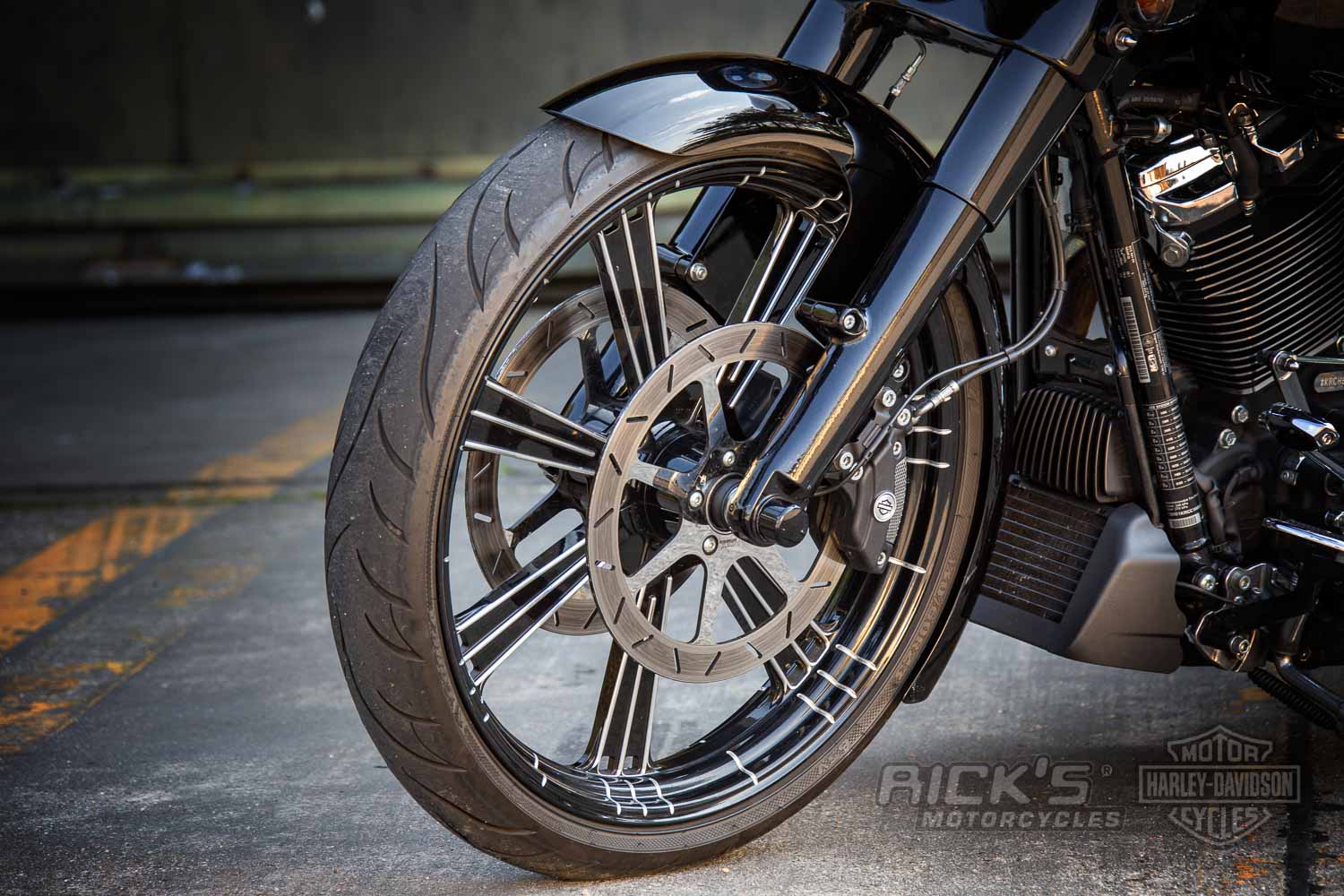 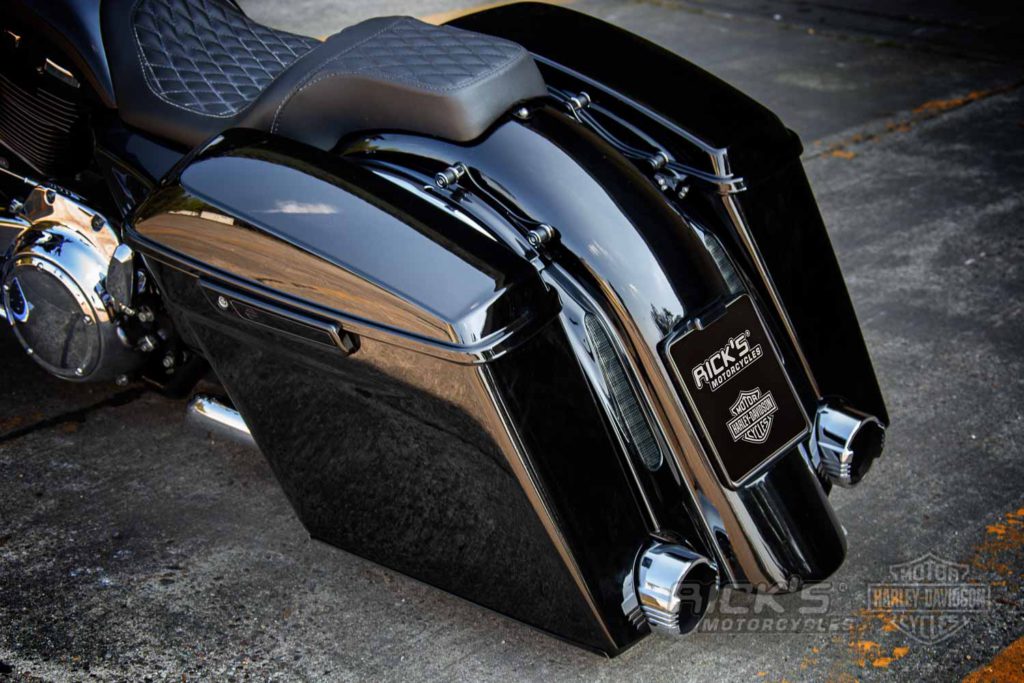 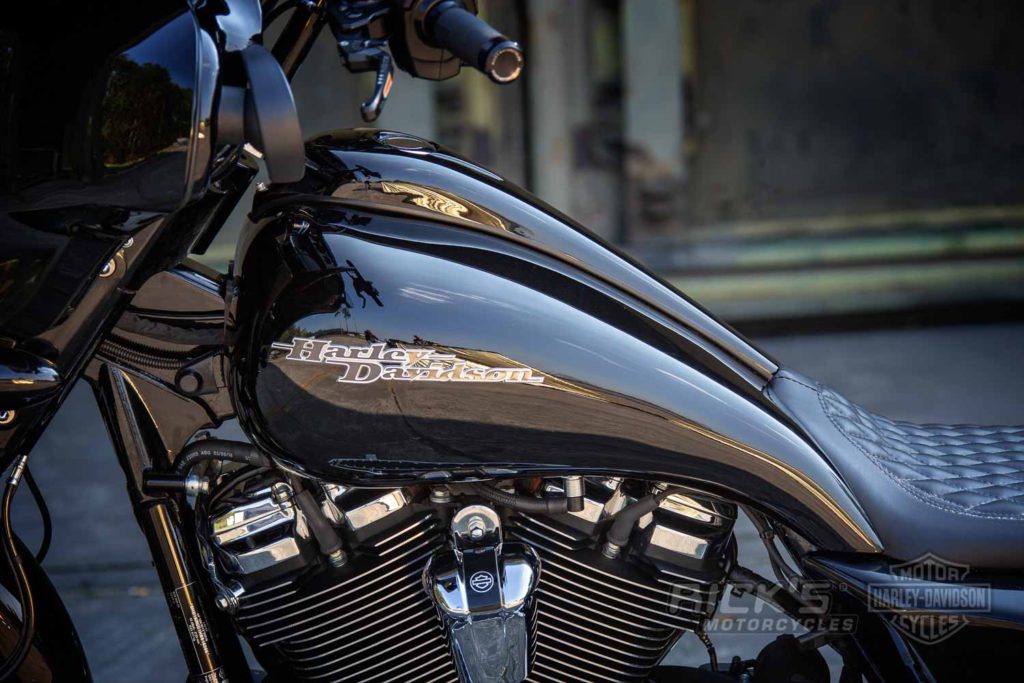 So much for the technical upgrade, but also optically quite a bit was done to the bike. For the front end a 23 inch wheel from the large range of Rick’s design wheels was chosen.  For the touring models completely new triple trees were developed, which were adjusted to 21, 23 and 26 inch wheel sizes, with which despite the large wheel dimensions ride properties are being kept close to stock. The design used here is called “Rick Rod”, made in bicolor, matching the other bike colors.
For an upright sitting position, Rick’s Street Glide handlebar was mounted, which comes with German TÜV. The tank elongation is just a cosmetic improvement and doesn’t increase the tank volume, but the reservoir now stretches in a light bow over the motor.

The luggage set is also from Rick’s, and the case and fender combinations are constructed so that the black CVO rear light fits into the cut-outs. The reason why the bike sits so low at the rear is because it has an airride system with which at the push of a button the Street Glide can be lifted and lowered to any level within seconds.
This Street Glide is really a wolf in sheep’s clothing as the subtle design does not show what a power package hides under the tank, and the trick with the clutch is the icing on the cake. So, if at the next lights an unassuming Street Glide should pull away from you rather quickly, it could well be that the rider didn’t even intend to do this, but you will know who made this miracle of acceleration!
Text & photos: Peter Schulz