To equip the Harley-Davidson Fat Boy with the Stage 4 kit to provide even more performance produces remarkable results. In addition, Rick’s also improved the Softail in terms of looks and customized it according to the motto “everything please and only the best”!

The Milwaukee-Eight Fat Boy produces 114 ci when it comes out of the factory and 90 hp. These are impressive figures which guarantee enough power at all times. Harley-Davidson’s in-house tuning department offers kits for almost all models with which the power can be increased even further. These Screamin’ Eagle Stage kits come in four different configurations, which build on each other. On this Fat Boy it was decided to use the fourth and maximum build stage. 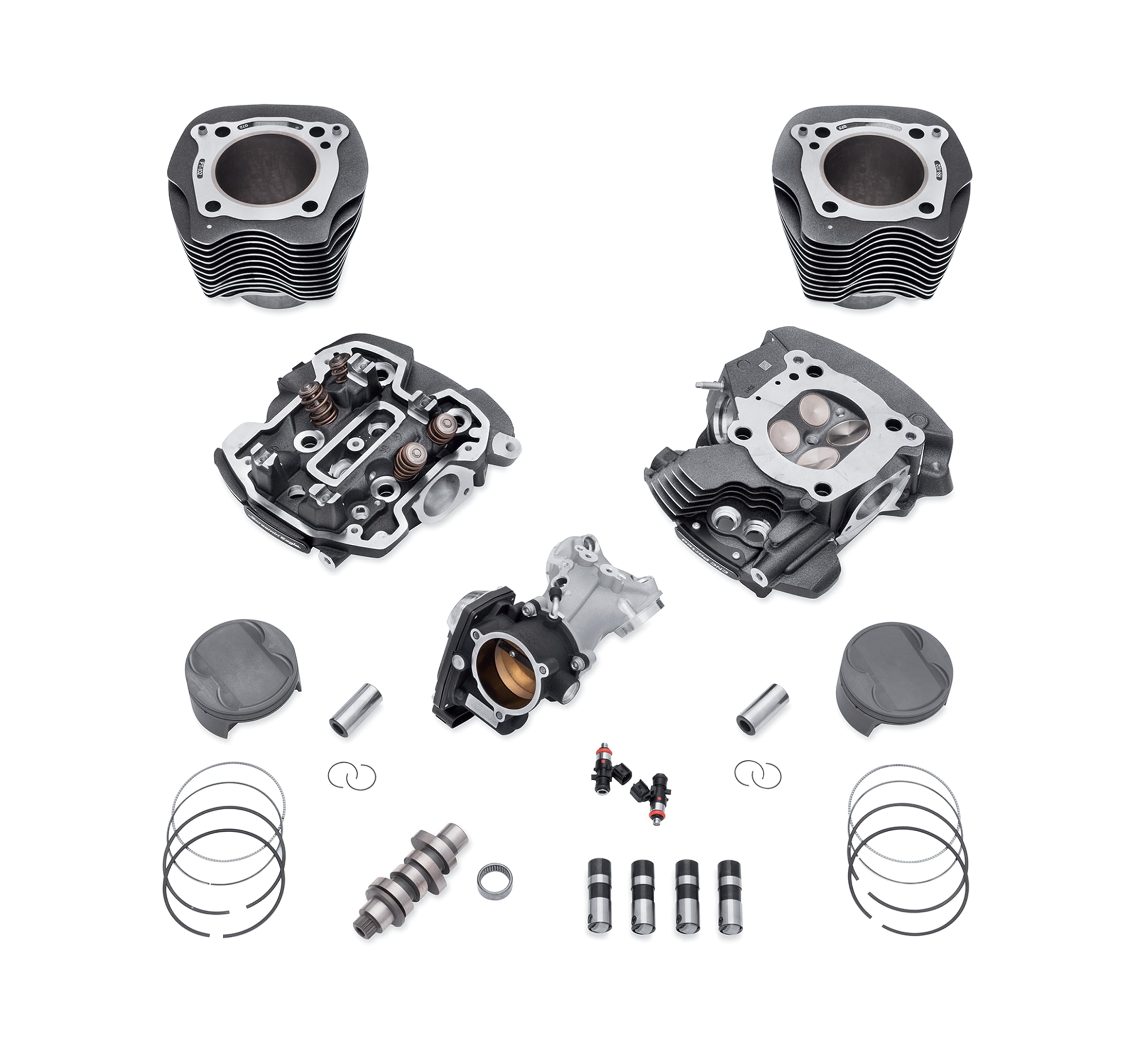 Harley-Davidson promises a torque increase of up to 40% and a power increase of up to 50%. The necessary Screamin’ Eagle Stage 4 kit replaces numerous motor components with parts developed to give more power. Stage 4 kits for the Milwaukee-Eight motor have new CNC-machined cylinder heads with 1 mm larger valves and fully worked on combustion chambers. Together with the high-lift SE8-517 cam, the highly compressed pistons and the 64 mm throttle valve, as well as the new intake manifold, this combination delivers a torque of 180 Nm and power of up to 121 hp at the rear wheel, according to the manufacturer. 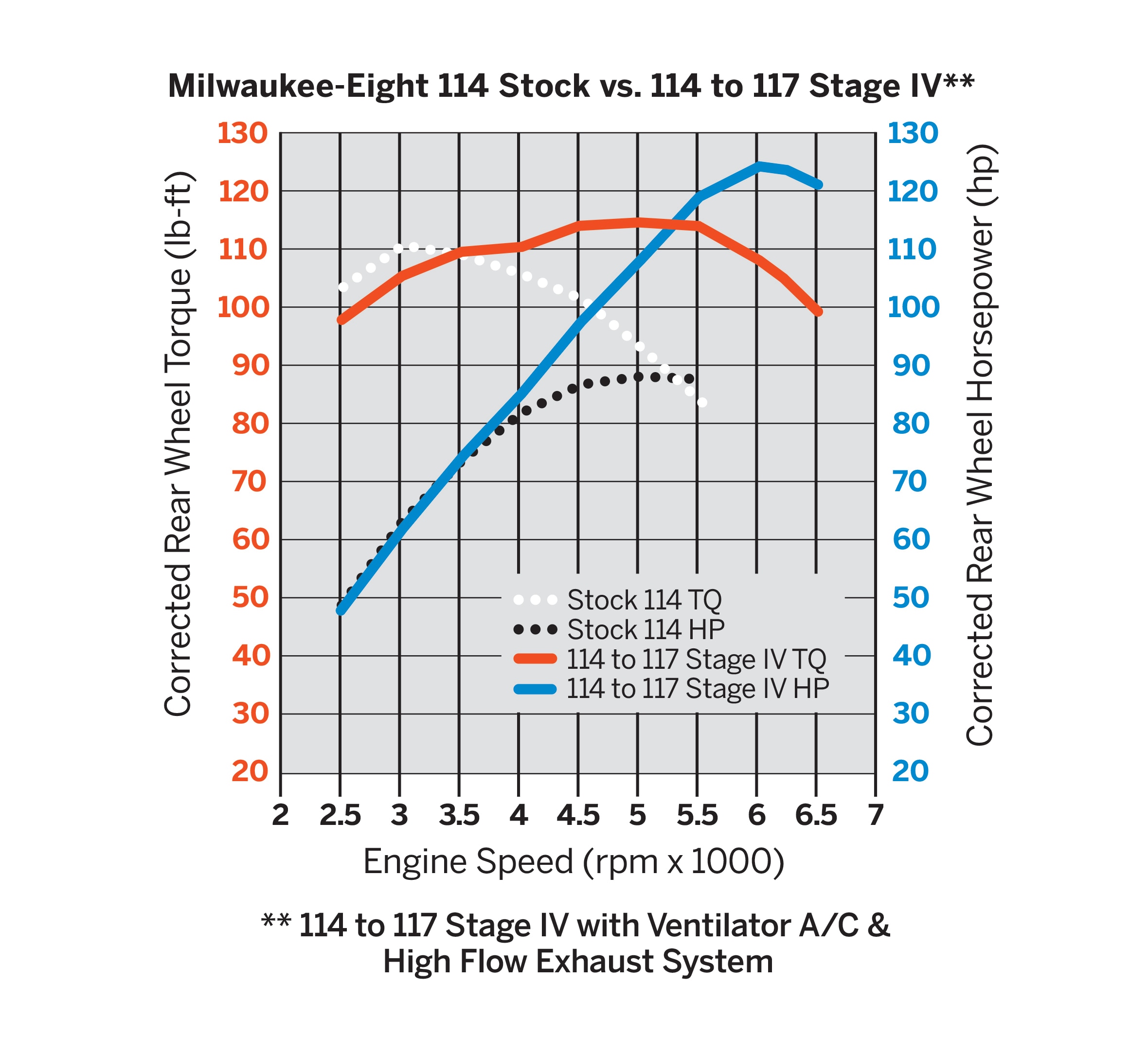 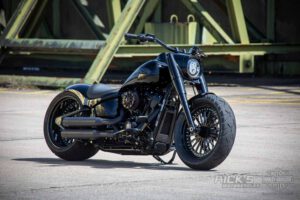 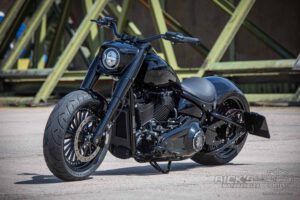 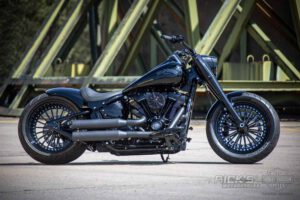 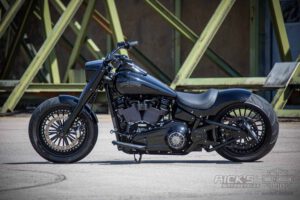 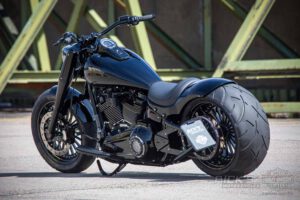 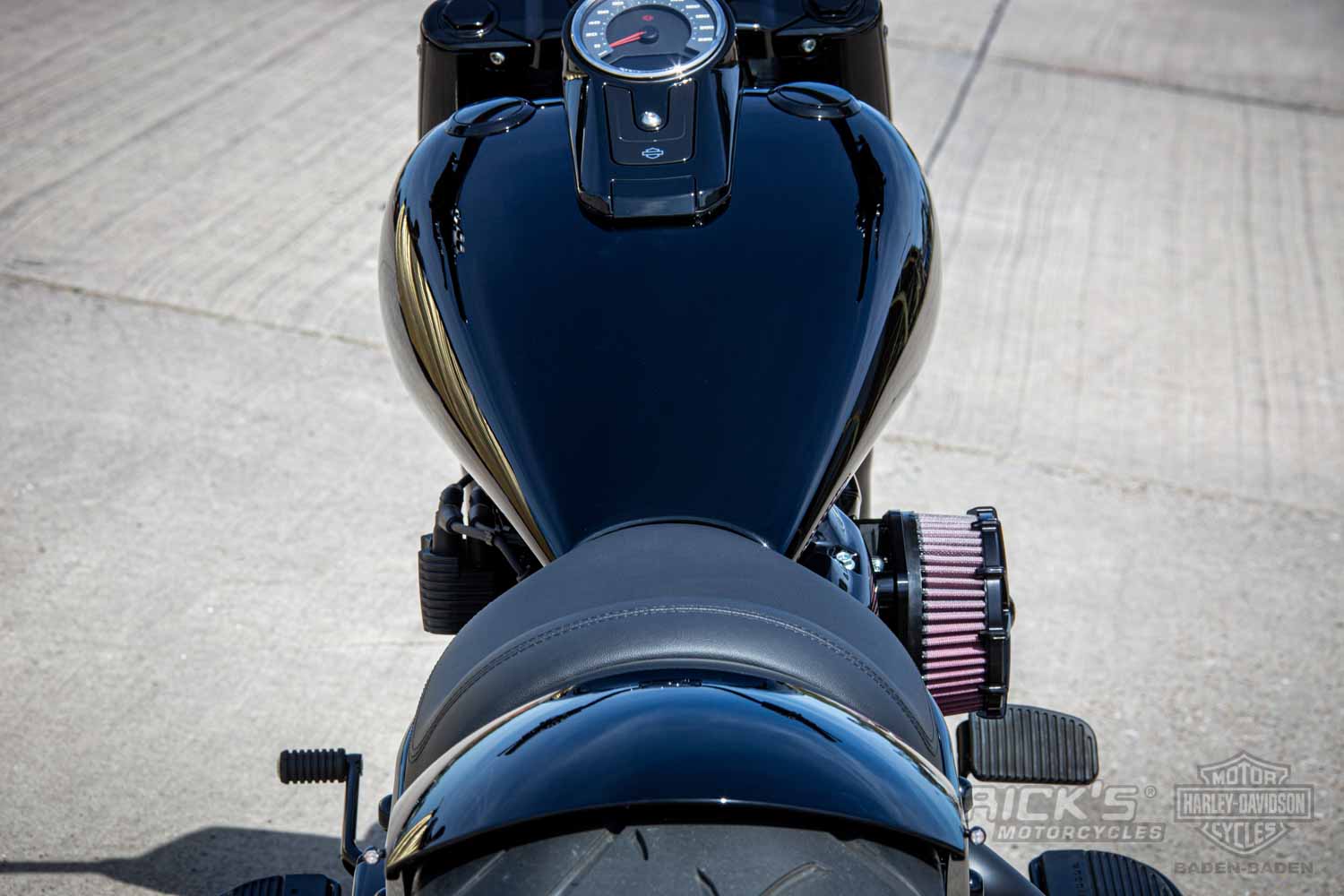 Up to here, a very powerful drivetrain has been configured, but the exhaust system and the air filter are still missing. It was decided to use an electronically adjustable exhaust from KessTech. Rick’s design air filter not only looks good, but thanks to a flow-optimized construction, has a maximum airflow rate and therefore offers the largest possible performance. So many new components can, of course, not work with the stock engine. The fuel mix preparation has to be adjusted to the new conditions. Rick’s has a very modern dyno test bench on which almost any riding situation can be simulated under laboratory conditions. Trained employees can here precisely adjust the motor management and get the maximum out of the engine. 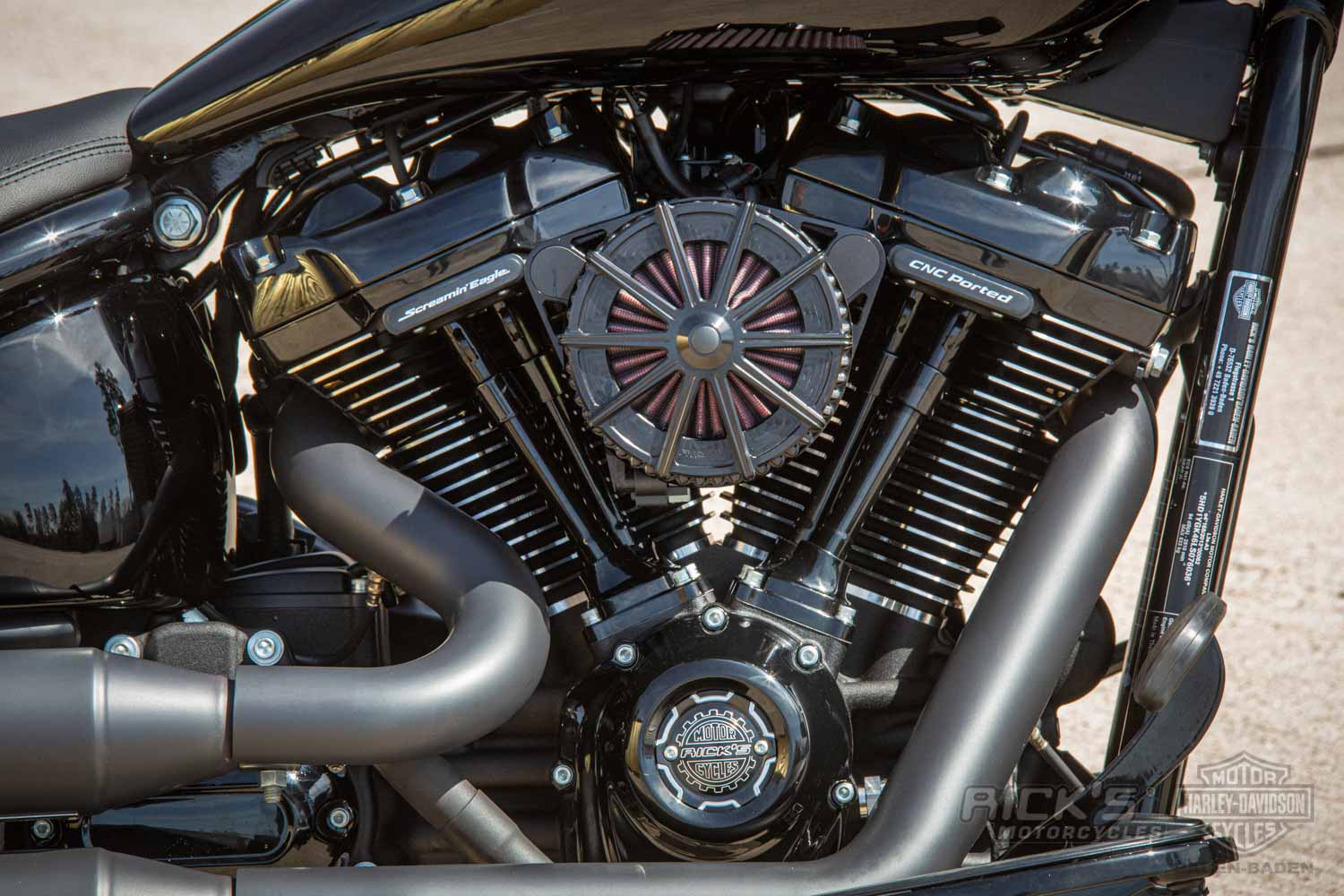 A custom bike consists, of course, of more than the drivetrain. While the lettering “CNC-ported” and “Screamin’ Eagle” on the cylinder heads indicate a power increase, customizing is more of a visual improvement.

Let’s start with what catches the eye first, the complete rear conversion. This bike now rolls on a 300 tire, and for this purpose Rick’s has constructed a special swingarm kit with which the XXL tire can be placed centered in the track of the bike. But the tire now being centered means the belt drive can no longer be guided past the tire. With Rick’s Fat Ass swingarm, a simple but at the same time complicated solution has been found. While the stock version makes do with a long belt, in order to transfer the power to the rear wheel, Rick’s uses two small belts. While the first one is left in the stock position and led onto an interim shaft, the second belt has been positioned to the outside. Considering which kind of powers pull on the belt, it is easy to imagine what feat the constructors at Rick’s have achieved here. 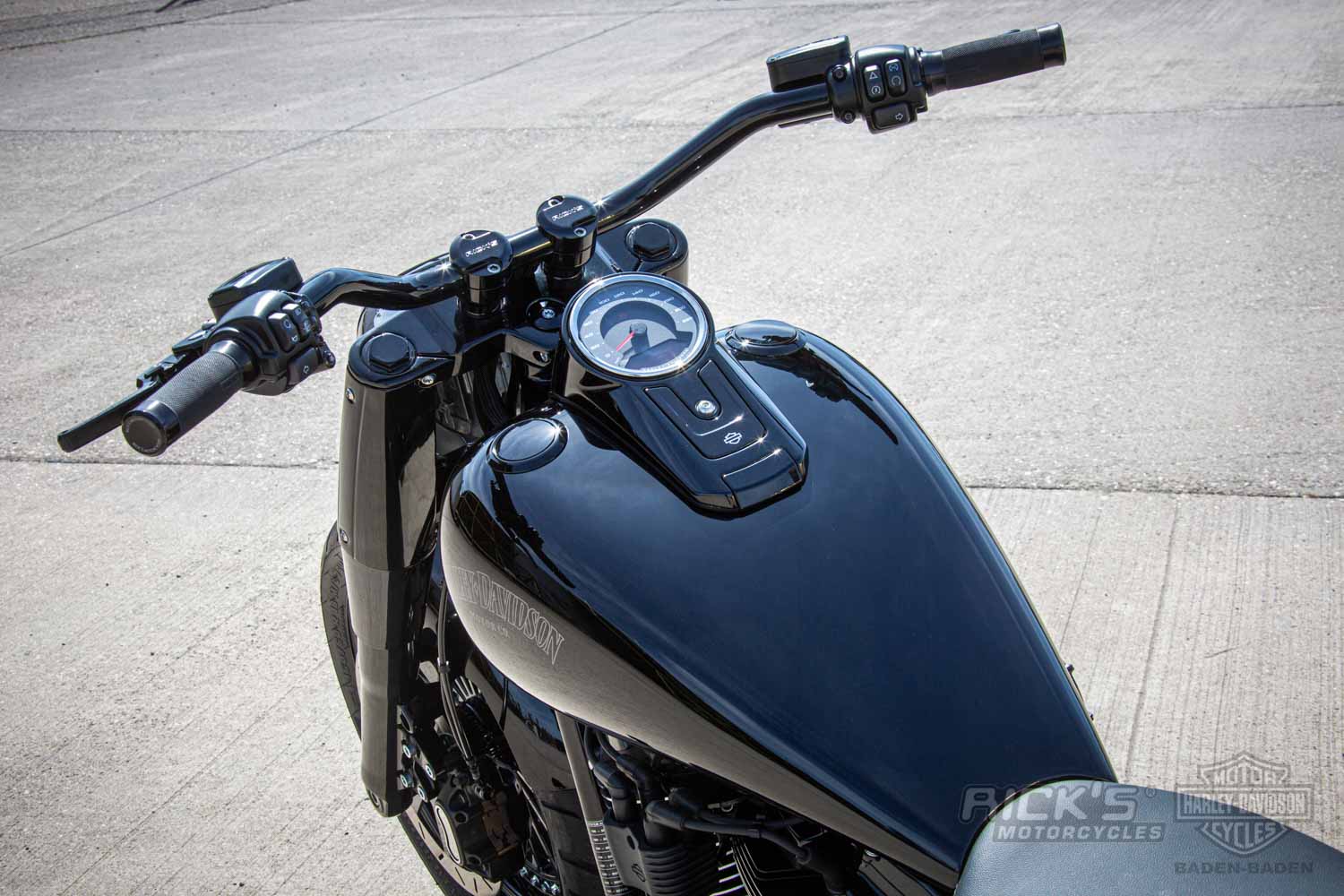 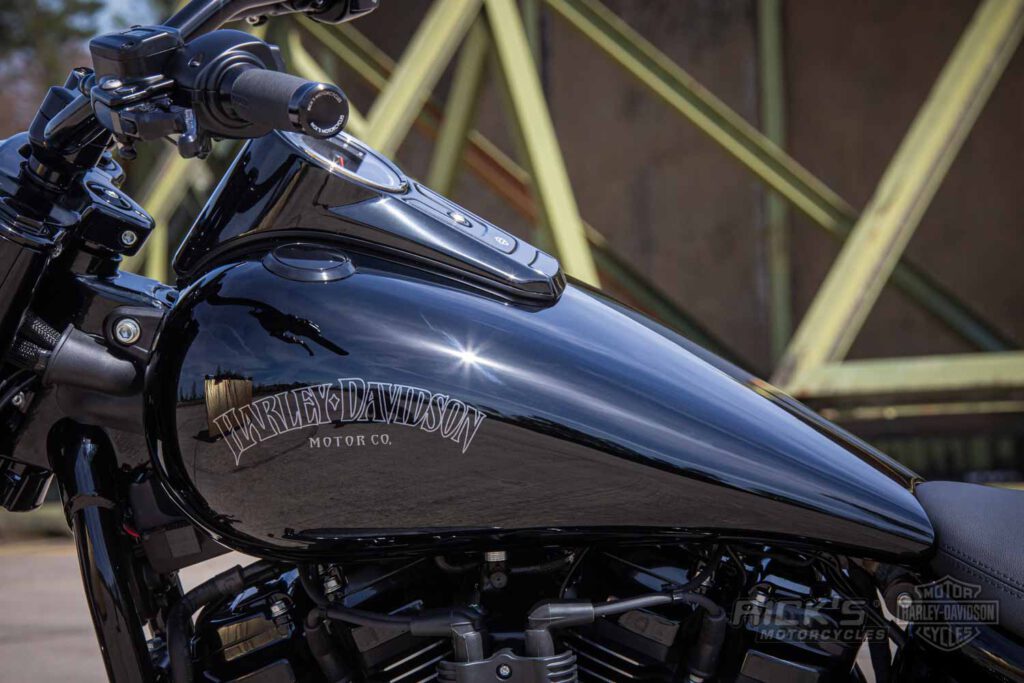 Such an extremely wide tire does no longer fit onto the stock wheel, so a new one had to be sourced. Chosen was a Rick’s Motorcycles design wheel, which is available under the name ‘Supersteve’. While at the rear a 10.5 x 18 inch wheel was mounted, at the front one with the dimension 3.5 x 18 inches was selected. The wider tire also needed a new fender. At Rick’s, rear fenders are made in small series for almost all Harley-Davidson models. On this Fat Boy, however, the love for detailing has gone one step further and added to the steel part was a frame cover with which the frame tube below the seat is covered. The drive pulley and brake discs are also made by Rick’s and match the wheel design, and the rear disc was placed on the left side so now the right side of the wheel is unobstructed.

Next the tank is worth mentioning. So that the reservoir, as can be seen in the pictures, stretches in a soft arch over the cylinder, the stock tank was elongated and brought into the desired shape. For the sake of completeness, we’d like to mention that the handlebar, risers, grips and levers are also made by Rick’s. Only the indicators were ordered from Kellermann, and while at the front the ‘Atto’ was fixed with Rick’s adapters onto the mirror screw, at the rear the ‘Atto’ DF 3 into 1 was used.

With this custom bike, Rick’s has pulled out all stops by using many of its own parts and showed in an impressive way that a Fat Boy can become a bike that speaks to all the senses…the eyes, the ears, you can feel it and it represents good taste. And in addition, it certainly won’t be left behind at the next traffic light sprint!