The Fat Boy models have right from the start without doubt always been the most popular models in the Company’s portfolio, and that should also not change with the new for 2018 variant of the Milwaukee-Eight Fat Boy.

At Rick’s Motorcycles they took the successful model and gave it a special treatment, the result of which is convincing and can be called typical Rick’s! 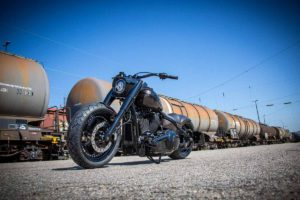 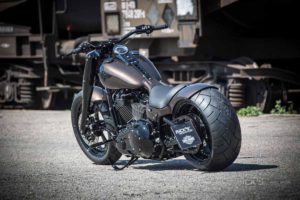 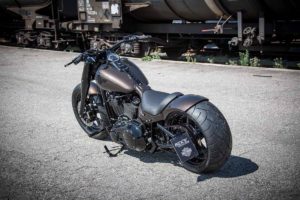 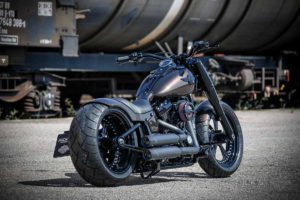 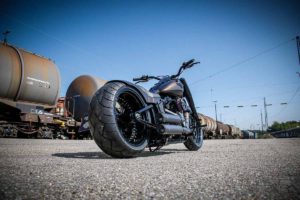 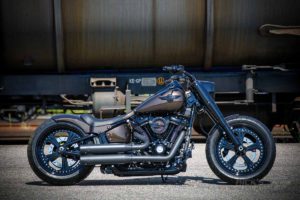 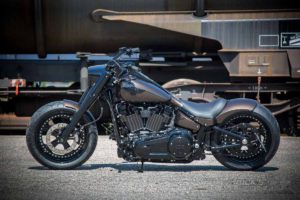 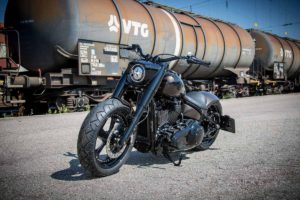 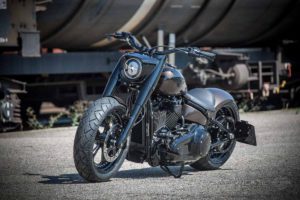 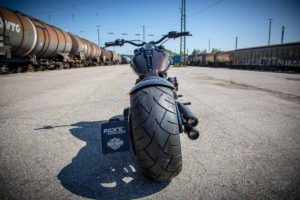 But what exactly is “typical Rick’s”?

A short and justified question, which could be answered in length. The philosophy of the parts manufacturer is to customize with less colour effects and loud designs, but rather concentrate on classic lines and develop timeless custom parts, which are then made to perfection. If you look at the gallery of bikes on the Rick’s website, you will see that this archive has bikes which were built 25 years ago. Almost all have one thing in common, namely that they carry the signature of the designer, and most are still as beautiful as when they were created. Worldwide there are not many customizers who have achieved this, and this latest Rick’s Fat Boy interpretation can also be called a real classic, a real Rick’s custom bike.

What exactly was changed on the Fat Boy?

For a start, it received fatter tires. At the front is now a Metzeler ME880 160/60 R18, and at the rear the same tire but with the dimensions 260/40 R18. As carrier for the black rubbers, Rick’s design wheels were chosen. The 3-part wheels are called “Gimmi 5” and for this project were coated a shiny black. Matching the “Gimmi 5” design, the parts manufacturer also supplies the brake discs. Talking about the brakes…have a look at the rear wheel, in particular the exhaust and “pretty” side…in order to achieve a clean look, a so called “drive side break system” was installed, with which the disc can be relocated to the other side. This is, of course, also one of Rick’s own developments, which is offered for all Rick’s wheels. The matching covers were also developed and made by Rick’s. Most remarkable is the rear fender. We won’t go into how difficult it was to develop this part. Design ideas are one thing, the later production in small series another. Everything on the new Softails from model year 2018 is different, and apart from the experience gained over a quarter of a century of building custom bikes, nothing could be reused. At Rick’s they scanned the new Softails up to the last screw. As this was very time consuming, new parts came relatively late onto the market, but it meant that every part can now be developed optimally on the computer. Even Harleys now only have limited production tolerances, which means at Rick’s perfect results are achieved right from the beginning. The new rear fenders for the Milwaukee-Eight models from 2018 belong to the first parts which were developed in this way. Each radius and shape now perfectly match the whole line of the bike. When ordering the complete fender kit at Rick’s, in addition to the steel fender, not only the suitable base seat plate and the mounting kit are supplied, but also the tank cover, which means the piece between tank and seat, which covers the unsightly transition perfectly.

The front fender was also made by Rick’s from steel and is being offered in a short and a standard length, both of which hug the contours of the tire perfectly. 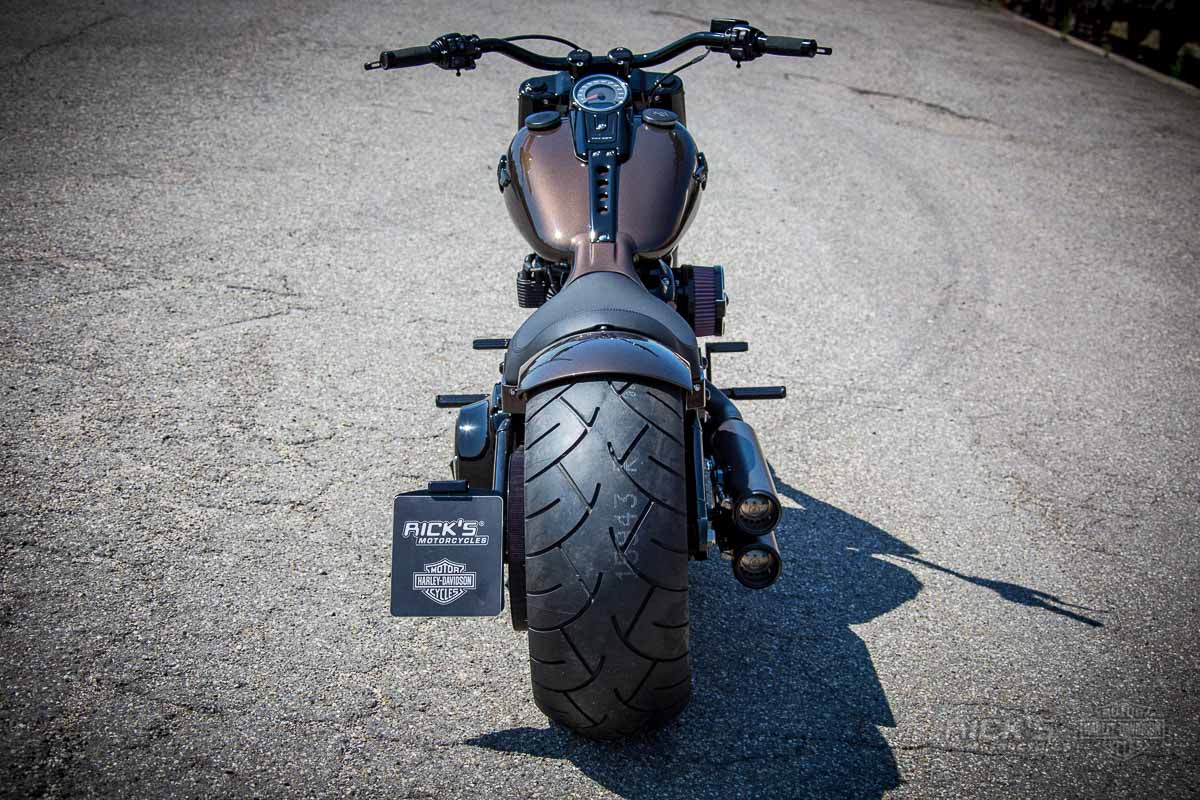 If you look at the customary foot controls and wonder that Rick’s controls also fit the Milwaukee-Eight models, you are wrong! They are completely new developed parts, which were created like the fenders on the computer. In order to assess the optical effect and later foot position, the individual components were printed in 3D and attached. The new foot controls in a classic Rick’s design are available with OE position or two or four inches forward, either in the grooved design seen here or with a round profile and rubber O-rings, and either in black or natural polished. 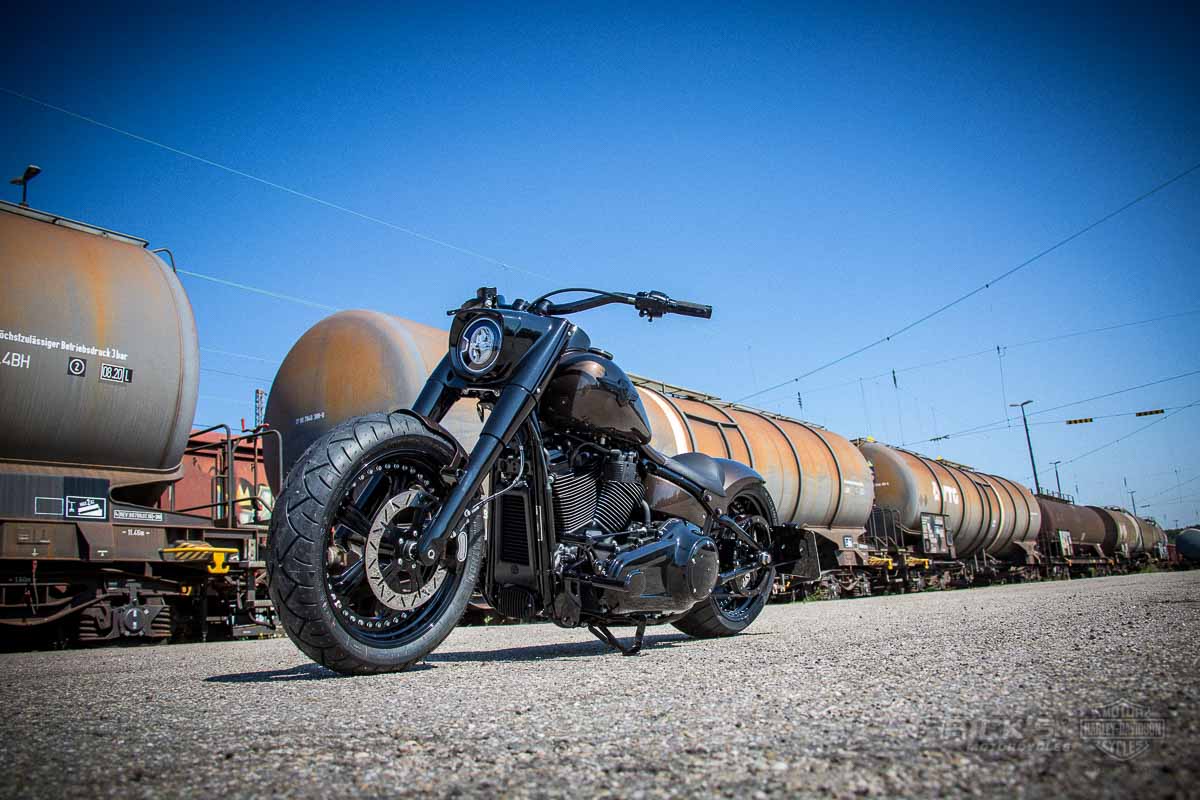 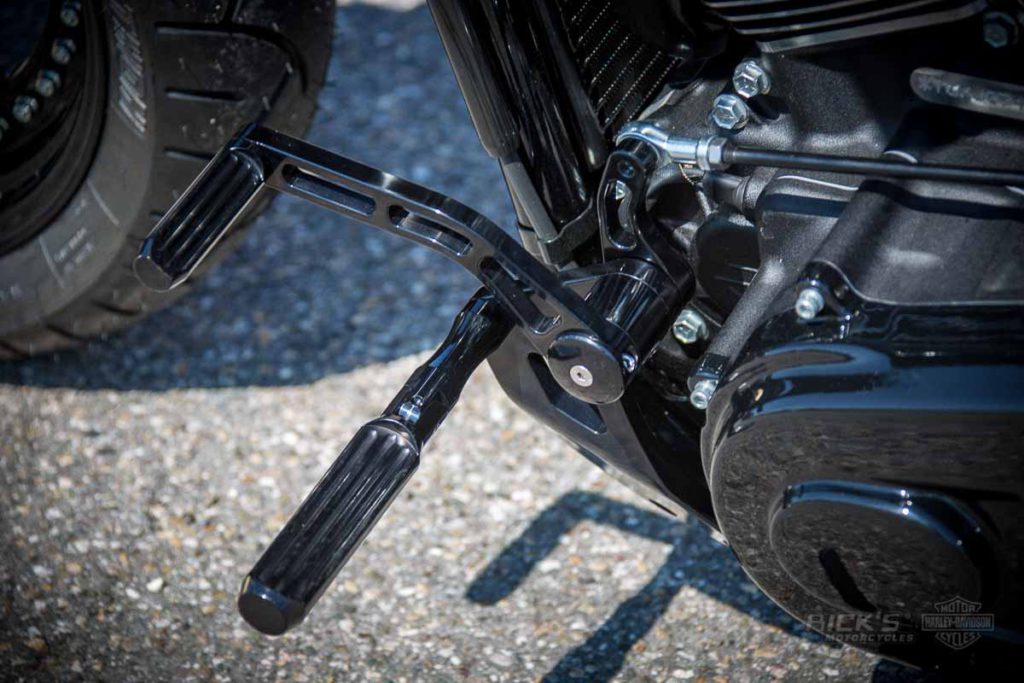 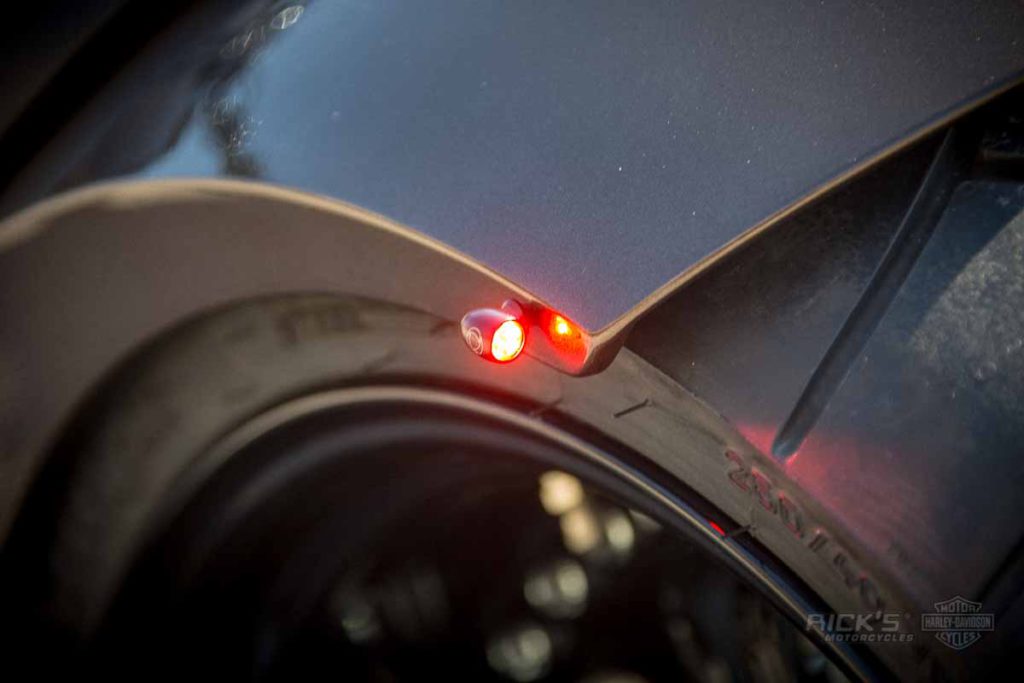 If you are wondering that something seems to be missing at the rear and the front, look closer. This bike has, of course, also rear light, brake light and indicators, and they are ‘Kellermann Atto’ units. The experts from Aachen have managed to produce an extremely small but powerful 3 into 1 indicator which has been E-marked and can therefore be used legally. To the right and left of the rear fender a small round cone of about 10 mm diameter can be found, into which the rear light, the brake light and even the indicator are integrated. At the front the indicator was mounted under the instruments, also a Kellermann product, but only serves as indicator.

The grips, brake and clutch levers are also Rick’s parts, as well as the side licence plate holders. Anything else unusual you see can safely be assumed to also have been made in Baden-Baden.

Once again, this bike proves that a consequent approach and striving for perfection leads to a result that not only convinces immediately, but also distinguishes itself positively from the products of many competitors.