2022 Softail „Fat Bob“ 114 goes wild as 300 conversion!
If there has ever been a bike in Harley-Davidson history that could be typified as “Pitbull” in terms of design and appearance, then this is truely the FXSBS “Fat Bob”! Always a bit more “massive” in its look, more powerful in its choice of engine – and with the potential to be a real “calf-biter”, the “Fat Bob”, completely redesigned for the 2018 model year, compares much better to the “Streetfighter” and “Muscle Bike” theme than to the classic and retro-looking FL Tourers or Softail Bobbers. Whereas double headlights once burned holes into the night (not so easy to get TÜVed in Germany…), the new M8-powered Fat Bob is equipped with an ultra-wide LED headlight in panorama format that makes the old chrome lights look outdated and old-fashioned. With the 114cc Milwaukee Eight engine, the “Fat Bob” is also “showing muscle”: there is plenty of horsepower and torque available at the twist of the wrist. What happens when you let the Rick’s Team “off the leash” can be seen on this “Fat Bob” conversion: the “Pittbull” becomes a real “Predator”! 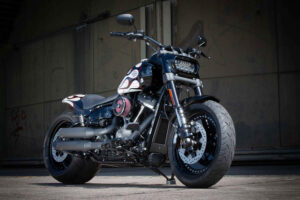 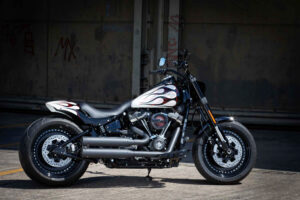 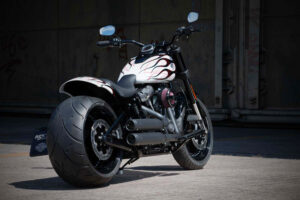 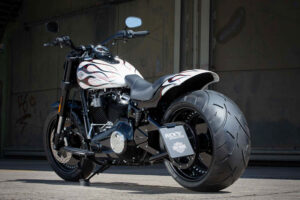 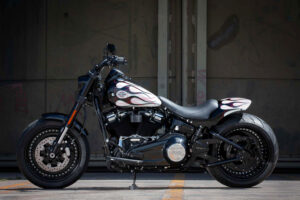 “Fatter is always a possibility” at Rick’s Motorcycles – because since its premiere in 2009, the Rick’s “Fat Ass Swingarm Kit” has been constantly been developed and upgraded. Also for tyre widths up to 360 on the completely new developed Milwaukee Eight Softails! There is no question that this radical “Fat Bob” conversion also benefits from the know-how of the Rick’s Team and, with the cool 3-piece assembled Disc Wheels, also takes a journey into the “history” of Rick’s Motorcycles.

But first to introduce the Fat Ass Kit: The swingarm also fits into the standard frame for Milwaukee-Eight Softail models from 2018-up – and even a 360 tyre runs exactly centerline. Power is now transmitted by two separate belts and an intermediate shaft precisely at the swingarm’s pivot point: this results in less stress on the individual belts and both partial belts are not additionally stretched and stressed by swingarm compression, as it happens with a single belt configuration. The primary drive remains in its stock position, neither footpegs nor running boards have to be relocated, nor does ground clearance or centre of gravity change. The components of the Rick’s kit, especially bearings and the two drive belts, have been designed and choosen for extreme stress and durability. On typical Rick’s conversions with “Fat Ass” kit, an air suspension system ensures that you can lower the tailend down to kiss the tyre when parking. 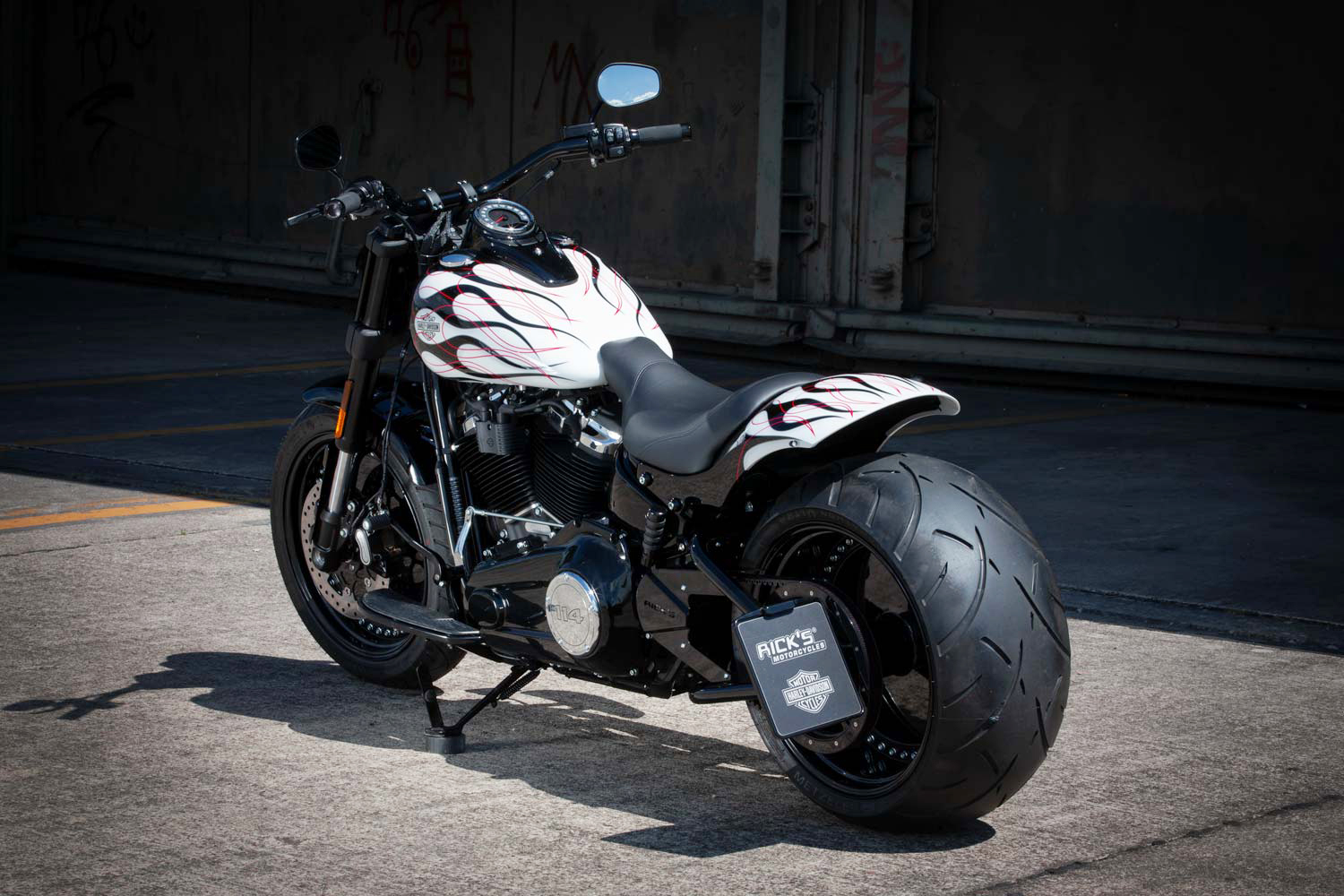 Even in stock configuration, the “Fat Bob” is already quite a statement for individuality – and so it is not surprising that this Rick’s conversion shows quite individual, wayward and unique details: The absence of an air suspension at the tailend makes this ride appear more than a bit “high-legged”, but that’s of course due to Rick’s short-cut tailend section, which is designed much smaller than the stock fender. Hand-hammered from sheet metal, it leaves plenty of room above the 300 rubber and allows impressive lean angles and suspension. Additionally, the Rick’s tailend is stable and solid enough to take passengers – check it out: the rubber-ringed Rick’s passenger pegs are not decoration! “Atto” 3-in-1 mini taillights/turn signals and side-mounted number plate make the tail section a compact unit, especially with this paintjob applied. 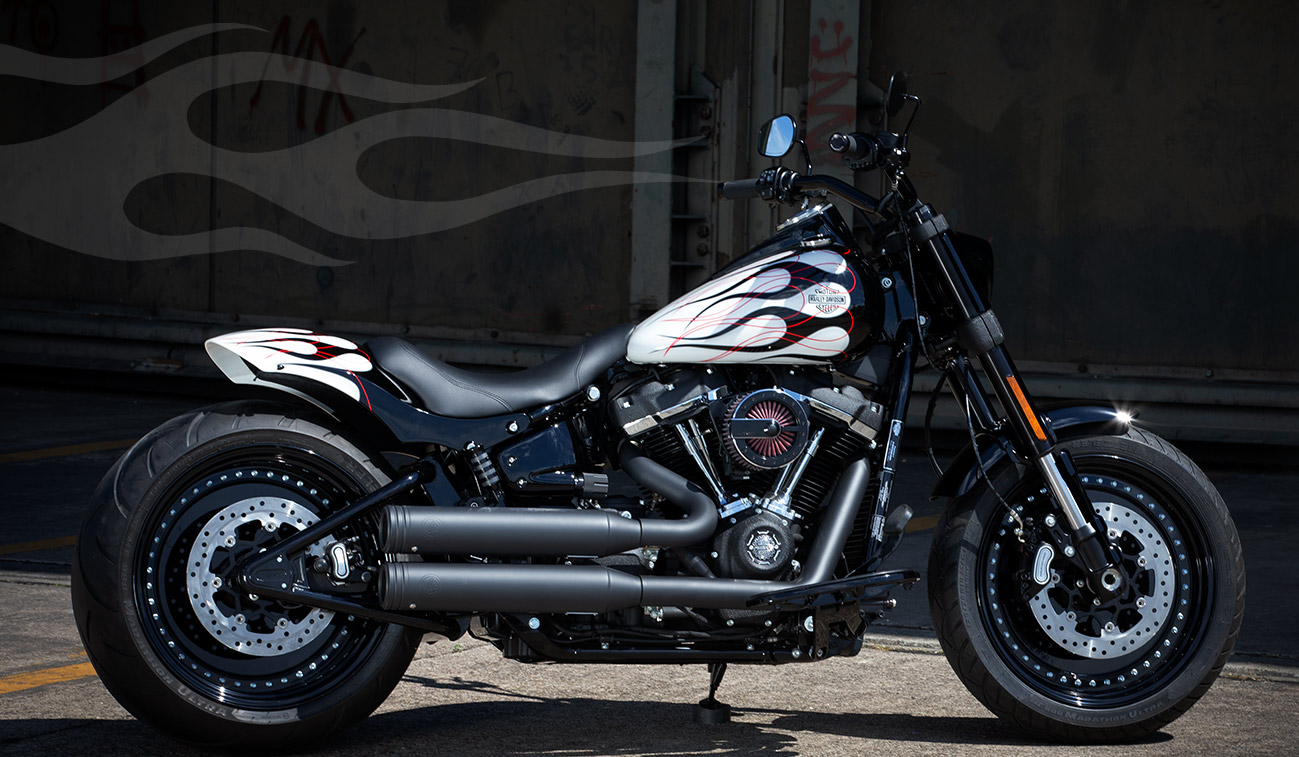 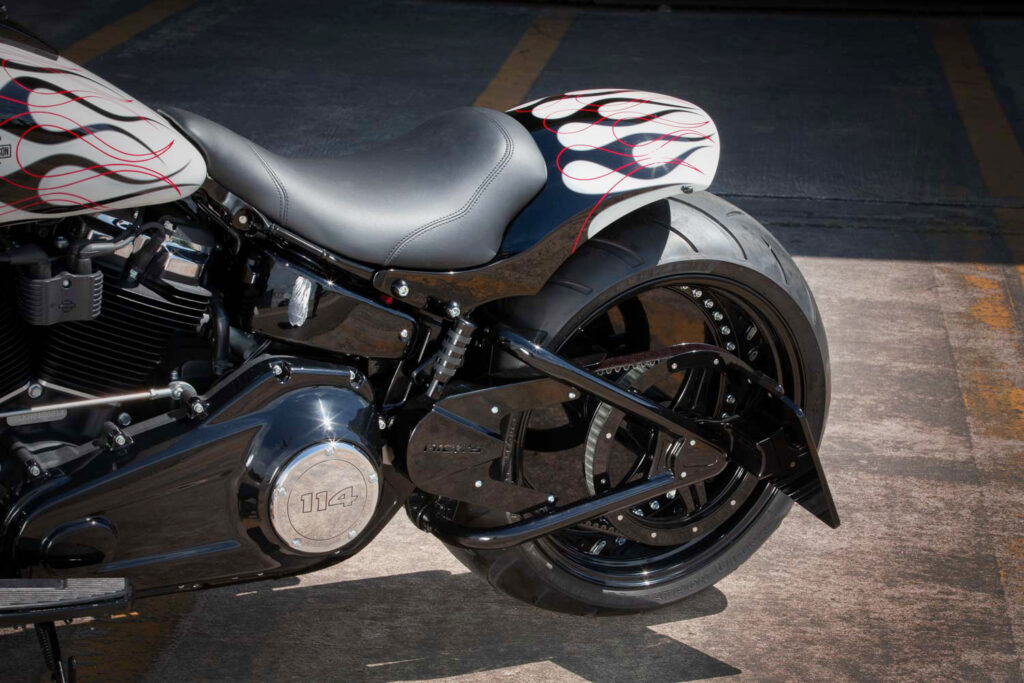 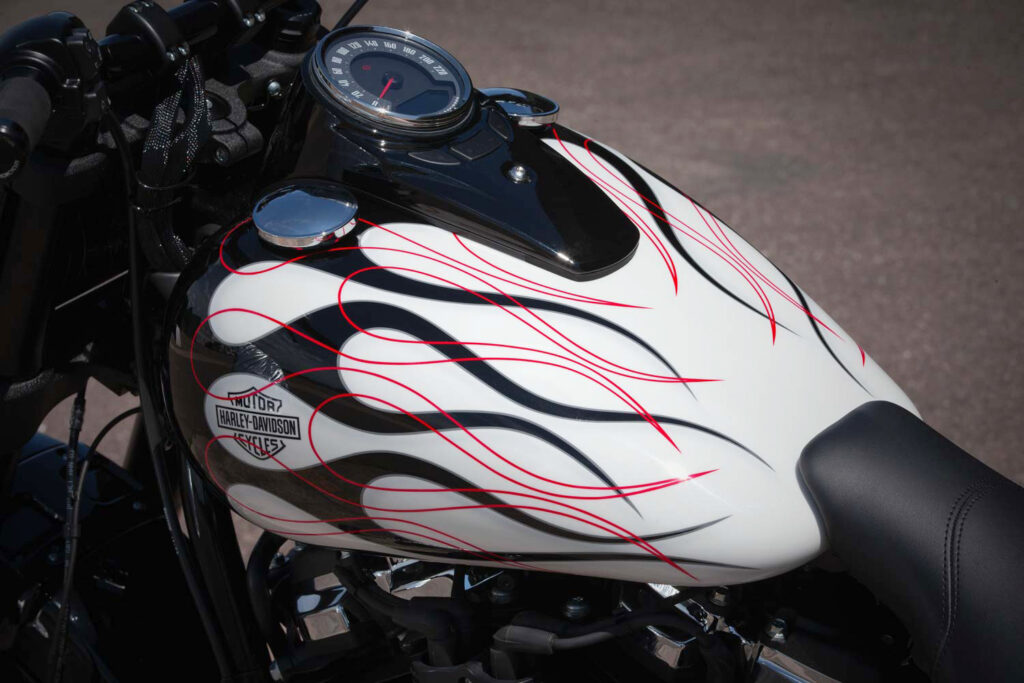 A stylistically unique approach was also taken with the seat/tank connection: Where otherwise the Rick’s tank-to-seat cover (or a Rick’s stretch tank extension) provide the visual and physical link to the stock tank, here the seat upholstering itself was extended to the tank in Super-Moto/Enduro style. Which in this case additionally supports the “Musclebike Style”. As does the set of Rick’s disc wheels in 3-piece assembled version – the wide 10.5 x 18 Inch version at the rear, the stock size under a stock fender in front. It was the widening of “Fat Boy” disc wheels which made the name for the then Rastatt-based young custom shop when Rick’s customizing history started – and todays Rick’s Disc Wheels remain a “true classic” in terms of wheel design and technology. Powder-coated in black – and in this particular case with a brake disc on the right at the rear – the “Fat Ass Kit” can be seen in a rare but nevertheless interesting version: The black powder coating of the “Apollo 5” design pulley to the final drive makes it disappears into the overall concept of the stylish flame job. The ideal complement for the engine is the “Good Guys II “Bandit” Airfilter by Rick’s – and a matt black Kess-Tech sound system provides a rich deep soundtrack whenever you want to “walk” the Pittbull. With Rick’s grips and adjustable hand levers, you have the power of the engine safely “on a leash” – until the standard running boards touch the asphalt you have to twist the throttle very hard.

Finally, this bike also deserves a comment on the “flaming” paint job, because one effect doesn’t really come into its own on 2-dimensional photos: while the black flames are framed with silver pinstripes, the bright red “additional flames” seem to somehow “fall out of the frame”. In fact, in sunlight they seem to “float” above the bike. Another highlight on a very unusual bike! This “Fat Bob” has real “bite” – and not only in terms of performance!