According to Wikipedia, “Wotan” is the God of Ecstasy. Could there be a better name for such a custom bike? Rick’s has completely dismantled the Milwaukee-Eight Fat Boy and rebuilt it in classic Rick’s style. We could keep it short and just say that on this bike everything is from Rick’s. If you’re fine with this information, then you can skip what follows and instead just enjoy the photos. All others can find further information in the text below. 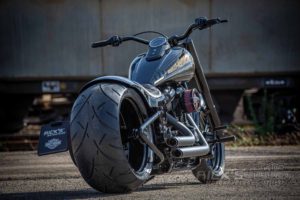 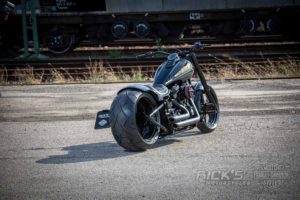 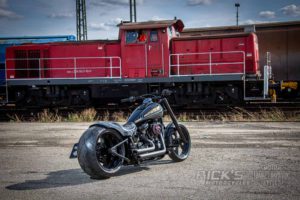 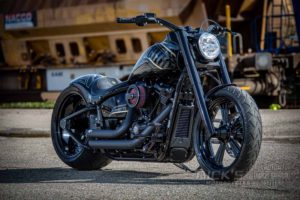 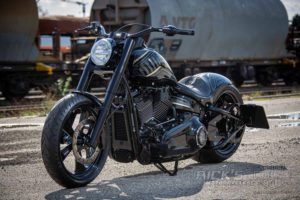 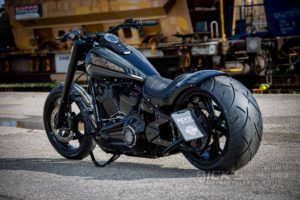 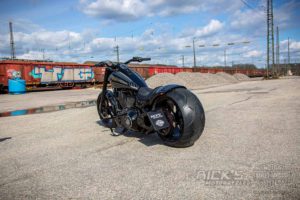 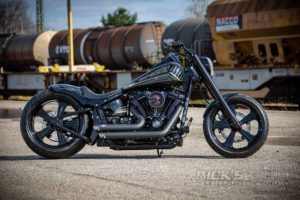 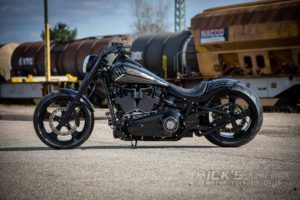 Many people associate Rick’s custom bikes with wide tires. But enough proof exists on these pages that the guys from Baden-Baden can also build pretty bikes with smaller tires. And why does Rick’s again and again build bikes with wide tires? Simply because they can, in the literal meaning of the word. The main problem with wide tires is to lead the belt past the clearly wider tire. For this purpose Rick’s has developed a swingarm kit. If you want to position an individual belt further to the left, you have to move the primary further to the outside or even locate the tire additionally further to the right. Rick’s kit, however, consists of two belts. While the first stays in the OE position, the second one is moved via an intermediate shaft to the outside. 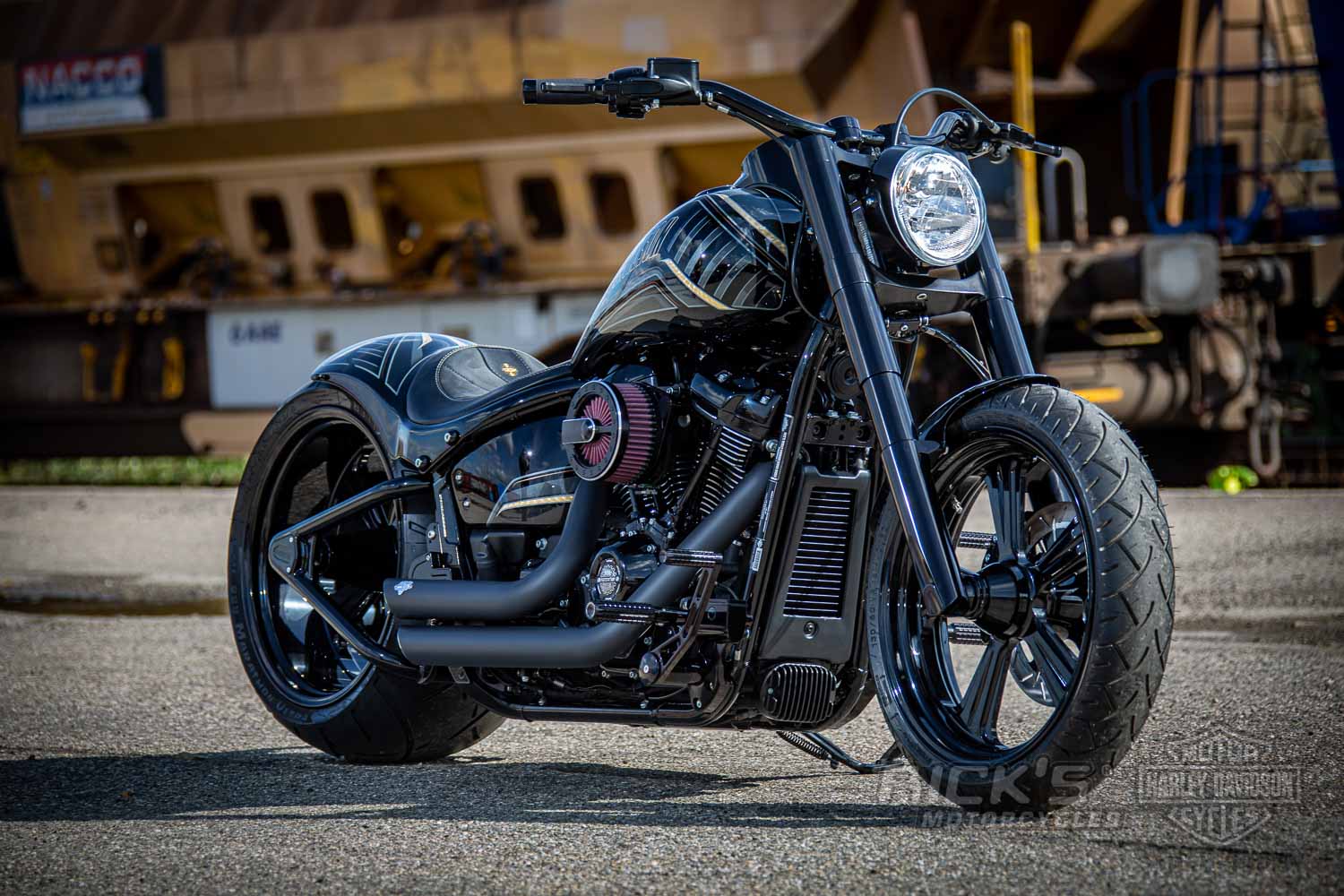 Rick’s is worldwide the only manufacturer who does wide tire conversions in this way, and the advantage is obvious. When neither tires nor the weight of the primary are being offset, the result is a perfectly balanced bike with which one can easily navigate through narrow serpentine bends. In addition, with Rick’s swingarm the brake disc can also be moved to the left side, which ensures a good look of the “pretty” side, on which Rick’s has installed the in-house made wheels. They are in Rick’s program under the name “Gimmi 5” with dimensions 4.0 x 18 and 10.5 x 18. To match those wheels, Rick’s design pulley and Rick’s brake discs were selected.

Normally the Fat Boy models are recognizable by their striking front end and the headlight mask which dominates the look with its square shape since the Milwaukee-Eight models. But on Rick’s Fat Boy nothing is left of that look. For the Twin Cam models up to 2017, Rick’s already had a fork and triple tree on offer, which largely also fit on the Softails from 2017. The triple tree for “Wotan” was, however, slightly modified. A V-Rod lamp, which can be attached with a lamp holder specially developed by Rick’s, ensures plenty of light in dark nights. 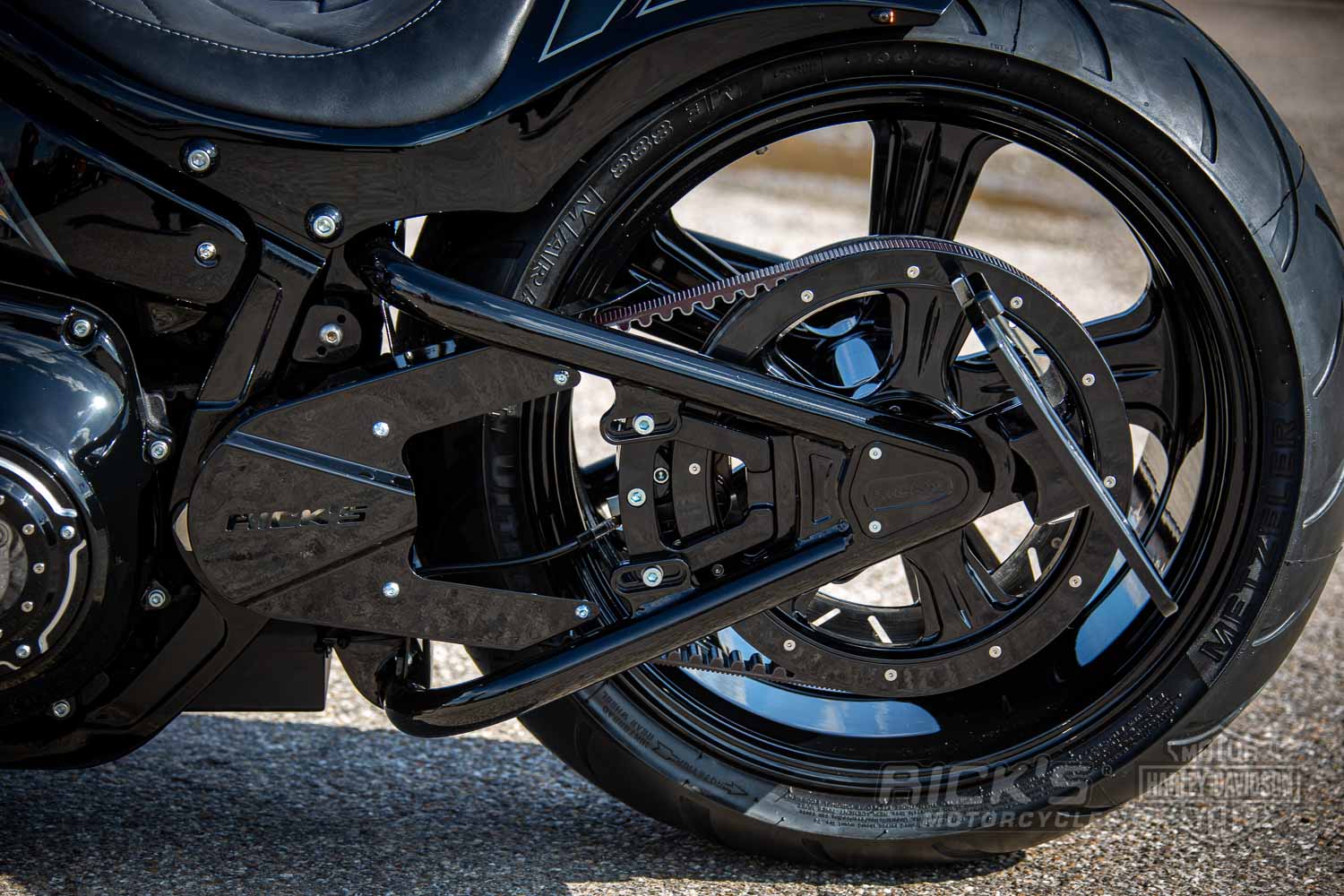 Now to the sheet metal work. Of course all metal work was done at Baden-Baden, but nevertheless, or maybe because of that, it is worth looking at it a bit closer. The Fat Boy tank was elongated and stretches now harmoniously over both cylinders. The rear fender underlines the shape, and with no struts in sight, nothing spoils the appearance. If you look closer, you will see there is a seat edging which borders the seat surface, which reinforces the impression of a flowing line. So that the transition from fender to frame doesn’t show, a cover was used that hides the whole frame tube. Rick’s makes suitable steel fenders in various dimensions for all Milwaukee-Eight Softail models. The front fender is, of course, also from Rick’s vast accessories program. 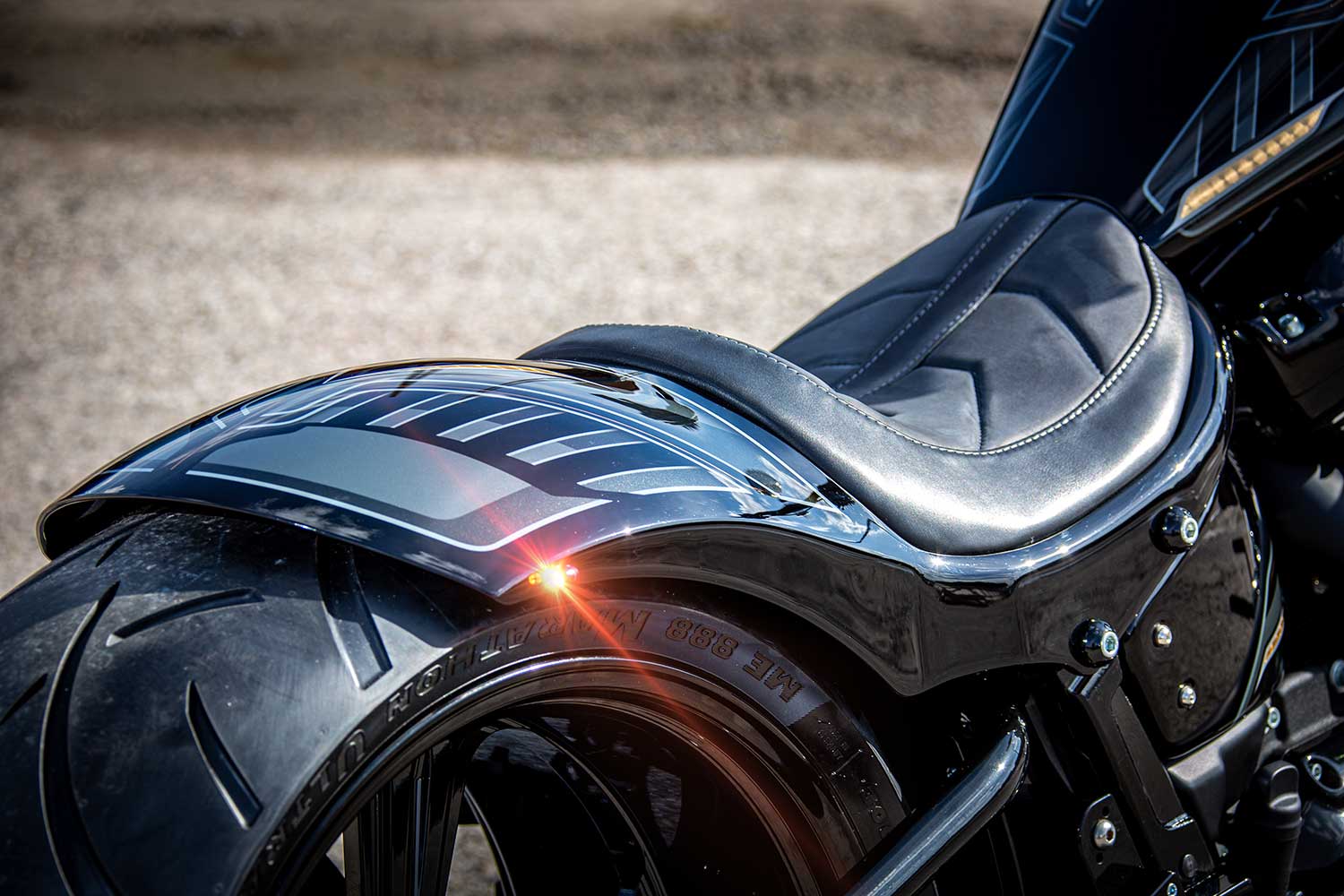 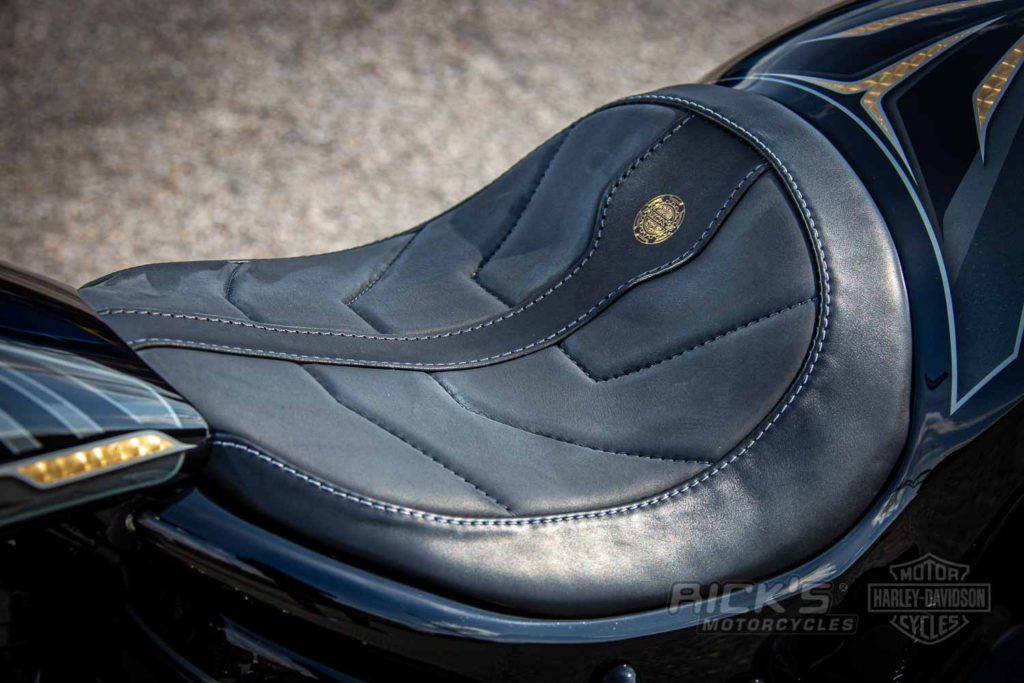 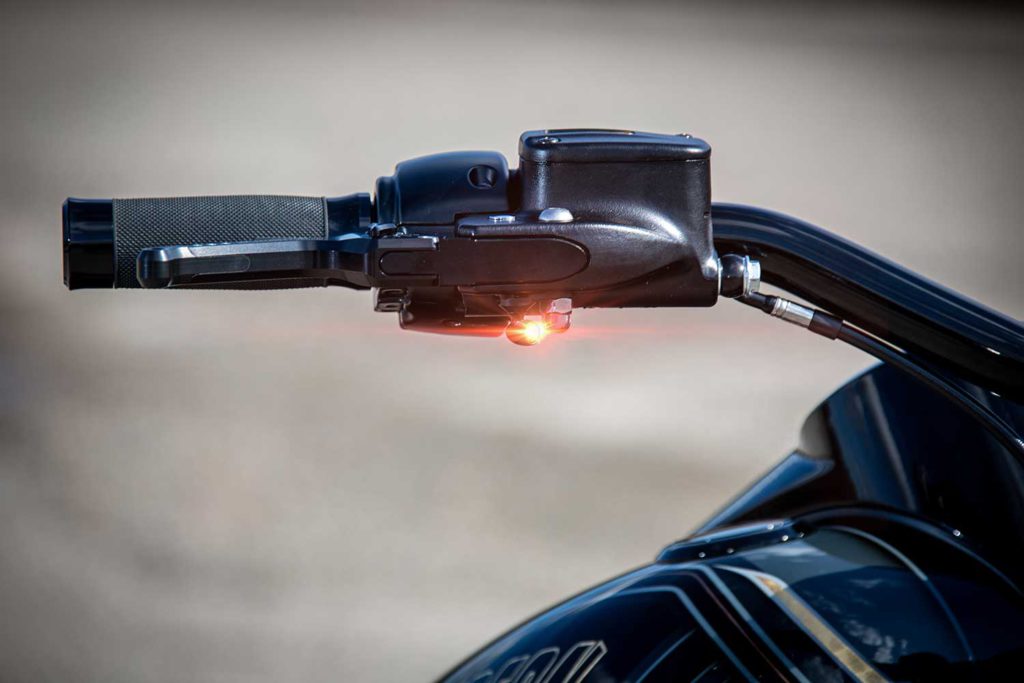 These are the main components up to here, which just leaves us to describe the smaller extras with which Rick’s Fat Boy was embellished.

The foot controls are offered by Rick’s for the Milwaukee-Eight Softail models in different versions. OE position, +2 inches and +4 inches forward, they offer the right length for every leg. The brake and clutch levers used here are available for almost all Harley-Davidson models and can be adjusted to any size of hand and are also made by Rick’s.

A free view of the interior of the clutch is possible with Rick’s derby cover. The clutch covers are similar to a ship’s round porthole windows and have a clear Makrolon window. The air filter is available from Rick’s program under the name “Bandit”, where also risers, handlebars and many more parts await you.

A further, extremely small part are the indicators, and these have in fact not been made by Rick’s, but by Kellermann, who supply this probably smallest of indicators with an ECE test mark. These, plus the 3 into 1 version with rear light, brake light and indicator at the rear, can be used legally on German roads. At the front the indicator function is sufficient, but due to their small size, it is difficult to attach them. At the rear they are simply screwed into the fender and at the front they can be fixed to the mirror screw with indicator holders that were specially created by Rick’s.

Finally a few words about the seat. This was not made by Rick’s, but by renowned seat manufacturer Spirit Leather who made the seat according to Rick’s design.

A lot more could be said about this Fat Boy, but you have two eyes and many photos to look at, don’t you?