Softail Slim…already the name hints at the slim line of the bike. Rick’s Motorcycles is known for not conforming to fashion trends, and the trend towards ever slimmer bikes would be such a fashion trend, which had to be counter-acted against, and therefore a fat 360 tire was to be put on the Slim. Rick’s swingarm offset kit would ensure that the tire was running centered. New wheel covers, in-house supplied Gimmi 5 wheels and some gimmicks, and the fat look was achieved…but as so often in life, it all turned out way more complicated than expected. 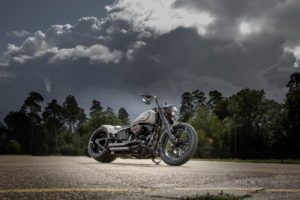 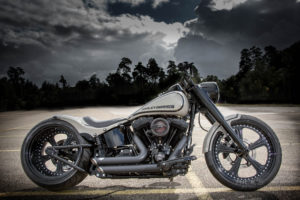 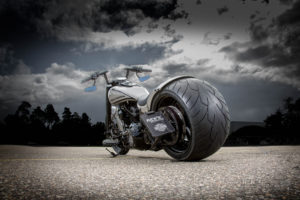 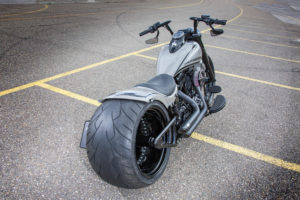 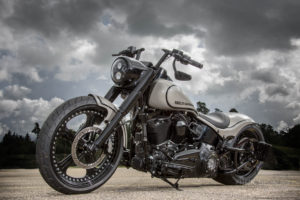 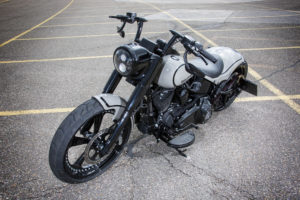 Long before Rick’s started this project, many customizers already tried to use this wide tire in a custom bike. Some did better than others, because the problem is the belt drive, which, in the stock version, leaves very little room for wider tires, and so that belt and tire have enough room, either the wheel or the drive pinion on the primary has to be offset with a longer shaft.

Rick’s also tried out many tricks, but from a certain widths onwards, these experiments don’t yield the desired results. If the tire is not positioned in the middle, then the whole geometry of the vehicle is jeopardized, which you will notice at the next tight bend. To reposition the drive pinion of the primary so far to the outside is also unsatisfactory since lever action, even with a support bearing, cannot be compensated for.

Back then, Rick’s Motorcycles reacted to requests for wider tires and developed, patented and TÜV approved a completely new swingarm kit. In short, this kit consists of a new, wider swingarm, an interim shaft and two belt drives, with which the propulsion is directed via a shorter belt to the interim shaft. A further primary is positioned towards the outside on the interim shaft, whereby power is transmitted via a further shorter belt to the rear wheel. That sounds simple, but is rather complicated. This kit was used hundreds of times at Rick’s in the last few years and supplied to customizers all over the world. Individual bikes have run over 100,000 km with it, and the system can therefore be considered tried and tested.

But for the present 360 tire conversion, the kit was once again modified. The additional primary received cut-outs, less so because of saving weight, but more to highlight the technical look, and in order to achieve a higher torsional rigidity an additional strut was inserted into the swingarm triangle. 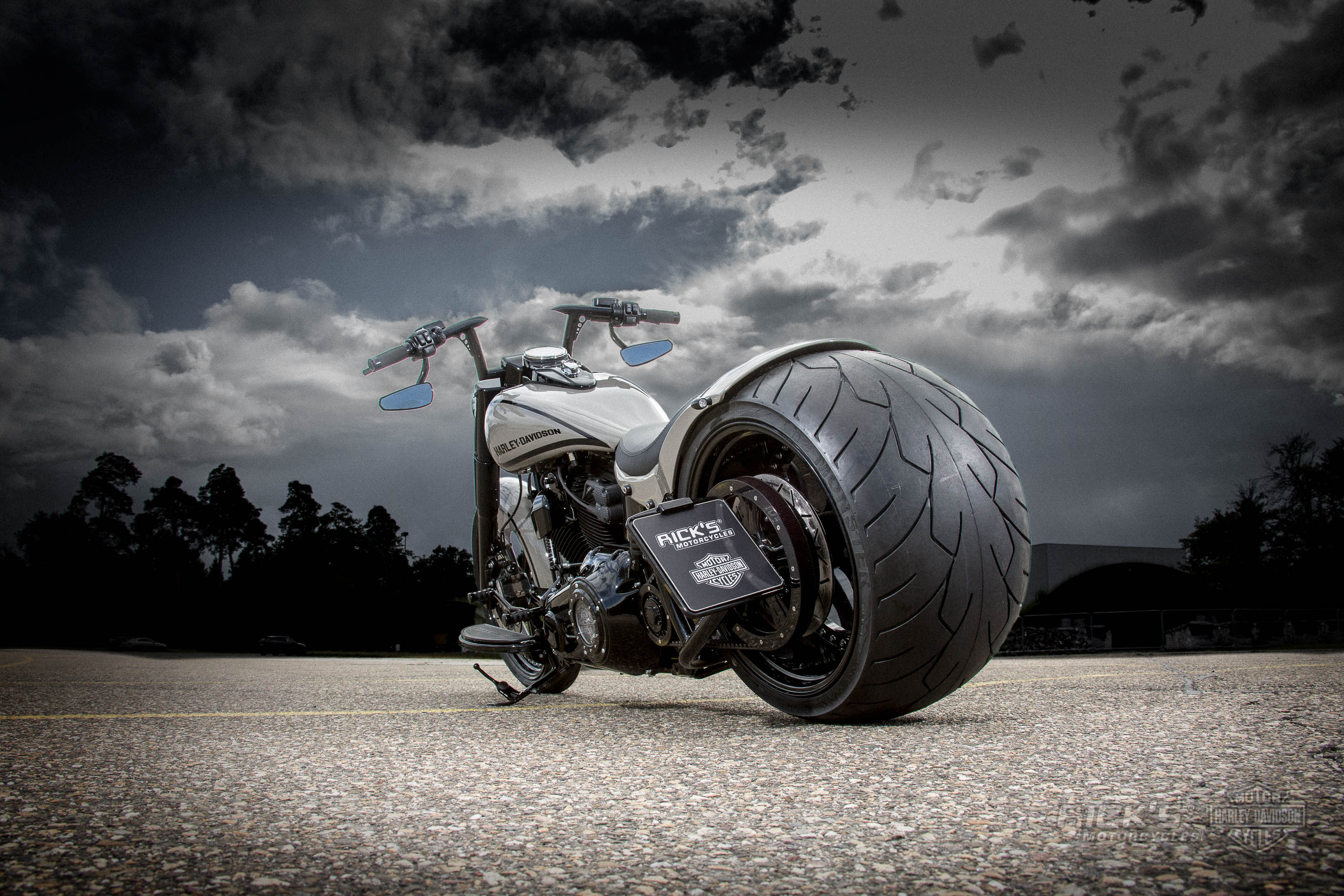 Such a project can quickly become endless, because a wide tire and a swingarm kit are not the end of it. A wider rear fender was the next thing to be made, and true to Rick’s philosophy had to be more than just a simple domed cover. At second glance one notices that the steel was adjusted exactly to the radiuses of the tire and shaped so that it leads with a shallow curve to the seat shell. In that way the pad could be kept extremely comfortable and the seat integrated into the fender. 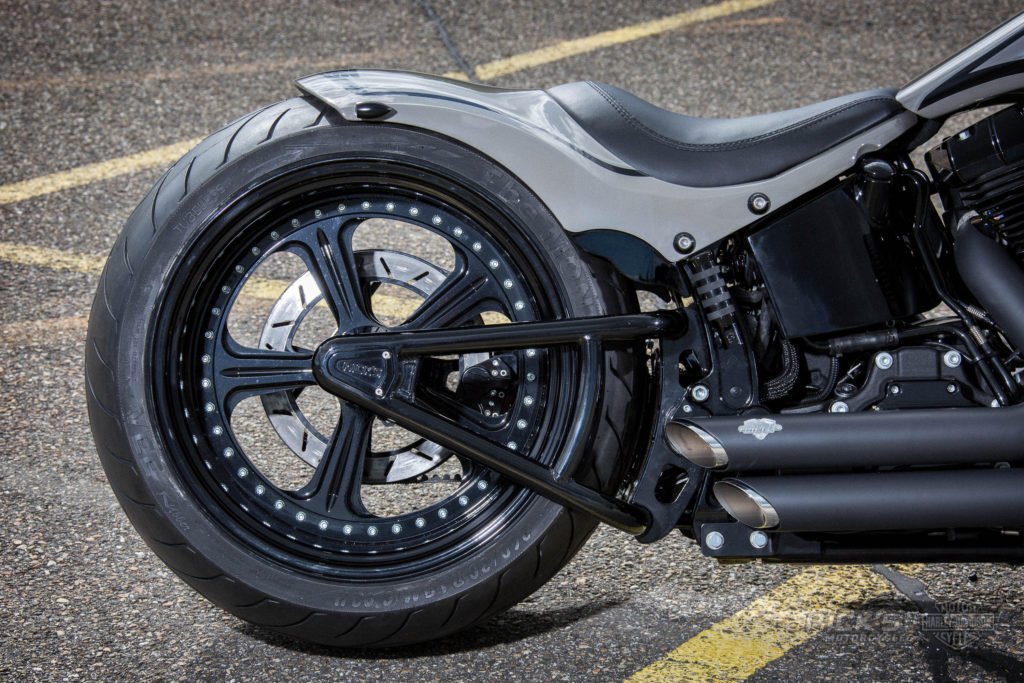 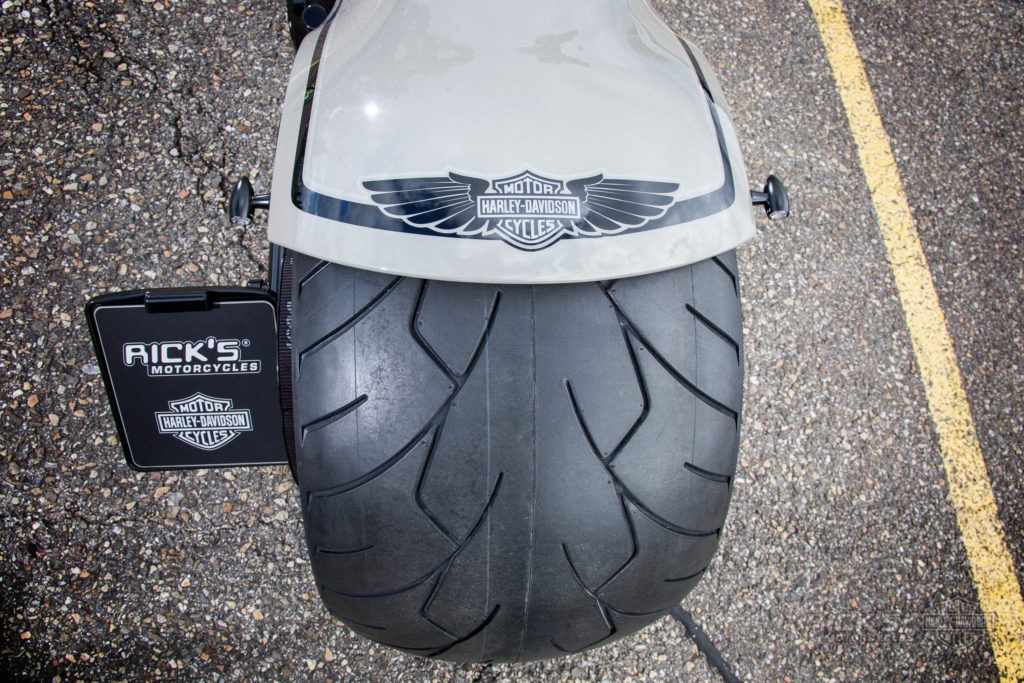 A further reason for the flowing lines of the bike is the tank…the miracle word here is stretching. For this the stock tank is being elongated so it reaches the seat, which also sounds simple, but isn’t. At Rick’s, tank elongations are formed from steel and made to fit. Since, however, a tank is domed in all directions, this is no easy task. Next to the existing domes, the bottom edge of the elongation should stretch in a soft curve over the cylinder heads, which is another challenge for every metal worker.

One could write a book about this bike alone, which would be far too long! Just check out the black coated 3-part “Gimmi 5” wheels, which were also made at Rick’s, or the medium high Ape, which the team at Rick’s made for this bike, or Rick’s foot controls, or Rick’s air filter, or Rick’s grips, or…or…or!