During the last few months, Rick’s has already converted two Harley-Davidson Lowriders into trendy Clubstyle cruisers in the style of an FXRT, FXRD or FXRP. Now, with an in-house made fairing, there is a suitable part in the range that makes it possible to interpret these bikes from the 70s even more fittingly. If these fairings remind you of police bikes from this era, then you are right, and for Rick’s retro fairing, these served as a template. 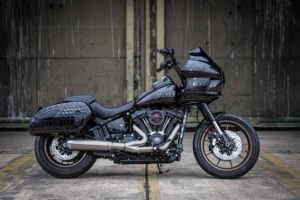 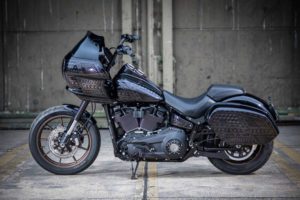 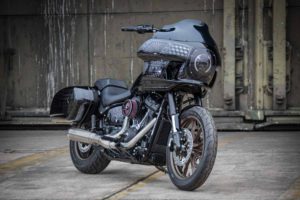 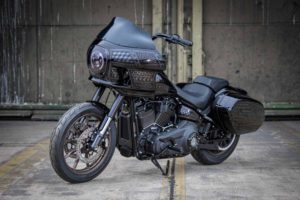 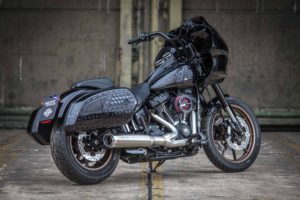 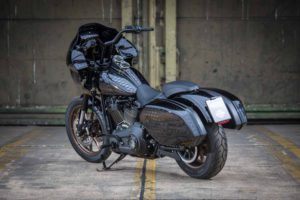 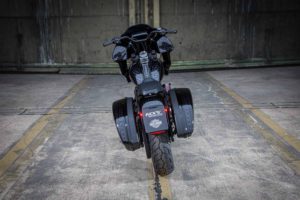 As already mentioned, the popular Clubstyle is based on bikes from the 70s. The beefy fairings are well known from American police bikes from this era. Rick’s Motorcycles has now developed a replica of these fairings which largely resembles those. Rick’s has been wanting to build a bike with a fairing in this style for a while. Problem number 1 was that originals, if you can find one, are worth their value in gold. Different companies are offering similar products, and that brings us to problem number 2, because their quality and fit have not lived up to the high expectations of Rick’s Motorcycles. That left only one possibility, and that was to make its own part to satisfy those needs. 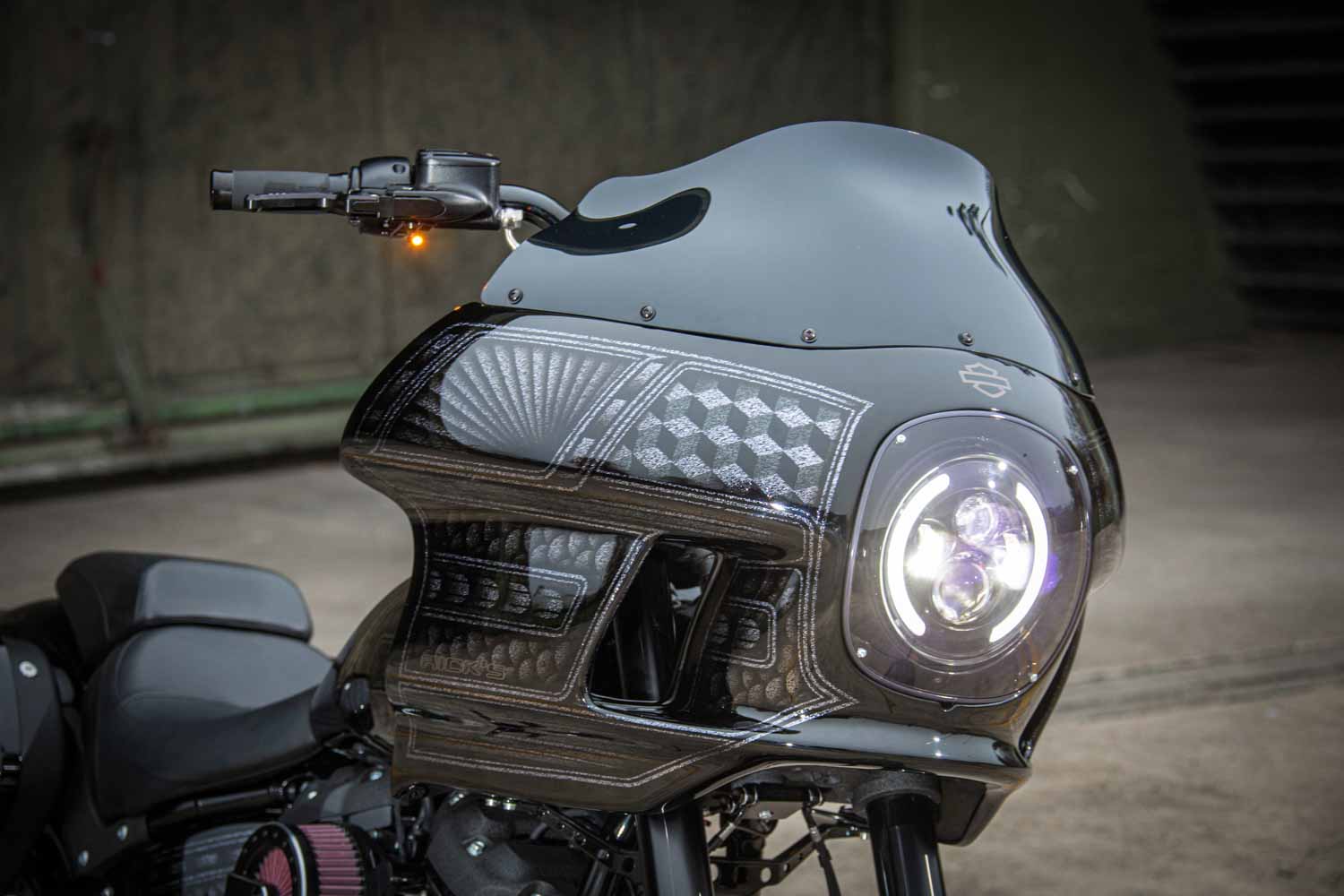 Rick’s Clubstyle fairing is made as a replica of the original police bike fairings from high-quality fiberglass with gel coating. Thanks to a modern 3-D scan, the shape could be taken from the original and adapted to fit Milwaukee-Eight Softail models from 2018. The construction of the steel holders alone will impress any technical freaks as the fairing can, as required, simply be adjusted in height. For fitting it safely to the bike, the holder is screwed onto laminated steel strips. As headlights, 7-inch versions, either from Harley-Davidson or aftermarket products, can be used. Rick’s black coated Clubstyle handlebar catches the eye, but much more interesting is the adapter with which the handlebar tubing is screwed to the triple tree. The mounting position of the handlebar can be moved 4 cm closer in the direction of the rider, which doesn’t sound much, but improves the sitting position and handling enormously.

So far, we have introduced the most striking part of the bike, but let’s not forget the many other highlights, for example the adjustable exhaust system from Dr. Jekill & Mr. Hyde. Rick’s Motorcycles is one of the first companies able to use this brand-new 2 into 1 system in a motorcycle. Including pipes and heat shields in brushed stainless steel look and the stylish end caps, it appears to be made for bikes of this style. For the side cases, the sister model of the Lowrider, the Sport Glide, was used.

Talking about the exhaust, the air filter also deserves a mention. Rick’s air filters are available in many different designs. All are flow-optimized and therefore suitable for riders who appreciate performance and looks. It goes without saying that with these new components the engine control also had to be adjusted, and Rick’s has a modern test bench on which every riding situation can be simulated and the mapping adjusted accordingly. 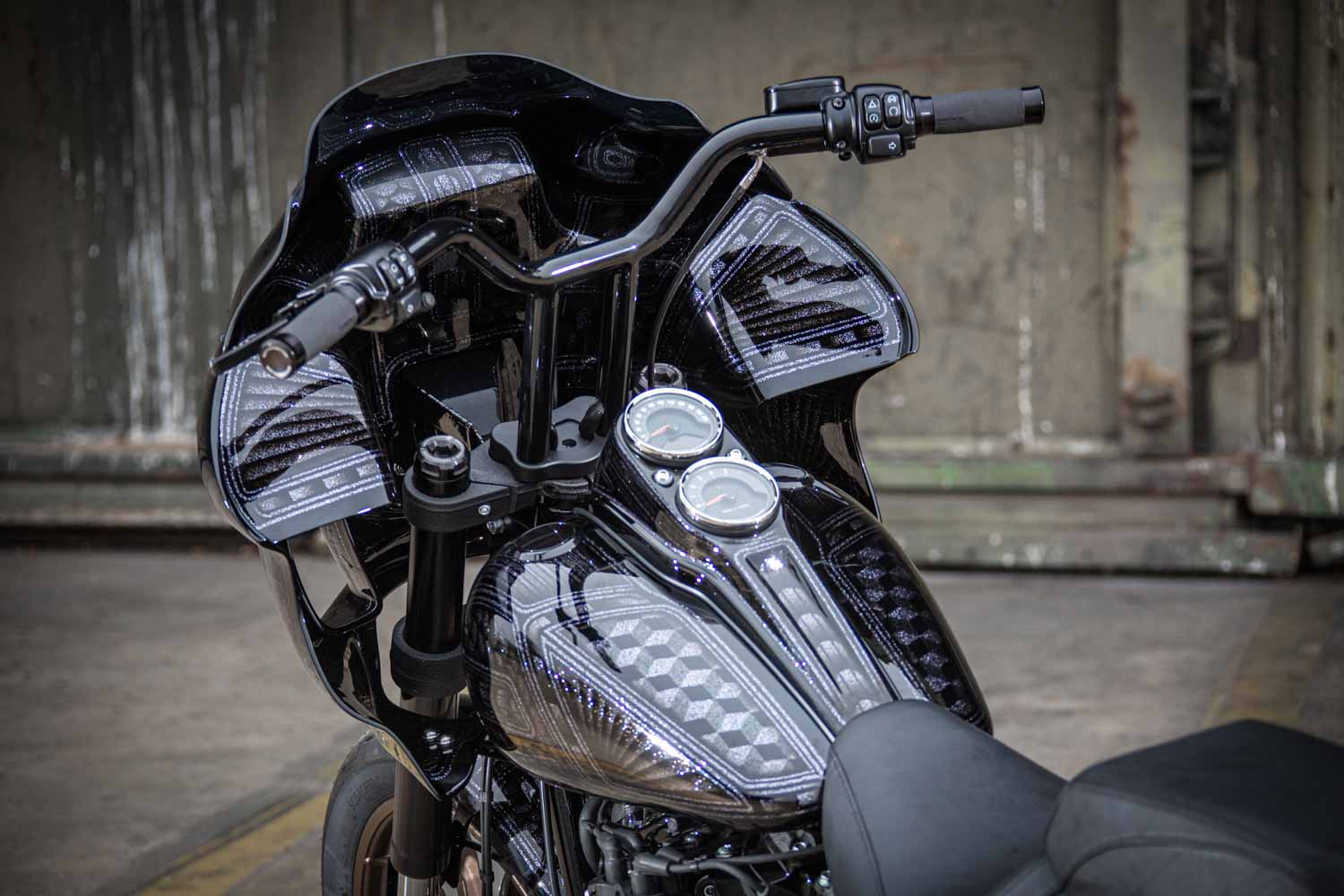 Another detail that deserves attention is the license plate holder, which was mounted centered on the fender. Rick’s plate frame is available in three different versions. A simple one which consists of the machined plate with license plate illumination, a further one has in addition to the license plate illumination integrated 3 into 1 lights, including indicator, rear and brake light. The third is the version used here, prepared for the 3 into 1 Kellermann Atto DF. On all, the license plate can be inserted from the bottom into the holder and fixed with a screwed-on cover. A suitable adapter with which the plate can be mounted onto the fender is also offered by Rick’s. 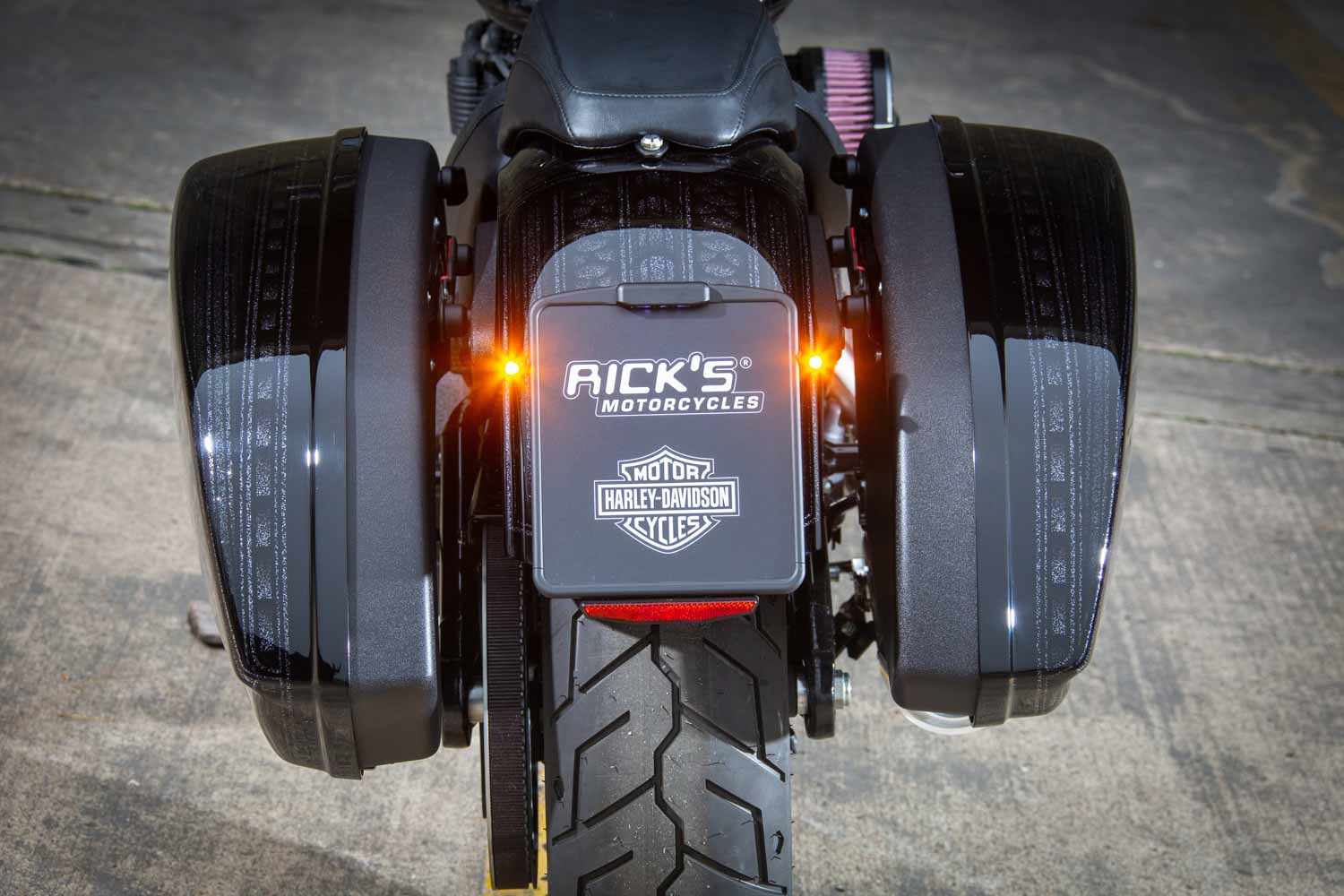 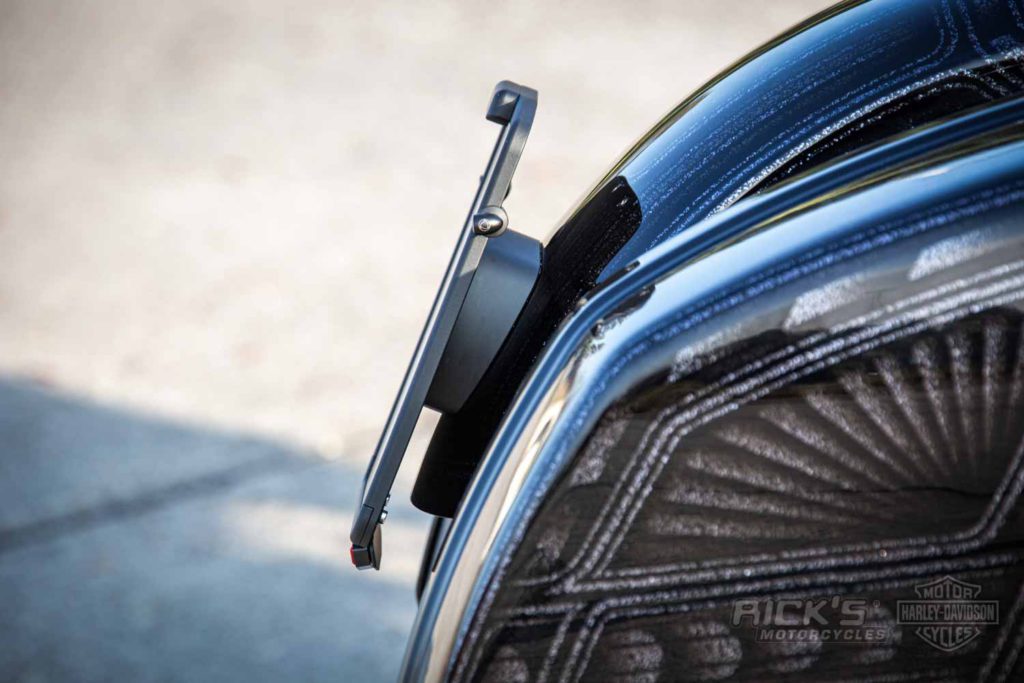 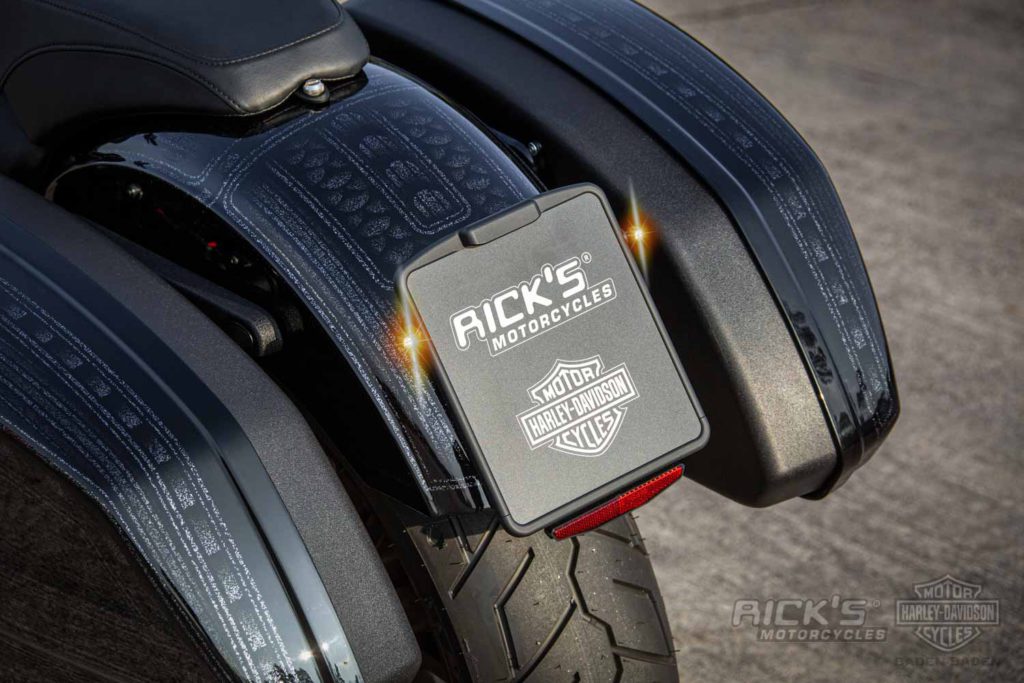 Other accessories on the bike that should be mentioned have also all been made by Rick’s, for example the belt cover, which is available in different designs and surfaces for all Milwaukee-Eight Softail models from 2018. The foot controls can be found in Rick’s parts range under the name AK 7.4. These are available for the rider with shift peg as well as passenger pegs. They fit perfectly into the stock location and can therefore be exchanged quickly and without problems. Rick’s bullseye derby cover has a clear Makrolon window and allows a view of the rotating clutch.

For those of you who like to read, we have included a story about the history of these fairings, the author of which is Horst Rösler, aka “the Motographer“.

With the present “Clubstyle” wave, another part of the Harley-Davidson history, a frame-mounted fairing, is unearthed, up to now mostly forgotten, but with a fascinating background story! When the FXRT “Sport Glide” was introduced in 1983, this bike was a Harley model where some things didn’t quite make any sense: the air intakes in the fairing were located nowhere where they made any sense – neither the rider nor the engine were anywhere near the air stream. The police model FXRP filled the void with warning lights – and the Harley advertisement for “additional air supply” was clearly wrong. Neither the cases nor the top case had any similarity with other Harley designs and offered less space than the Tour Paks of the Electra Glides. Indeed, these parts had been designed and developed for a completely different motorcycle: the still shrouded in legend “NOVA” model series.

The “NOVA” project was decided during the so-called “Pinehurst Meetings” in 1976, during which also the development of the Evolution engines was decided. For a long time, the “NOVA” project was a vague rumour until the magazine “Supercycle” in May 1985 published photos of test bikes and engine details. Only in August 2002, after two years of “probing” and one year after the introduction of the V-Rod, the magazine “American Rider” showed the V-4 Harley on its cover and uncovered in a 9-page feature a part of this history, which can now also be found on the internet. This story is not only exciting because it wasn’t made public for almost 25 years, it is told by somebody whose business cards were enclosed in the press folders of the Company in the 80s and who, at least to some extent, knows the truth: Buzz Buzzelli.

That the people involved didn’t like to talk about the “NOVA” project is maybe also due to the fact that so much work and ‘heart and soul’ was put into these bikes, not to mention money: Harley-Davison is supposed to have sunk 15 million dollars in ten years into this bike. A complete line of V-2, V-4 and V-6 motorcycles which, had they as planned been introduced in 1981, would have been technologically fully up-to-date then. How close the “NOVA” came to production is still only known to the people who were involved. The V-4 version was supposed to be introduced for model year 1982, and by around 1980 the project had produced 30 engines and 12 functioning prototypes, which already had done 100,000 test miles. Which refutes the often rumored legend that AMF invested nothing into the future of Harley-Davidson. Then in 1980 the AMF management changed and with it the direction: cuts to the NOVA budget ordered by AMF are supposed to have been reasons which triggered the buy-back of Harley-Davidson by its own managers, but this could never be cited as a reason.

Today in the Harley-Davidson Museum in Milwaukee there are several prototypes, among them a V-4 design study, which explains the original task of the jet-like air intakes: they were placed exactly where they should be, however, on the touring version of the NOVA V-4, from where they were supposed to stream into the fake tank by the engine, past the engine to a ventilator in the rear, which was supposed to “extract” the heat from the engine. Already in the 70s, Willie G. wanted to prevent the use of a water cooler in front of the engine at all costs. The FXRT fairing was tested extensively in the wind tunnel and is likely to have already been in a quite advanced state of development when the NOVA project was stopped. Millions of dollars (AMF money to be honest) had been wasted – and what was left was a fairing, saddlebags and several unused patents like the ones for “forced rear cooling”. In order not to write off his efforts completely, Willie G. used the already developed parts for a “Sport Touring” version of the FX, and the Sport Glide was born. Despite a rather moderate sales success, the FXRT stayed in the program from 1983 to 1992 – the police version with fairing or touring screen for a bit longer. While it was produced, the FXRT was never much in demand as a base for customizing projects – most of them were stripped of their touring equipment and fairings and cases were sold at swap meets. Arlen Ness once created an XLRT version “just for fun” and built an Ironhead with rubber bearing into the XLRT chassis long before Harley offered the Sportster motor with rubber bearing. Some fairings were even used for V-Rod conversions, without the owners knowing how close they were to the origins of the original fairing: the NOVA model series was developed with support from Porsche Engineering. Meanwhile the FXRT fairings, which curiously never had a nickname, are now so much in demand again that versions for the present Milwaukee-Eight models are being made again in GFRP and plastic. Today’s Harley riders don’t mind fairings and defy weather conditions in highest comfort, as long as it is “against the wind”!