With the completely new Softail series introduced in 2017, the Harley-Davidson Motor Company created some amazement…everything new, but so that it looks like it did before, which they actually achieved! For the untrained eye, it takes a second glance to see what is new on the new models. But latest at the second glance it should become clear that this is not just a simple facelift. Rick’s Motorcycles is one of the first companies to help make the “new ones” more individual. 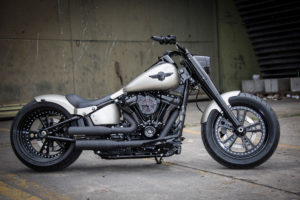 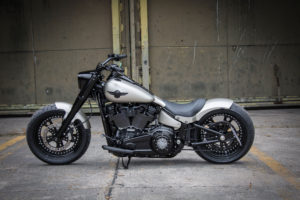 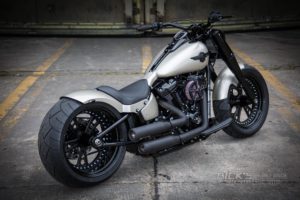 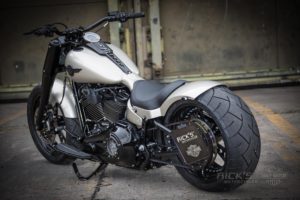 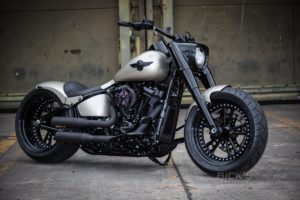 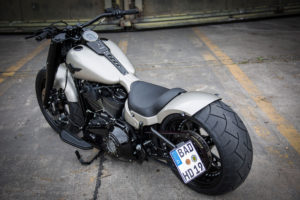 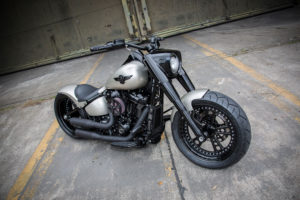 The Milwaukee-Eight has already been used in the present Touring models, but in the Softails it is used in a somewhat different version. Spectacular and new, however, is the complete frame concept. The original idea to copy the design of the old rigid frame and to dampen the rear nevertheless via a triangular swingarm and hidden strut was repeated. Only the spring went from the bottom to the top, and almost touches the seat. The former oil reservoir that used to be there is now in a sump. 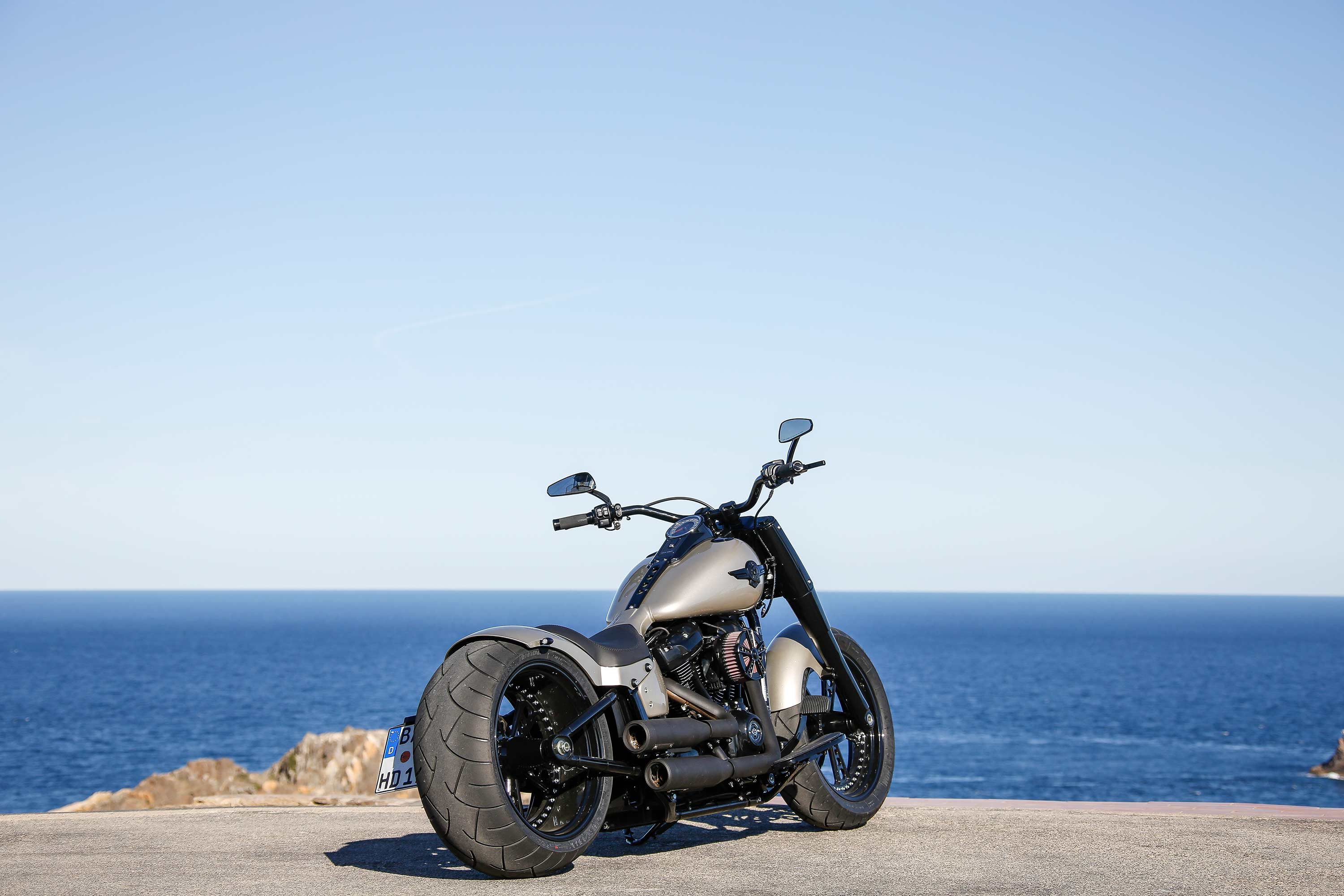 Talking about new Softails, there is, of course, also a brand-new Fat Boy from 2018, which is based on the new frame-motor concept. Especially with new models, customizers are keen to get started, and the excitement at Rick’s in the weeks before the presentation in Los Angeles was huge. Contrary to many colleagues, at Rick’s they knew immediately how to give the new ones a more individual look. A smooth steel rear fender which, thanks to the air ride system, hugs the black rubber even closer, as is the case with the front wheel. At the rear instead of the original 240 tyre is now a 260 Metzeler on a 9,0×18 inch wheel in “Rodder” design made by Rick’s, and the 5-spoke design was naturally also used at the front, with a 160 Metzeler put on a 4,5×18 inch rim from Rick’s. The clean look on the right side is due to the drive side brake, as the brake disc was simply put on the “driver’s side”. Brake disc and drive pulley were also made by Rick’s, matching the wheel design. 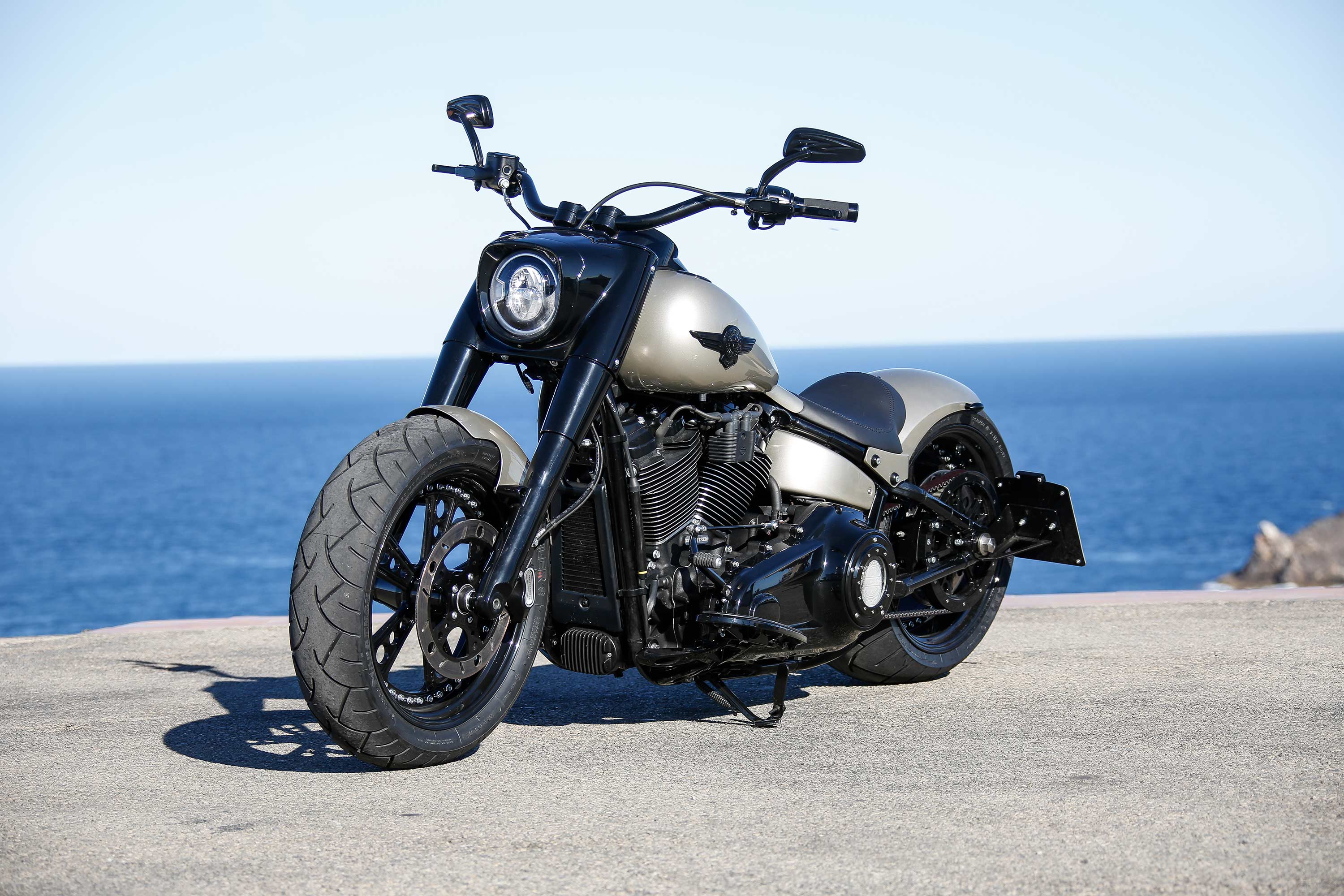 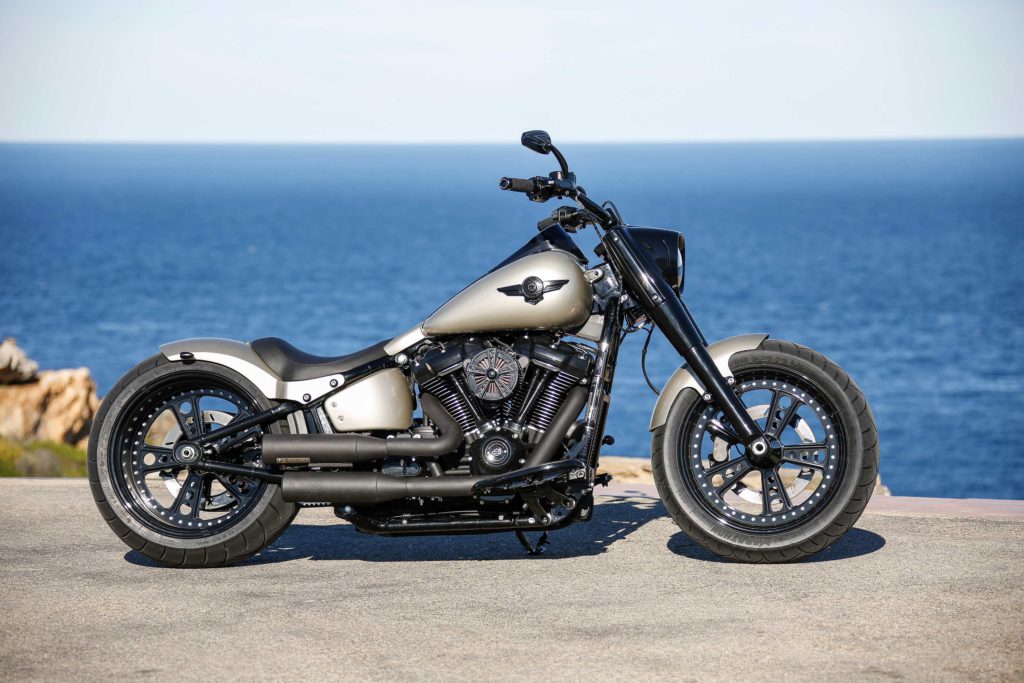 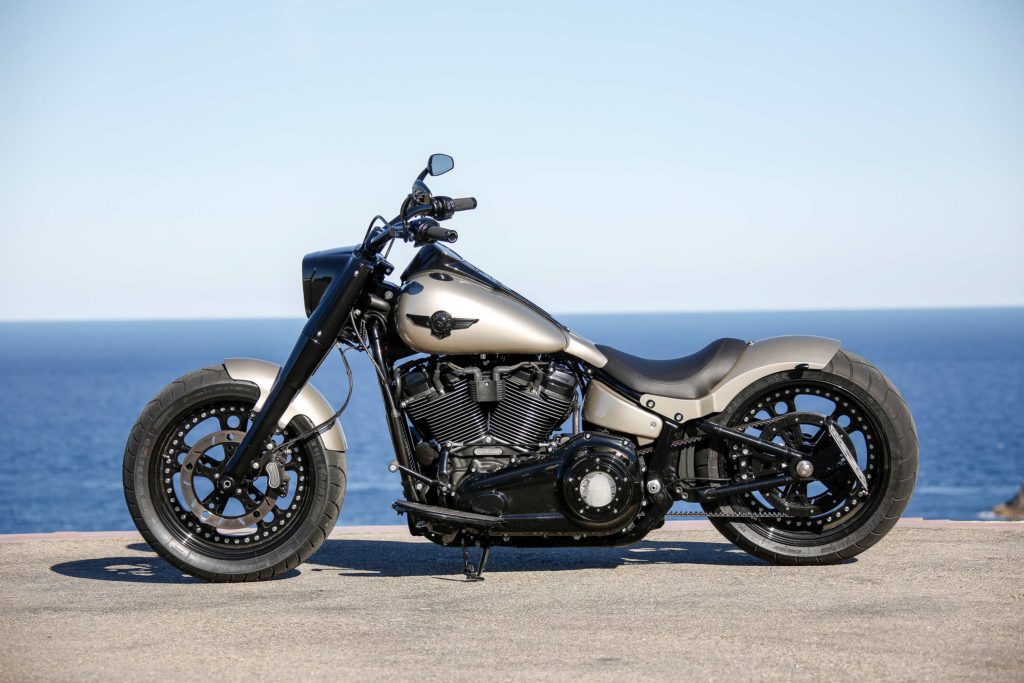 If there are no blank metallic surfaces on this Fat Boy to be found, it is because they were all coated black. The dark looks in combination with the paint in Silver Fortune are very appealing and go with the black Rick’s “Rodder” design air filter and the brake and clutch levers.

A highlight is also the exhaust system, and not only customizers stand in front of a brand-new bike, but also the exhaust manufacturers. On this bike an electronically adjustable KessTech system was installed, which is not on sale yet. KessTech gave the customizer a pre-series model, adapted for the new Milwaukee-Eight, for the Fat Boy project, which is now being tested extensively at Rick’s. The version which will be available for sale later though will look differently from the version used here. Technically, however, the electronically adjustable KessTech system is ready and already fulfils all requirements at Rick’s.

Even if it’s not noticeable, the guys from Baden-Baden have strenuous weeks and much overtime behind them. It wasn’t about being the first with custom parts for the new Softails, but more to stay true to their own philosophy to only deliver work that is 100%. To build a single fender is certainly no challenge for a metal worker, but to design it with their own welding blueprint and template to be able to make it also in small series production and that every single one is perfect, that is a different ballgame. But the job is done now, and we can rest assured that many new things will come from Baden-Baden in the not too distant future.