When the new Milwaukee-Eight Softails were presented, they

were well received among the friends of American bikes. However, parts manufacturers and customizers faced an unknown challenge. Everything is different, and no part of the range for the 2017 Twin Cam models fits onto the new 2018 models. At Rick’s they accepted this challenge, and within a short period of time, a large part of the sought-after parts from Rick’s was newly developed, among them Rick’s Fat Ass kit for wide tire conversions, which was used on this Milwaukee-Eight Softail Slim for the first time.

For the EVO models, but also for the Twin Cam Softails, the patented swingarm kit was produced several thousand times and mounted on bikes around the globe, and there was no question that this system was also to be offered for the new Softails. However, this is a completely new part now, as no single part could be used from the existing kit. Only the idea is the same, i.e. to carry the drive belt via a second belt and an interim shaft past the wheel. 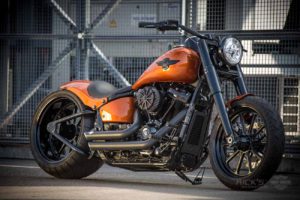 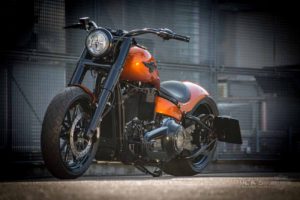 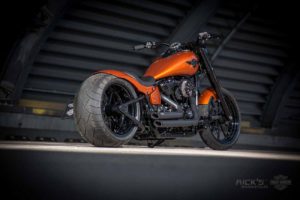 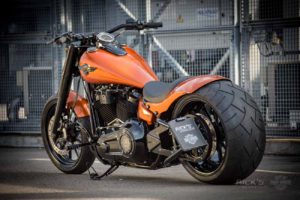 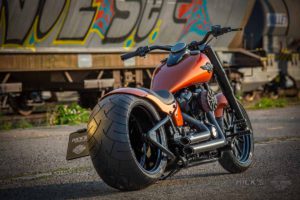 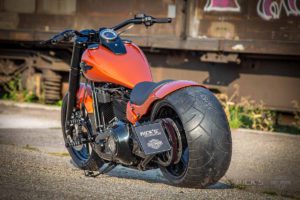 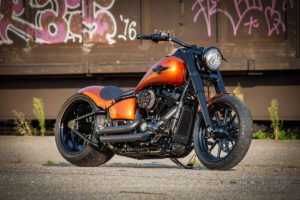 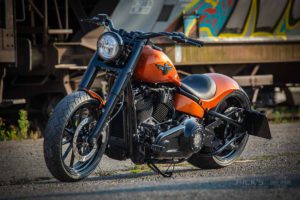 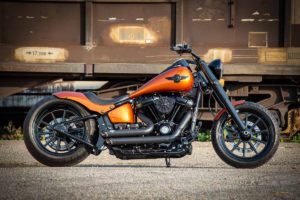 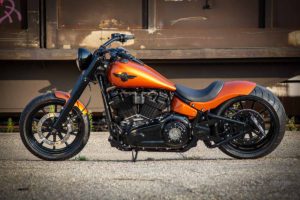 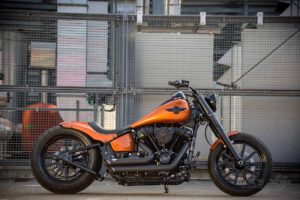 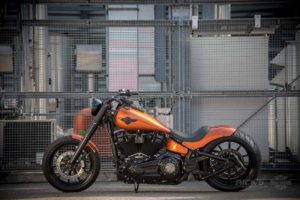 But one thing after the other, because if you want to understand why at Rick’s they make such an effort, you should understand more about the problems of wide tire conversions.

If you want to ride with a wide tire, you quickly reach the narrow limits set by the bike manufacturer, and depending on the model, a 240 tire is, due to the swingarm width, often the limit. And even if the swingarm was wider, with increasing tire width it’s not possible to lead the drive belt past the wheel.

Many customizers the world over face this problem, and just as many solutions have been tried during the last few years, but only a small amount was satisfactory as drive shafts were repositioned, wheels relocated to the right and much more. But Rick’s Motorcycles is known for the perfection of their parts and tackled the problem in a different way.

The task at hand was clearly defined. The Softail look, with its triangular swingarm, which gives the frame a resemblance of an old rigid frame, was to be kept at all cost. The tire was to run centric in the middle, and the kit should be easy to mount and without any frame modifications and additional welding work. And last but not least, the TÜV testers needed to be kept happy to approve it.

That this was possible had already been proven with the versions for Twin Cam and EVO models. The trick behind it sounds simple, is, however, in technical terms a lot more difficult. Instead of a single drive belt, at Rick’s they use two shorter ones and the power is then sent to an interim shaft. The shorter belt can now be positioned to the outside, to send the power past the wheel to the drive pulley. With this trick, wide tires up to 360 can be mounted without any problems.

Since on the Milwaukee-Eight models all mounting and pivot points are new, and the frame is a completely new construction, the tried and tested idea had to be revisited again. It took the engineers at Rick’s, in cooperation with the TÜV, one year to be able to present the new product that could be made in series. The first 300 conversion was presented at the European Bike Week 2018, and without doubt the converted Softail Slim was the highlight at Rick’s Motorcycles’ stand there and created a lot of interest with the visitors. 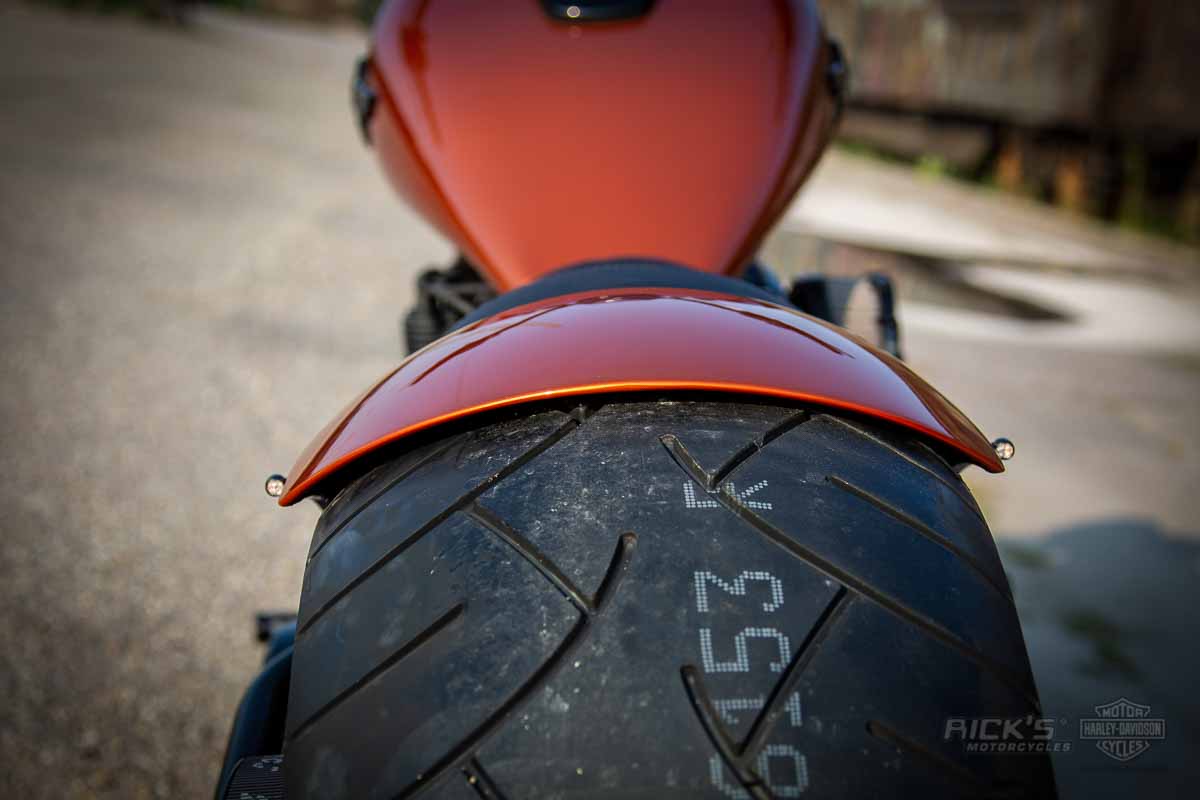 The stock fender is not big enough to cover the XXL dimension, so a steel rear fender had to be developed, which solves this problem. Rick’s steel fenders are available for all new Softail models in various dimensions.

The stretched look of the finished custom bike is due to the shape of the stock tank, which was elongated by Rick’s. Tank adjustments of this kind are daily routine in Baden-Baden, and the aim is that the tank afterwards matches the lines of the bike and stretches in a soft curve over the cylinder heads.

Another steel part deserves a closer look…the front fender. At Rick’s they have two versions in the program, a short version as well as a standard length, and for every Softail model from 2018 such a suitable cover was developed. 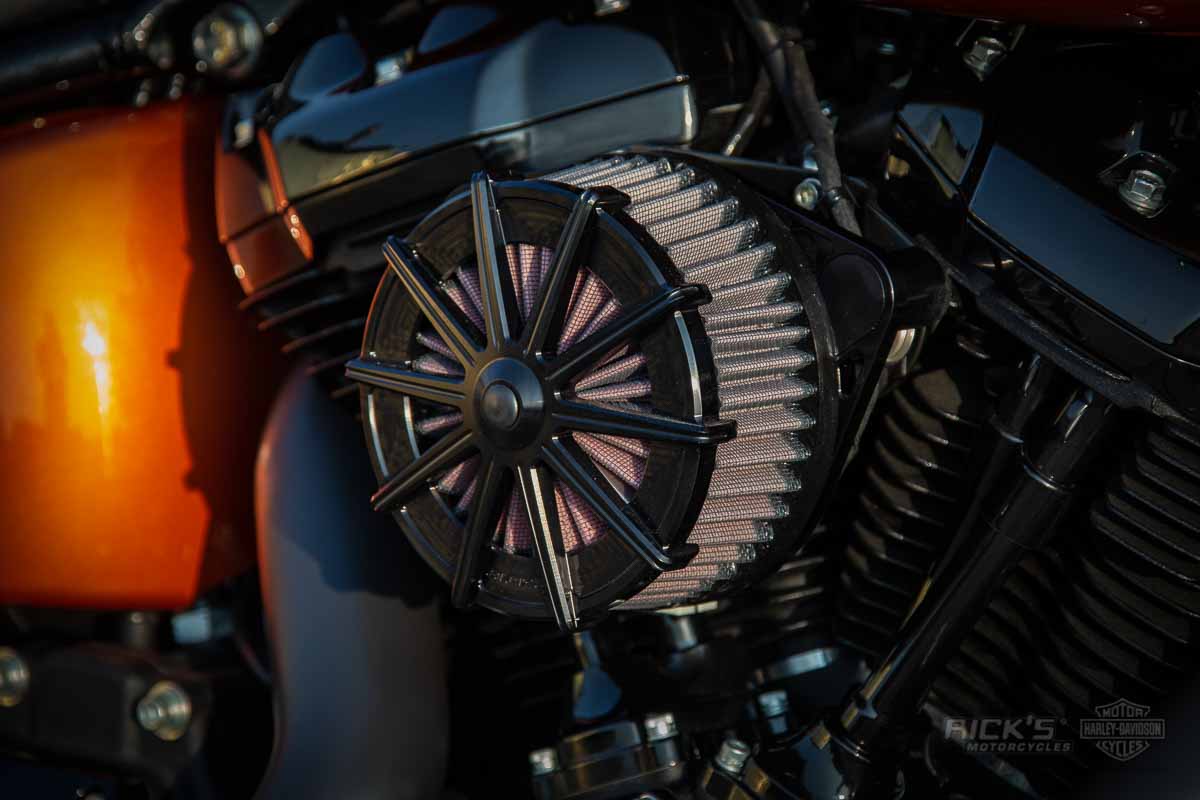 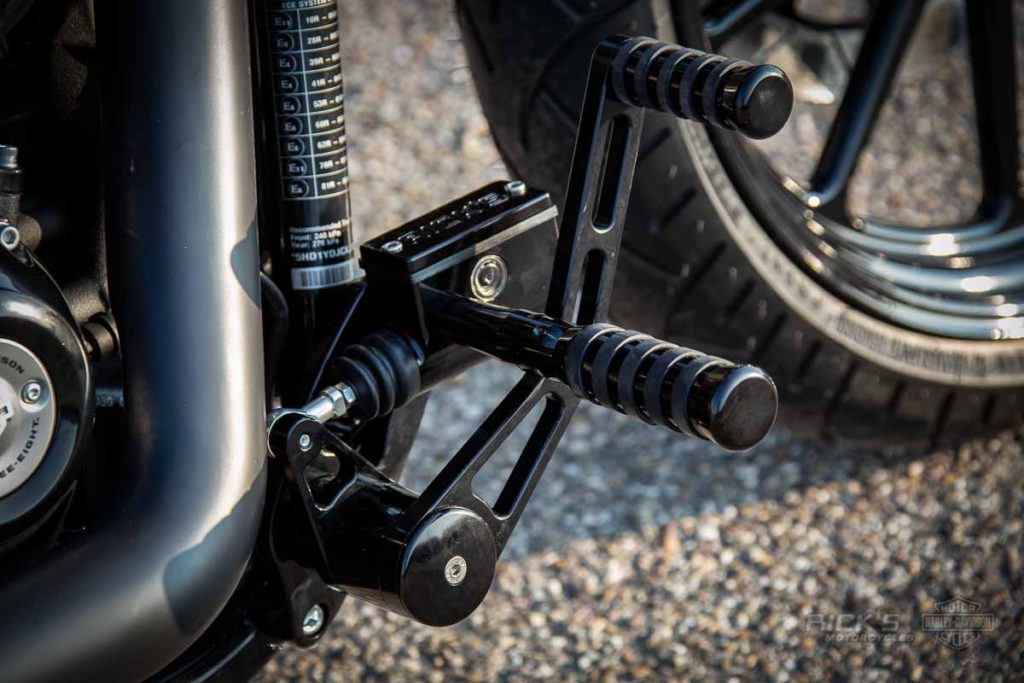 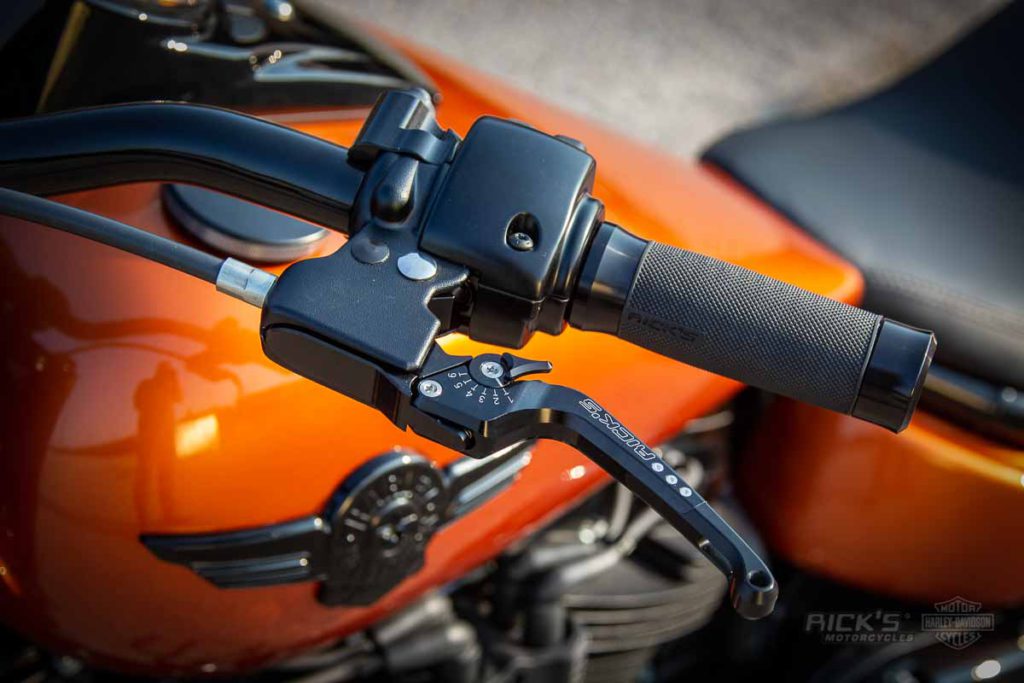 Let’s now talk about the accessories, the screwed-on parts, which have been used on numerous of Rick’s customs.

First of all there are the foot controls, which are also new creations for these models from 2018, and Rick’s now offers the complete system in three different versions. The first version has the OE position; the one used here places the feet two inches forward. For all who have even longer legs, there is a 4” version.

No matter if large or small, long or short, with Rick’s adjustable brake and clutch levers you are on the safe side. Depending on the size of the hand or the thickness of the gloves worn, the levers can easily be adjusted within seconds, and the rubber grips from Rick’s ensure a perfect grip when accelerating.

The air filter is also worth a look. On this bike the “Spoke” design from Rick’s was used. All Rick’s design filters are already available for the Milwaukee Softails from model year 2018, and of course with TÜV, and also in connection with the adjustable exhaust systems from Dr. Jekill & Mr. Hyde.

A lot more could be said about the first Milwaukee-Eight Softail with a 300 tire, like the clutch cover, which thanks to acrylic glass gives a clear view of the clutch inner. The risers and the handlebar are all made in Baden-Baden, only the indicators are not made by Rick’s, but a Kellermann product. The Atto 3 into 1 at the rear fender combines rear light, brake light and indicator in one housing and has the necessary E-approval stamp for registering the bike in Germany and the EU. Finally we would like to make the following conclusion about this Fat Ass Softail.

The developers in Baden-Baden have achieved to construct a wide tire kit for Softail models that should even make the strongest critics of wide tire conversions happy. Thanks to Rick’s patented system, the wheel actually runs in the centre. Why this is so important is noticeable in the first sharp bend, as the whole bike can easily be steered into the bend and out again. And thanks to an installed Airride system, the height of the bike can seamlessly be adjusted at the push a button and therefore to the needs of the rider and riding situation. We are certain that Rick’s Fat Ass kit for the Softail models from year 2018 will be as popular as the previous kits. Optically, wide tires will also in future remain a matter of taste, but technically speaking, there is no longer an argument that rules XXL tires out.

Photo assistance: Volker Wolf with the help of harleysite.de