The Harley-Davidson Fat Bob models are a favourite at Rick’s when it comes to selecting a basis for another customizing project. There is by now a comprehensive parts program that was developed in Baden-Baden for all Softail models which are fired up by Milwaukee-Eight motors. Part of this is, in addition to fender kits, the swingarm kit with which tire widths of up to 300 can be used. 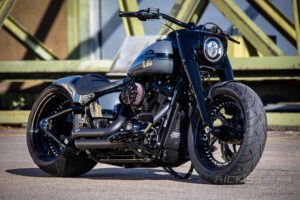 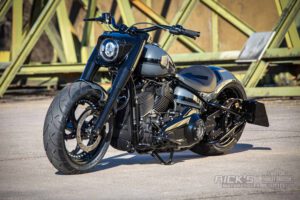 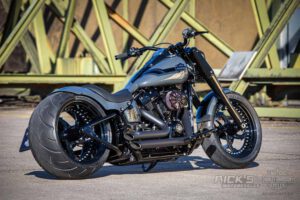 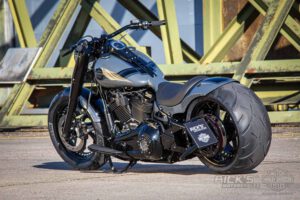 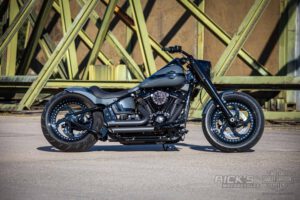 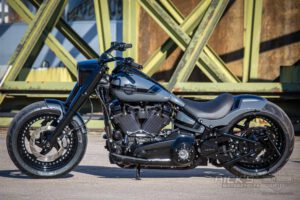 Almost all the parts on this bike have, of course, been made by Rick’s Motorcycles, but nevertheless we would like to mention them. The most striking should be the huge Metzeler rear tire, which, with a dimension of 300/35-18 inches, naturally does not fit into the stock swingarm. In order to make it fit, a somewhat larger trick needs to be performed. For this purpose, Rick’s makes its own swingarm kit, which deserves to be looked at a bit closer.

With Rick’s swingarm, the belt drive is located to the outside, which enables the tire to be placed centrally in the bike. In order to transfer the power from the gearbox exit shaft to the rear wheel, the offset has to be bridged. On Rick’s shaft the power is transmitted via a short belt to an intermediate shaft, positioned to the outside accordingly, and on to another belt which carries it to the rear wheel pulley. The result is amazing and absolutely rideable, and especially because the rear wheel does not need an offset, the bike is very capable in bends. 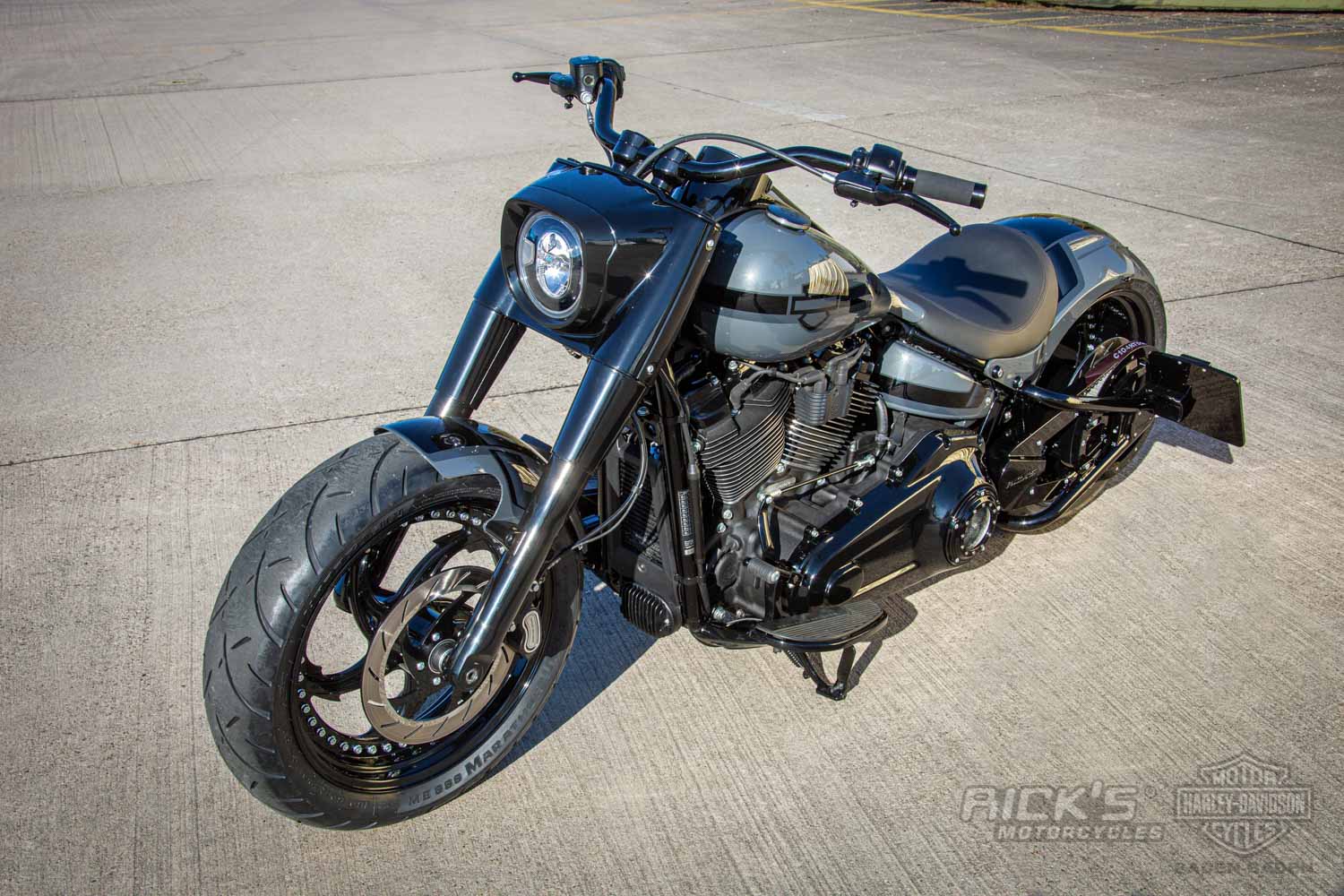 The rear brake was relocated to the gearbox side, which enables an unobstructed view onto the rear wheel. The wheels on this Fat Boy are also from Rick’s and the design of the 3-part screwed together eye-catchers is called ‘Rival’ and has at the front a dimension of 4,5 x 18 inches, for the rear wheel 10,5 x 18 inches were chosen. 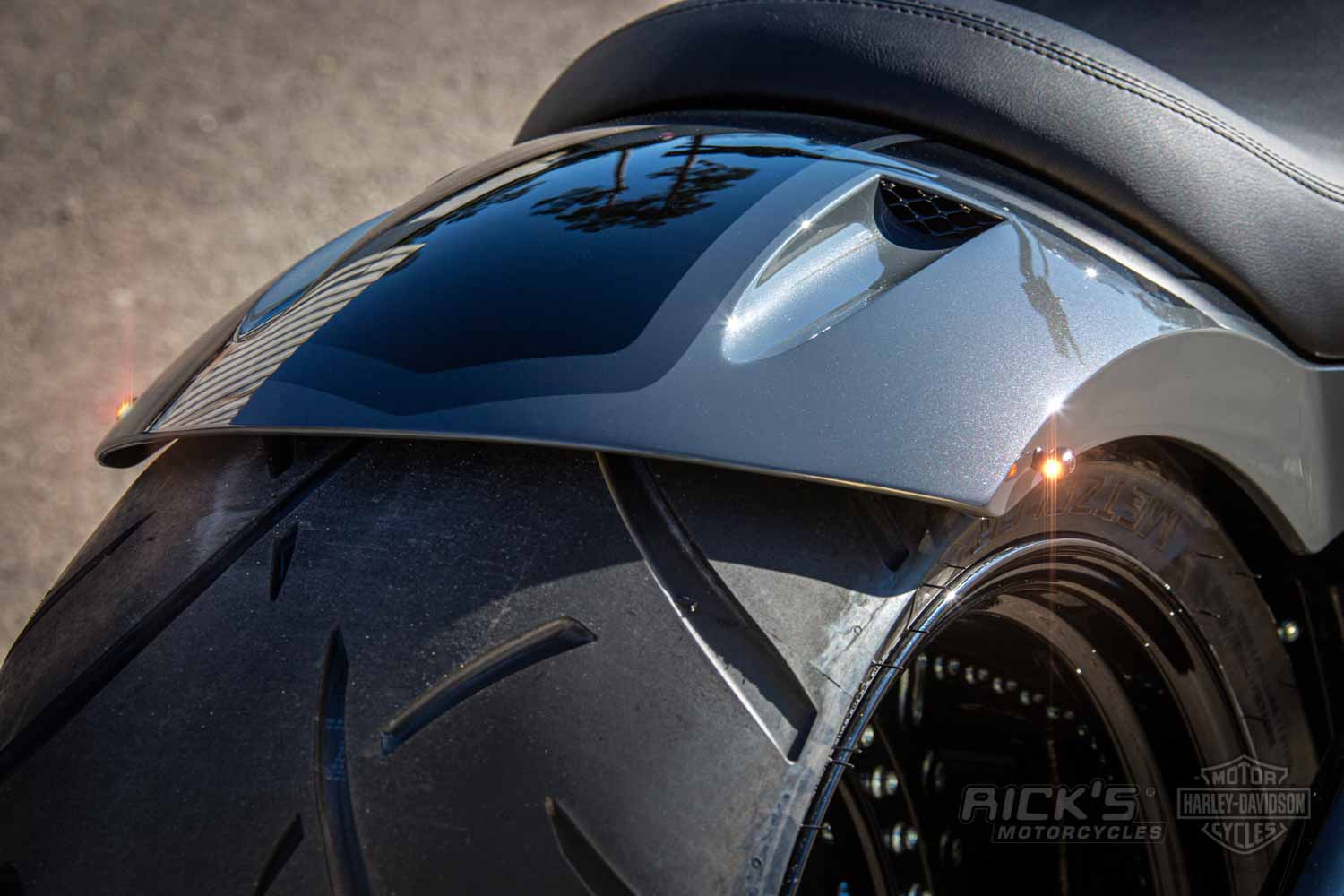 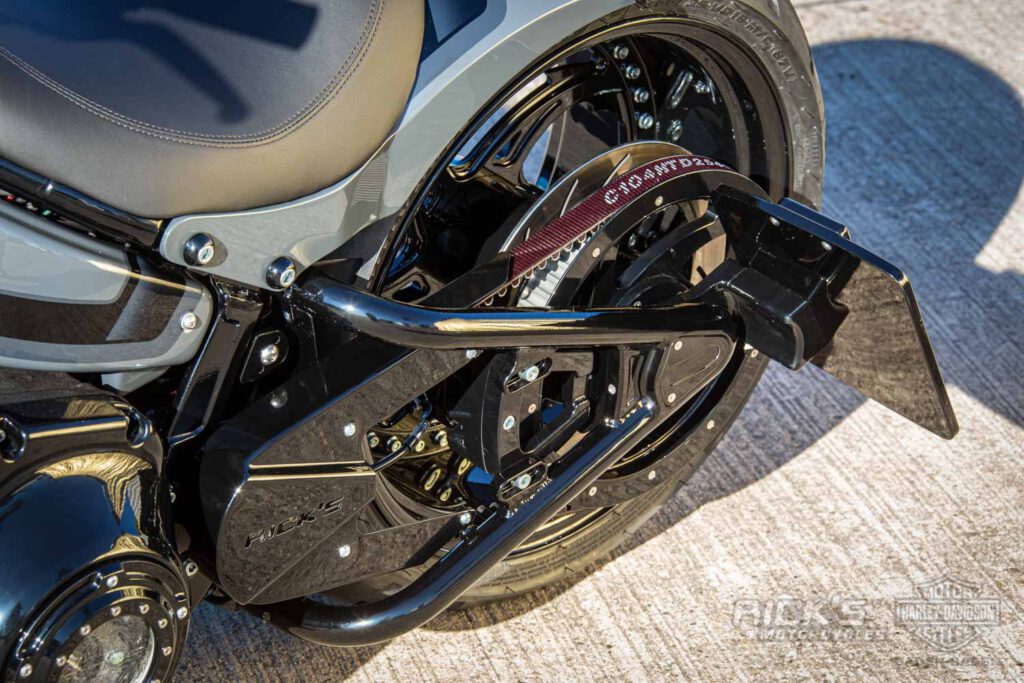 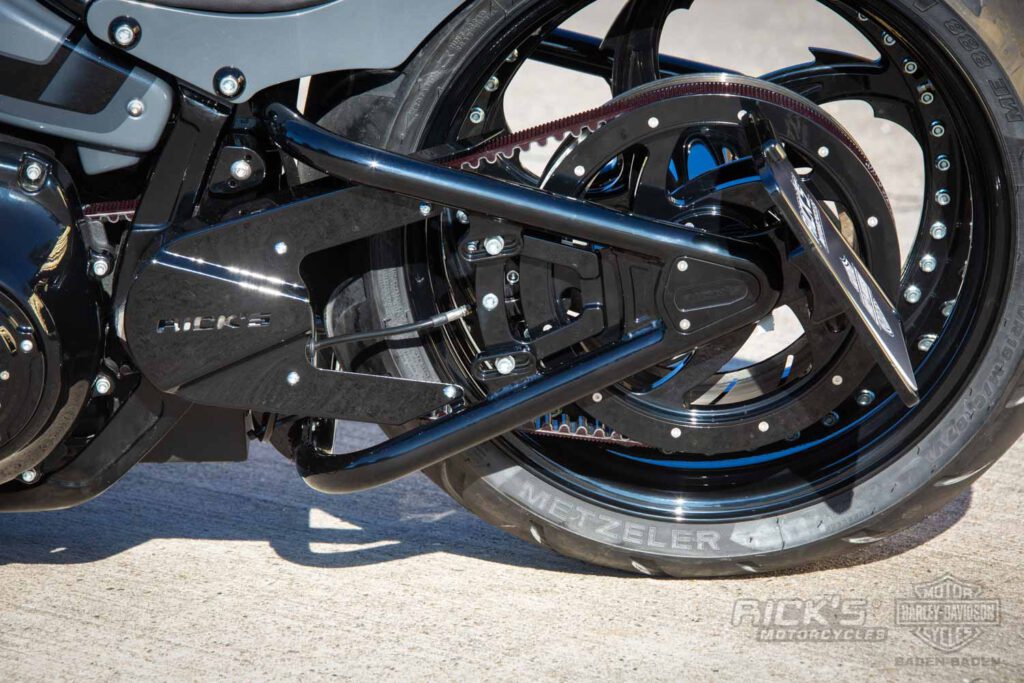 A smallish wheel cover had to be added, and the manufacturer of the fenders should be obvious. The rear fender is available as a kit and includes mounting material, seat base plate and tank cover. Special on this version are the air intakes, which give this version the additional name of “Race”. The front fender is made by Rick’s from the finest steel in two different lengths.

Let’s now look at the accessories on this bike, most of which are made by Rick’s Motorcycles, starting with the air filter with the name “Spoke”. Rick’s has a further seven designs in its program which are available for different models and model years. Handlebar and grips are also Made by Rick’s, as well as the risers into which the handlebar is secured.
If you are searching for the indicators and the rear lights, have a closer look. At the rear, Kellermann Atto 3 in 1 indicators were screwed directly into the fender struts. Indicator, rear and brake light are in a housing with a mere 10 mm diameter. The small lights come with an E-test certificate and can be used legally on the road. The Attos at the front are fixed with Rick’s holders below the dashboard to the mirror screw. A last small detail is the derby cover from Rick’s, which has a transparent Makrolon window that allows a clear view onto the rotating clutch parts.