The Harley-Davidson Softail Slim models are distinguished by their slim line. But that is no reason for Rick’s Motorcycles to build a bike that is anything else but small. The result is nevertheless a bike with clean lines and a classic design, which is impressively being proven with these photos. However, you simply have to believe us that the bike, despite a 300 size tire, is very rideable and can tackle very tight bends without problems. 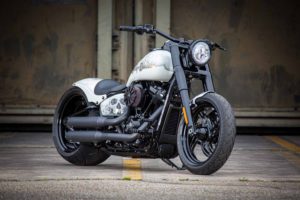 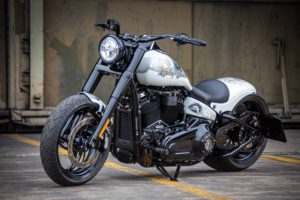 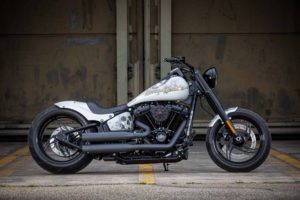 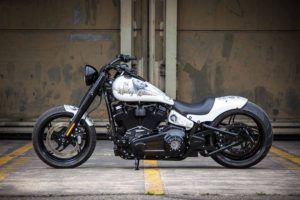 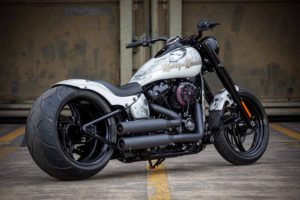 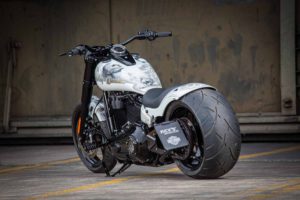 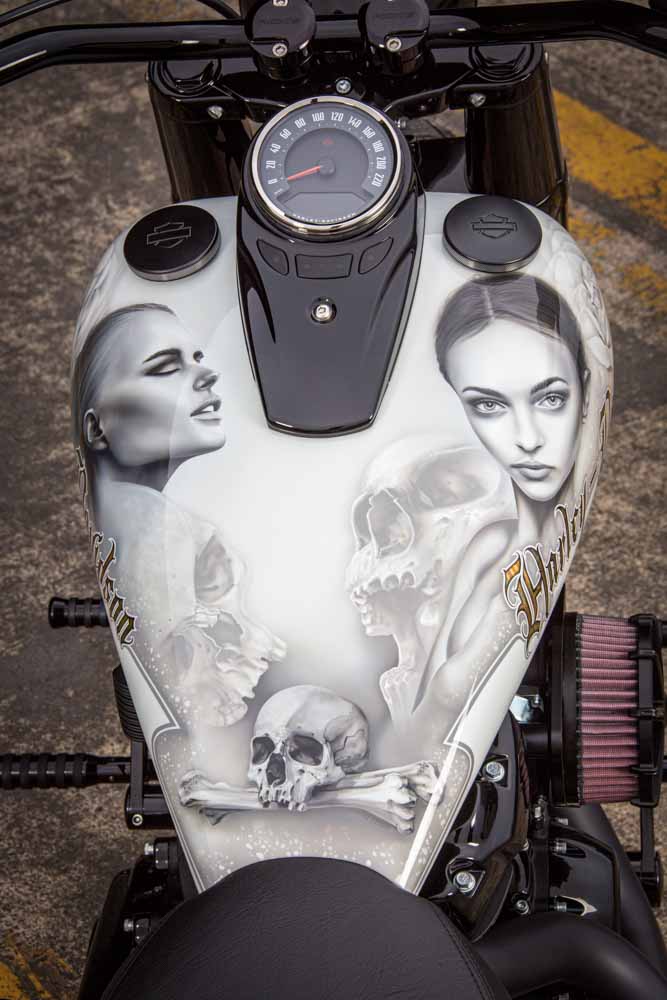 Rick’s Motorcycles has made a big effort with this bike. Many Twin Cam Softails have been equipped at Baden-Baden with tires of this dimension before and they therefore have enough experience with these things. The biggest problem with wide tire conversions is to lead the belt past a wider tire, and often the complete wheel was located further to the right. That worked somehow, but offsetting the track of the rear wheel had a negative effect on riding performance and even simple bends became a challenge with an uncertain ending.

Instead Rick’s Motorcycles uses an in-house made swingarm which carries the wider tire centered in the track.  For this the belt is divided in two parts and offset to the outside with an interim shaft. In theory this sounds a simple task, but if you consider the power of the high displacement US twins, you will understand what a masterpiece the development department at Rick’s has achieved here. The wide tire swingarm for Twin Cam models has already become extremely successful and has been used countless times. For the Milwaukee-Eight models, however, everything had to be constructed new but has now also been used numerous times, and it is expected that it will be just as successful as its predecessor. 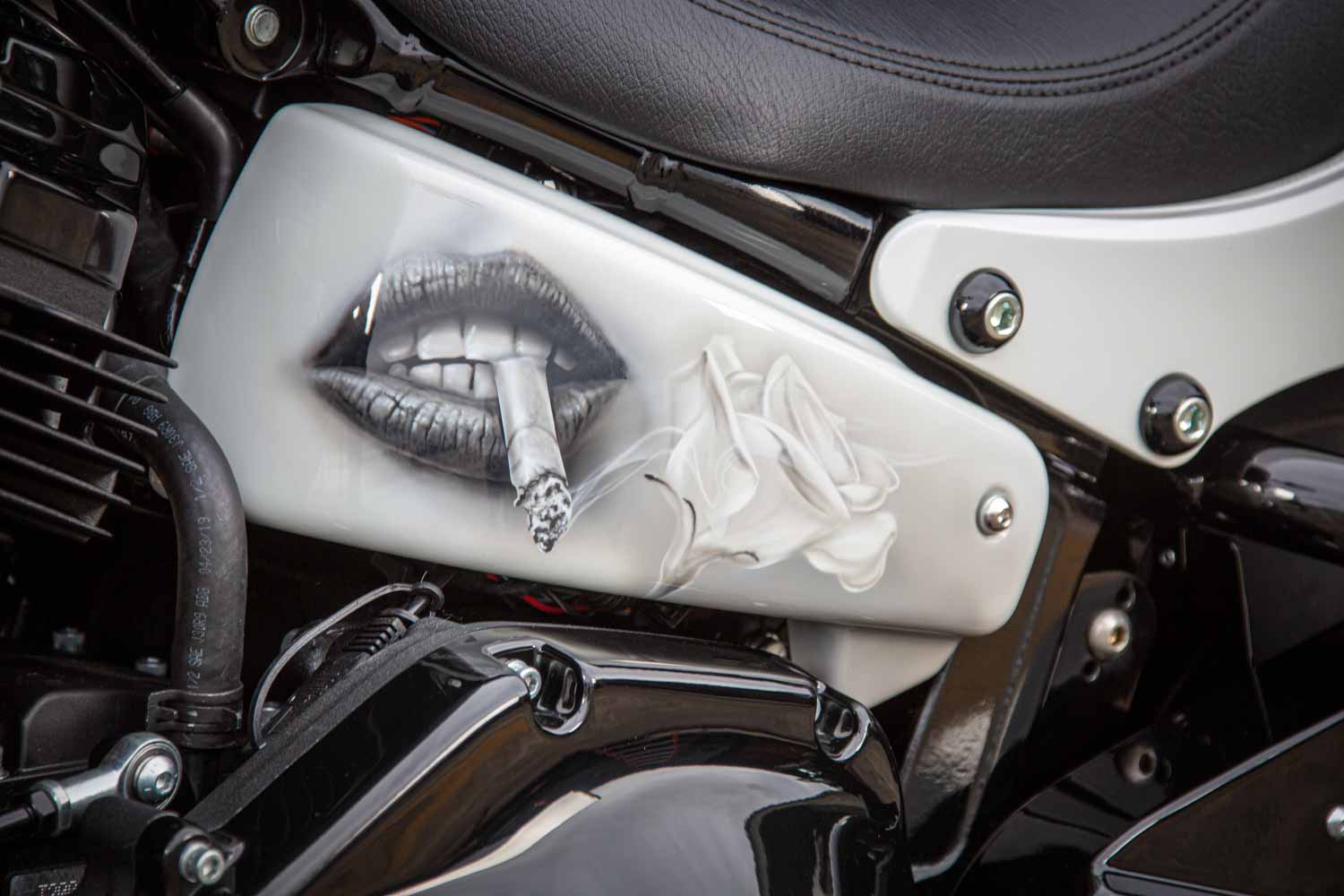 New tires also mean new wheels. Rick’s is well known for its in-house made wheels and has also made them for this build. The one-piece forged wheels can be found in the portfolio of the parts manufacturer under the name “Freestyle”. The matching brake discs are also Made in Baden-Baden and have the same name. To ensure the view of the design wheels stays unobstructed, the rear brake disc was located to the drive side.

Something else had to be made completely new on this bike, which is the rear fender, since now a much wider tire has to be covered. The fender is also made at Rick’s in small series. The original tank was elongated at Rick’s and now stretches in a soft curve over the cylinder. Technically this is of no significance, however, it influences the whole line of the bike positively. The front fender in comparison to the stock item is much smaller and was also developed at Rick’s specially for the Slim models. 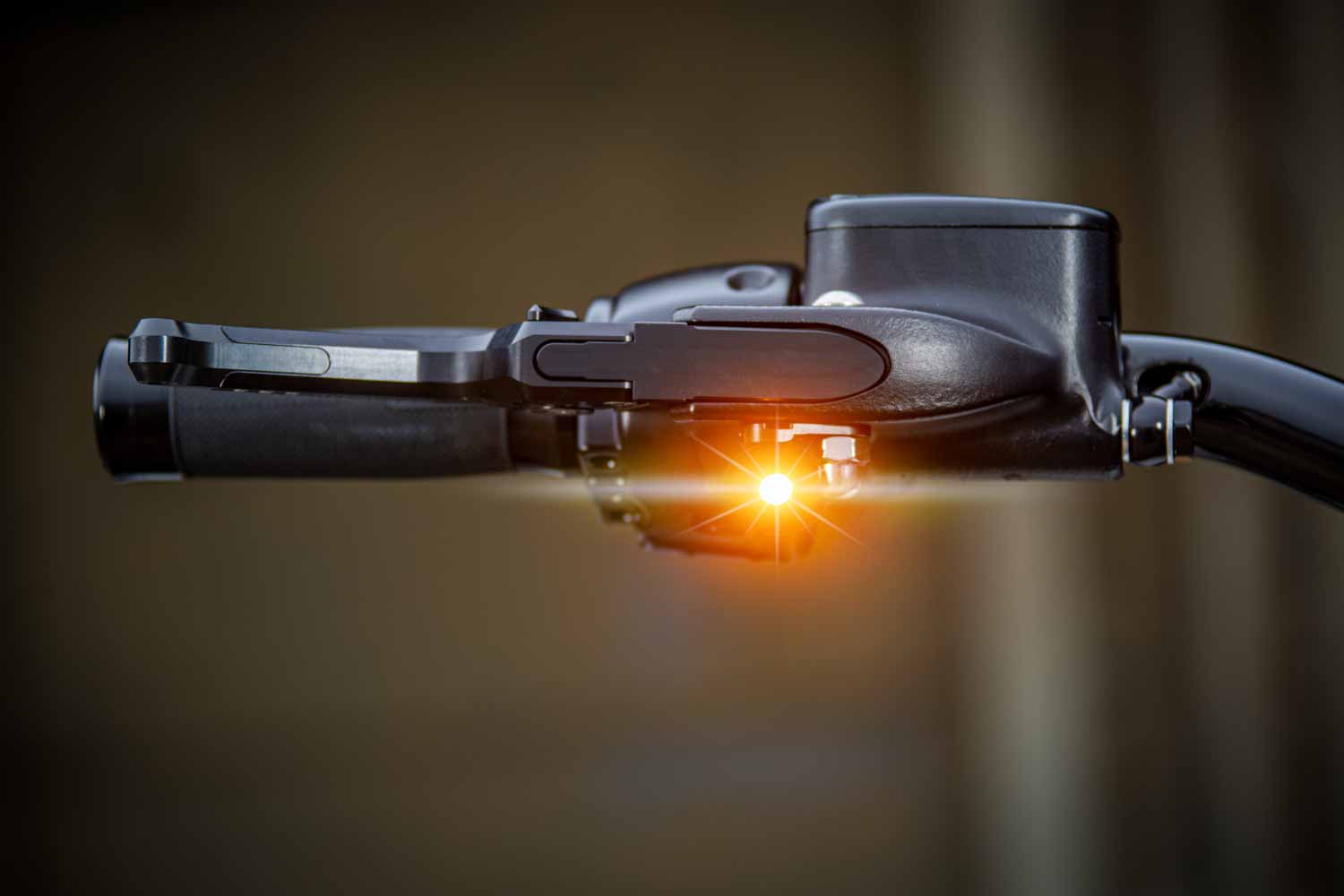 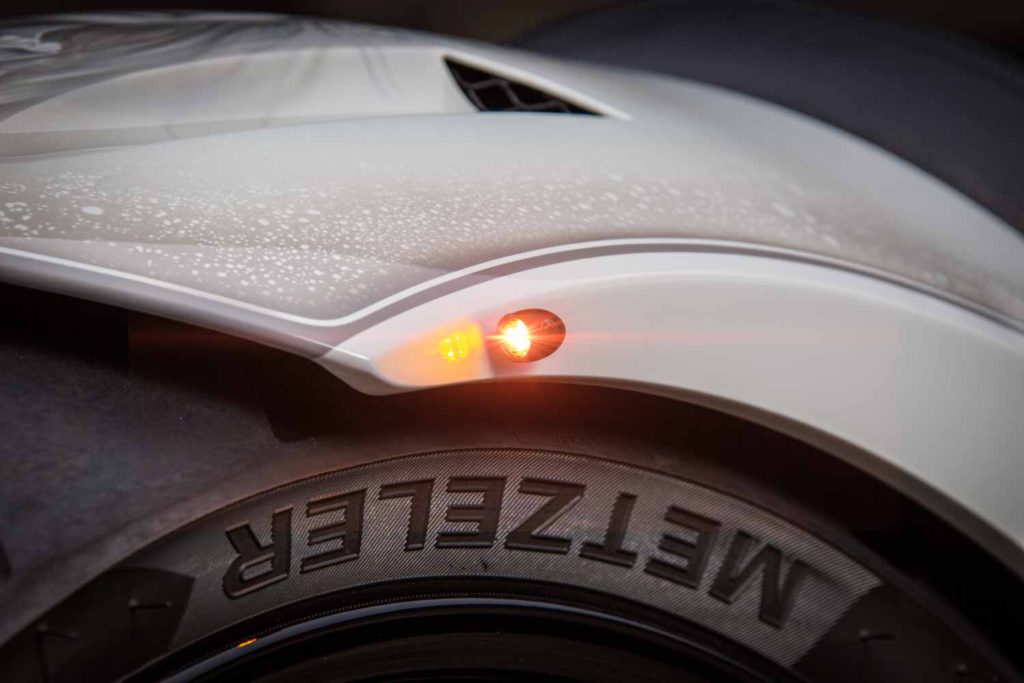 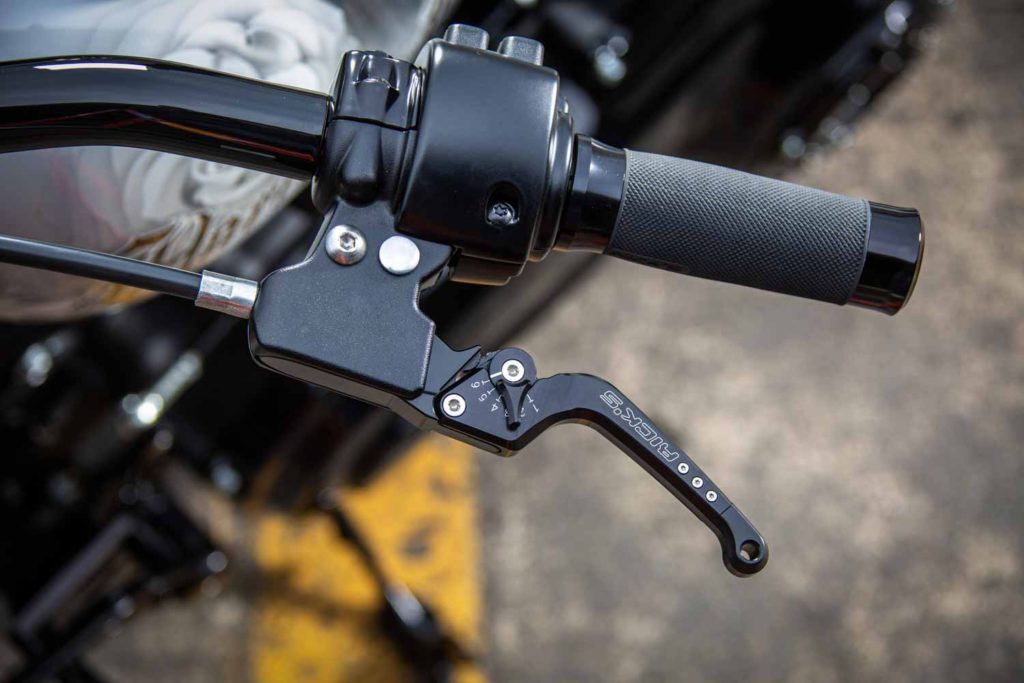 Let’s now look at the accessories. The handlebar is also from Rick’s production, as are the rubberized grips at the ends. Rick’s brake and clutch levers are also noteworthy. They are 6-step adjustable to adjust the distance between grip and lever, and additionally the lever length can be adjusted with the supplied end piece.

Another part from Rick’s is the air filter. Rick’s offers a multitude of different air filter designs which, thanks to air optimization, offer improved air flow. For this bike the air filter called “Spoke Black” was chosen. The adjustable exhaust system is from KessTech and can be used legally on the road. A new air filter and exhaust mean that the engine management has to be adjusted too. With a mapping the performance can also be increased, the torque raised and jerking at low revs eliminated.

The indicators are not Rick’s products. These are from Kellermann and called “Atto”, and at the rear the Atto DS is a 3 into 1 unit with integrated rear and brake light. The tiny parts have an E-test mark and can be used legally on the road. Only the holder for the front indicators was made by Rick’s and is fixed with the mirror screw, which places it almost invisibly below the handlebar.

The ladies’ portraits perpetuated in the paint job are being kept a secret by the customer, but we can reveal that he was more than satisfied with the result and has taken many bends with a broad grin on his face.