The Fat Bob models from model year 2018 come out of the factory looking fatter than the other Softails. At Rick’s Motorcycles the bike was given a 300 rear tire to make it an even fatter Fat Bob. This is not witchcraft, but has more to do with intensive development work and a complete rear conversion, so that the fat tire later runs centered and can be ridden without any problems. 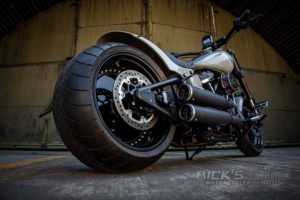 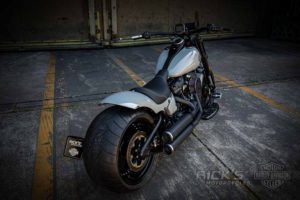 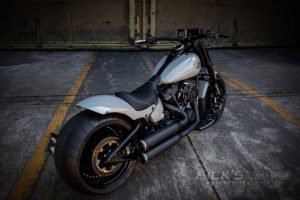 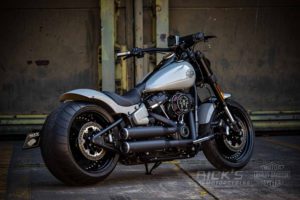 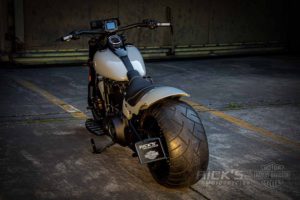 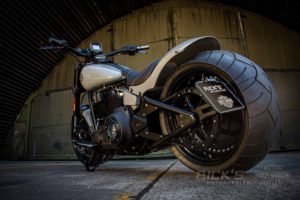 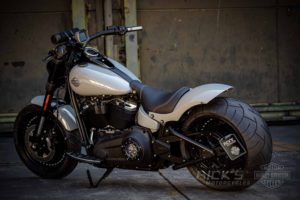 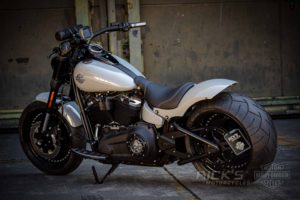 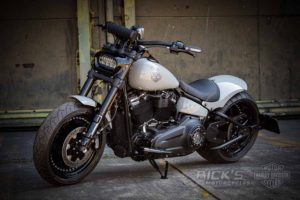 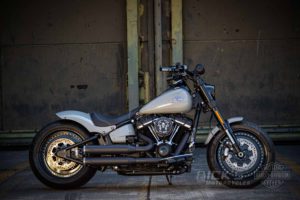 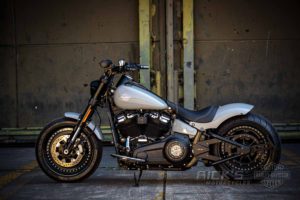 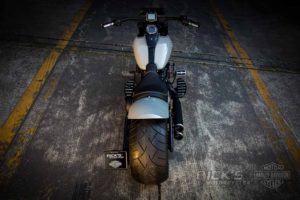 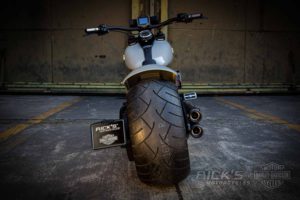 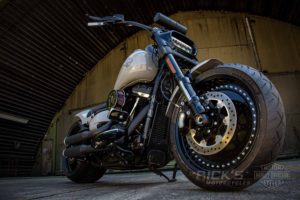 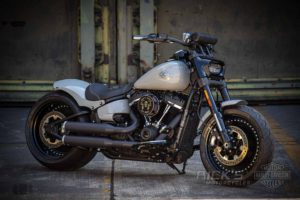 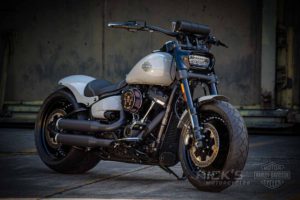 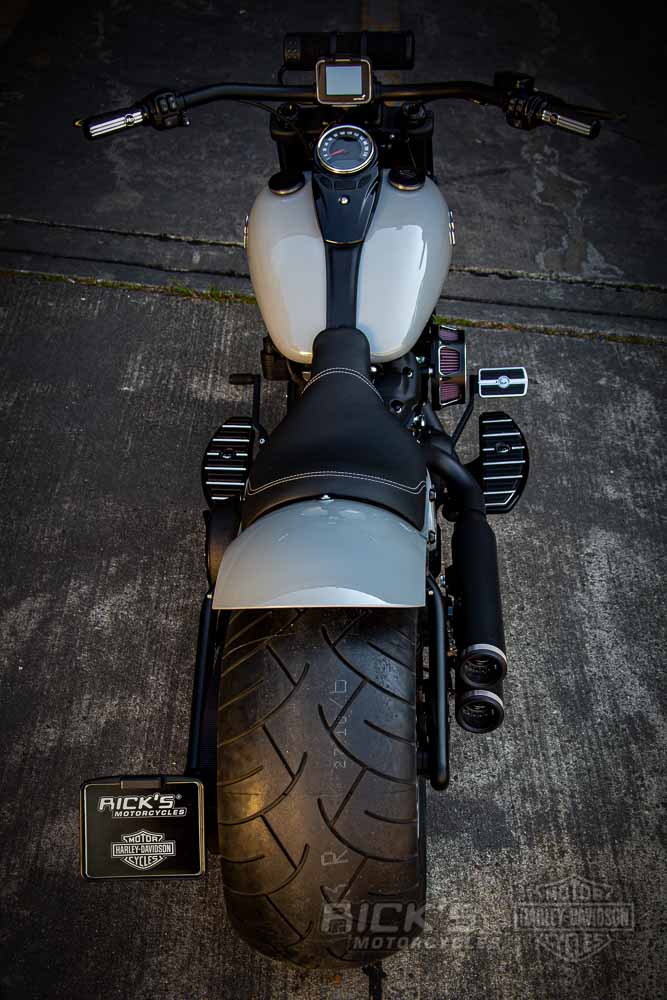 The 300 tire does not fit into the stock swingarm, and it is not possible to just widen it. The real problem is actually not a wider swingarm, but to lead the belt drive past the tire. At Rick’s Motorcycles it took the engineers several months to find the perfect solution. There was a so-called “diversion” swingarm available for the Twin Cam models up to model year 2017, but for the Milwaukee-Eight Softail models from model year 2018, this had to be constructed completely new. But instead of leading a single belt from the gearbox exit to the rear wheel, Rick’s has built-in an intermediate shaft and now uses two belts, one from the primary to the intermediary shaft on which a further offset pulley sits from which the second belt is carried past the tire to the rear wheel. 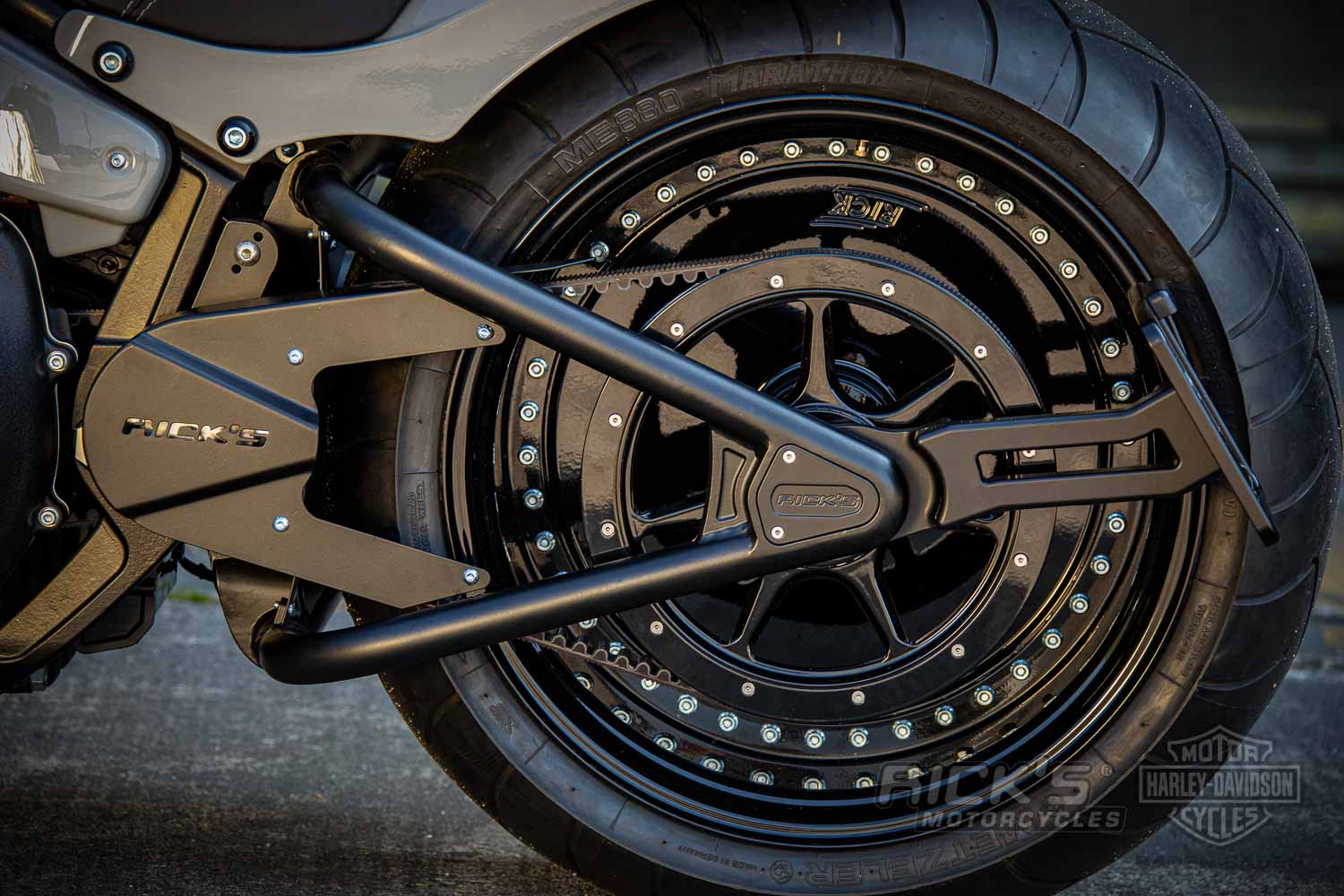 This may sound simple so far, but far from it. This system was not meant to just function somehow, but to work perfectly, and not only for a hundred or a thousand kilometres, but hopefully for the life of the motorcycle. It should, of course, also fulfil expectations design-wise and live up to the critical scrutiny of the German TÜV testers. By now this kit has also matured and is being made in small series production, and the Fat Bob on these pages is not the first Milwaukee-Eight Softail which was sent on the road with it. 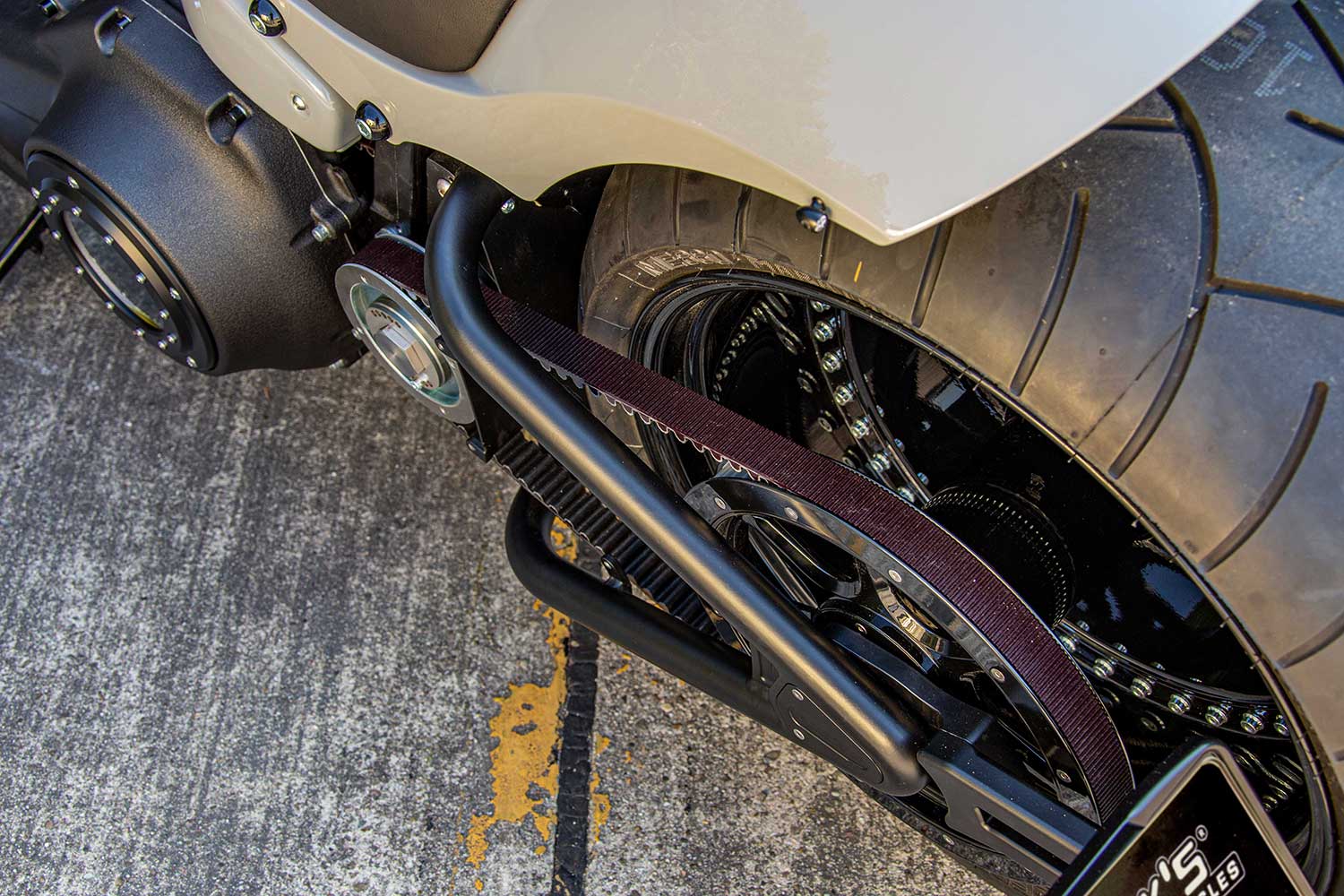 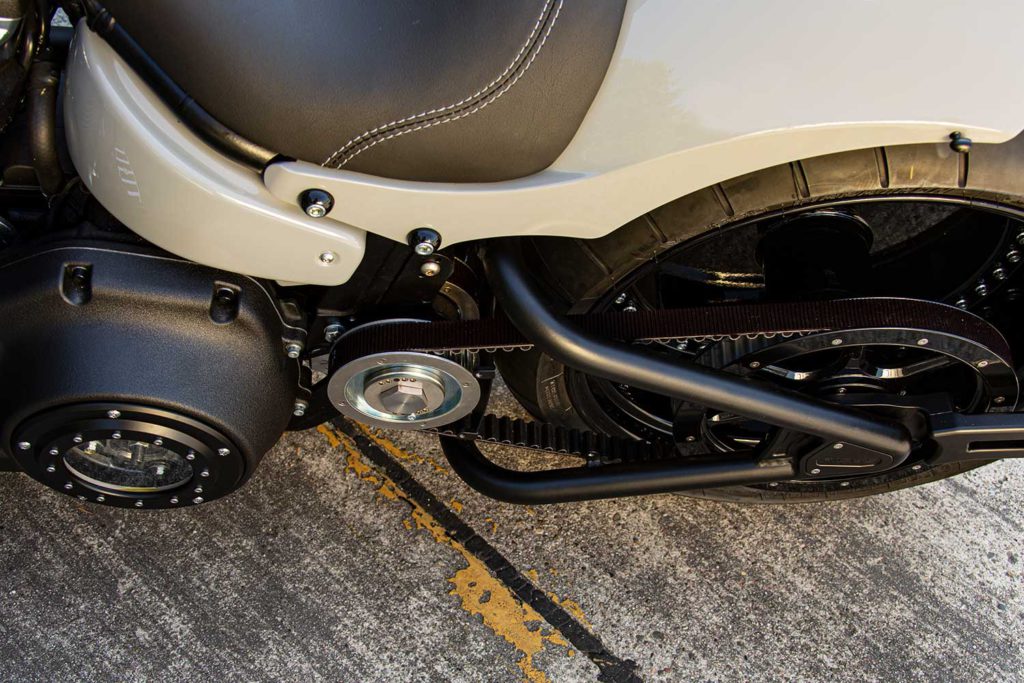 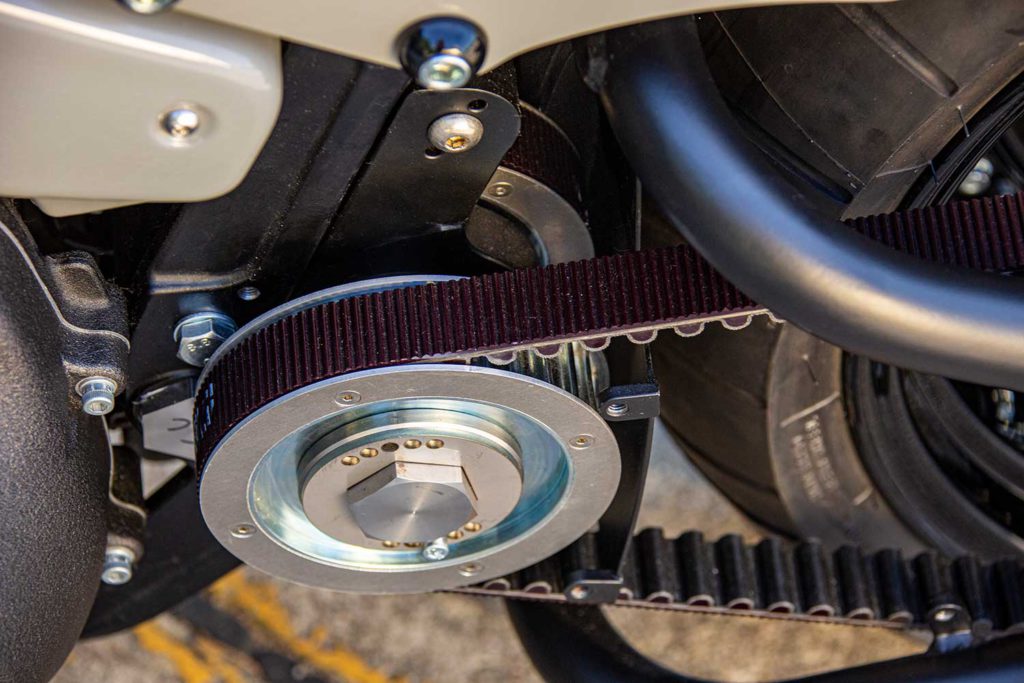 And how is the ride with a 300 tire? Because the tire sits exactly centered in the longitudinal vehicle axle, the handling in narrow and also wide bends at higher speeds is excellent. It is, of course, a bit heavier than a 185 tire, but still easy to handle. It goes without saying that the 300 tire does not fit the stock rim, and in this case the customer chose a set of 3-part disc wheels from Rick’s Motorcycles’ portfolio.

If you change the wheel, you have to also think about using a new fender as the stock version does not cover the new dimension any longer. Rick’s offers suitable in-house made steel fenders, which are available for almost all new models (Twin Cam & Milwaukee-Eight). The material strength was chosen so that also a passenger can be transported. This customer did not want an airride system, which is why the fender seems to hover unusually high above the tire. The distance is reduced when the rider is in the saddle, but it looks a bit odd without any load in these photos.

Now the question remains why the customer chose a Fat Bob as basis for a conversion instead of a Fat Boy? The answer is simple. The Fat Boy is an amicable cruiser, which is not only because of the chassis components. The Fat Bob has a completely different front end which stands out because of the new headlamp shape. In addition, the second brake disc comes as stock, which can be advantageous in higher gears or on mountainous roads. When all is said and done, this Fat Bob proves the abilities of the custom workshops in Baden-Baden… perfect into the last detail and stylish throughout, which is typical Rick’s!