Who said with a 360 tire you can’t steer well around corners? At Rick’s Motorcycles they have developed a patented swingarm kit with which up to 360 tire widths can be implanted easily, and their speciality is centering it. But more about that later, because Rick’s Harley-Davidson Fat Boy has far more to offer than just a 300 size tire. From the tank to the rear fender, to the wheels or the air filter, all was made at Rick’s Motorcycles, which makes this “Grey Friend” so special. 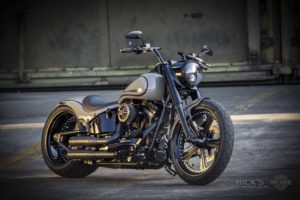 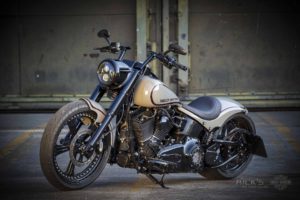 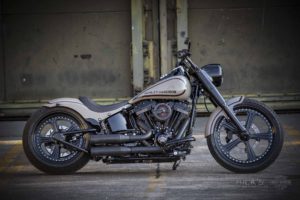 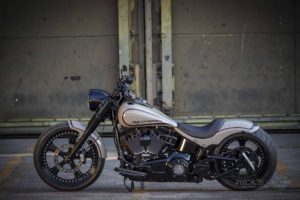 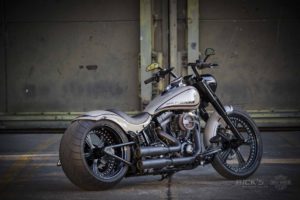 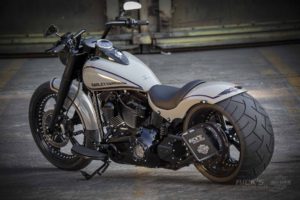 But before we go into the details, we would like to talk again about Rick’s offset swingarm, because simply changing the tire is not enough. The course of the drive belt is not meant for this XXL dimension and would hit the tire without taking precautions. Therefore the belt has to be re-routed to the outside. In the past the most adventurous constructions were tried out in order to achieve this offset. To elongate the drive shaft is, even with additional support bearings, not the solution, and also not the often seen idea to reposition the tire as far as possible to the right so the belt can be bypassed. Even a mixture of both is only a lame excuse. The claim that a wide tire in this dimension is no longer rideable is mainly based on these constructions. If the rear tire is offset from the axle center, then you get a second trail which runs offset to the front wheel. Apart from running straight very badly, the next bend will cause a problem and steering will be really difficult.

At Rick’s they have developed a swingarm system with which the tire runs exactly in the center. The belt is exchanged for two shorter ones, whereby the second one is offset to the outside with an intermediate shaft. But what sounds easy in theory is much more complicated in reality. In order to redirect the torque power of a US V-Twin reliably requires technical know-how and a lot of experience, of which at Rick’s they have both. By the way, this system is not only patented but also has German TÜV and is therefore legal on German roads. 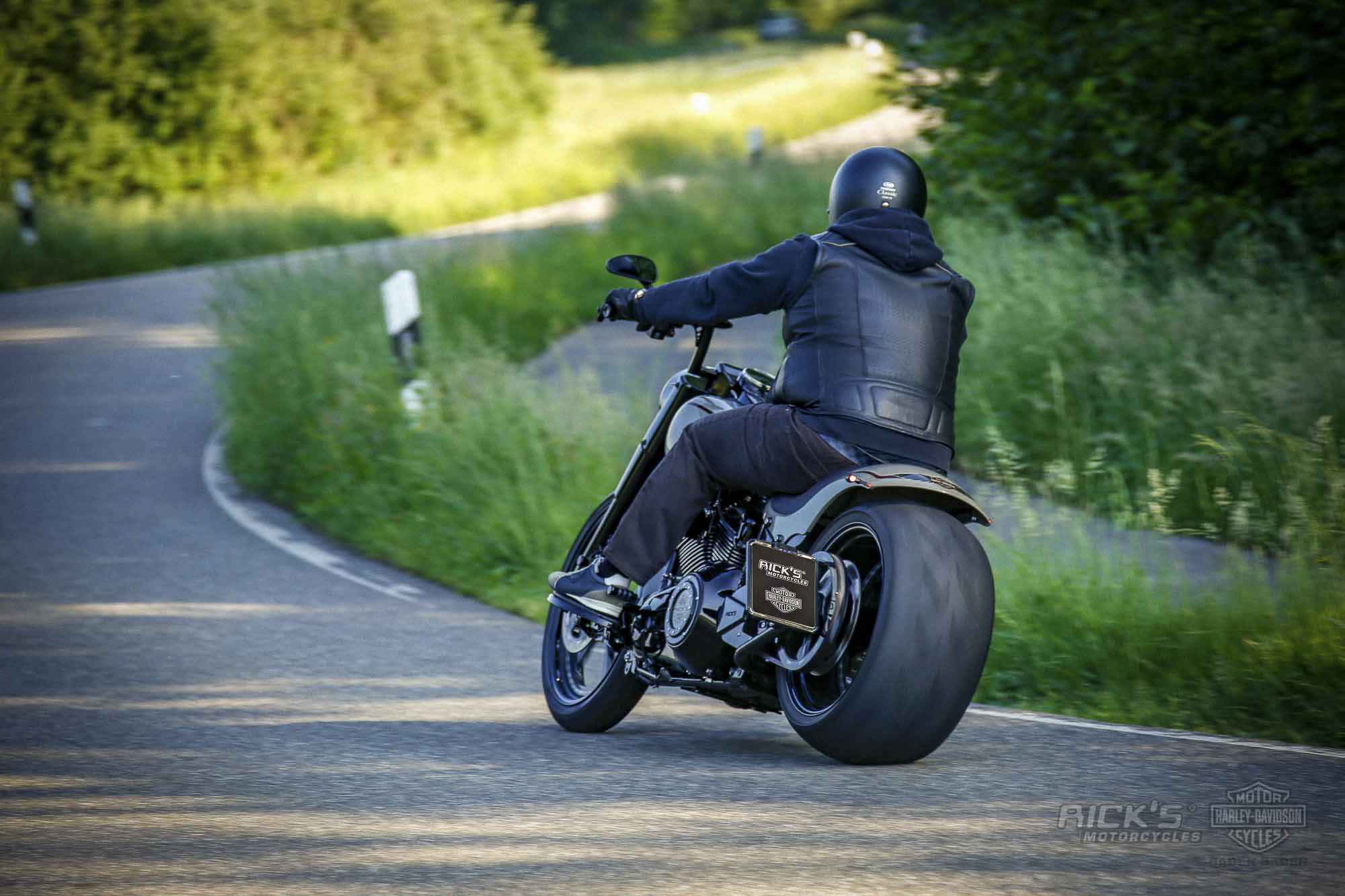 Obviously, the tire doesn’t fit the stock rim any longer, but Rick’s has countless wheel designs in their program which come in almost all dimensions. The wheel design used here is called “Gimmi 5” and for this build was ordered as a 3-part, screwed together variant in deep black. So, new swingarm, new wheel, new wide tire…and so the stock fender doesn’t fit any longer either, but at Rick’s also this poses no problem. The customizers from Baden-Baden have various fender kits for all Softail models in their program with which not only the wheel gets covered, but they also enhance the look.

The lines of a bike are very important to Rick’s customizers as this eventually affects the total look of a custom bike. In order to achieve this, Rick’s Motorcycles likes to apply a further trick, which is the tank. The typical Fat Boy stock tank is not ugly and matches the trim perfectly, but doesn’t necessarily match a custom bike with perfect lines. At Rick’s in Baden-Baden they weld an elongation onto the OEM tank, which is then positioned so that the bottom edge stretches in a soft bow over the cylinder head cover. The line of the rear part is thus continued in the shape of the tank. 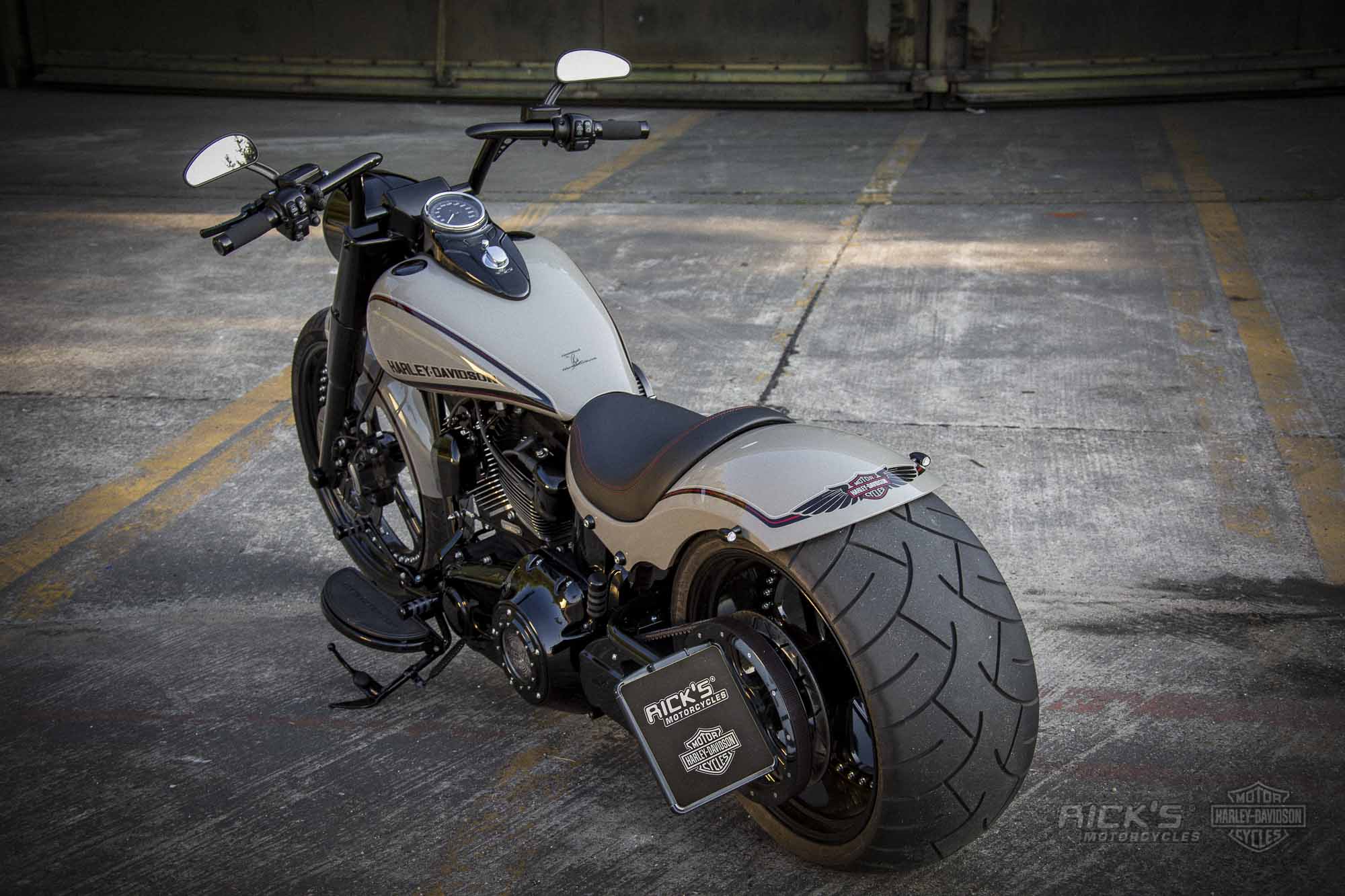 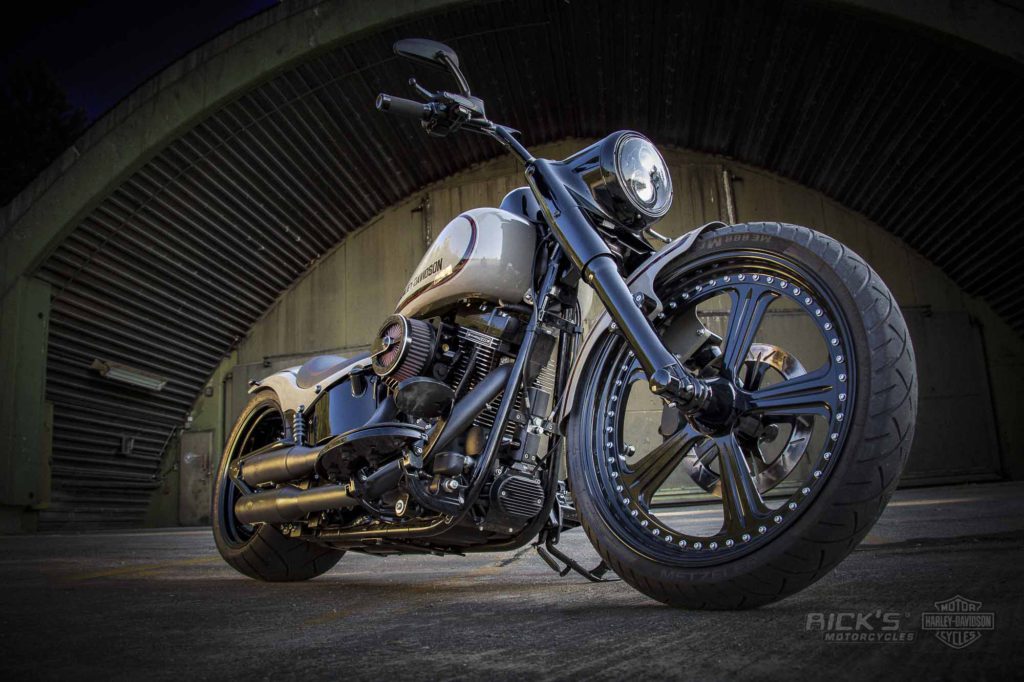 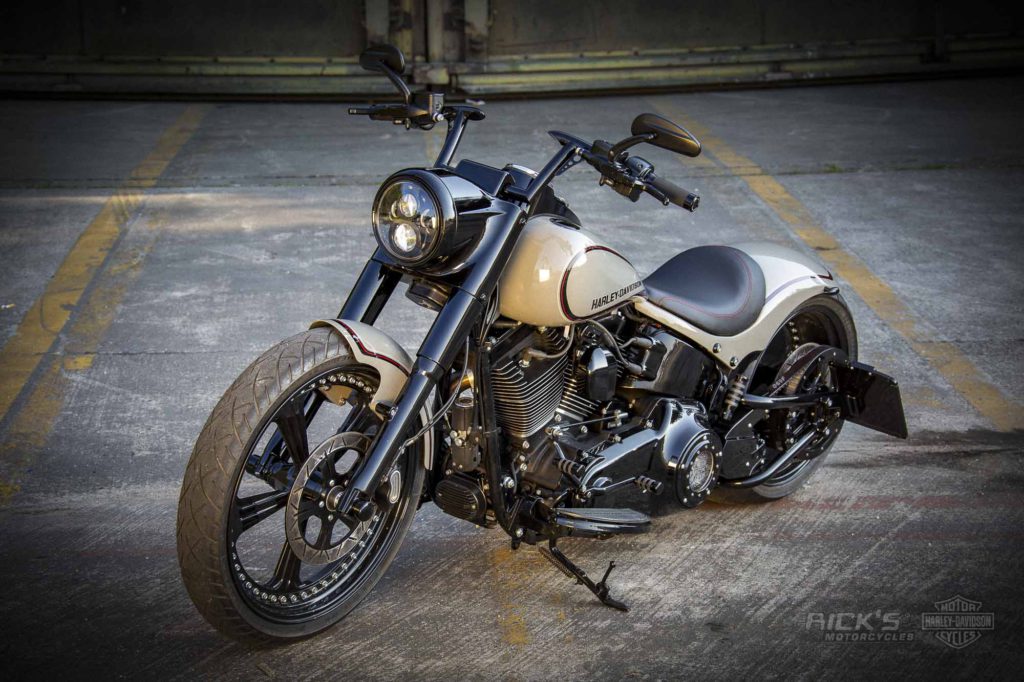 The elaborate work has so far been explained here, but as so often in life, with custom bike building it’s also the details that make the whole piece of work perfect, and at Rick’s they have a lot of parts in the program that could be the icing on the cake on a Rick’s custom bike.

On this Fat Boy, for example, brake discs are used which are matching the “Gimmi 5” wheel design, and foot controls and grips are also Made by Rick’s. The same applies to the adjustable brake and clutch levers. The handlebar also deserves a closer look, which was developed for Touring models, but also looks good on this bike. The side licence plate holder is also from Rick’s, as is the “Good Guys” air filter and many other detail parts. A good sound is ensured by an adjustable exhaust system from Kesstech, which was ordered in matt black.

The whole custom job is very typical for Rick’s, perfect and matching in all respects and every detail. A technical masterpiece which stands up to any comparison.