Who would have thought in 1990 that a motorcycle with disc wheels, V-2 engine and rather low seating position would once become such a huge success story lasting over 30 years? Certainly a lot of people in the Harley-Davidson community, including one particular Harley customizer and builder in Rastatt, who would soon write his own history with the widening of the first-generation “Fat Boy” disc wheels: Patrick “Rick” Knoerzer. More than three decades and two new engine series have passed since the silver and chrome flashing original “Fat Boy” with the striking yellow trim stripes on the cylinder head, but the spirit of the “Terminator bike” from the Terminator 2 blockbuster movie is still alive. Especially in the highly modified conversions by Rick’s Motorcycles, Fat Boy’s of all model years that have been extremely refining and re-defining the “Fat Boy” for decades, but never questioned the character of the model itself: Even with a set of Rick’s design wheels this 2022 model year “Fat Boy” remains recognizable as FLFBS! 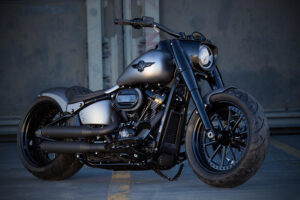 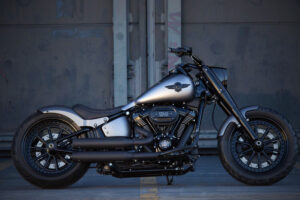 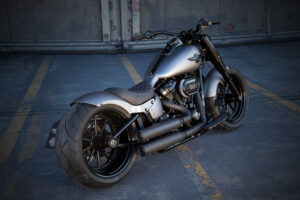 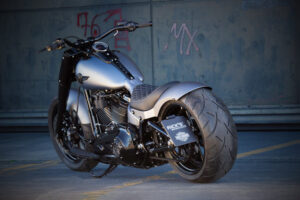 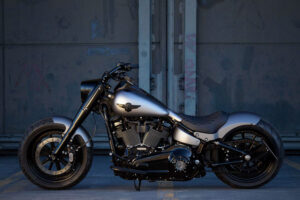 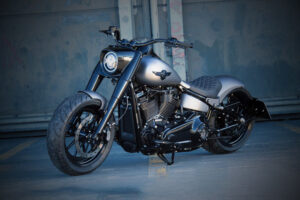 The three-piece assembled 10-spoke “Steve” design wheels are less “bulky” in style than the massive discs of the series – although these were sometimes perforated with cutouts or holes, sometimes milled more filigree in the course of the models history: The “Steve” design wheel is one of Rick’s classics and comes, naturally, with matching brake discs and belt-pulley. The rear 9.0 x 18” wheel size allows the mounting of a 260 Metzeler tire in the rear – in the stock swingarm of the 2022 Milwaukee Eight FLFBS. As “standard” at Rick’s, featuring Air Suspension. To give the observer a clear view of the right side of the wheel, brake rotor and caliper are relocated to the left: behind the pulley with Rick’s Side Drive Braking System. A clean solution!

The massive rear rubber is perfectly highlighted by the compact Rick’s full-metal tailend, additionally supported by established Rick’s parts like side-mounted license plate bracket and belt guard. Continuing on the drive side, Rick’s “porthole” cover allows an “inside” view into the clutch rotation and primary drive. This Rick’s cover is available for almost all Harley “Big Twin” models. 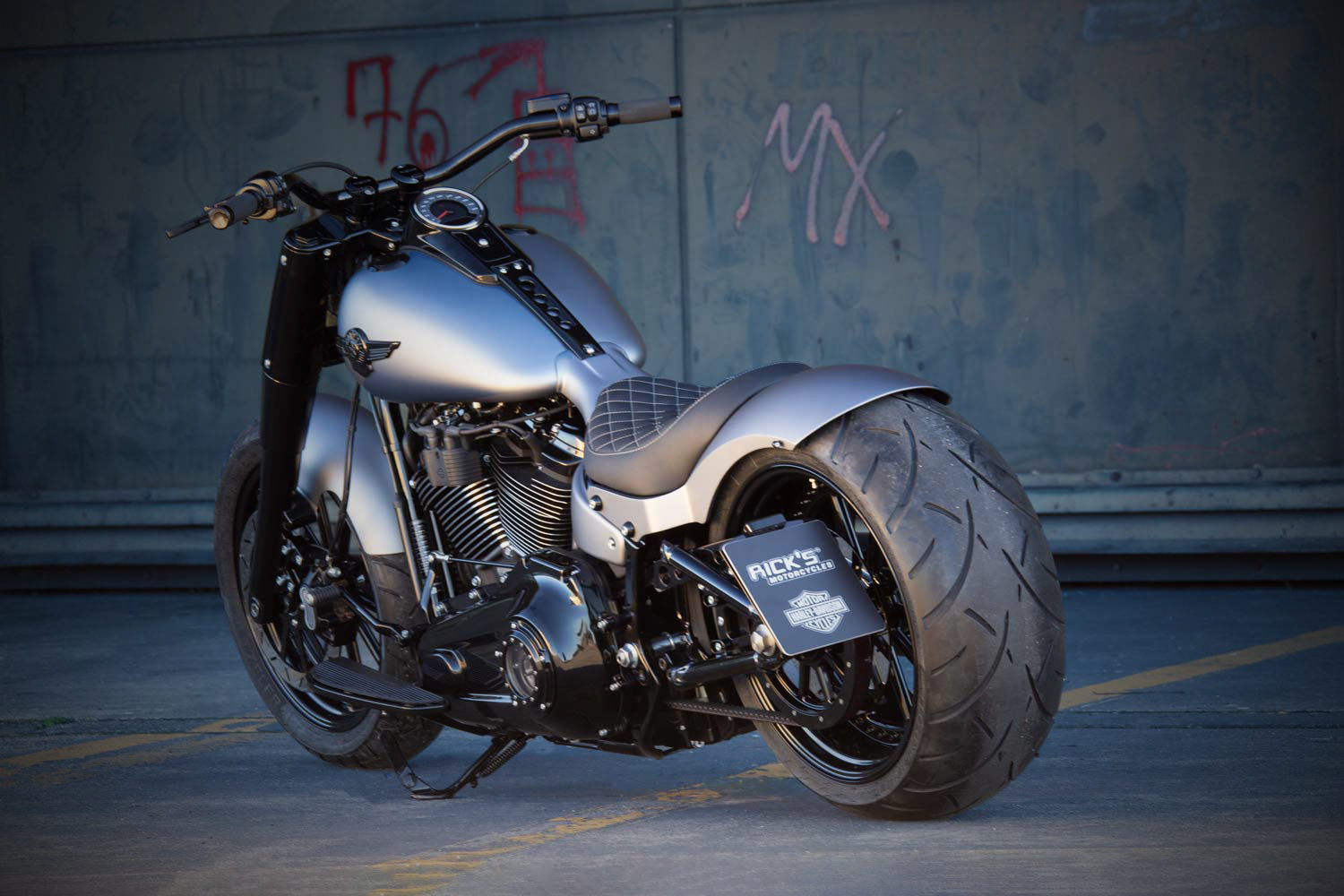 The front wheel is again topped by a Rick’s sheet-metal fender: much tighter fit and cut much shorter than the stock, it gives more view on wheel and tire as well as added stability to the stock fork, which is now topped by Rick’s-made risers and handlebars. Adjustable hand levers and “Good Guys” grips from the Rick’s program improve the handling of the custom version. In addition to the fork and running boards, the iconic tank was also retained from the original “Fat Boy” look: With this conversion, the single seat created during the tailend conversion is visually connected to the stock fuel tank with a tank-seat cover – a later tank extension by Rick’s sheet metal workshop not excluded. 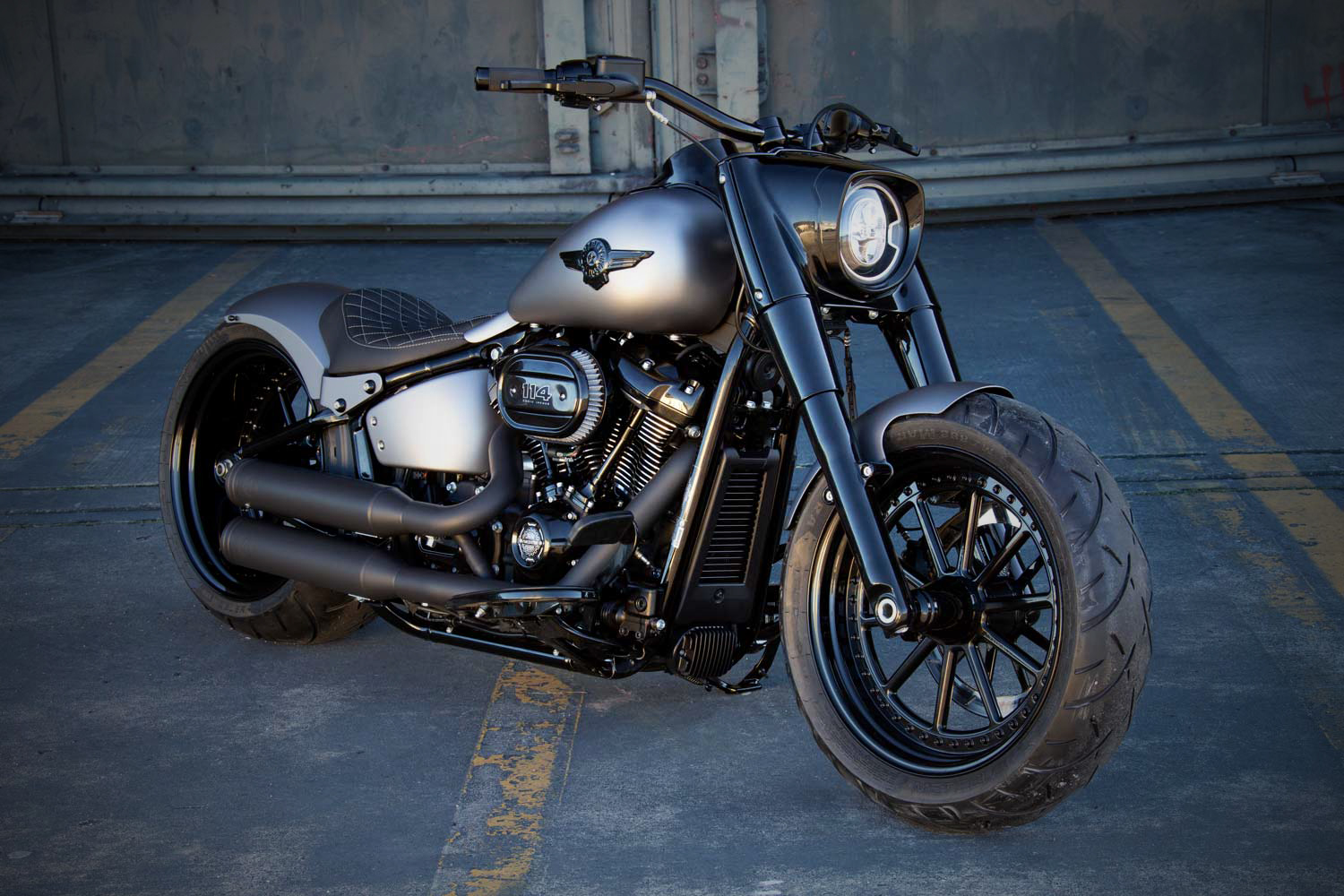 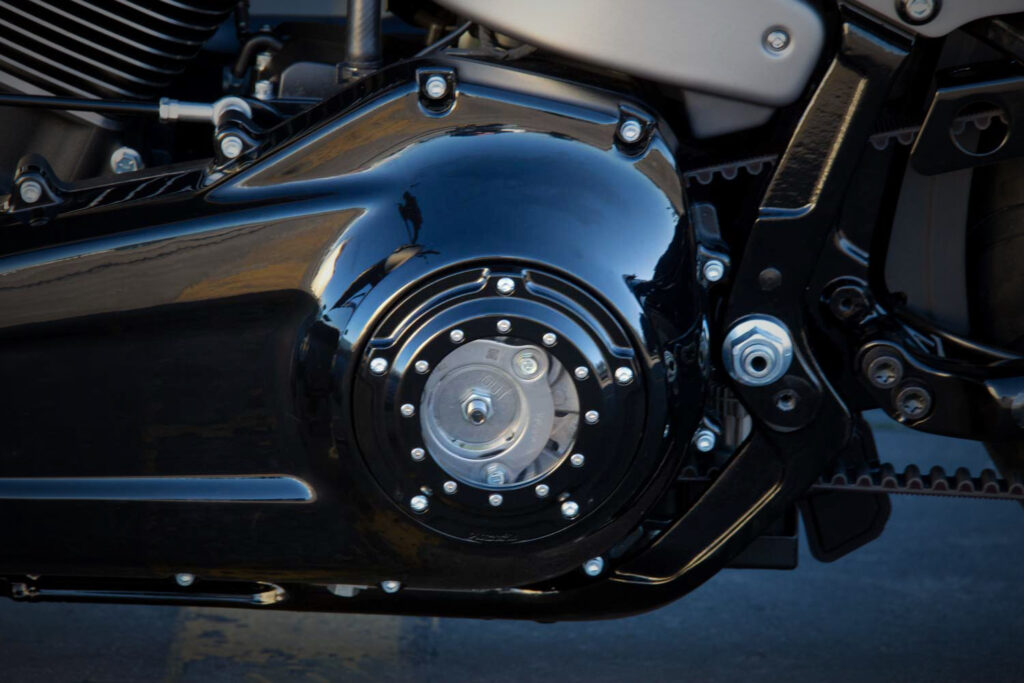 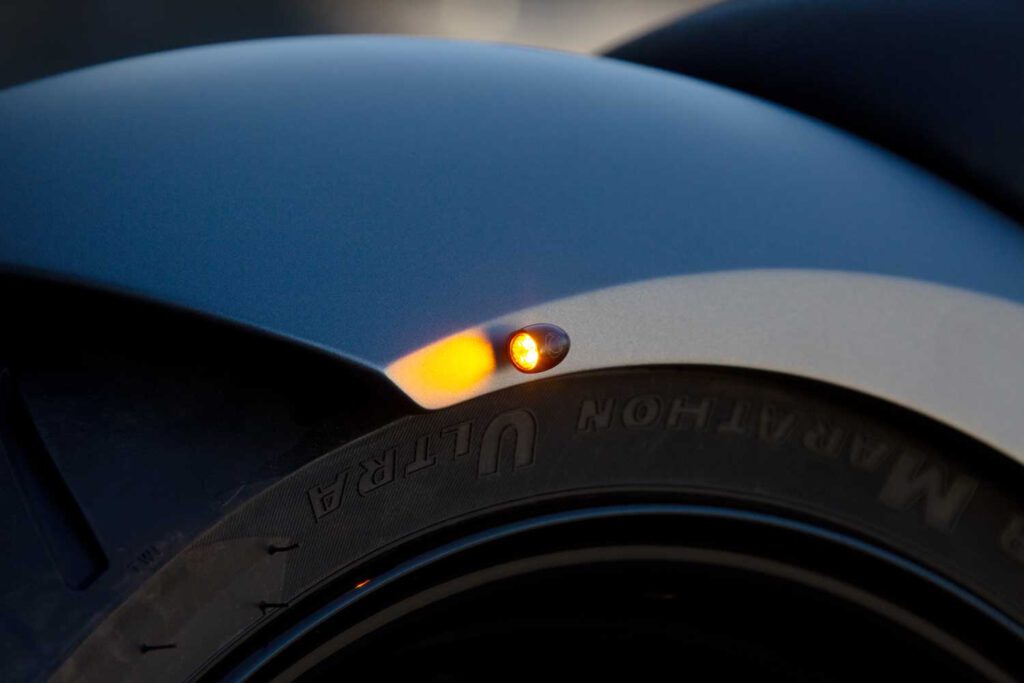 If anything else, this particular color scheme shows the evolution and changes in customer taste: Apart from the silver base coat, all parts that would have shone in the sun as chrome or polished in the past are now black: Black wheels, black fork, black tank badge, black engine, black exhaust – painted or powder-coated. Which makes the accents stand out even more. Like a “negative” of the original Fat Boy – but certainly in the positive sense.

Even an reminiscence to the yellow-colored cylinder head covers comes to light, when the Kellermann Atto 3-in-1 Indicators reflect their ultra-bright LED shine in the matt-silver tailend. What hasn’t changed in these decades is the desire for more sound and more power: A KessTech system and a visit to the in-house test bench at HD Baden-Baden check these positions on the “to-do list”. Maybe someone will send some pictures to California? The last version of the “Terminator” movie series has certainly not been shot yet – not as long as “Arnie” can still take a handlebar in his hand: “I’ll be back” also applies to the Rick’s Custom Fat Boys of the model and customizing year 2022!