Time and time again the boys from Milwaukee are offering Sreamin’ Eagle special models. Made in small series, these bikes are absolute gems, which were often sold out in the past before they even got to a dealership. These bikes are modified stock vehicles which received in-house parts to spruce them up. If you were lucky enough to get your hands on such a bike, you can be sure to call a very special Harley your own. And really nothing much needs changing on such a bike in order to make it unique, but at Rick’s they gave a Screamin’ Eagle Softail with a few modifications a little more extravagance. 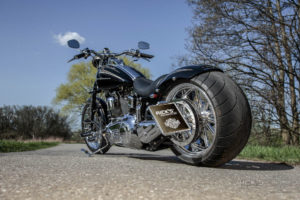 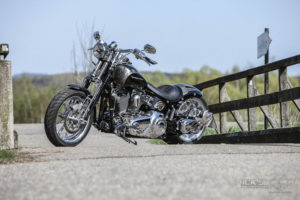 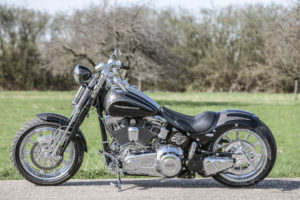 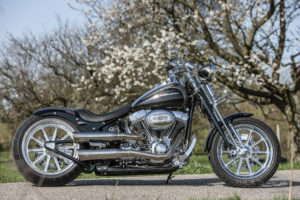 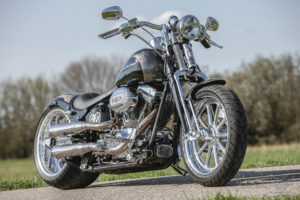 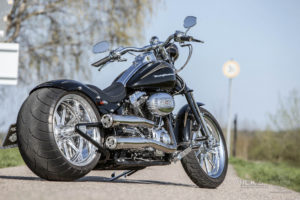 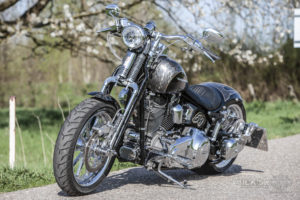 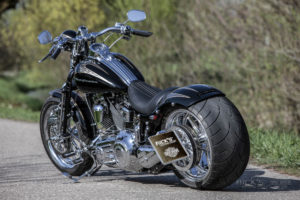 The guys from Baden-Baden knew what a sought after special model they needed to customize, but the boys around Patrick Knörzer know how something good can be made even better, and something pretty even prettier. The main change was the wide tire conversion, and if you addressed this subject before in detail, you will know that the biggest problem with such modifications is to lead the secondary belt past the wider rear tire. In the past the most adventurous constructions were tried out, from spacers and different offset kits to repositioning the secondary drive to the right side of the bike. The problem arises when the center is taken out of the middle of the bike or longer offset shafts cause leverage problems.

Rick has for all these problems a simple but well-defined solution, which allows to center the rear wheel without changing the center of gravity. If the desired conversion cannot be realized with a belt, a second one is being used, which is then led past the wheel, and an intermediate axle in height of the swingarm axle steers the belt drive. This simple but perfect system has become a bestseller during the last few months, and in this case it was possible to put a 300 tire into the rear without having to make serious changes to the stock bike.

In order to regulate the height of the bike a Legend airride system was installed, and despite the fact that the team from Baden-Baden is known for their unusual rims, at the front the stock Harley wheel was left on this bike. At the rear of the bike, however, due to the tire width, a new wheel was needed. Taken from in-house stock, the selection was a 10.5 inch forged wheel named ‘Steve’, which was then combined with Rick’s drive side brake, and the brake components were placed directly behind the drive pulley. That the original fender now didn’t fit any longer goes without saying, but giving it a new one was no problem either, as was making a new seat.

The engine already had from stock only the finest Screamin’ Eagle parts added, although it would have been possible to increase the existing performance, but it really is enough. Only the complete exhaust system was changed and replaced with one from AS-Industries, to which only a few minor modifications were made.

In this case it was again an enormous advantage to have a good in-house custom painter, and Wild Air Hörby ensured that the bike received a most fitting paint job. From the start Rick and his team didn’t intend to create just another custom bike, but to keep the original Screamin’ Eagle style and only add a bit more individuality with a few cool features to what this Harley special model already had.