Custom Chrome Europe is one of the leading catalog companies for Harley-Davidson aftermarket parts in Europe, and original Rick’s parts are considerable in the extra thick Custom Chrome catalog. For years the company in Grolsheim has come to appreciate the perfection and reliability of the parts specialist from Baden-Baden. The introduction of the 2018 Milwaukee-Eight models was for all parts manufacturers a big reset to zero and then start again. The new Harleys were different, nothing fitted any longer, everything had to be newly designed and produced. Rick’s Motorcycles was the first company that created new custom parts for these completely new Softails. The first side licence plate holders were already presented a few days after the model presentation and shortly after followed wheel covers and complete rear parts with seat base plate, headlight masks and finally also foot controls.

When Custom Chrome approached Rick’s to build a bike together, they were well prepared and could refer to a large portfolio of parts, which has already been tried and tested on many Milwaukee-Eight Softails. Rick’s parts program would have been enough to build this Breakout only with parts from Baden-Baden, but this was not the intention of this cooperation, instead they wanted to build a bike made up of parts from the Custom Chrome catalog and additionally with parts and components from Rick’s. 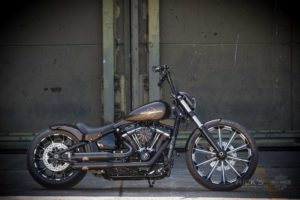 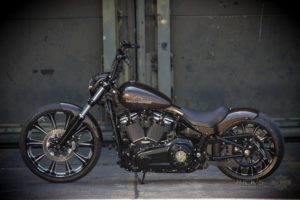 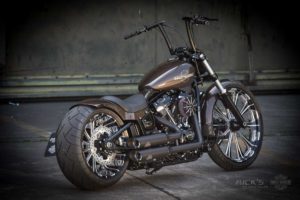 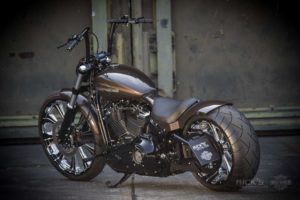 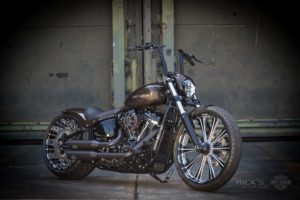 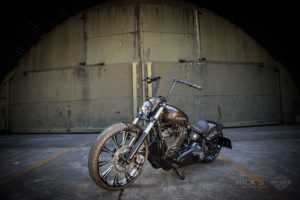 Although Rick’s Motorcycles stands for high quality design wheels, for this project it was decided to use somebody else’s, namely Performance Machine wheels from their Contour Collection in Platinum Cut. At the front is a 3,5 x 23 inch and at the rear a 9 x 18 inch Made in the USA. The extreme contrast between the black and the blank polished surfaces is especially impressive, and Rick’s wheel covers fit of course the contour of the wheels. The steel rear fender can be ordered from Custom Chrome or direct from Rick’s and included are a mounting kit and the seat base plate. In order to conceal the gap between the tank and the seat, Rick’s developed a special tank cover which hugs the seat on one side and the tank on the other. The foot controls are also Made by Rick’s, and especially taller riders will appreciate the two-inch longer version. Rubber O-rings reduce the risk that boots slip off the controls, and the black, polished surface matches the black surfaces on the bike.

A further, relatively nondescript detail on this bike should however be noted, which is the headlight mask. While the stock headlight looks good and gives a brilliant light, the design was not further thought out by the Company. Latest when looking at it from the side, the stock part with its ribbed look seems less than perfect. Rick’s mask conceals this weak point in a simple way and was one of the first parts which were developed in Baden-Baden for the Milwaukee-Eight Breakouts. 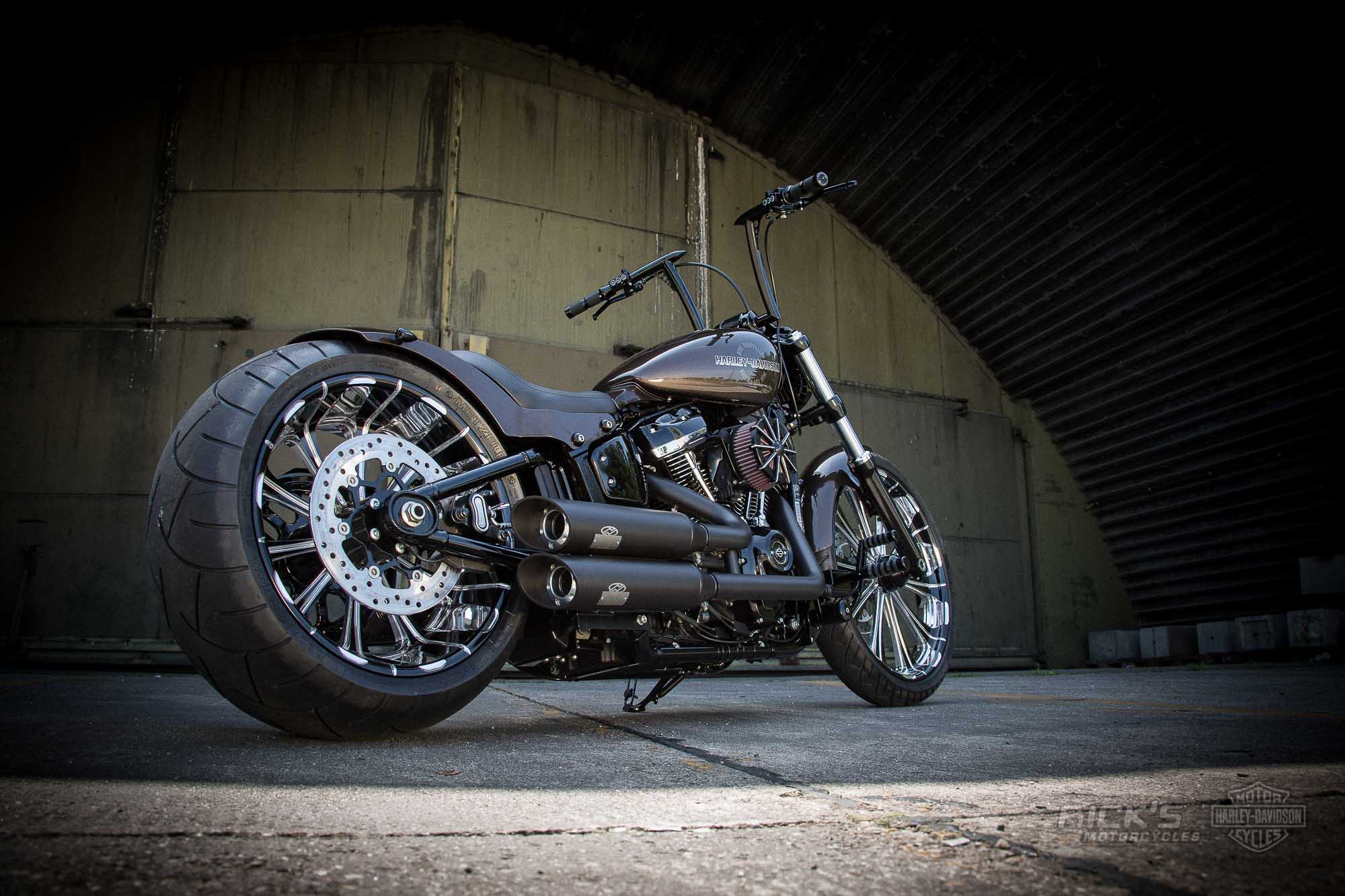 That Italians traditionally know a thing or two about design is a well known fact, and it was clear that this Breakout was to receive grips and instruments Made in Italy, and Rebuffini parts can now be found at both ends of Rick’s handlebar. The latest generation supports the Can Bus on all Harley-Davidson Dyna, Softail and Sportster models which were made between 2011 and the latest model series. With six illuminated keys, almost all functions can be carried out, and in addition to indicators and lighting also activation of the ignition and the starter motor.

Rick’s design air filters are also available for the 2018 models, but for the Custom Chrome Breakout it was decided to use the “Spoke” model in the two-tone version, which matches the bicolor wheels. 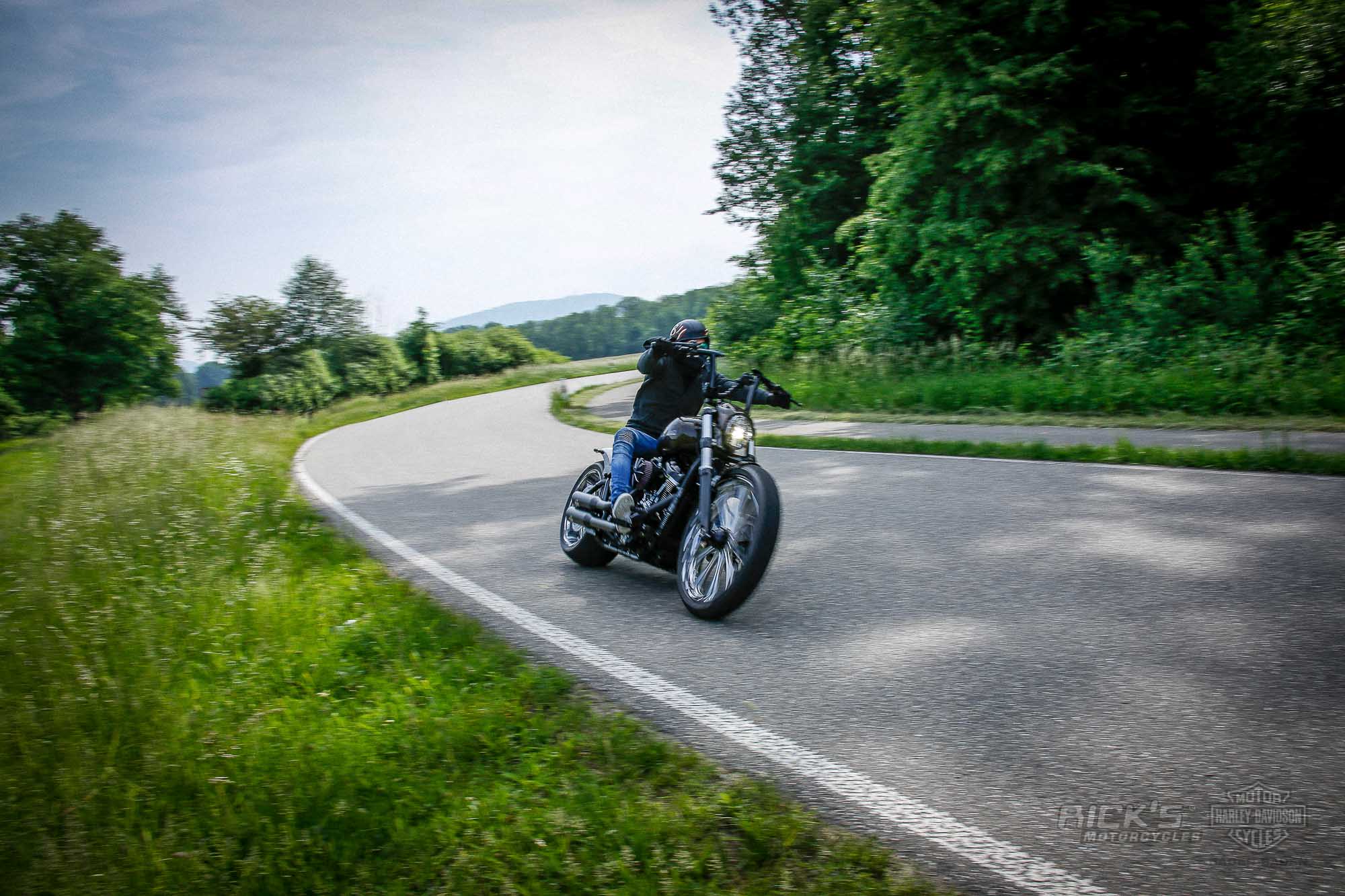 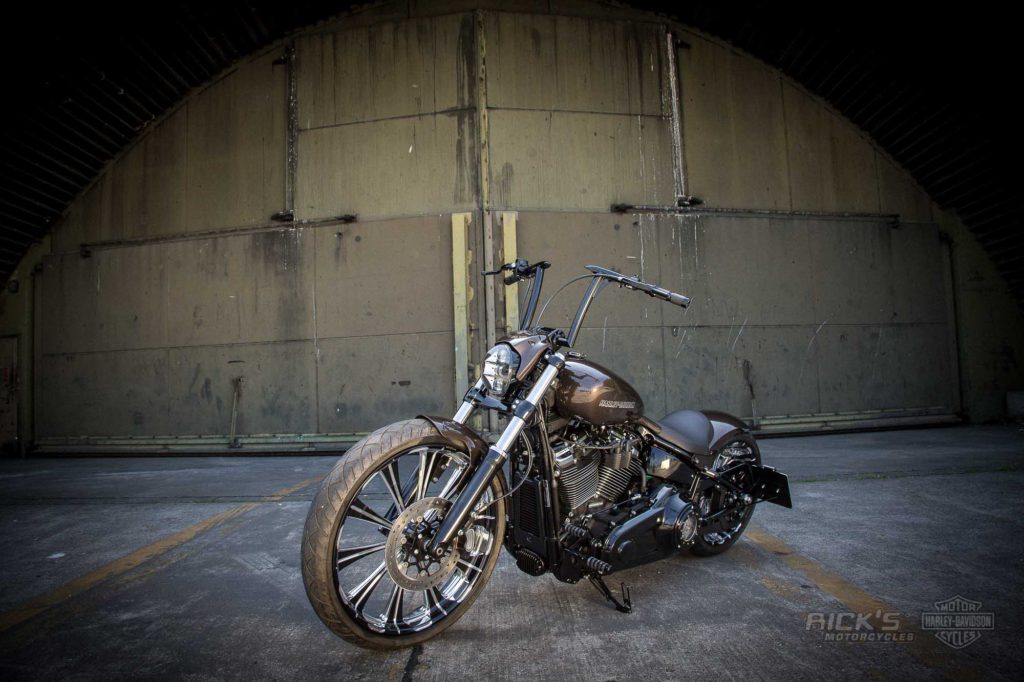 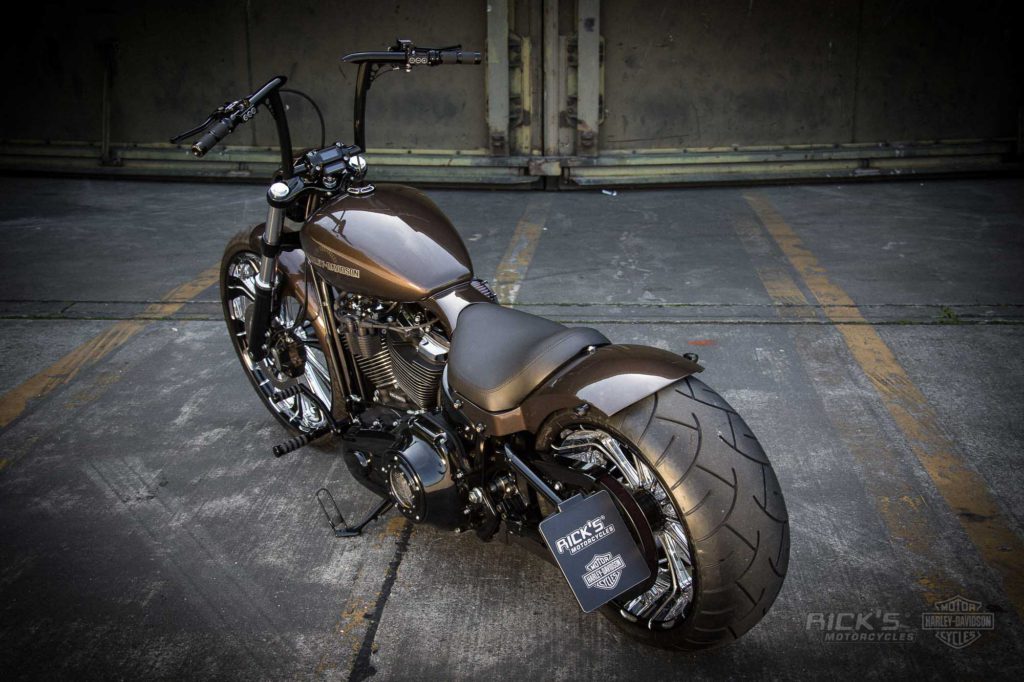 Since this year, the Custom Chrome catalog also carries Jekill and Hyde exhaust systems, so no question that these were first choice for this bike. The adjustable systems are also already adjusted to the new Milwaukee-Eight engines and thanks to EGABE legal on Europe’s roads.

The whole build was carried out at Rick’s Motorcycles in Baden-Baden, and the parts from Rick’s portfolio as well as the ones from the Custom Chrome catalog underline the “bolt on and ride” idea. Maximum quality and optimal fit of the parts enable the trained hand to build the bike without needing too much patience, and the finished bike is quite impressive. The Breakout was handed to the aftermarket specialist quite a while ago and the boys have racked up the first few kilometres with it. We eagerly await their feedback if they had as much fun with the Breakout as we did when doing the first test rides!